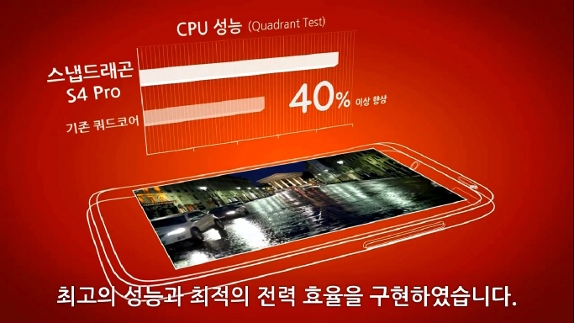 LG Korea has posted a new video and a new teaser site for their upcoming quad-core smartphone with Snapdragon S4 Pro processor. Qualcomm announced yesterday that they would supply Snapdragon S4 Pro to LG for a new quad-core smartphone. This video doesn’t explain much, other than the CPU and GPU. From the blank spaces in the site, we can expect 5 more videos in coming weeks that might reveal details about the Camera, Display and Battery of the device.

It would use Snapdragon S4 Pro APQ8064 processor with Adreno 320 GPU that would offer superior performance than the current quad-core phones. According to the earlier rumors, it is expected to come with a 13MP camera and 2GB RAM.

LG’s quad-core phone is expected to launch in Korea in September with the global roll out followed by that.

Source: LG | Via: The Verge