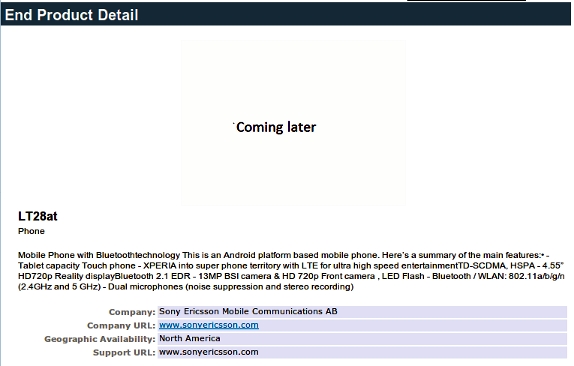 Sony Ericsson LT28at specs has surfaced via Bluetooth End Product List. It is expected to head to AT&T which is clear from the code name LT28at. It would feature a 4.55-inch ( 720 x 1280 pixels) HD display, 13MP camera with LED flash and a 720p front facing camera. It would also come with LTE support and Dual microphones (noise suppression and stereo recording).

This is expected to come with 1.5GHz dual-core processor according to the earlier leak that is similar to the Sony Ericsson Xperia Arc HD (Nozomi), but it differs completely in terms of display size and the camera. Still it’s not clear if it would have HDMI port like the Nozomi. There is no image of the phone yet but Sony Ericsson might unveil this device at CES 2012.