I had heard a lot about the sales and speedy performance of the Samsung Galaxy S 2 from various reviews and friends who had already bought the device and I was very excited when it finally came to me for review, and I was certainly not disappointed, the device was extremely lightweight and blazing fast. Now I have used the SGS2 for about a month and I would like to say that this is one of the best devices out there, powered by  a 1.2 GHz dual core processor and a quadcore GPU. This review will mainly concentrate upon performance of the device and benchmarks. 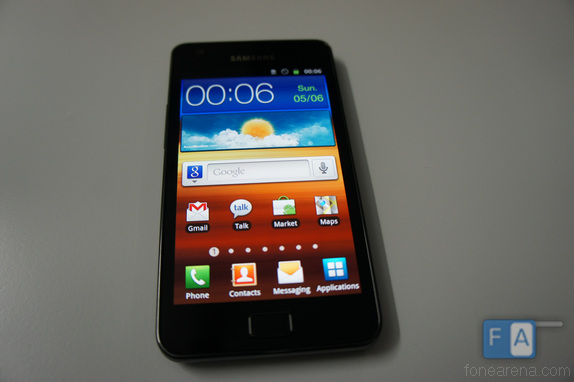 At first it took me some time getting used to the super responsive touchscreen and the really fast device coming from a Nexus One which was one of the fastest devices some time back. The opening of the application drawer, animation effects, slide effects, etc are really fast without any lags, though I found the Home screen lagging sometimes after closing an application and returning home.

The device comes with Android 2.3 (Gingerbread) pre-installed. The speed at which the 3D gallery opens is really amazing and I have never experienced the gallery open up so quickly with all the images/videos in any devices, including the Tegra 2 powered devices and the Sensation.  I watched a movie called “Sucker Punch” in Full HD and the video playback was really very smooth and did not encounter any lags or blank screens when fast forwarding in stock video player. The pinch to zoom of images in the gallery is normal, though it takes some time to render.

The Samsung Galaxy S 2 gets a score of 3149 on the Quadrant benchmark which is really good compared to the 1999 scored by the Sensation. 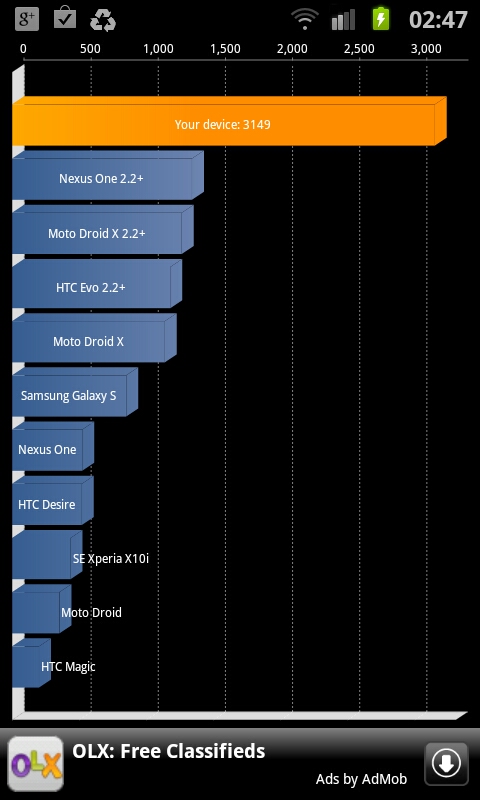 Another benchmark we performed was Antutu benchmark where it got the total score of 5805. 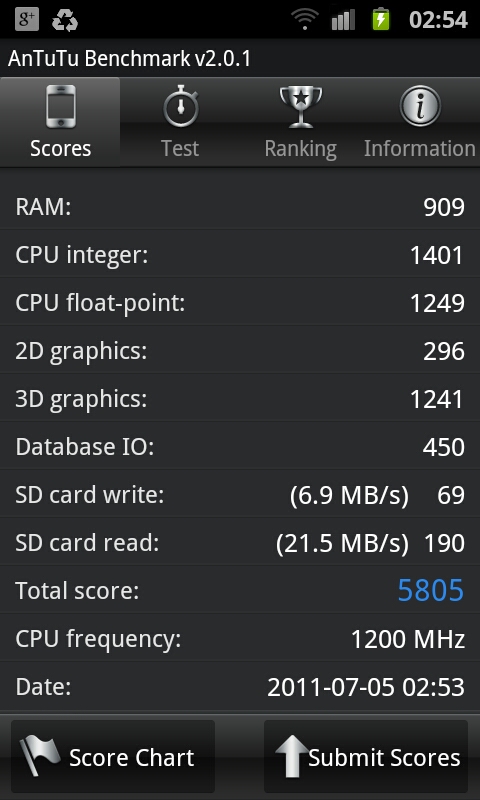 Linpack was also performed on the device, which is mainly used to determine the floating point computing power. It returned 80.625 MFlops in 2.09 seconds. 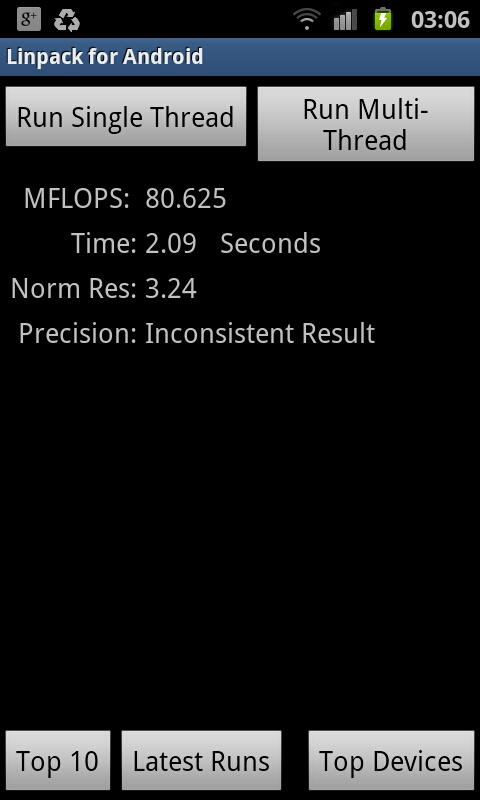 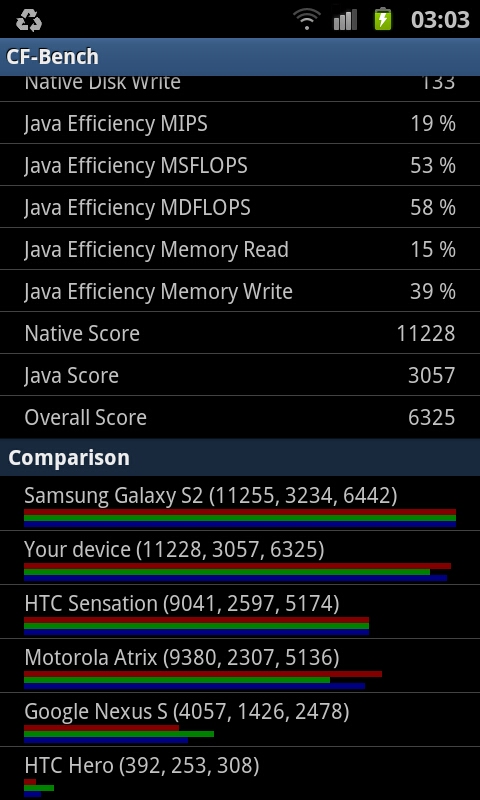 I was actually a bit disappointed by the speakers on the SGS 2, the volume is really low with less clarity, but audio is quite average when listening through the headphones.  Other than the speaker quality I also experienced a drain in battery, which gave me only about 10 hours of battery backup with the usual browsing, youtube videos, about 3-4 calls and some games, which is quite low when compared to the battery backup of my Nexus One with the same usage running up to 21 hours straight. I have heard from my friends that the new update to the SGS 2 solves this issue and the battery drain has stopped, taking the device to more than 16 hours in heavy usage.

The performance of the browser was also not quite bad compared to the stock Android browser, the browser does not come under any pressure when too many tabs are open at one time. What I loved about this device is that I had two HD games running, the browser open with 3 tabs, and I was easily talking to my friend without any issues and returning back to my games after the call, well I must say I had great experience multi-tasking with the SGS2.

Samsung Galaxy S 2 does not have the stock android browser, instead it has the custom one which comes with Touchwiz.We performed 2 main browser test one is the Sunspider Javascript Benchmark test where it got a score 3348 ms which is lower than my the score of the Android stock browser on my N1 and iPhone 4 running iOS 4.3. 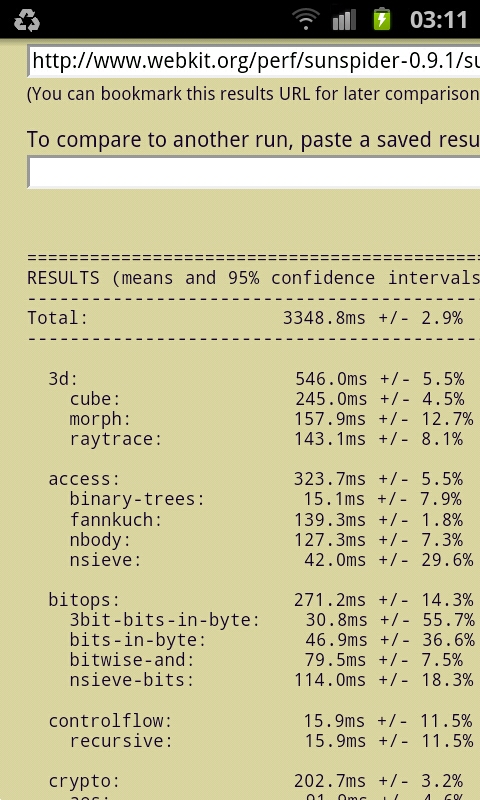 The second test we performed was the HTML5 browser test where the browser scored 189 which is lower than the stock Android browser’s score of 211 and way behind the safari browser found in iOS 4.3 which has a score of 217. 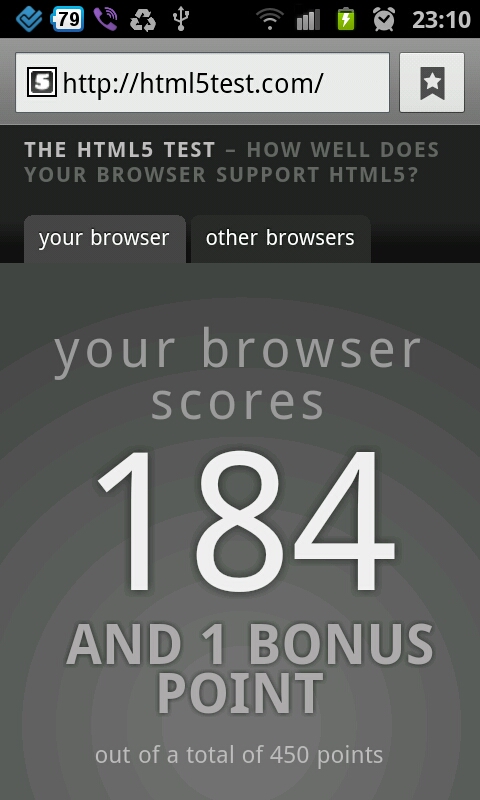 The SGS 2 does have a very powerful quadcore GPU, and most of the people love playing HD games but I was not able to install HD games like NFS this is mainly because the GPU is not compatible with the texture compression formats of most of the games by EA, Gameloft, etc. If you want to play these games then these developers who create these games should recompile the games in a texture compression format which will be supported by the Mali-400 GPU. There is also a work around which will let you play all the tegra optimized and other games, but for that you require root, and I have not tried it yet. But when it comes to multimedia, it is the best device to view full HD videos.

The GL Benchmark Egypt gives  38 FPS, Pro gives out 59 FPS  and  Nenamark gives 59 FPS. One thing I noticed over here is that though Mali-400 is the best GPU out there and being quadcore it should perform better but the benchmark results are similar to those by the GPU of the HTC Sensation. What I think is that maybe Samsung has disabled some cores, it’s just a thought, maybe a software update will solve the issue.

Overall this is a great device, I was really sad to return the device after the review, and now trying to get used the small screen of my Nexus, also I miss the speed! If you don’t care about gaming very much then this is your device, there is none better, also the Touchwiz 4.0 UI is far more better than the earlier Touchwiz versions, which will provide you a great Android experience. Also the experience of watching a full HD movie on a 4.3″ Super AMOLED plus display is out of this world. You should give this device a shot if you are looking for a powerful device and if you are a power user and love to multi-task.