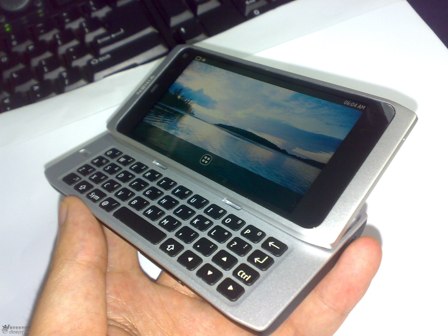 Looks like its going to take a long time for all the Nokia fans around the world, to come out of the excitement, especially after the announcement of the stunning Nokia N9 MeeGo device. But I am sure you must be wondering about the device which we were all expecting to be the N9, with the full-QWERTY keyboard, though it turned out to be a pure touch screen phone.

Well the device is the Nokia N950, which will be available exclusively for the developers, to help Nokia develop more number of applications for the N9 MeeGo smartphone.

The Nokia N950 will be given away in limited numbers for the developers and will not be available for purchase.

Here are the release notes of the N950

While every effort has been made to ensure the accuracy and completeness
of the notes, we cannot guarantee that we have succeeded in our task and
thus, these release notes are provided “as is” and without any warranty
of any kind.

Further, as N950, including its device software, is not a commercial
device, the quality and/feature set of N950 is of beta quality and comes
without any warranty or support whatsoever.

Finally, when we in these release notes make statements as to the features
of N9 (e.g. describing differences between N950 and N9), it is not a
representation that the commercial version of N9 will actually include
such features.

* N950 is physically larger and is made out of aluminum, whereas N9 has
a polycarbonate unibody.
* N950 has a physical slide-out QWERTY keyboard. The N9 is a touchscreen
-only device.
* N950 has a 4” TFT LCD display whereas N9 has 3.9” AMOLED display.
Display resolution is same on both devices (854×480). Due to the use
of different display technologies, developers should avoid one pixel
with fonts and graphical objects with lines one pixel wide. Also avoid
the extensive use of bright colors, especially white, when developing
for OLED displays as this increases the power consumption (typical
for OLED displays).
* N950 has a different physical camera module than N9. Both camera
modules have very similar image quality (Carl Zeiss branding in N9)
and both modules support 8Mpix image mode.
* In the N950 the front facing camera is in top right corner and on N9
it is in the bottom right corner. The actual camera module is same.
* N950 supports Bluetooth version 2.1+EDR, whereas N9 supports
version 4.0
* N950 does not have support for NFC
* N9 has slightly more sensitive magnetometer and ALS
* N950 has 1320mAh battery, the N9 has 1450mAh battery

General:
* The Nokia N950 phone software is in beta stage and does not represent
the final quality or feature set which will be available when Nokia N9
is commercially available.
* If the device becomes unresponsive you can to perform a hardware reset.
Press the power key on top of the device and keep it pressed down for
8 or more seconds
* Certain types of use may drain the battery faster than normal.
* Across the UI there are still logical ID’s shown in some languages,
icons may not be finalized and animations with opening windows are
missing.
* Over-the-Air updates may not be available for the next software version.
* Gallery application may sometimes display ‘no items’
* Help (Info buttons) is disabled from this release
* There are many applications and services which are not available in
this beta release.
* Performance of all use cases has not been optimized yet
* Echo may be heard during some voice calls. This can be eliminated
by turning speakerphone on and off during the call.
* Chinese input method is not supported in this Beta release

Connectivity:
* The device may not always see all available WLAN’s (refresh)
* WLAN data transfer may stall off and on with WPA2/AES encryption.
* Bluetooth may not work when Device is connected to WAPI AP.
* The browser is unstable, has known rendering issues with sites.
The look and feel of the browser is not finalized yet.
* Using SB and transferring large amounts of data slows down device
and may long before content shows up in e.g. music player or video
player.

Development:
* USB needs to be in SDK (from Settings->Accessories->USB) before
connecting to SDK via USB (or use Always ask mode and then selecting
SDK mode when connecting with USB)