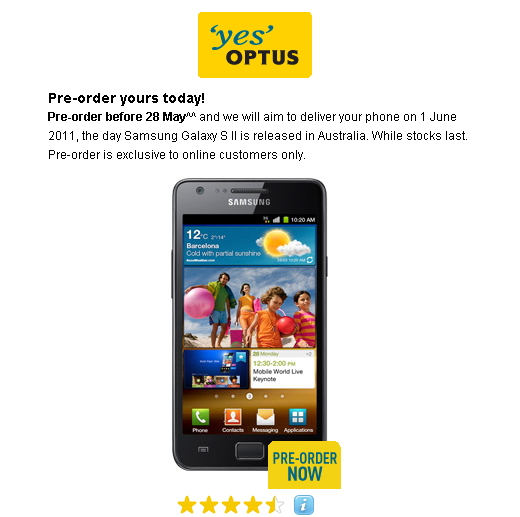 Samsung Galaxy S II was announced by Samsung at MWC and it’s already available in UK and other countries. Samsung want to launch it in more than 110 countries, and they are also gearing up to launch it in USA, but how can they forget Australia? Australian carrier Optus has officially announced that they will be launching the Samsung Galaxy S II earlier next month. If you pre-order the device right now, then you will get it on 1st June hopefully. It’s already available in Australia via retailers but they are offering it for 899 AUD, which is very expensive. But from Optus, you can get the SGS2 for free on contract with selected plans starting from 79 AUD per month. As you may know that Galaxy S II is an amazing device and our Australian readers, you can get your favorite device next week if you pre-order it right now.

So who’s getting a SGS2 from Optus, anyone?