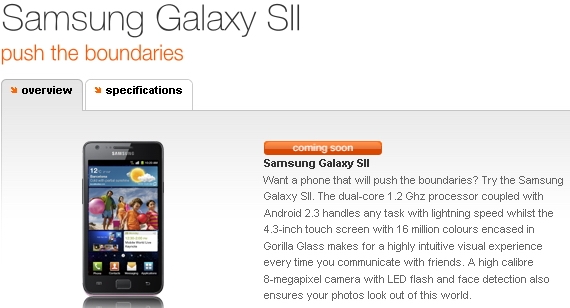 Samsung Galaxy S II is an amazing and great looking device and it was announced by Samsung at MWC. It’s currently available for purchase in South Korea and in UK via online retailers. Most of you may know that Galaxy S II will hit Vodafone UK as well as T-Mobile UK. Competition between UK mobile carriers is very tough, and they all want to be the first one to offer a new device people are looking forward to. Now it looks like Orange UK is also gearing up to announce Samsung Galaxy S II as they added the device in their coming soon section. As it’s already available in UK via retailers, I think that Orange UK and other mobile phone carriers will announce it later this month, but you should wait for some official words from the carriers.

Galaxy S II is for sure a good and demanding device, and as we told you that more than 3 million Galaxy S II units are pre-ordered by international carriers. So UK residents, are you getting your Galaxy S II from your favorite carrier?