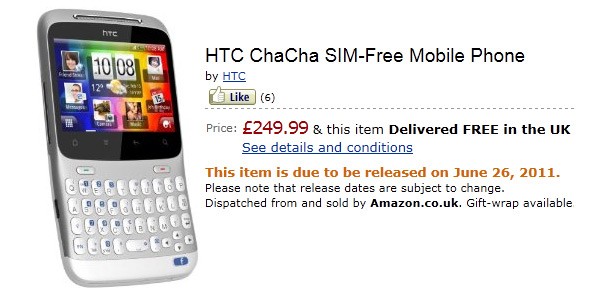 HTC officially announced HTC ChaCha and HTC Salsa at MWC, which are their first ever devices to feature a dedicated Facebook button. If you are dying to get your hands on HTC Facebook phones, then you should head-over to Amazon and pre-order one because it’s now available there. Amazon will start shipping both devices on June 26th and both are available in SIM-free version. HTC ChaCha is available for £249 and HTC Salsa is available for £320 ($524) SIM-free. Hopefully, these both devices will hit UK carriers and I am sure that they will go for free on contract. But if you are looking for a SIM-free version then pre-order one from Amazon now. As Amazon is launching these phones on June 26th, it looks like it will also hit UK carriers in June.

So HTC and Facebook phones, are these two new phones a good composition of Facebook and Android for you?