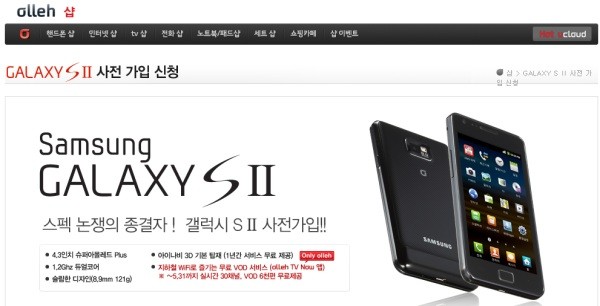 Samsung Galaxy S is still one of the best Android devices available in the market, and they officially announced the successor to it back at MWC, which is known as the Samsung Galaxy S II. Samsung Galaxy S II is an amazing looking device and pretty fast, and it will hit UK on May 1st and some retailers are launching it tomorrow. Now Samsung has finally launched the device in their home town and it’s up for pre-order via S.Korean mobile network KT. We heard a few weeks ago that it will hit S.Korea on April 25th and the prediction was 100% right.

KT Version of Samsung Galaxy S II comes with NFC capability along with compatible apps like the Olleh Touch, which is actually a payment system being implemented at the local S.Korean grocery shop known as Lotte Mart . Well, that’s the feature which is missing on other Galaxy S II models. You may have seen Samsung Galaxy S II ads in which Samsung is showing off the voice talk feature twice, amazing AMOLED display and its amazingly slim design. So our S.Korean readers, are you buying the Samsung Galaxy S II?