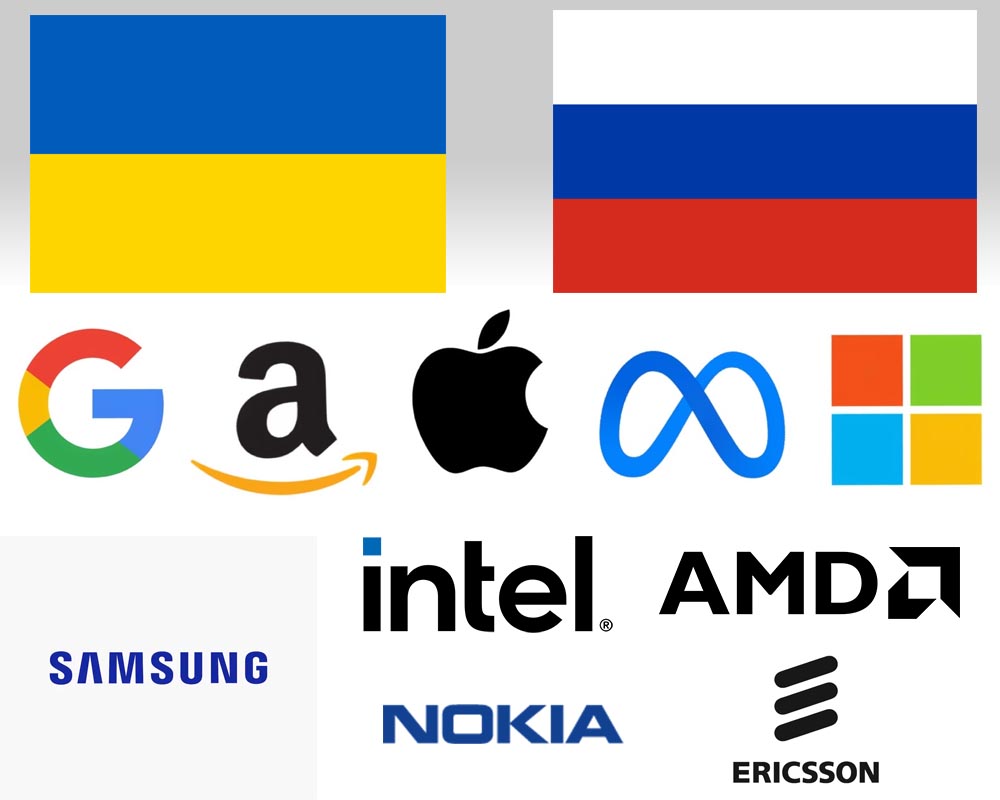 We live in a hyperconnected world where technology companies play a very important role in our lives and most of the big tech companies have global operations, including Russia, which is the largest country in the world by area and a key market for most international companies.  The world is still recovering from a pandemic and the last thing we needed was a war, unfortunately, Russia decided to go to war with Ukraine. I sincerely hope the violence stops soon and pray for those affected by the situation.

Due to the ongoing Ukraine War, Russia is facing a lot of sanctions from the US and Europe, and this has forced several companies to stop their Russian operations.

This also shows the new age we live in where battles are fought not just with weapons but by blocking access to technology and services. It is also a wake-up call for India or any country to be self-reliant and encourage domestic companies and reduce over-reliance on international companies. But then we live in an era of globalization, so it is a double-edged sword. In 2022 an App is mightier than a sword!

Apple has stopped all product sales from its online website in Russia after a plea from Ukrainian vice prime minister to Apple CEO Tim Cook. Apple has also stopped all exports into the sales channel in the country. The company has also disabled traffic and live incidents in Apple Maps in Ukraine as a safety and precautionary measure for Ukrainian citizens.

We have taken a number of actions in response to the invasion. We have paused all product sales in Russia. Last week, we stopped all exports into our sales channel in the country. Apple Pay and other services have been limited. RT News and Sputnik News are no longer available for download from the App Store outside Russia.

And we have disabled both traffic and live incidents in Apple Maps in Ukraine as a safety and precautionary measure for Ukrainian citizens. We will continue to evaluate the situation and are in communication with the relevant governments on the actions we are taking. We join all those around the world who are calling for peace.

Google has stopped selling online advertising in its Search and YouTube, as well as outside publishing partners in Russia.

In light of the extraordinary circumstances, we’re pausing Google ads in Russia. The situation is evolving quickly, and we will continue to share updates when appropriate.

Microsoft has suspended all new sales of Microsoft products and services in Russia.

We are announcing today that we will suspend all new sales of Microsoft products and services in Russia.

In addition, we are coordinating closely and working in lockstep with the governments of the United States, the European Union and the United Kingdom, and we are stopping many aspects of our business in Russia in compliance with governmental sanctions decisions.

As a company, we are committed to the safety of our employees in Ukraine and we are in constant contact with them to offer support in many forms, including those who have needed to flee for their lives or safety.

Samsung has suspended product shipments to Russia. The company is donating $6 million, including $1 million, in consumer electronics products.

Due to the current geopolitical developments, shipments to Russia have been suspended. We continue to actively monitor this complex situation to determine our next steps.

Our thoughts are with everyone who has been impacted, and our priority is to ensure the safety of all our employees and their families. We plan to actively support humanitarian efforts around the region, including aid for refugees. To this end, we are donating $6 million, including $1 million in consumer electronics products, as well as voluntary donations from our employees.

Amazon has deactivated some Ukraine-based sellers to protect them from accruing unnecessary penalty fees or unfair suspensions for certain policy violations due to delayed shipments. This is a part of standard precautionary measure the company takes in times of unforeseen events, such as a natural disaster.

Meta has paused ads targeting people in Russia, and said that advertisers within Russia will no longer be able to create or run ads anywhere in the world, including within Russia. This comes after the Russian government’s announcement that they will be blocking Facebook. Meta said that it is working to keep its services available to the greatest extent possible.

Intel has suspended all shipments to customers in both Russia and Belarus. The company has launched an employee donation and matching campaign through the Intel Foundation.

Intel condemns the invasion of Ukraine by Russia, and we have suspended all shipments to customers in both Russia and Belarus. Our thoughts are with everyone who has been impacted by this war, including the people of Ukraine and the surrounding countries and all those around the world with family, friends and loved ones in the region.

We are working to support all of our employees through this difficult situation, especially those with close ties to this region. We have launched an employee donation and matching campaign through the Intel Foundation that has already raised over $1.2 million for relief efforts, and we are proud of the work our teams in surrounding areas including Poland, Germany and Romania are doing to aid refugees. We will continue to stand with the people of Ukraine and the global community in calling for an immediate end to this war and a swift return to peace.

AMD has announced that it has suspended its sales and distribution of the company’s products into Russia and Belarus.

“Based on sanctions placed on Russia by the United States and other nations, at this time AMD is suspending its sales and distribution of our products into Russia and Belarus,” an AMD representative said.

Nokia has announced that it is stopping all the deliveries to Russian telecom operators due to the sanctions imposed on Russia over the conflict with Ukraine. Pekka Lundmark, President and CEO, Nokia, said that Nokia will donate €1 million to UNICEF to help support its humanitarian work in Ukraine. In addition, the company will work with UNICEF to provide a platform for employee fundraising.

Twitter has paused advertisements in Ukraine and Russia. The company said that this move is to ensure that critical public safety information is elevated and ads don’t detract from it. The company has also paused some Tweet recommendations from people you don’t follow on Home Timeline to reduce the spread of abusive content.

Spotify has announced that it has closed its office in Russia indefinitely, and said that it is providing individual support to its people in the region as well as our global community of Ukrainian employees.

Snap has temporarily disabled the Snapchat’s Snap Map “heatmap” of public Snaps in Ukraine as a safety precaution. The company said that it will continue to offer curated Stories comprised of Snaps submitted in Ukraine.

TikTok has announced it is suspending livestreaming and new content to its video service in Russia in response to Russia’s new “fake news” law.

“In light of Russia’s new ‘fake news’ law, we have no choice but to suspend livestreaming and new content to our video service while we review the safety implications of this law,” said the company.

PayPal also suspended its service in Russia on Saturday, according to a letter to the Ukrainian government from CEO Dan Schulman.

Visa said that it has worked with its clients and partners within Russia to cease all Visa transactions. “Once complete, all transactions initiated with Visa cards issued in Russia will no longer work outside the country and any Visa cards issued by financial institutions outside of Russia will no longer work within the Russian Federation,” said the company.

Mastercard has suspended its network services in Russia. With this action, cards issued by Russian banks will no longer be supported by the Mastercard network. And, any Mastercard issued outside of the country will not work at Russian merchants or ATMs.