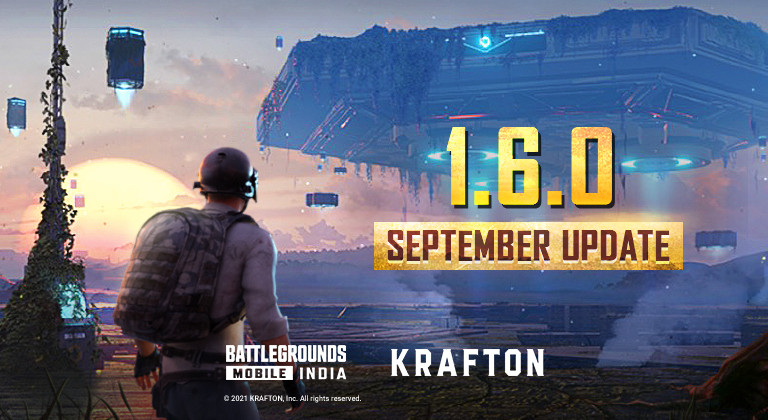 Krafton has announced has released v1.6.0 update for BATTLEGROUNDS MOBILE INDIA that brings several new features. The July update brought Mission Ignition Mode and a partnership with TESLA, MG3 weapon in classic mode and more. The v1.6.0 update brings Flora Menace Mode that is going to be all about surviving the invasion. 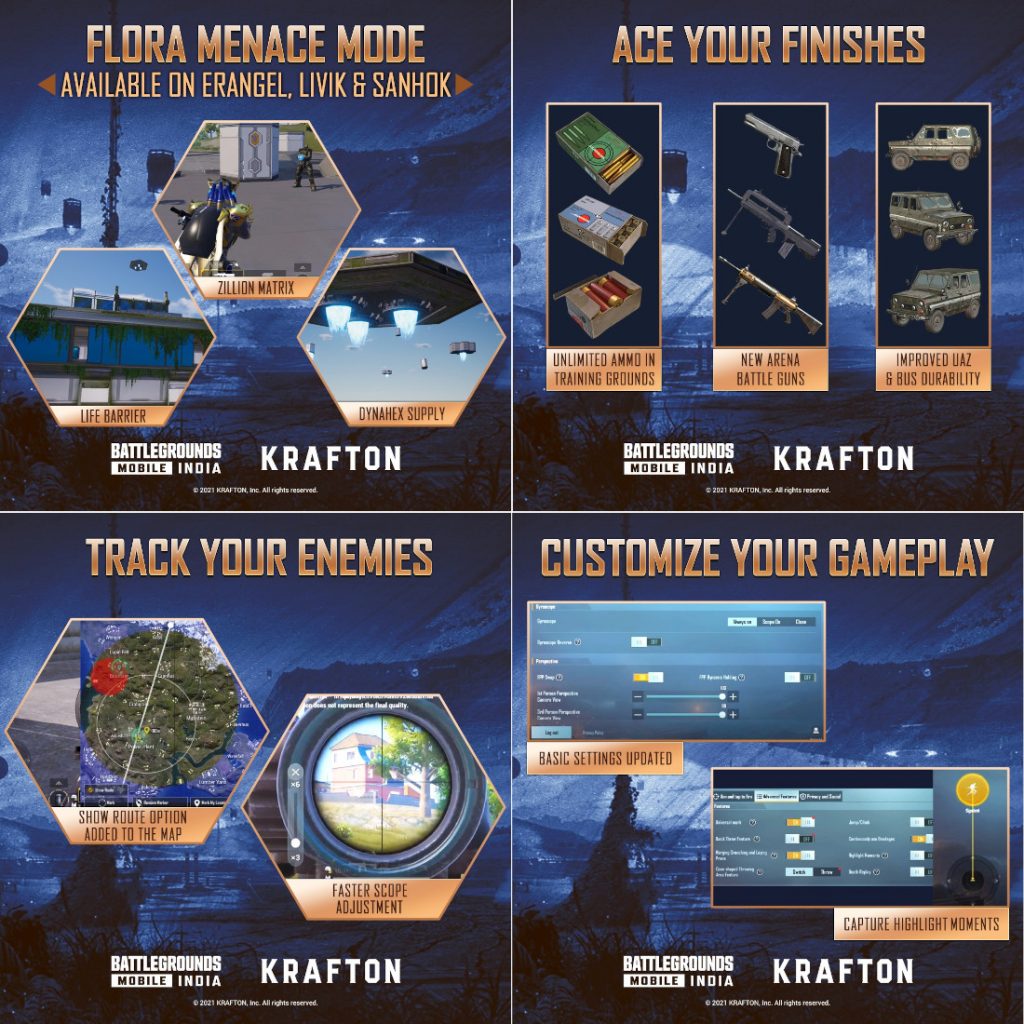 It also brings new FAMAS (assault rifle), P1911 (pistol), and MK12 (attack rifle) to the Arena Mode, faster scope adjustment and show rote option in map to track enemies easier. Basic settings have also been updated, and there is a new option in the settings that lets you capture highlight moments in a match. The update also has improved UAZ, Bus durability and improvements in graphics.

BATTLEGROUNDS MOBILE INDIA is available for Android from Google Play Store and for iPhone and iPad for Apple Store. You can check out more features in the change log below.

Classic mode under the invasion of alien plants!? Our new theme mode, Flora Menace Mode is here, but it will appear on your favourite Battlegrounds maps at different times! Coming to an Erangel lobby on September 17th, popping into Sanhok on the 18th, and finally, Livik on September 22nd. Important before you keep searching – you must check the “Mode” checkbox to get Flora Menace mode maps!

So, what’s there in Flora Menace Mode?

Alien plants called ‘Yarilo’ will occupy some cities and build a special barrier. Your health will slowly regenerate in the Rejuvenation Barrier when you are not engaging the opponents.

A special system for the fight against alien forces is coming! Gather ‘Nacores’ on the field and press the button below the mini-map on the right to enter the ‘Dynahex Supply Shop’ where you can purchase diverse items for the battle. You can order advanced items like Groza, Spetsnaz Helmet, and Backpack (Lv.3), and the ordered items will be delivered to your position via supply capsule.

There is a Cell Matrix airship in the sky of Erangel. But the Cell Matrix, which used to be the hope of escaping, is now out of control because of intruders.

If you go to the location marked as ‘Cell Matrix Robot’ on your mini-map, various robots including those with overwhelming firepower will come out from capsules to attack you. Which is not fun, but defeating them is. Defeating them will give you items, so take it as a challenge and loot items fast!

Features from previous Mission Ignition mode, including Riot Shield, Tactical Marking Device, Air Conveyor, ASM Abakan, and Automatic Drop also appears in the new Flora Menace Mode, so make good use of them in your battle!

Have you found a strange item in the Flora Menace Mode?

Keep it well! If you enter the FATAL CONTAMINATION event through the lobby banner, you can sell EpicPurple, Vine, and Yarilo Specimen, which are samples found only in the Flora Menace Mode to get Research Supply Tokens.

You can get these samples and Research Supply Tokens through daily missions. Every Wednesday and Sunday (UTC), you can also get them at Carlo’s Secret Stash. You can exchange your Tokens for permanent skins or other items, so do not miss the chance!

Livik is under the AI invasion! Team up with your friends and defeat the AIs!

You may enter Mode: VS AI at the mode selecting screen by selecting the difficulty, and you can play as a squad as well! Since everyone other than your team is AI, you can win the game by defeating them.

Before we jump into the gaming improvements, we want to thank you for all the amazing feedback you keep writing in via customer service inside the app, or on our social media. We hear you, and we work on things that you tell us about. BATTLEGROUNDS MOBILE INDIA would not be the amazing game today it is, without you, the community. So keep sending in your thoughts, and we will work together to keep taking BATTLEGROUNDS to newer heights!

With that out of the way, let us address some of the neat gameplay changes, new strategic options and all new features available to you now to help you towards that Chicken Dinner. Or Top 5, sometimes!

Flight route is an important element in predicting the opponents’ positions and establishing a tactic to get you closer to that chicken dinner, and getting to intial loot zones.

You can now check the flight route which used to be displayed only at the beginning of the game anytime on your mini-map. Check it out by tapping on the ‘Show Route’ button.

Now that Basic – Focal Length Adjustment setting is added, you can select either tapping or holding to adjust your scope distance.

Highlight works in the Classic Mode, and you can view the highlights in Match Results, Statistics, and Moments. Share your super plays with your friends!

If you activate ‘Merging Crouching and Laying Prone’ setting at the basic setting. Prone key is hidden,

Attention, all sprinters! ‘Sprint Sensitivity’ feature helps you set the level, enable this by moving the left joystick to accelerate your character from the stationary status to sprinting. You can adjust the sensitivity from 0 to 100 at the Basic – Sprint Sensitivity. The default value is 50%. The higher the value, the less you have to move your joystick to sprint.

Now you can customize the anti-aliasing settings better! Levels are added to the Anti-aliasing setting, which used to have only On and Off settings. Have you been hesitating to use the setting because of heat and battery consumption even if it improves the resolution?

Now, the setting is divided into Off/2x/4x, so you can adjust the levels to the one that fits your device!

Sometimes, when the battle gets intense, you’ll need to use the bandages you have, continuously. You can now turn it on depending on your HP or manually use them one by one.

Activate ‘Allow Toggling of Transparent UI Mode in Matches’ at the basic setting. Then, you can toggle the transparent UI by tapping and holding the game logo on the top during the match. Although you cannot see them, they are still functioning. To make them opaque again, tap and hold the logo again.

Activate Basic – Headshot Sound Effects. If hit the enemy’s head. Then, you will hear an SFX that sounds like hitting the actual helmet.

Sticky bomb, which is an essential item in Karakin, is added to the Auto Pick-up. You can set the number of the Sticky Bombs at the Pickup setting.

Durability of UAZ and Minibus is slightly increased.

P1911, FAMAS, and Mk12 are added to the Arena Mode configuration.

The camera vibration at the exploding of Frag Grenade is slightly improved. Share with your friends the enhanced battle experience.

A slight improvement is made on the health bar to indicate momentary multiple health reduction faster.

Movement and sprint, pivot turn, and swimming motions are improved.

Distance is added to the Universal Marker voice in the chatting interface. Expression effect for “Enemies ahead!” on the mini-map is improved.

while aiming is solved.

to the career data, rewards and achievements are added, and overall UI, artwork, and systems are improved.

Beginning from September 28th, many exciting modes will be available in the game for a limited period of time! The latest update will pack a lot of surprises later in the month as EvoGround will feature the popular Zombie mode “Survive Till Dawn” where the last surviving player in the zombie attack gets the final victory. Many more popular game modes will be appearing in EvoGround so players are requested to keep a close eye on our social channels for launch dates or directly dive into EvoGround in matchmaking. As many as 8 different game modes will appear over a period of time.

That brings us to the end of the patch notes! The update is staggered, so please wait patiently for the update to roll out to your device. We hope you’ll love Flora Menace and all the awesome enhancements, coming your way!