According to a new Gartner research report , Android is set to emerge as most poplar mobile OS worldwide by 2011. It is also said to grab 49% of worldwide market share by 2012. Even IDC’s recent survey reveals the same.

Sales of Open OS devices is set to reach half a billion by 2012 and to cross 1 billion mark by 2015. Price of Android phones would reduce gradually and more mid range Android phones to emerge due to the competition. Average selling price of devices to reach $300 or below that by 2015. 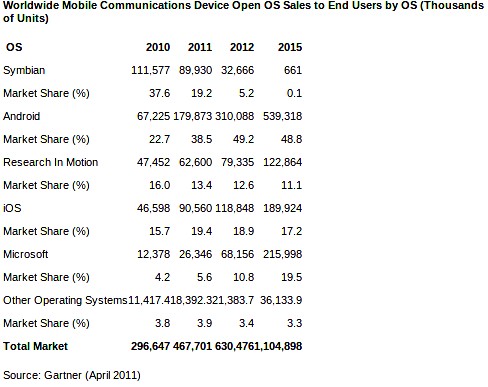 Even though there is a slight decrease in market share after 2011, iOS to stay as second biggest platform till 2014, that is already popular in the emerging markets like the U.S. and Western Europe.

Market for Symbian phones would decrease gradually, since Nokia would concentrate on Microsoft’s Windows phones. Microsoft to stay at second place with 19.5% market share, with Android in the lead with 48.8% market share by 2015.

The sales of tablets would increase after 2011 and market for tablets would see steady increase in the future. People who already own a smart phone will purchase a tablet that shares same OS with their phone, that allows them sync the content between the devices easily.