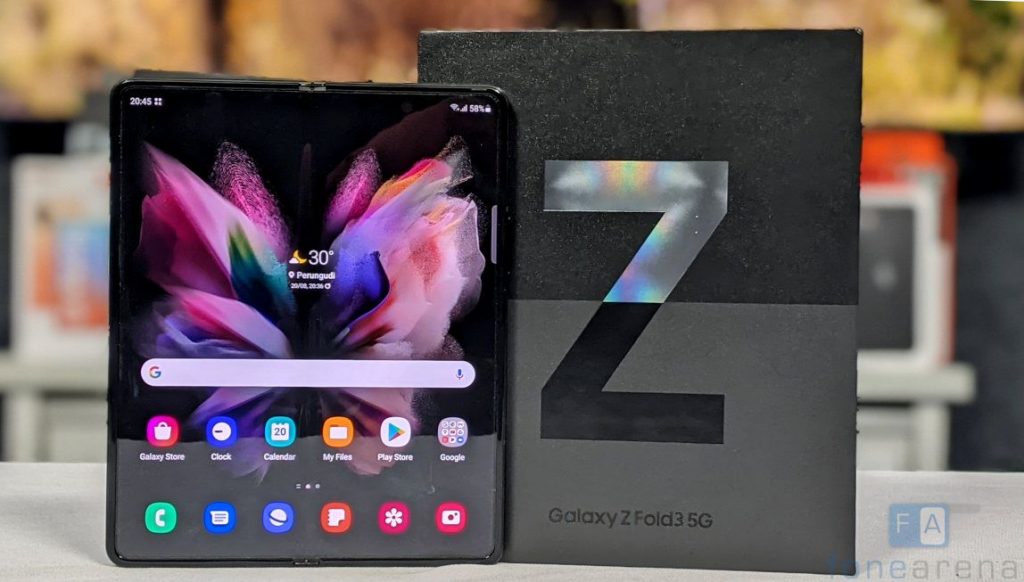 Samsung introduced the Galaxy Z Fold3 5G, the company’s latest foldable smartphone, at its Galaxy Unpacked event earlier this month. It was also launched in India earlier this week. The Z Fold3 5G is the first foldable phone to feature an under display camera, S Pen stylus support, and it also has IPX8 water resistance rating, which is a big deal for a foldable phone. We got to check out the phone, and here are the first impressions. 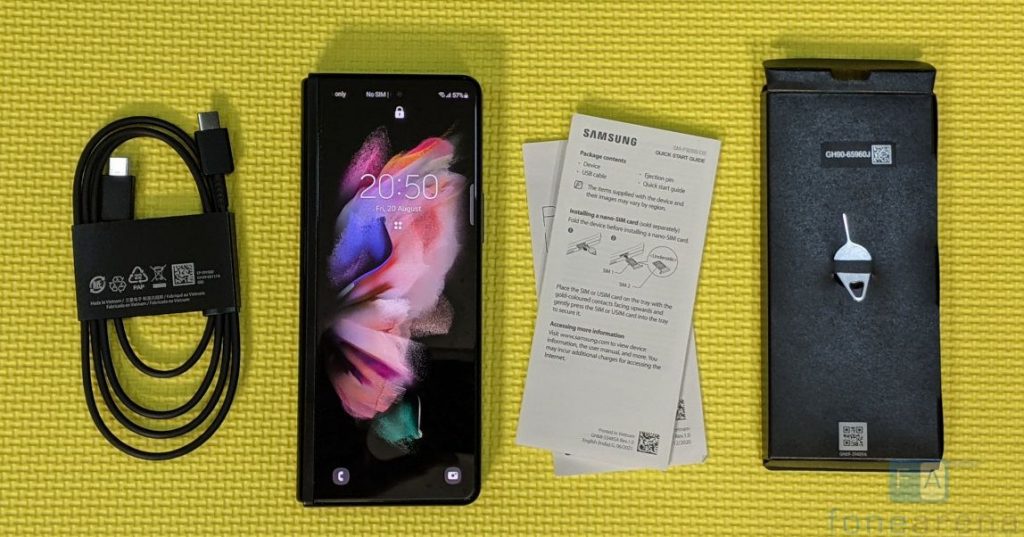 Samsung already switched to minimal packaging with S21 series by removing the charger and the headset, and this continues with the Fold. This makes the box smaller 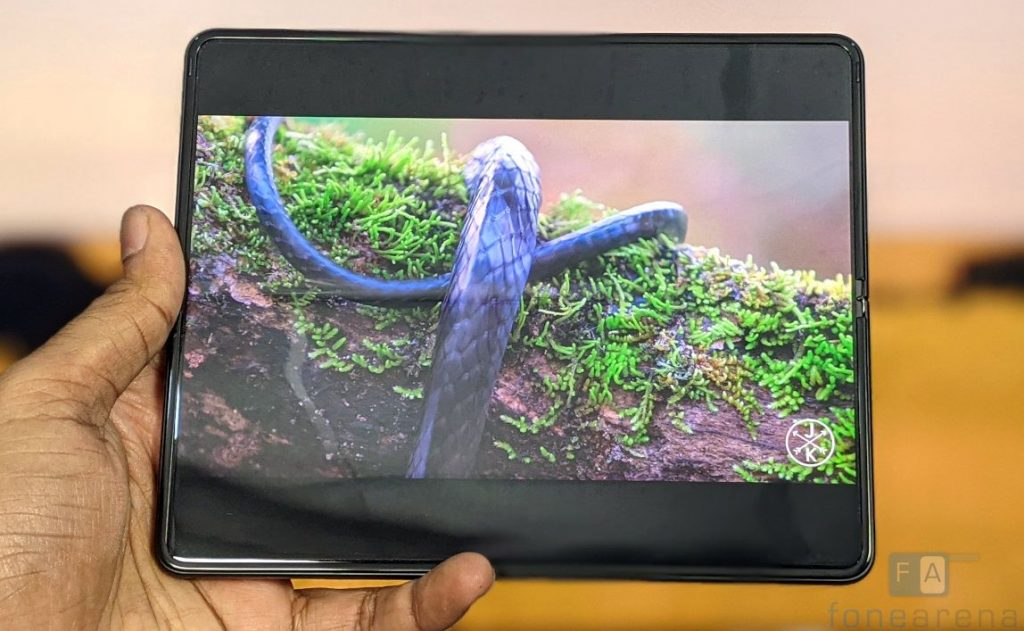 Starting with the display, the Galaxy Z Fold3 features a 7.6” (2208 x 1768 pixels) QXGA+ Dynamic AMOLED 2X Display (22.5:18) Infinity Flex Display with 120Hz adaptive refresh rate with up to 1200 nits brightness, 29% brighter than the Z Fold 2’s display. The company also says that the Samsung Ultra Thin Glass used in the Fold3 is 80% stronger than the predecessor. You hardly see the under display camera when you are watching videos. 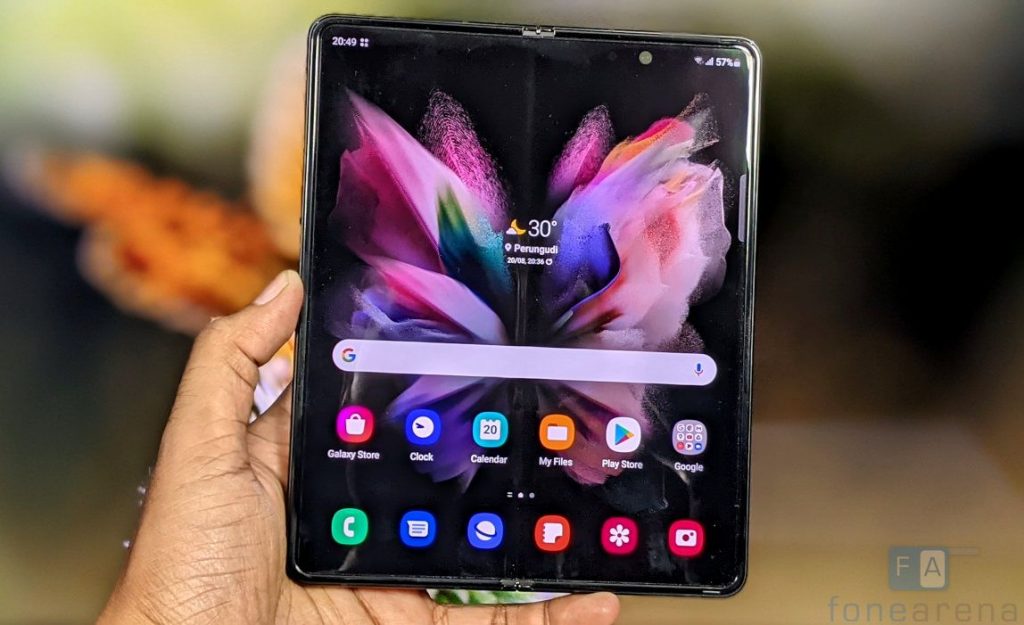 It still has that crease which is visible when you look at the screen from certain angles, and the under screen camera is also visible from this angle. 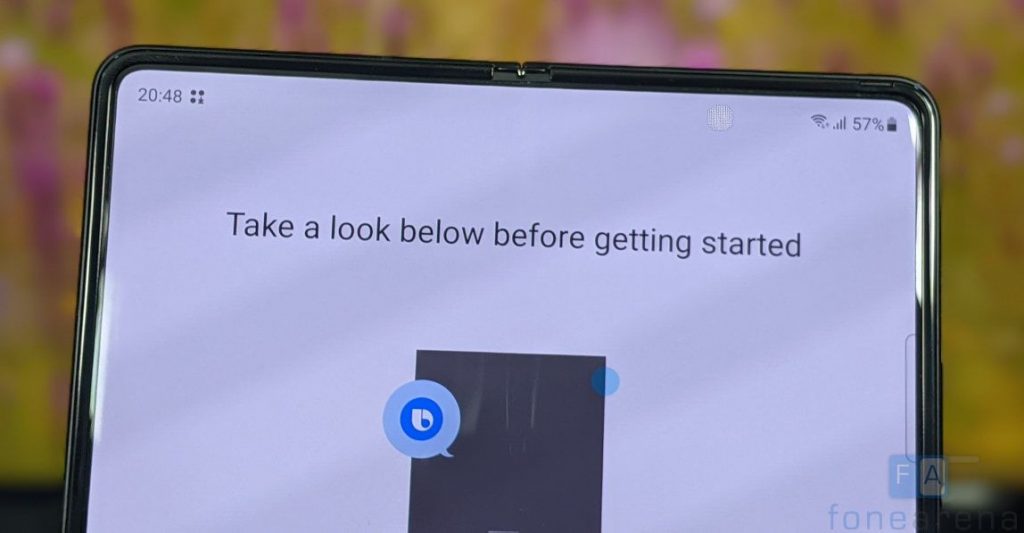 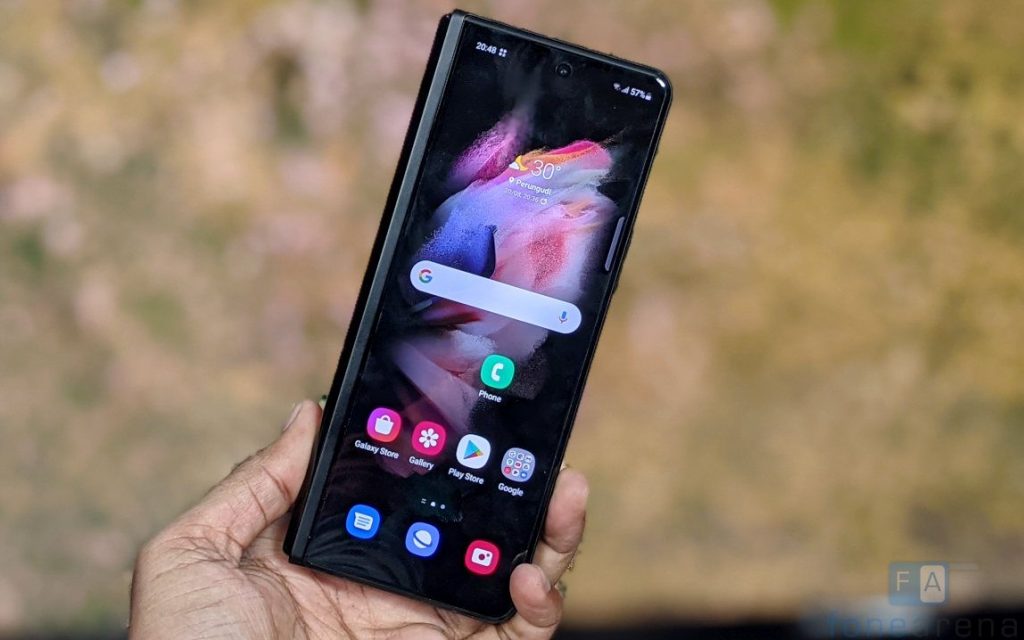 On the outside, there is a 6.2-inch (2268 x 832 pixels) 24.5:9 HD+ Dynamic AMOLED display, and this time this also has 120Hz refresh rate offering a smooth experience. The screen is protected by Corning Gorilla Glass Victus. The tall aspect ratio makes the text look small, and typing in a narrow screen might not be a good experience if you have large hands.

The phone is powered by Snapdragon 888 with 12GB of LPDDR5 RAM and 256GB or 512GB (UFS 3.1) storage options. It doesn’t have a microSD expansion slot. The phone runs Android 11 One UI 3.1 on top. This has Flex mode features, which let you do more at once, such as joining a video call on the device’s top screen while checking meeting notes on the bottom. There is updated Multi-Active Window, App Pair and new Taskbar can be used to quickly switch between apps without returning to the Home screen. 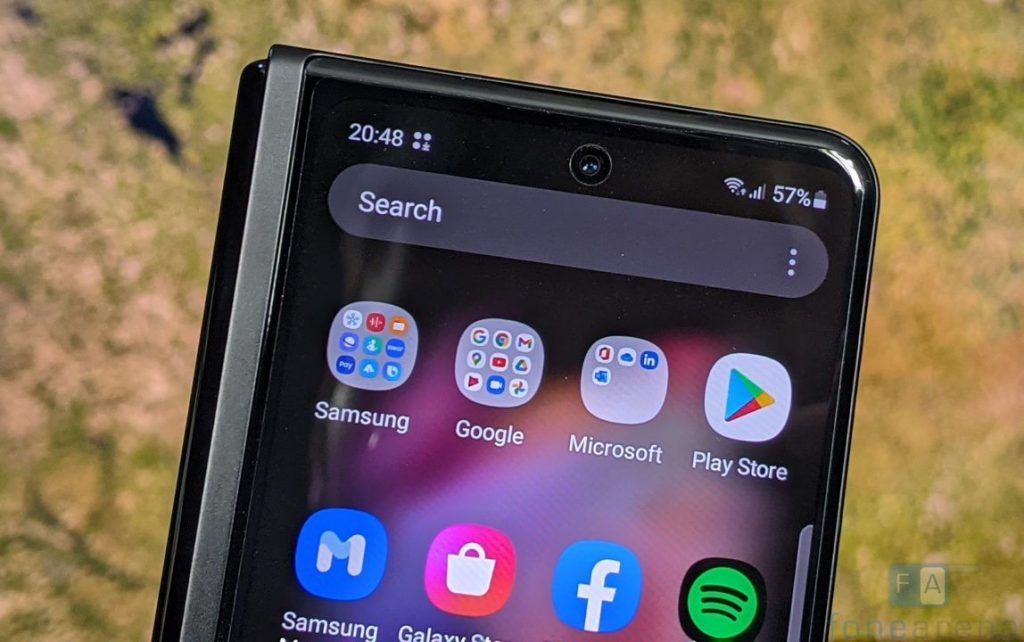 There is a 10MP camera for the outside screen, the same as the Z Fold2.

The phone has an Armour Aluminium frame, which the company says is its strongest aluminium frame yet. It is definitely better than the predecessor, and I like the matte finish, which doesn’t attract fingerprints.  The phone also has IPX8 water resistance rating, but it is not dustproof. When closed, the phone is 16mm thick, and it is 14.4mm at its thinnest point. You still see a small gap when the phone is closed.

Coming to the button placements, the power button that embeds the fingerprint scanner is present on the right side along with the volume rockers. The dual SIM slot is present on the left side. Instead of a single SIM and an eSIM option in the previous Fold, Samsung has offered two physical nano SIM slots, arranged in a single tray, which is a good thing. When unfolded, the phone is just 6.4mm thick. 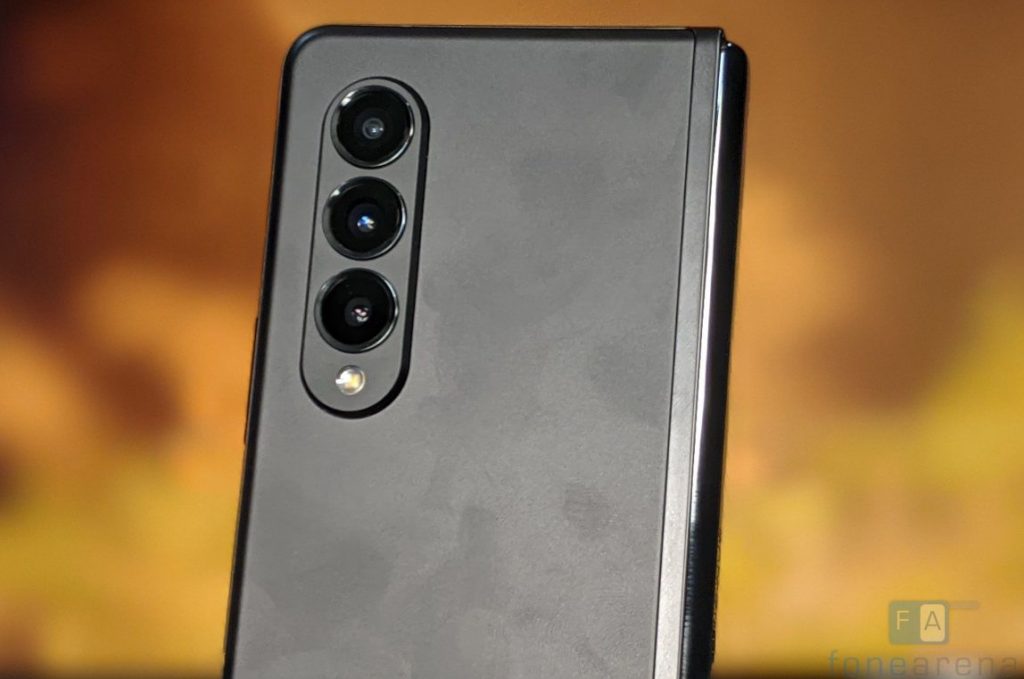 The phone has a same 12MP triple camera arrangement for the main, ultra-wide and 2x telephoto. Both the main and telephoto cameras feature OIS. This time the cameras are covered by Super clear glass with Corning Gorilla Glass with DX that offers a better scratch resistance.

Selfies from the 10MP cover camera is good, but the 4MP under display camera is just average, and looks heavily processed. Other cameras are good. The phone has up to 4K 60fps video recording both on front and rear cameras, but it doesn’t have 8K recording that is present in the S21 series. Check out some camera samples below. 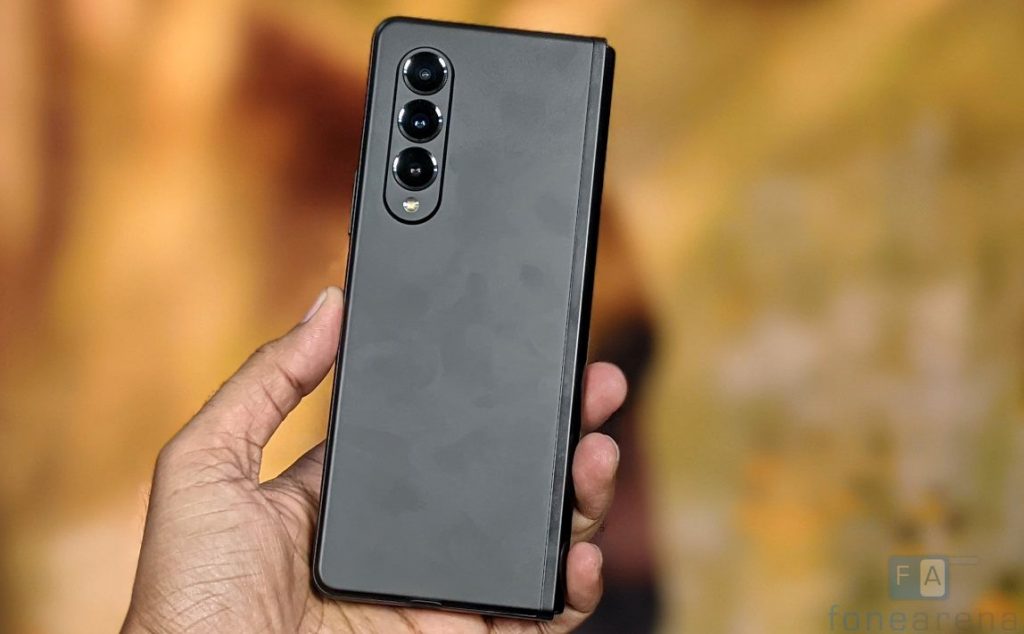 The back of the phone also has a matte finish on the back cover, which is protected by Corning Gorilla Glass Victus that offers a smooth finish and doesn’t attract fingerprints. At 271 grams, the phone is 11 grams lighter than the Z Fold2. It packs a 4400mAh battery with support for 25W wired and 10W wireless charging, and also supports 4.5W reverse wireless charging. 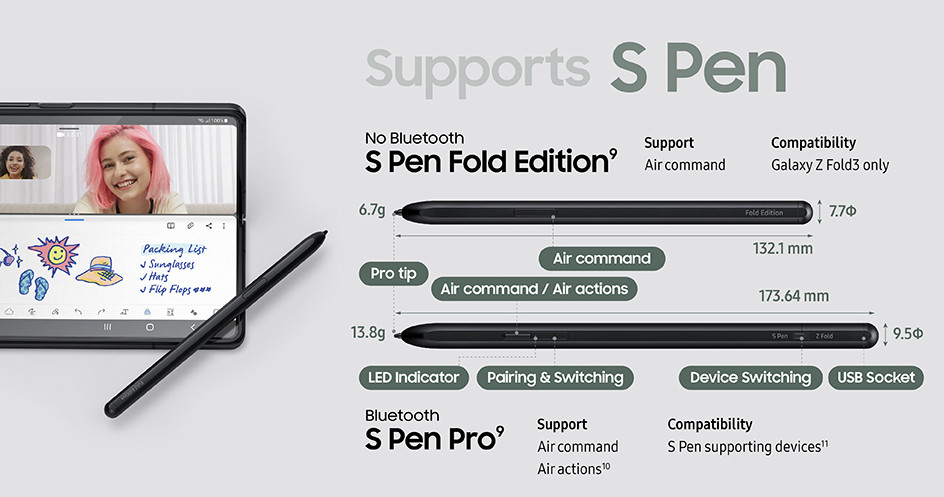 The Z Fold3 also has S Pen support, and the company sells an S Pen Fold Edition with a special tip designed for the foldable phone with force limit technology to protect the Z Fold3’s Main Screen. It also sells the S Pen Pro, which has an option to switch between the Z Fold mode and normal S Pen mode to use it for other phones like the Galaxy Note models.

Starting at price of Rs. 1,49,999 in India, the pre-bookings for the phone will start August 24 till September 09, 2021 before they go on sale from September 10. The company is also hosting India’s first live pre-book event for the phone on August 23 on Samsung.com at 6pm that will let customers avail exciting limited period offers till midnight of that day. This offers priority delivery, Galaxy Z Fold3 5G Flip Cover with S Pen and more. In addition, there are cashback offers and Samsung Care+ Accidental & Liquid Damage Protection.