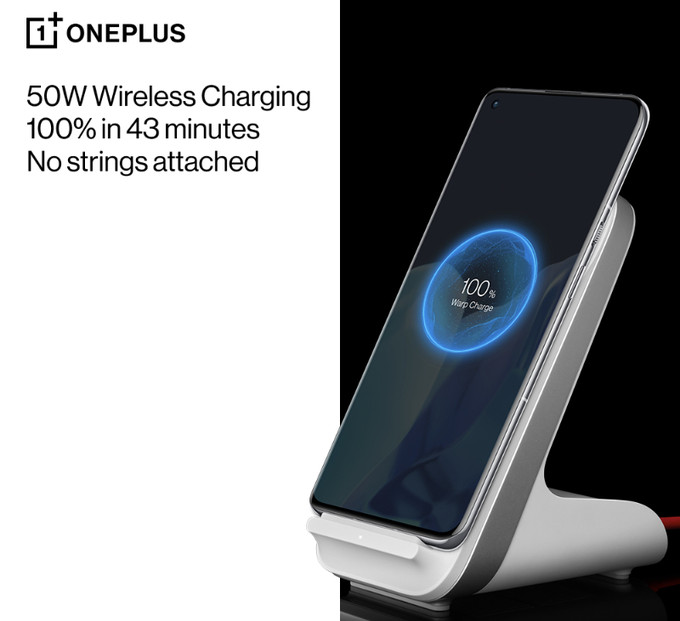 Ahead of the launch on March 23rd, OnePlus today confirmed that the OnePlus 9 Pro will support Warp Charge 50 Wireless, which is the company’s first 50W wireless charging technology. It introduced wireless charging tech in the OnePlus 8 Pro with Warp Charge 30 that took 30 minutes to charge the phone’s 4510mAh battery from 0 to 50%. The OnePlus 9 Pro’s 50W wireless charger will take 43 minutes to charge the phone from 1% to 100%. In China OnePlus has confirmed that it will come with the same 4510mAh battery as the 8 Pro.

Something new really is on the horizon. Charge your way. #OnePlus9Series

OnePlus said that it uses a dual-cell configuration that fills up both batteries at 25W each through the charging coil. It has also optimized the entire chain of components, such as coils and charging ICs, and used charging pump technology.

Warp Charge 50 Wireless increases the voltage to around 20V-2.5A. The high wattage is transferred into the OnePlus 9 Pro through the coils, after which 20V 2.5A power goes through our proprietary isolated charge pump, which turns 20V-2.5A power into 10V-5A power. This power feeds into our new twin-battery system, two battery cells in series together. Each battery gets around 5V-5A, which translates to 25W each, 50W in total.

The wireless charger is now equipped with two coils – one on the top and one on the bottom – so that you can choose between charging vertically or horizontally, allowing you to charge wirelessly while watching videos. The new charger also uses a detachable cable design, so now you can plug in the red cable of the Warp Charge 65 charger included in the box or use other USB-PD chargers.

Warp Charge 65T for both OnePlus 9 and 9 Pro

The Warp Charge 65T which was introduced with the OnePlus 8T is now present in both the OnePlus 9 and 9 Pro smartphones and these use the same dual-battery layout present on the OnePlus 8T, with the two internal batteries charging at up to 32.5W, for a combined peak charging of 65W.