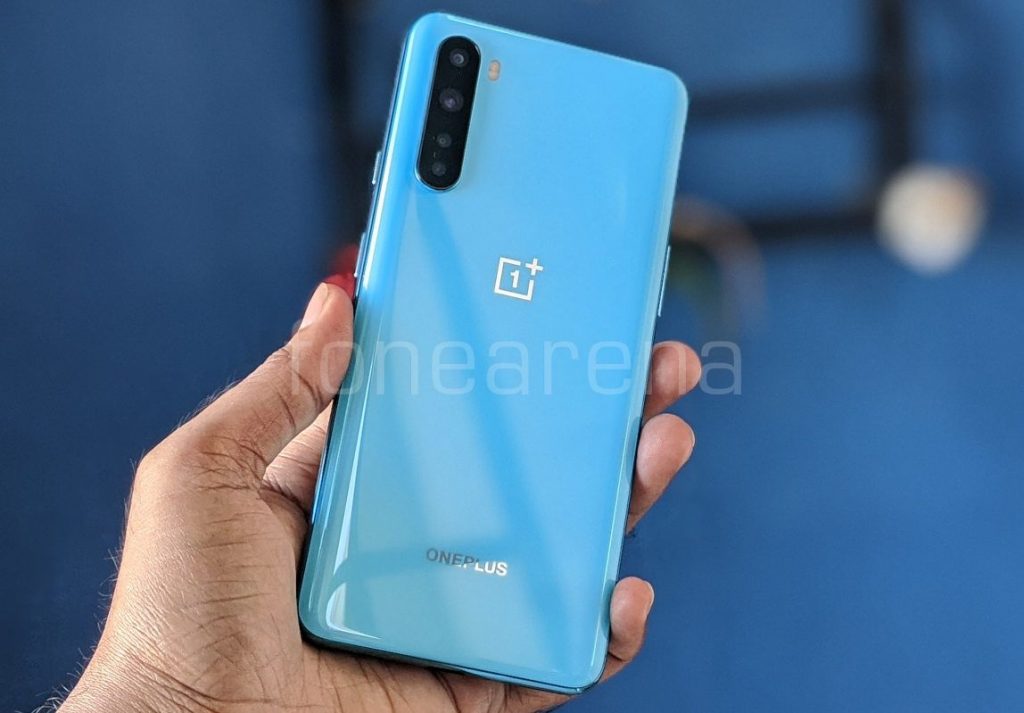 OnePlus Nord is now official! With this device, OnePlus aims to re-create the OnePlus One’s magic in the sub 30K. The company which once relied on word-of-mouth created a huge hype through various promotional events in social media and documentary for the OnePlus Nord.

OnePlus Nord is the company’s first non-flagship smartphone after the ill-fated OnePlus X, launched in 2015. Birth of the Nord is the result of the periodic price increase that annoyed OnePlus loyalists and others tech enthusiasts. With Nord, the company promises the usual OnePlus experience at a competitive price for a wider set of consumers.

Well, we’ve been using the OnePlus Nord for some time now and tested it under various conditions. To make your buying decisions easier, we have clearly differentiated, “Why should you consider” and “Why should you avoid”, buying the OnePlus Nord. We have also attached the camera samples for you to get a clear picture of Nord’s imaging capabilities. Let’s jump into it.

Why should you consider buying? 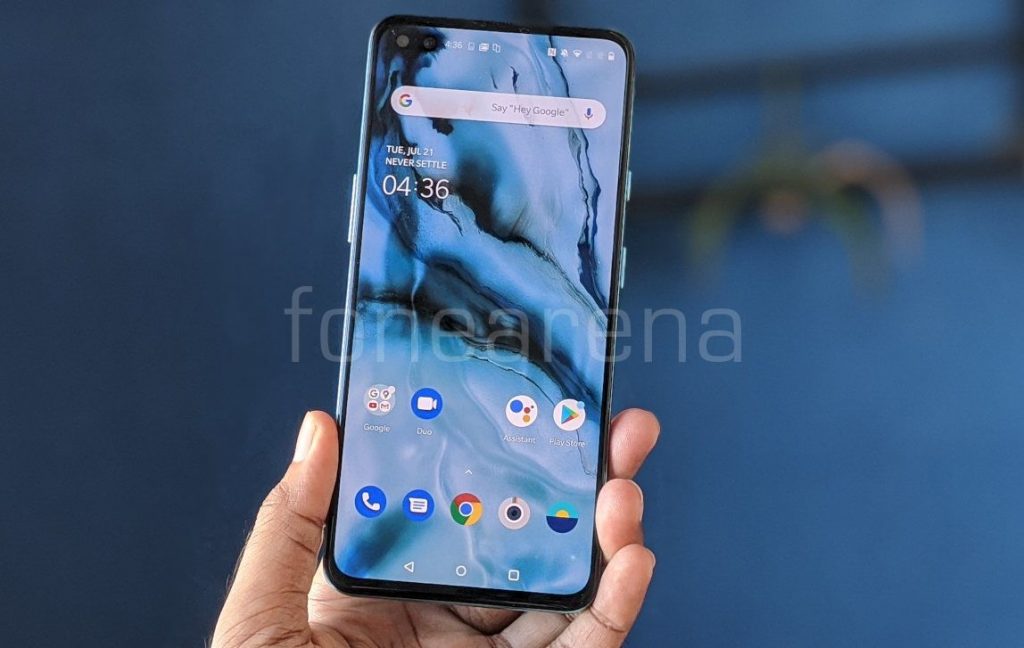 The display is protected by Corning Gorilla Glass 5 protection. The ‘Fluid AMOLED’ display, as OnePlus labels it, is purely due to the 90Hz refresh rate that it supports. It supports HDR10+ sRGB color gamut and DCI-P3 color gamut.

Like any other OnePlus device, the Oneplus Nord is no slouch when it comes to display. The colors are vibrant, blacks are deep, have a very good peak brightness, meaning you will be fine under direct sunlight. Also, it doesn’t have curved edges, which means lesser accidental touch problems.

At 90Hz, the OnePlus Nord feels smoother and faster while scrolling through my social media feeds and paging through home screen felts snappier. However, the battery drains a bit faster if you use it on 90Hz all the time.

There option either to choose 60Hz or 90Hz. With this device, you also get options to calibrate the screen with three options — Vivid, Natural, and Advanced. In case, if you read a lot on-the-go, Reading Mode — Chromatic effect and Mono effect, serve you the best. We also have a ‘punch-hole’ hiding option. Just like the OnePlus flagship series, the Nord also has “Vibrant Color Effect”, which punches up the colors upon enabling.

Build quality — Made to last 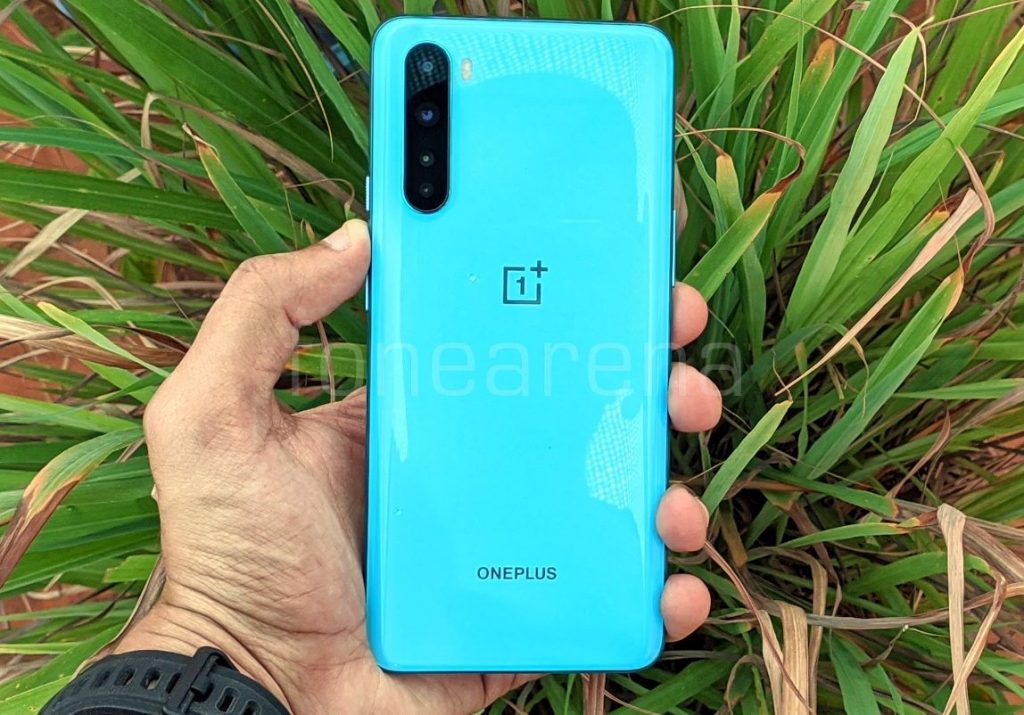 At 184 grams, the Nord feels light in hand and solidly made for sure. The device doesn’t feel cheap. Both the front and back are protected by Corning Gorilla Glass 5 with plastic frames on the side. We got the Blue Marble variant with a glossy back. We absolutely loved the paint job, fit, and finish. There’s no official IP rating, so don’t dunk in water.

There’s a volume rocker on the left, and a power button and alert slider on the right. Microphones are on the top and bottom of the chassis, and the bottom is where you’ll find the SIM slot, USB Type-C port, and the speaker grill. All the buttons are tactile and tight, and offer excellent feedback.

The OnePlus Nord is powered by the latest Octa-Core Qualcomm Snapdragon 765G 7nm EUV Mobile Platform with Adreno 620 GPU under the hood. This chipset supports 5G as well.  Unsurprisingly, Nord is incredibly fast and continues to do what it is best at. In our experience, we experienced zero lag, zero hitches, and it’s just pure speed and raw power. We tried Asphalt 9, Shadow fight 3, PUBG, and other small games. The gameplay was smooth without any unusual heating.

On the multimedia front, the OnePlus Nord comes with the bottom-firing speakers. It supports Dirac certification as well The audio output across all the levels are enjoyable without much distortion at the higher volumes. The sound quality through headphones comes out neat without any complaints. Check out the synthetic benchmark scores below. 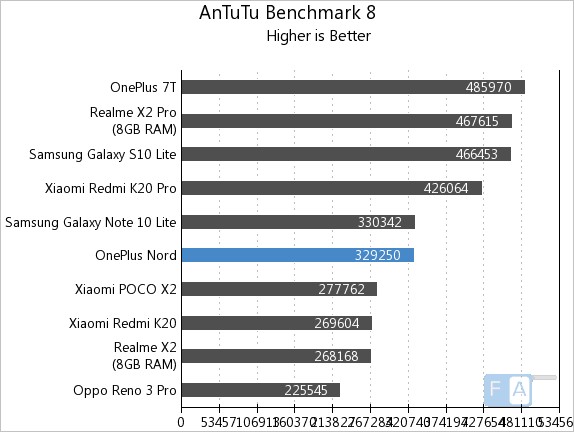 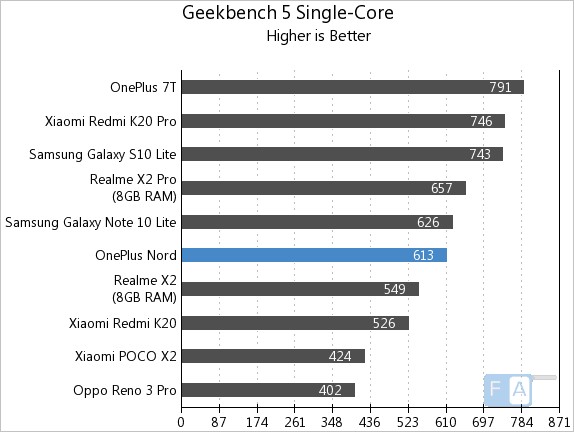 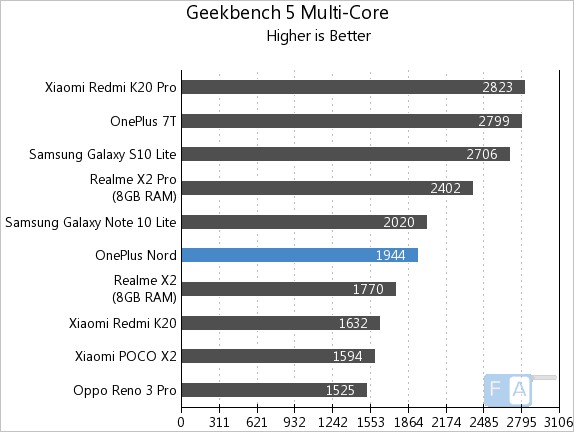 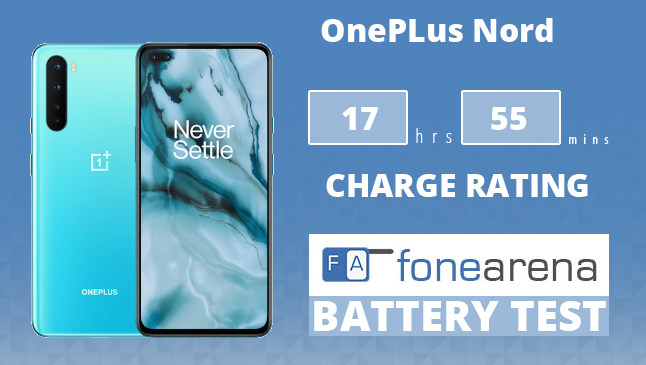 The entire OnePlus Nord hardware is powered by a 4115mAh battery with Warp Charge 30T Fast Charging (5V/6A). On my usage (casual) which involves a lot of YouTube streaming, Quora, Amazon Music, and Skyview, the Nord offered comfortably around 6 hours SOT on 90Hz and more than 6 hours SOT on 60Hz. Overall, the battery life in OnePlus Nord is amazing and lasts longer on a single charge (depends on usage though). 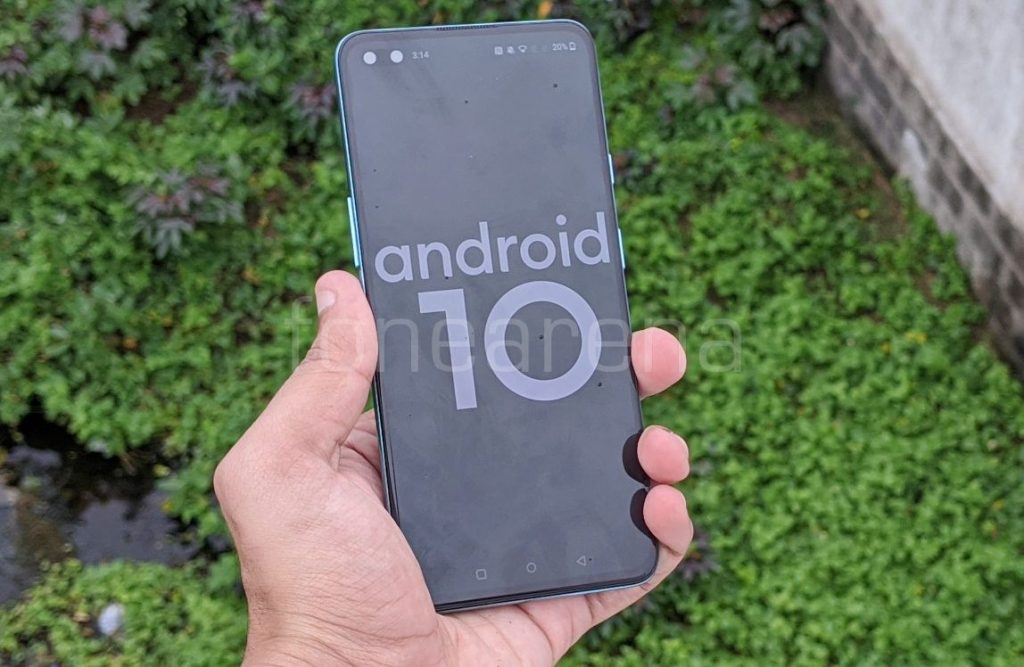 The OnePlus Nord is shipped with Android 10 with OxygenOS 10.5 out of the box. Soon after the unboxing, we received a couple of updates that are supposed to fix the camera and other bugs. The update was around 150MB both the time. OxygenOS is one of my all-time favorite UI among others. Except for a few, there aren’t any major changes in the new iteration of OxygenOS. Moreover, the company has confirmed the implementation of the Always-On display feature in Oxygen 11. The Ambient display option serves as the replacement till then.

Coming to the customisation options, there are options to change accent colors, shapes of quick toggles, font styles, and icon packs. Other useful features include double tap to lock, and Launcher layout (where you can select Home Screen with App drawer or just the home screen that accommodates all apps). And there is a ‘Left most screen’ option, where you can choose to have Google news feed or OnePlus Shelf.

The Live Caption feature detects speech in the media and automatically generates captions. Right now it works well with English content, and we can expect it in other languages soon. As per the company claims, this feature uses additional battery. Also, there are ways to move around and expand the caption. The Live Caption can be turned on and off through volume rockers as well. Instead of Dolby Atmos, the Nord has a Dirac Audio Tuner, which also offers the same option as the Dolby Atmos in OnePlus 8 and 8 Pro — Dynamic, Movie, Music. It also has separate “Earphone Adjustment”, where you can play with equaliser and audio styles.

Yet another new feature here is “Optimized charging” where it optimises charging patterns according to your usage habits to reduce battery load and extend battery life. There is an “Enable dark tone in more apps” in the OnePlus Laboratory. It enforces the dark mode in third-party apps that don’t support it. However, the feature is still experimental so some apps may not work properly.

Like other OnePlus devices, there is an option to select the function of power keys — Power menu or Voice Assistant. There is a “Work-Life Balance” feature that categorises the notification you’d want to be notified by. This feature can be enabled with apps, Wi-Fi networks, location, and timings too.

The OnePlus Nord comes with “Dual-channel network acceleration”, which upon enabling use both Wi-Fi and mobile data to provide a faster Internet connection with improved stability. Not sure about the reason, but the OnePlus Nord uses Google’s phone and Message apps rather than the company’s own.

Why should you avoid buying? 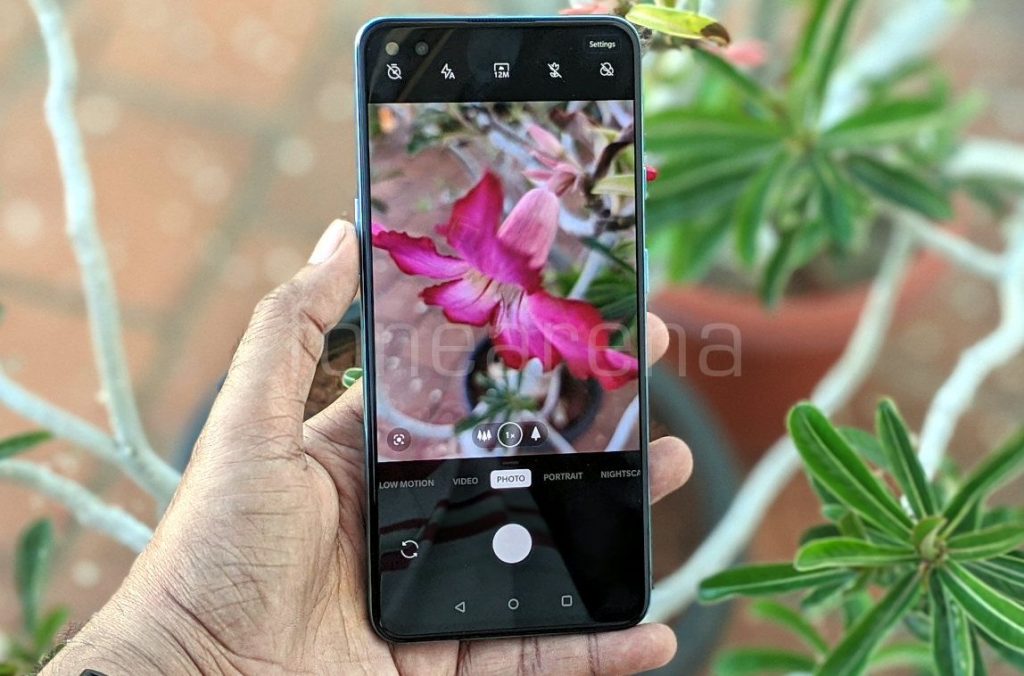 This is the department where OnePlus needs to concentrate more on. Right from the start, the camera has been the weak link for OnePlus, but it changed in the OnePlus 8 Pro. However, in this case, the company is back to square one. Before discussing the camera, here’re the specifications you need to know: 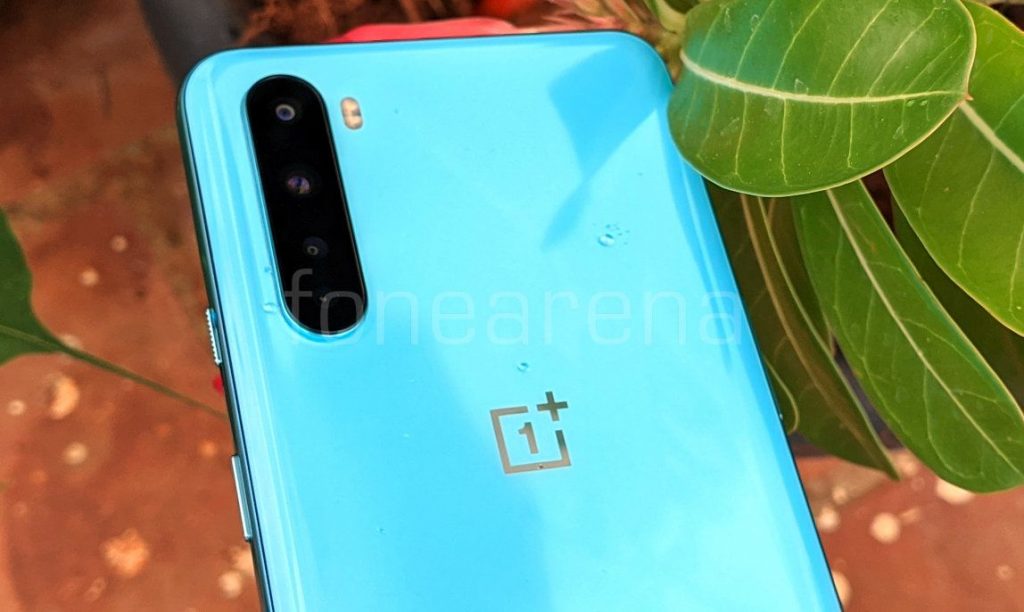 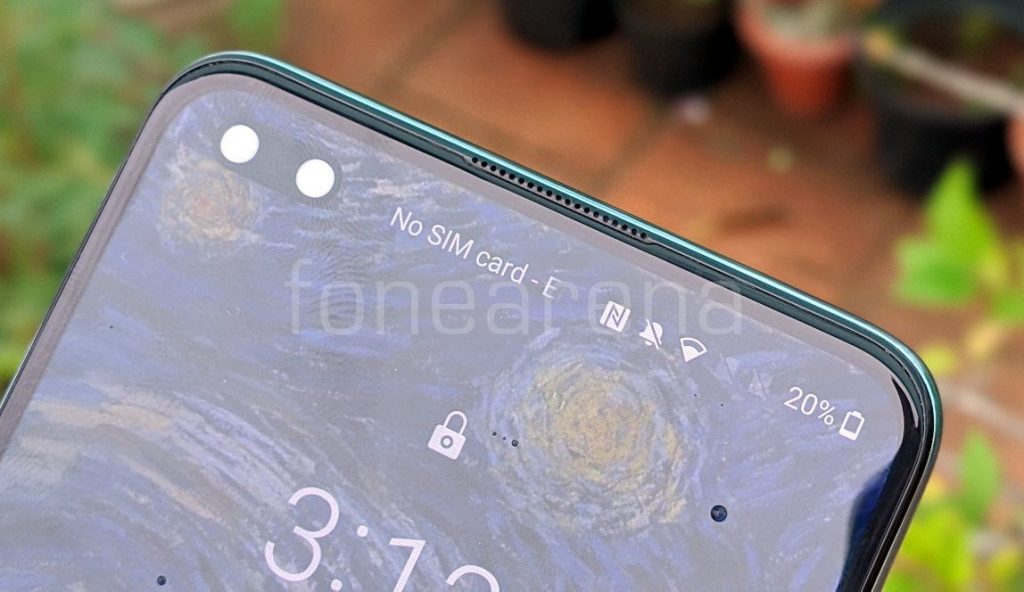 The ‘Settings’ option is now at the right top, whereas previously you have to swipe up. Right now, you also have the option to change to choose to shoot in 12MP, 48MP on the top middle. The camera app looks and functions remain similar to other OnePlus devices. Also, switching between cameras and other modes is easy too.

Coming to the quality, the primary camera captures some very good photos with fine details. Most of the time, pictures churned out from the main sensors were sharp, had good colors and accurate exposure.

The wide-angle camera also did a good job with regard to colors and HDR. However, we had white-balance and color shift issues on both primary and wide-angle cameras. Portrait mode works well with good edge detection, misses at times though. Since it doesn’t have a dedicated optical zoom sensor, anything beyond 2X produces noise and is not recommendable. The quality kind of dipped post 3X. The macro sensor under daylight condition works decently, but often looks washed out.

Under low-light conditions, the Nord produces an average output with enough light around. In much darker conditions it produces hardly usable images. However, the turning on Nightscape brightens up the photo, but the output at the end is kind of flat. The OnePlus Nord also allows you to shoot Nightscape in a wide-angle lens, but its a struggle nonetheless. At times, there are chances that you might mistake the output for the black screen. We also managed to capture a few stars, and it was not perfect.

The front camera offers better selfies than any other OnePlus phone. The 8MP secondary camera can help you to accommodate more people in the frame. To be honest I rarely take selfies and never used the ultra-wide camera except for three to four times. In terms of videography, the 4K offers a good, stabilised output with good color retention. There is a ‘Cine’ mode which cuts the top and bottom of the video to create a cinema-style aspect ratio.

Check out some of our camera samples

Nightscape Off and On 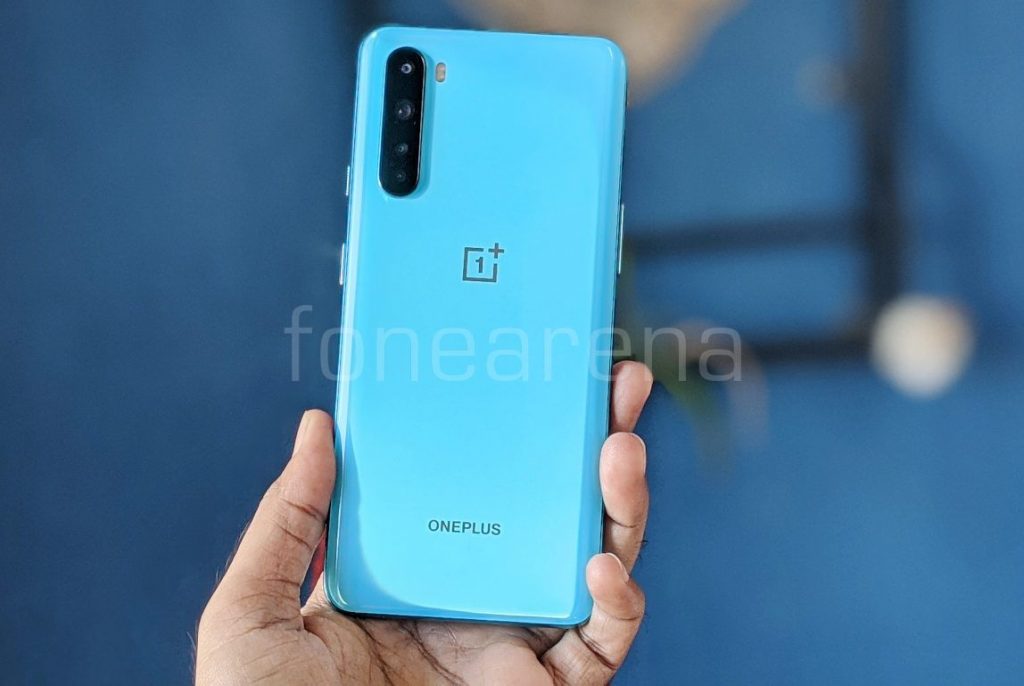 In an attempt to differentiate OnePlus Nord from other OnePlus flagship devices, the company has intentionally used this boring design that we’ve seen in a lot of Realme devices (X50 Pro, Realme 6 Pro). It’s worth mentioning, I liked the prototype design better, which Carl Pei showed off in an interview with MKBHD. For all the hype they gave, the design of OnePlus Nord looks just like any other phone. Nothing matches the matt finish and centered camera module that is available in the flagship OnePlus models. Well, this is a mid-ranger we are talking about!

Bit highly priced for the base 64GB variant

At the starting price of Rs. 24,999, we get Nord 6GB+64GB variant, which in our opinion is a bit high. Even though it looks subjective, 64GB (50GB available storage) at this point is not much, especially if you take a lot of photos and install tons of apps. Well, OnePlus offers 50GB cloud storage, but it is for a limited period, post which users have to pay for the subscription. And the 128GB variants look kind of over-priced considering the availability of other options with flagship Snapdragon 855/855+ chipset. This takes us to the OnePlus Nord’s potential competitors. 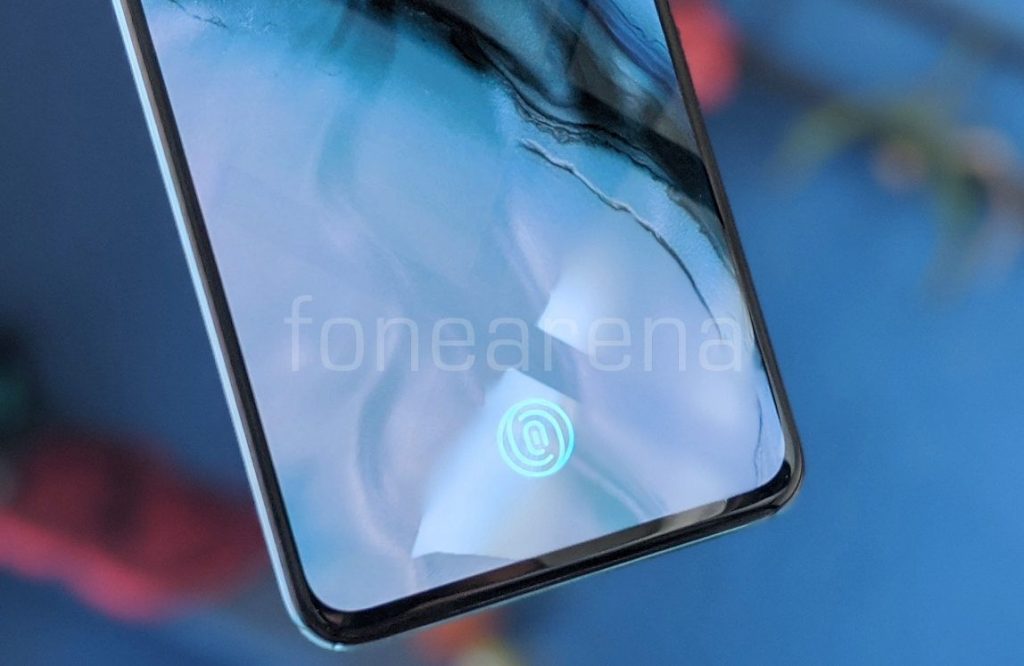 At this price point, OnePlus Nord is surrounded by numerous power-packed competitors. Here are some alternatives: 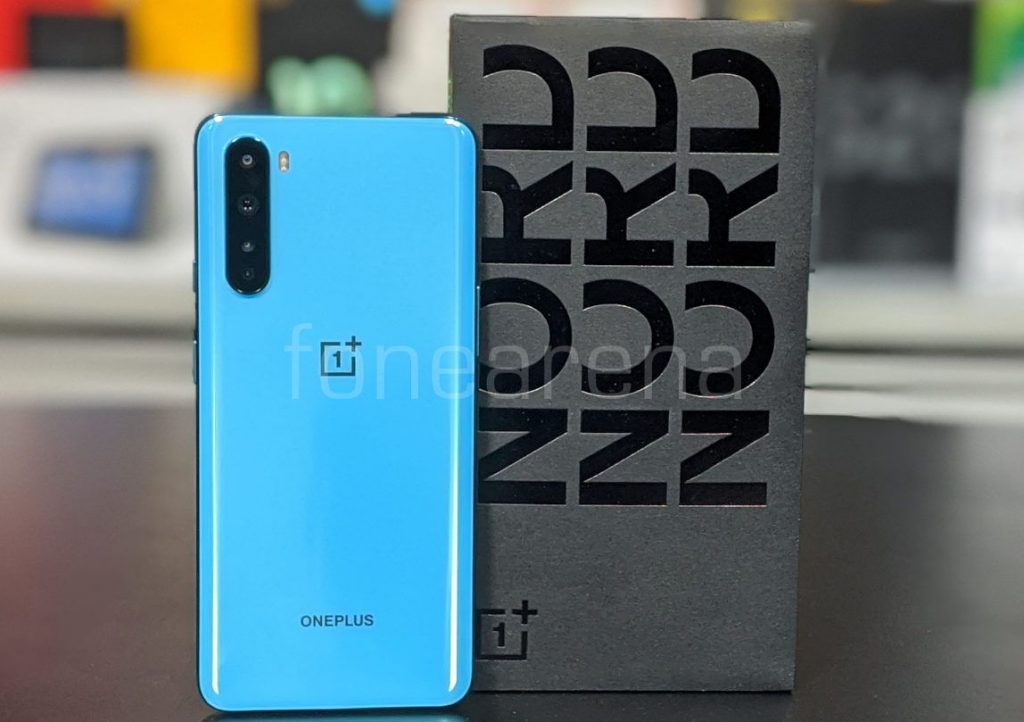 It is now available for order on Amazon.in and OnePlus.in online as well as OnePlus Experience stores, but the entry-level 6GB + 64GB Gray Onyx version will be available only in September.