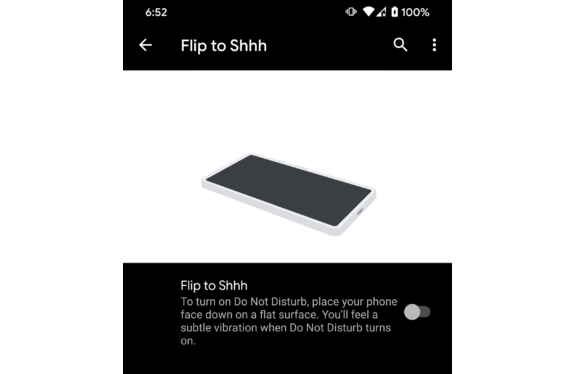 With the launch of the Pixel 3, Google introduced a gesture of flipping the phone on to its screen to enter a ‘Do Not Disturb (DND) mode. Now, with Google Phone 47 beta, they appear to be testing a more traditional use for the same gesture: silencing incoming calls. Along with this, Google is also testing a feature to answer a call with 1-way video.

When initially released, the feature called “Flip to Shhh” to turn on DND mode was exclusive to the Pixel 3. However, Google introduced it more phones via Digital Wellbeing later on. In an APK teardown of the new Google Phone app, new text and a basic setting screen for the “Flip to silence” feature can be seen. It also seems to be linked to the “Flip to shhh” of Digital Wellbeing, indicating that Google may combine the two features somehow.

Another feature that was spotted in the APK teardown was the ability to answer 1 way video calls. According to the code, the user will be able of answering a video call from the caller and user can respond via just audio. We can expect Google to add a feature to enable bi-directional video mid-way through the call too.

These features are visible in being tested in the Google Phone public beta, whose APK can be downloaded here