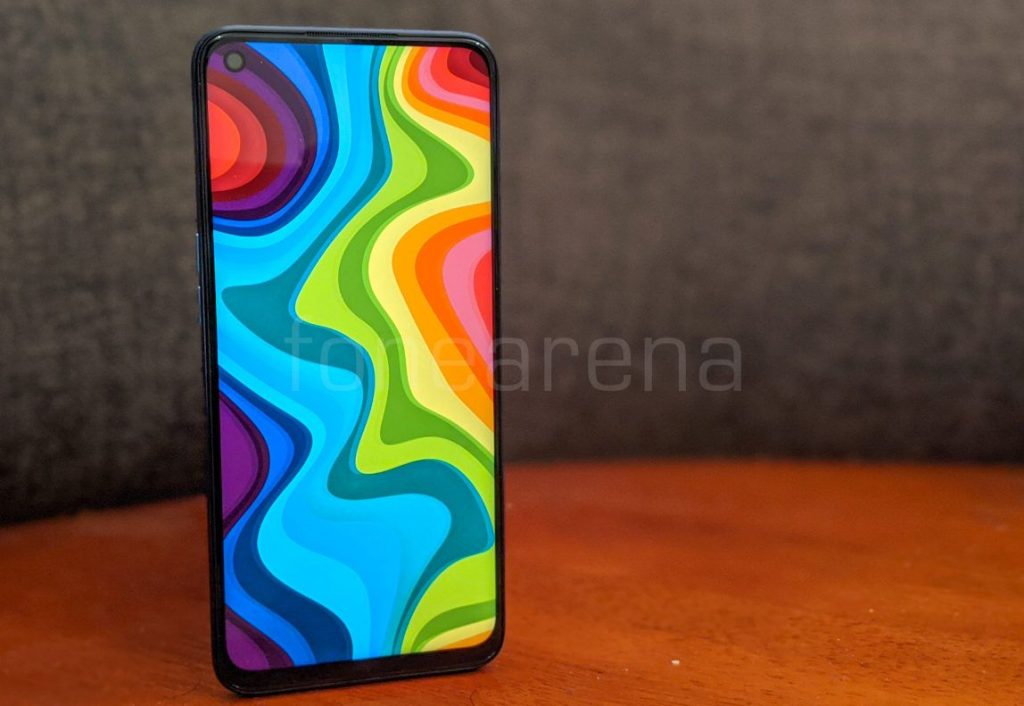 Right on the heels of the launch of its flagship X50 Pro 5G, realme released its successor to the 5 series budget smartphones, the realme 6. The smartphone’s internals have been substantially upgraded, with the biggest change being the 90Hz FullHD+ display. Being the first device in this price segment to feature a high refresh rate screen, realme is leading the charge on bringing flagship features to budget conscious consumers. Has realme designed a phone that is worth the price jump from the realme 5? Read on in our review of the realme 6 and do share your thoughts about the smartphone with us and our readers in the comment section below.

We recently unboxed the realme 6 on our FoneArena Tamil YouTube Channel along with a first impressions of using the device.

In the box we have: 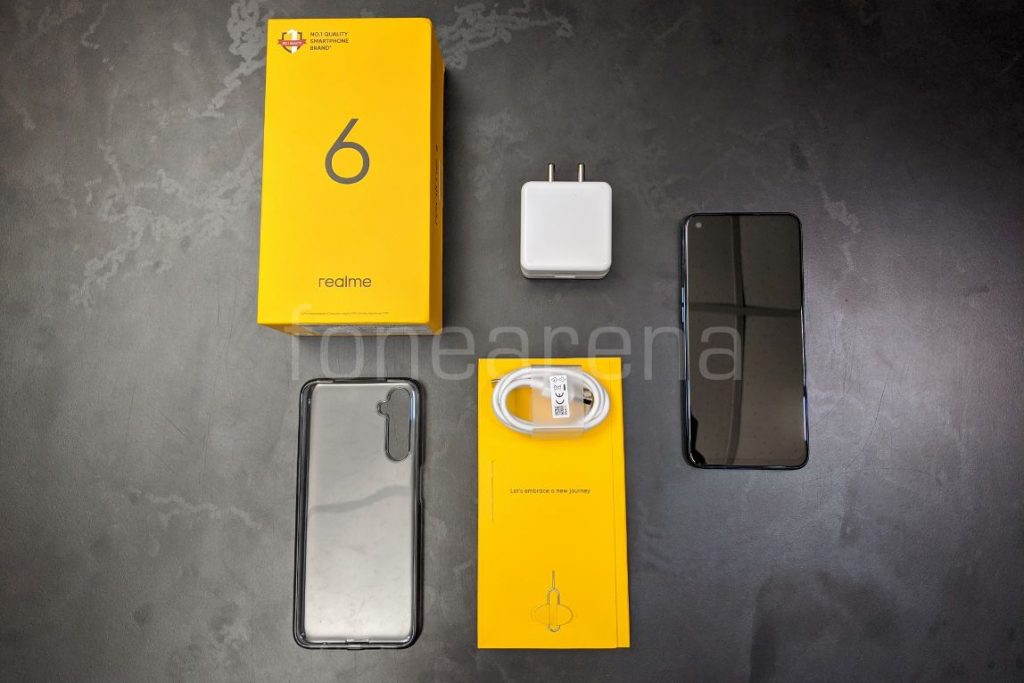 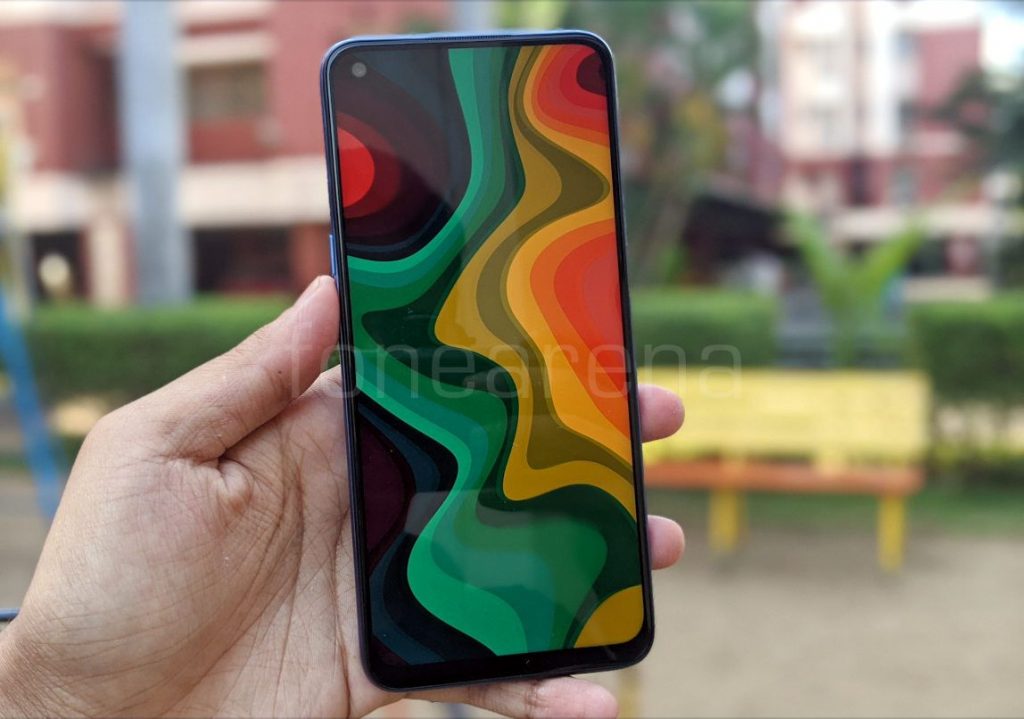 Holding the realme 6, you are greeted with a large 6.5-inch 2.5D display that is protected by Gorilla Glass 3. They opted for a punch hole cutout to house the selfie camera instead of a notched display, placing it in the top left corner. The display has an aspect ratio of 20:9 which makes the device slightly tall. Reaching the sides of the display with one hand is comfortable, but reaching the top of the display would require you to readjust your hand quite a bit. The bezels are minimal, with a chin at the bottom to give the phone a total screen-to-body ratio of 90.5%.

Coming to the ports and buttons, the left edge of the device has the volume rockers along with the slot for the tray with space for dual 4G SIM cards and a SD card slot (expandable up to 256GB). The right edge of the device has an indented power button that also houses the capacitive fingerprint sensor and the top edge is clean. The bottom edge is where realme put the 3.5mm jack, USB-C charging port, speaker grill and 2 small holes for microphones. 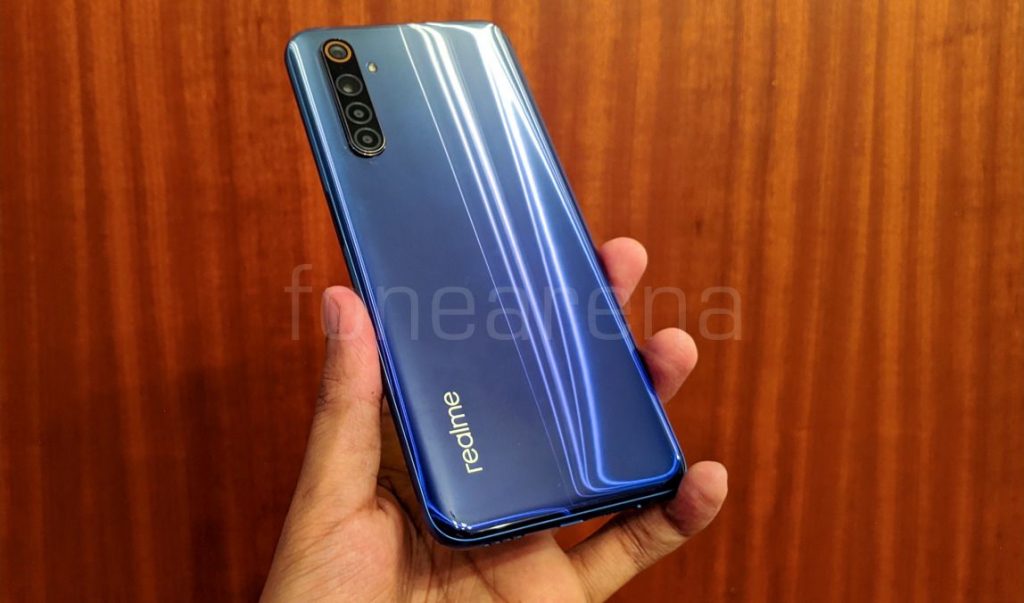 In typical realme fashion, the back of the smartphone features a beautiful glossy design that they have named as Comet design. It is made out of polycarbonate plastic that, as expected, can get scratched quite easily. The camera bump that houses the quad camera setup is quite large, causing the phone to rock a bit on a table. Fortunately, realme includes a clear TPU case that mitigates both the scratch vulnerability and the camera bump rocking. 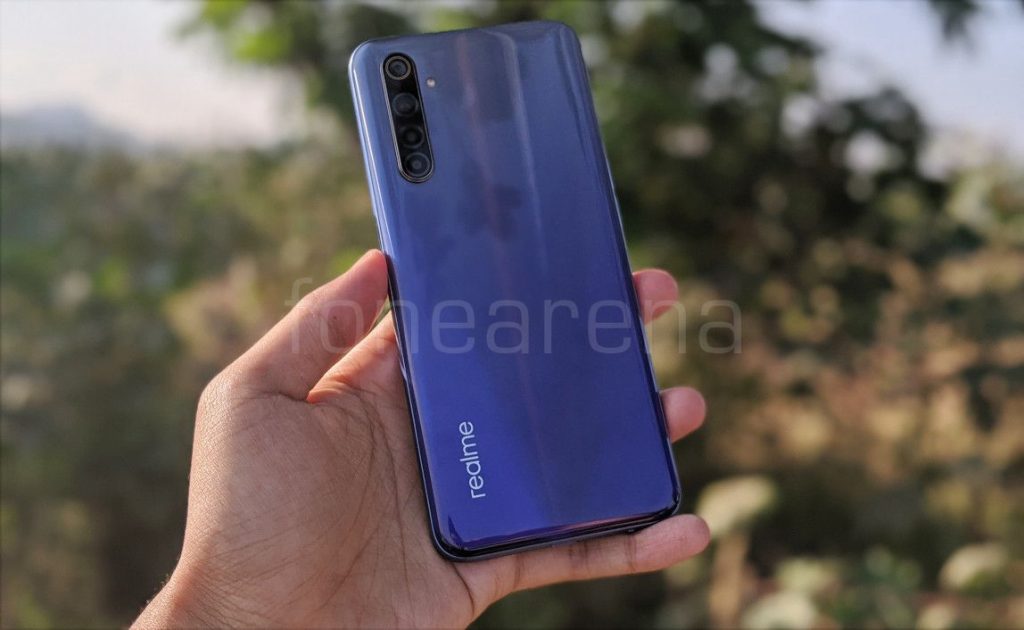 Overall dimensions of the realme 6 are 162.1 mm x 74.8 mm x 8.9 mm (9.6 mm with the camera bump). It does feel comfortable in the hand but definitely not as premium as other devices in this price segment like the Redmi Note 8 Pro. Still, for its price, it would be unreasonable to not be satisfied with the build quality of the realme 6. 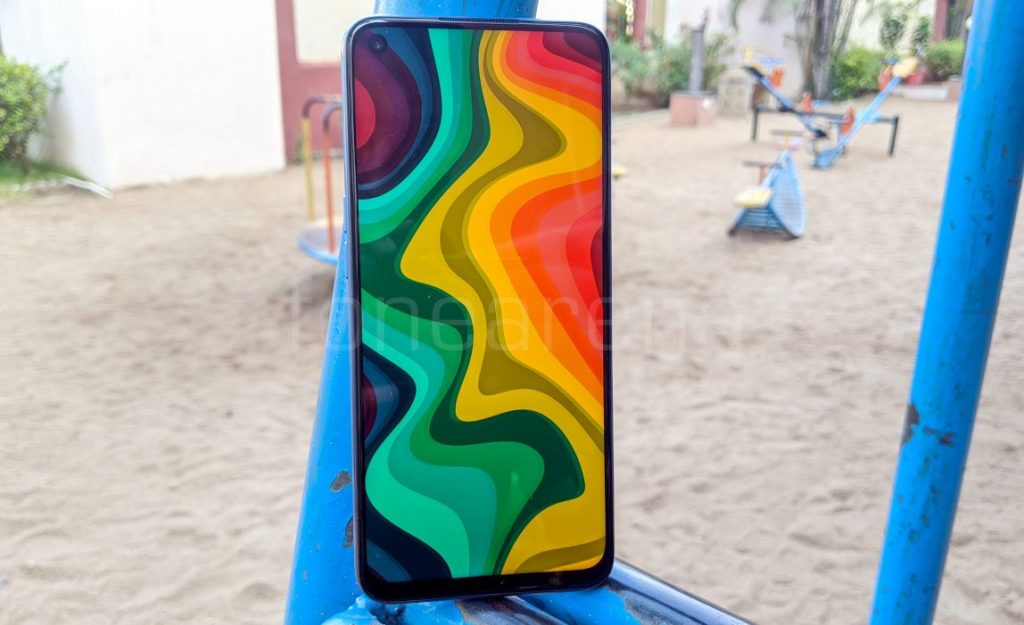 Definitely one of its highlight features, the realme 6’s display is a 6.5-inch 20:9 LCD-type FullHD+ (1080 x 2400 resolution) panel that is capable of refreshing at 90Hz. Talking about the display alone, in direct sunlight it was just visible enough, with a maximum brightness of 480 nits. Contrast has improved with a ratio of 1500:1 and it shows, with nice colours and good viewing angles, which can be expected from an LCD screen.

The 90Hz experience however, was a mixed bag. realme offers three options for choosing the phone’s screen refresh rate; 60Hz, 90Hz and Auto select, of which the last one will let the phone automatically choose the best refresh rate based on the app. During our review, we kept the display at 90Hz constantly and our experience was, on the whole, underwhelming. Scrolling and swiping did feel slightly smoother but not as drastic as a difference found on the 90Hz screens that OnePlus offers or even the Poco X2’s 120Hz screen. We think a possible reason for this is the panel technology used being LCD and not OLED, which could mean higher pixel response times and thereby reducing the perceived 90Hz effect. During gaming however, for the games that supported higher refresh rates, the difference felt more apparent and was definitely an enjoyable experience.

The realme 6 has a quad camera setup, which includes a 64MP f/1.8 Samsung S5KGW1SP03 CMOS sensor with EIS support, a 8MP f/2.3 wide angle lens that is capable of shooting with 119.1° field-of-view (FOV), a 2MP f/2.4 Macro sensor and finally, a 2MP f/2.4 monochromatic sensor that is used for depth sensing. The front camera module has a 16MP f/2.0 Samsung S5K3P9 CMOS sensor with a 79.3° FOV. Regarding video, the realme 6 is capable of shooting up to 4K 30fps and slomo videos up to 120fps at 1080p. For stabilisation, the phone uses Electronic Image Stabilisation (EIS).

realme has enabled Cam2API by default and it also has RAW support.

The camera experience on the realme 6, in our opinion, was disappointing. Photos sometimes looked over-processed with high amount of sharpening and during other times completely lacked any detail when just slightly zoomed in. Results were worse on the wide-angle lens with very different white balances and using the night-mode just shows where realme made the budget cuts with this device. Ultra-macro mode performance was sub-par too, with edges in the photo looking like a water-colour painting. And it still suffers from the same confusing interface where it says “Works best from 4cm” but offers no feedback for whether I am within that range or not.

Here are a few camera samples below:

Now to be clear, the photos are not all terrible. At this budget, it is common to see phone manufacturers not focus heavily on camera performance. We also believe that the post-processing capabilities of the ISP in the MediaTek G90T processor is a problem considering that its bigger brother, the realme 6 Pro with similar sensors and a Snapdragon processor performed significantly better. realme could release software updates to improve the camera performance but at the moment, this is where it stands.

The realme 6 is running realme UI version v1.0 that is based on Android 10 along with the February 2020 security patch. Personally, I have a strong preference for the pure android experience, so I am not particularly fond of the software but realme UI users will feel right at home. Dark mode support and Android 10 gestures are both present and realme has added a bunch of other features like smart assistant, App cloner, Game Space and more. The device does come with quite a few bloatware apps but most of them can be uninstalled fairly easily. Overall the experience was good with a few bugs here and there like the auto brightness choosing random values at times, which I am sure realme can patch in upcoming software updates.

The realme 6 does come with its own music player which is fairly feature-rich and there is also a FM radio app which supports recording, if you’re into that. Regarding speakers, the realme 6 has a mono speaker setup in the bottom edge of the phone, which is unfortunate because it can get covered easily. Performance wise it is just acceptable and is nothing special. When plugging in earphones, the audio quality is good. Realme has a special software called Real Original Sound Technology, which gets turned on when wired headsets are connected. I turned it off immediately however, since I did not like how my music sounded when it was on. It doesn’t have Dolby Atmos.

The phone is certified with Widevine L1 which means Netflix and other streaming sites should support HD streaming, but it didn’t show for us. It is not clear if this could be fixed in an update. 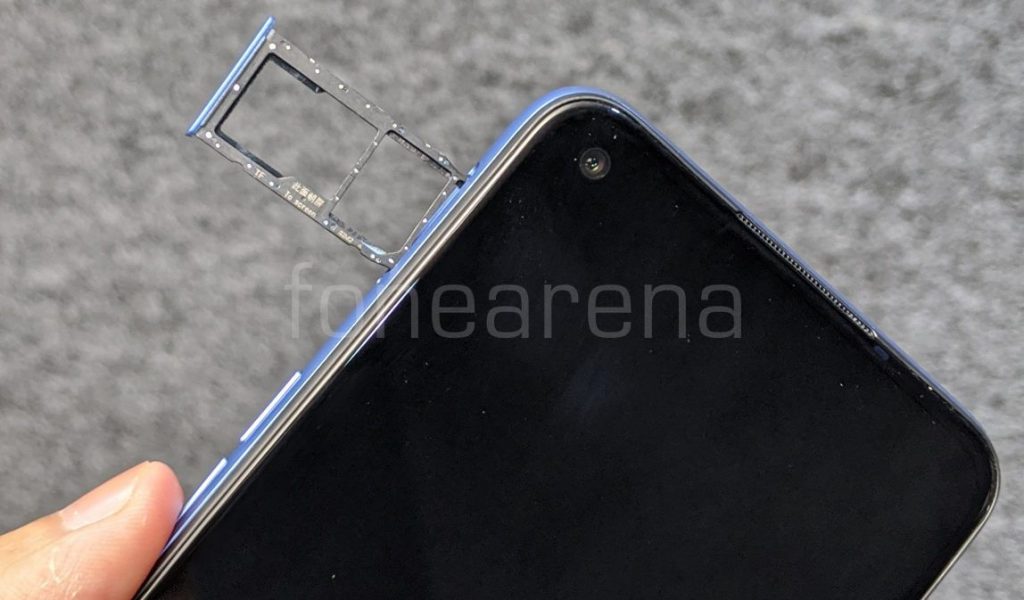 The realme 6 has two SIM slots that both support VoLTE and VoWiFi which is neat. Call quality was good and I did not face any call drops when using the phone. Regarding Wi-Fi, the phone is capable of Dual-Band Wi-Fi 802.11 ac and it also supports Bluetooth 5.0 connectivity. SAR values were recorded at Body: 0.586 W/Kg and Head: 1.138 W/Kg which is slightly high, so if you make long phone calls frequently, we would recommend using a headset. 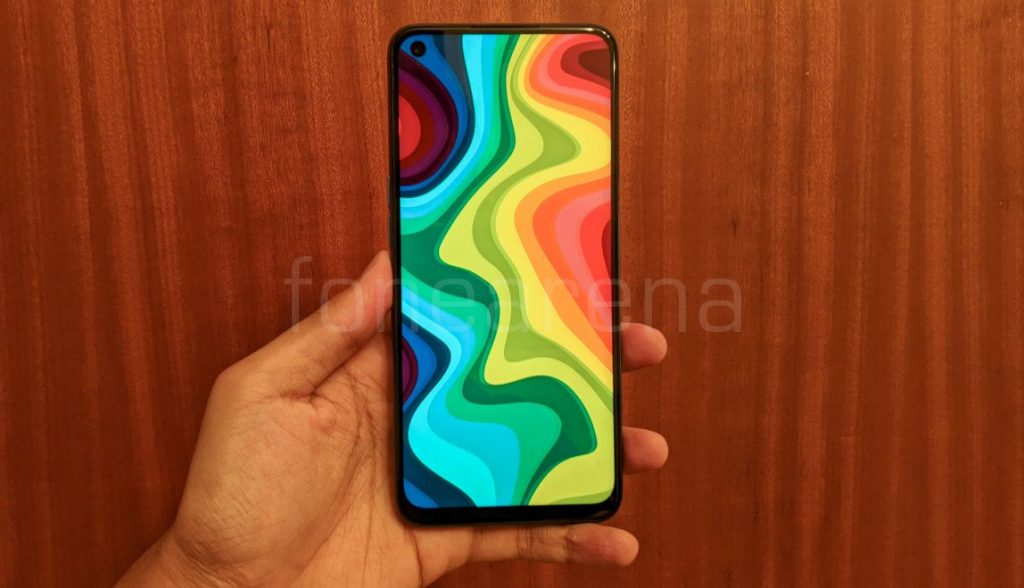 Powering the realme 6 is a MediaTek Helio G90T processor, which is an Octa-core processor with 2 Cortex-A76 cores running at 2.05GHz and 6 Cortex-A55 cores running at 2.0GHz. For the GPU, realme 6 has an ARM based Mali G76 GPU that is clocked at 750MHz. Regarding memory, they are offering 4GB/6GB/8GB of LPDDR4X RAM and for our review unit we got the 8GB variant.

Day-to-day performance was pretty smooth on the realme 6. They have done quite a bit of optimisation with the OS which, when coupled with 90Hz display, produced no real complaints. Apps opened fairly quickly and stayed open in the RAM for a good period of time. The only real issue was with the thermal performance of the phone. During regular everyday use, the phone stayed cool but when the CPU got stressed or when the phone was charging, it got really hot. When testing its gaming performance in an air-conditioned room (at 24°C), the phone heated up quickly, reaching a maximum of nearly 42°C. So under normal room temperatures, long gaming sessions with the phone would be very uncomfortable. The phone would even throttle performance if the temperature got too high, which is a shame honestly, cuz the Helio G90T is a very good performer in gaming, when it stays cool.

Check out some benchmarks below: 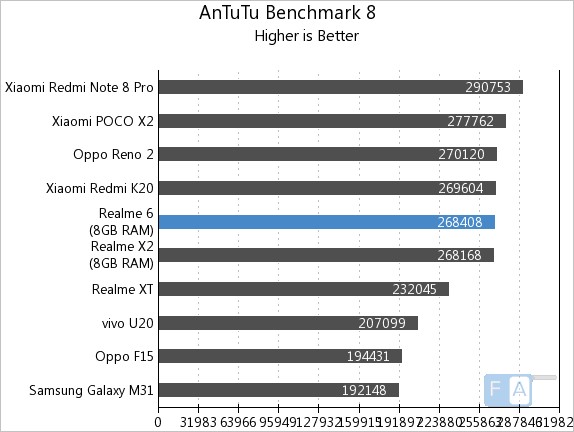 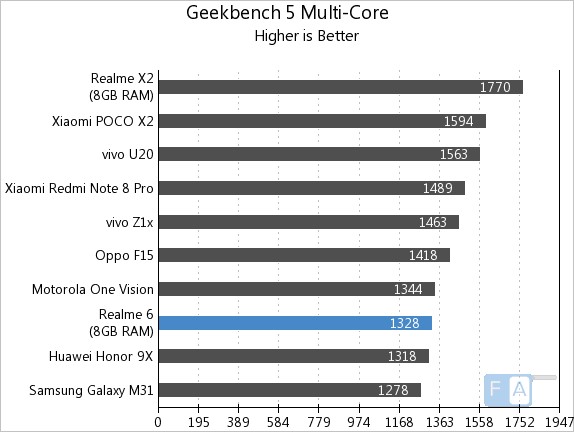 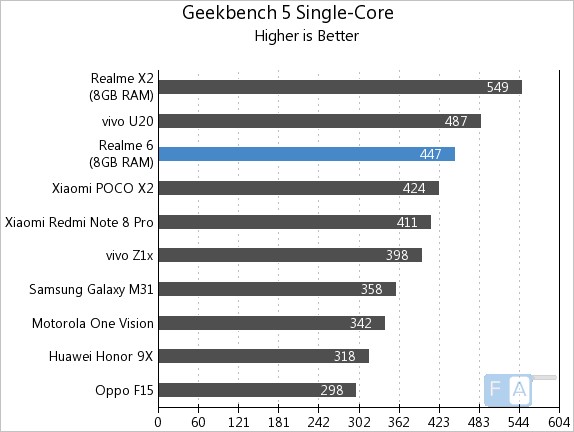 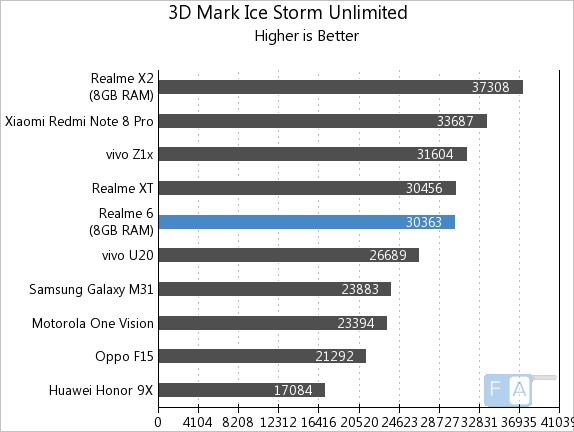 This is a department where the realme 6 really shines with its 4300mAh battery. I don’t really understand how these numbers are possible with the display locked at 90Hz, but I consistently got over 7 hours of screen-on time with this phone, even with heavy use. And as a cherry-on-top, the phone supports 30W charging which can charge the phone up from 0 to 50 in just 22 minutes, and 0 to 100 in an hour, which is insane. I am really impressed with battery life in this phone and I hope realme continues this trend with all of its phones. 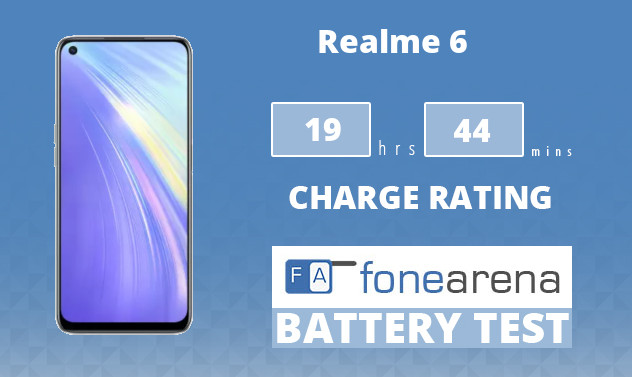 In our One Charge Rating, the phone scored 19 hours and 44 minutes, which is brilliant for a phone with a 4300mAh battery. We tested it in 60Hz refresh rate, so in 90Hz it should be slightly less.

Realme has launched this phone with a price that is starting at Rs. 12,999 for the 4GB/64GB model. At this price, it is hard to find competitors that can match the spec sheet of the realme 6. 4GB of RAM however, is a little low currently, so I would recommend getting the 6GB variant. This one is priced at Rs. 14,999 and at that price, other factors start to weigh in. There is also a 8GB RAM model at Rs. 15,999. While it does offer an amazing battery life, excellent day-to-day performance and a smooth 90Hz screen, the camera quality is poor, especially in low-light and it does have plenty of thermal issues. If these are issues that you can overlook in a phone and you really want a phone with 90Hz and a great battery life, then the realme 6 can be the phone for you. Otherwise, the only real competitor in this price range is the Redmi Note 8, whose review you can see here.

The realme 6 will be available from Flipkart, realme.com as well as offline stores starting from today March 11th. Buyers on Flipkart get flat Rs. 750 off on ICICI Bank credit cards.