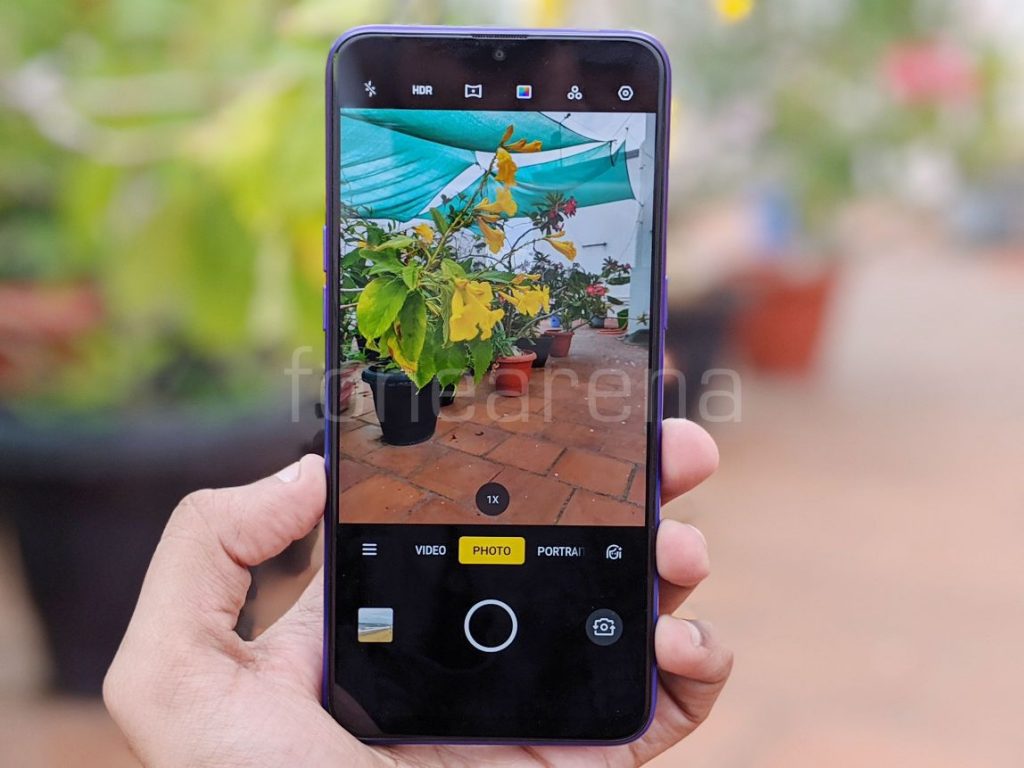 After Apple vs. Samsung, Xiaomi vs. Realme is the next big rivalry in the tech market, especially in India at present. The battle between a heavyweight and an underdog is heating up as the day passes by. Few such examples are constant jabs, fan wars, and much more on Twitter and other social media platforms.

Both companies have adopted a similar strategy — offering handsets that offer competitive specs and aggressive pricing. Almost every smartphone from both Realme and Xiaomi falls in the same price segment, which naturally becomes alternate choices for anyone looking to buy a handset.

Realme, which started as a sub-brand of OPPO, has already carved a place for itself in the Indian market. Launched by former senior Oppo executive Sky Li last year, the company has grown seven-fold, meaning its shipments skyrocketed by over 600% to surpass 2.8 million. Although Realme is still much smaller than its rivals; it seems to be ticking all the right boxes already.

A few weeks back, Realme launched 5 Pro smartphone in India at a starting price of Rs. 13,999, making it the world’s first smartphone to feature a 48MP quad-camera setup. Coming in Sparkling Blue and Crystal Green colors, this device packs some fantastic specs in this mid-range segment. We have used Realme 5 Pro in various conditions and have come up with reasons on why you should and should not buy this latest outing from Realme. Do let us know your thoughts about this device in the comment section below. 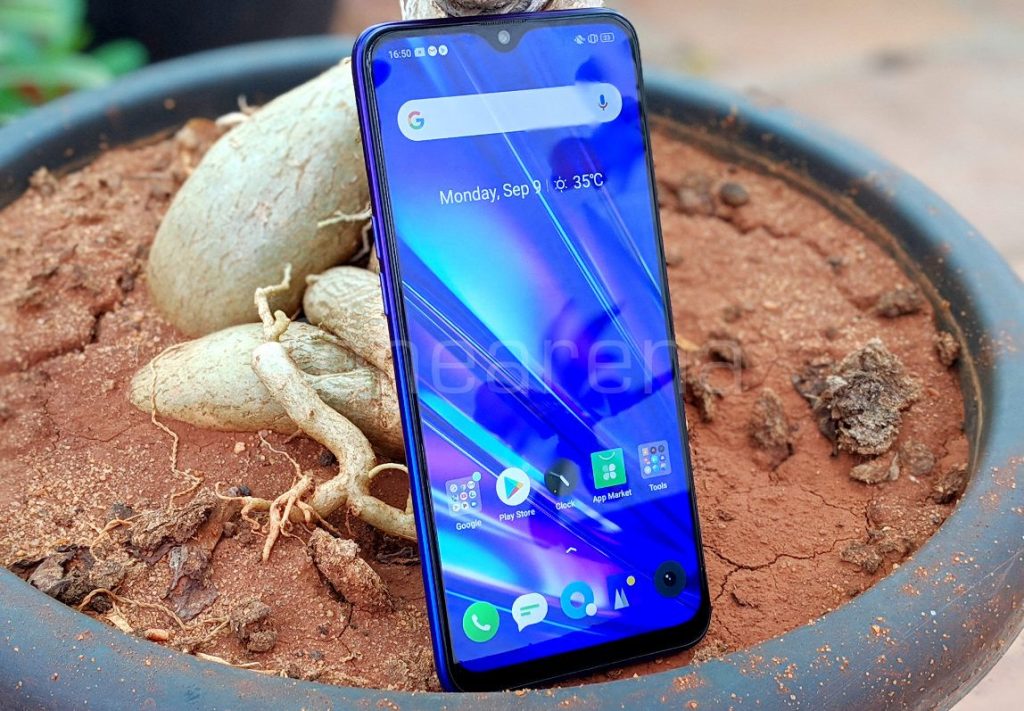 The Realme 5 Pro sports a 6.3-inch (2340 × 1080 pixels) Full HD+ display with Corning Gorilla Glass 3+ protection. The screen delivers the right amount of detail since it features a pixel density of 409ppi.  Considering the price point, we are satisfied with the LCD screen since colors are accurate, maximum brightness levels are adequate as well.

Notably, the front side looks more like Realme 3 Pro with a similar screen-to-body ratio of 90.6%. The display is reasonably legible under outdoor conditions, but the readability might take a hit under direct sunlight conditions. Viewing angles are great; consuming multimedia on this phone is a pleasant experience as well. 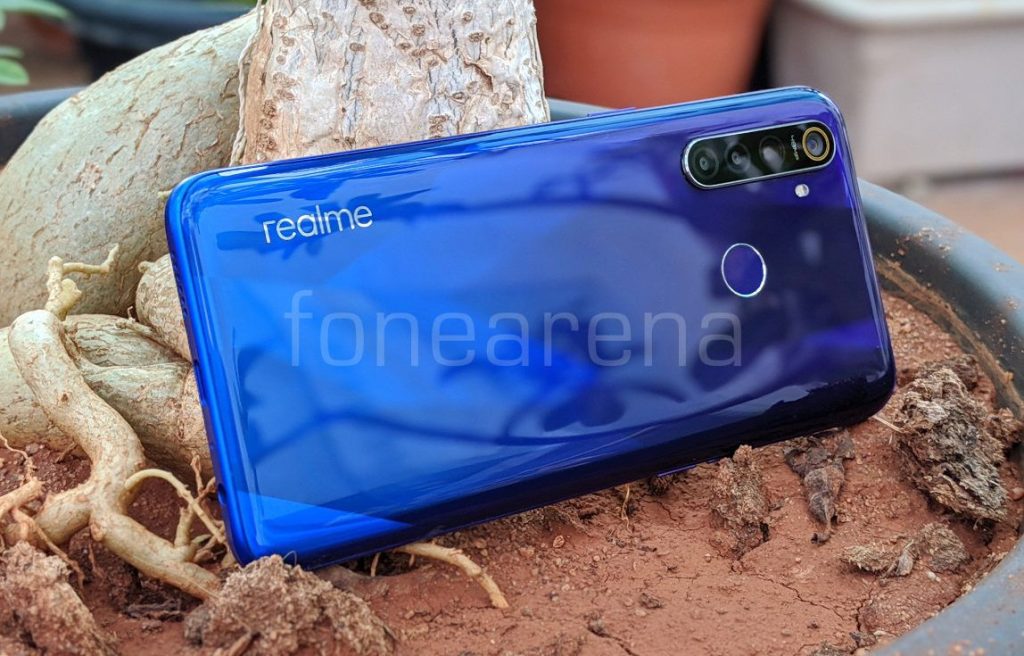 Moving on to the design, the Realme 5 Pro looks premium nonetheless featuring a Crystal design (nano-mirror technique texture) back which almost looks like facets of a diamond. Even though it looks beautiful, we are overwhelmed with this design in blue shades since every OEM releases some or the other form of a gradient blue finish.

The plastic back is susceptible to scratches if it left unprotected. We suggest you snap the bundled case that also offers decent protection during fall as well. The phone is lighter, and with the curved back, it provides a comfortable grip. Also, it attracts smudges and fingerprints on both sides. It measures 157×74.2×8.9mm and weighs around 184 grams. 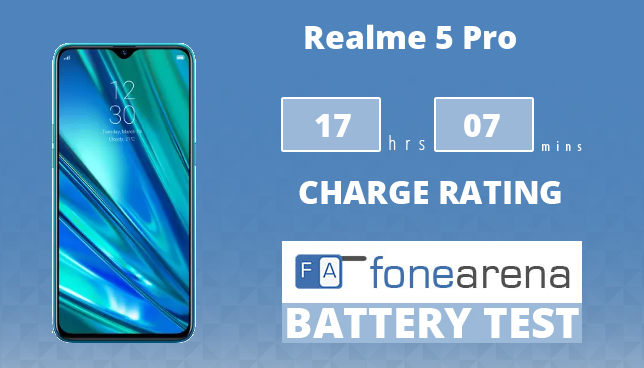 The Realme 5 Pro is powered by a 4035mAh battery with VOOC 3.0 fast charging technology. In fact, VOOC is one of the most important reasons why I’ll recommend the Realme 5 Pro, which ships with a 20W charger inside the box. It charges so fast yet there is no sign of overheating.

The battery life is nothing less than promising in this midranger! On a casual usage, the device offers more than a day usage, and when challenged with demanding tasks, the battery provides easily around a day or so.

In our One Charge rating, the Realme 5 Pro achieved around 17 hours and 07 minutes, which is better than the realme X. Furthermore, it took approximately 33 minutes to reach 50%, and took about 1 and half hour to reach 100% using the bundled 20W VOOC 3.0 charger. 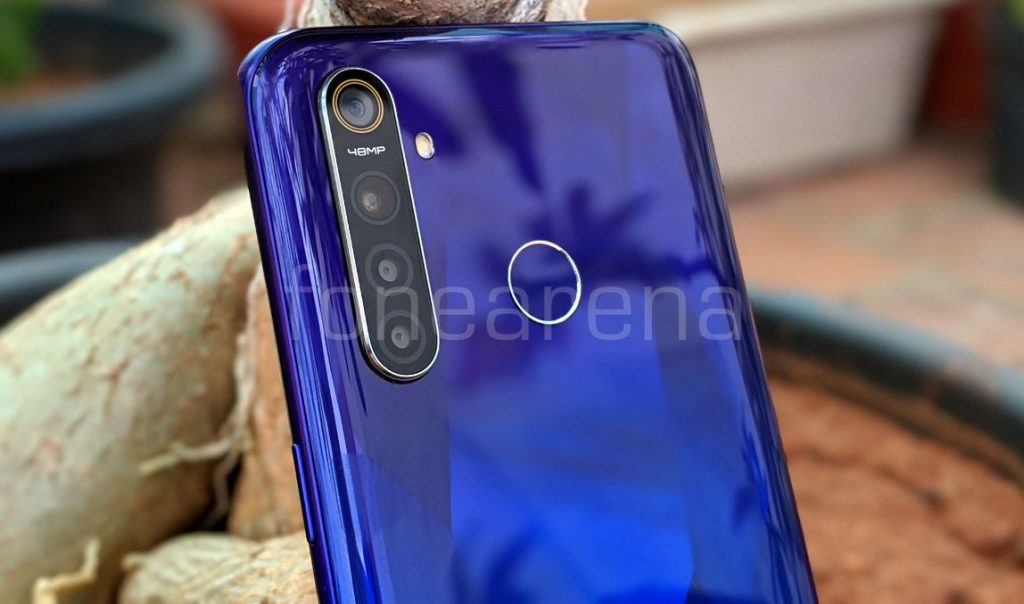 We clicked a lot of photos with the Realme 5 Pro in various lighting conditions. The result turned out to be very much positive. Amid the pre-conceived notion against mid-ranger cameras, the Realme 5 Pro clicked some beautiful picture though. Having said that, the device has its own set of flaws as well. We will talk about it on the other part.

Talking about the positives, the 48MP primary camera captures some images with better detail and sharpness. The dynamic range is excellent, capturing as much detail in shadows and highlights. It’s worth mentioning that the main camera supports pixel binning technology.

Upon enabling the Chroma Boost, the colors are a bit over the top in some photos with increased color vibrancy. The device was quick to lock focus, and we didn’t face any issues with usability as such. The 2MP depth sensor does a good job when it comes to portrait. Edge detection works the best here, giving a clean background separation even in low light. The Nightscape works very well by brightening and sharpening the image without losing details up to a certain extent.

Selfie (Portrait On and Off)

Without and with Chroma Boost

Nightscape on and off

In terms of videos, the Realme 5 Pro records at 1080p at 30fps by default with option for 60fps, but it can go up to 4K at 30fps as well. In real-world usage, the quality of videos are good, and the EIS works reasonably well. Videos look smooth and bright.

All rounding performance at the right price 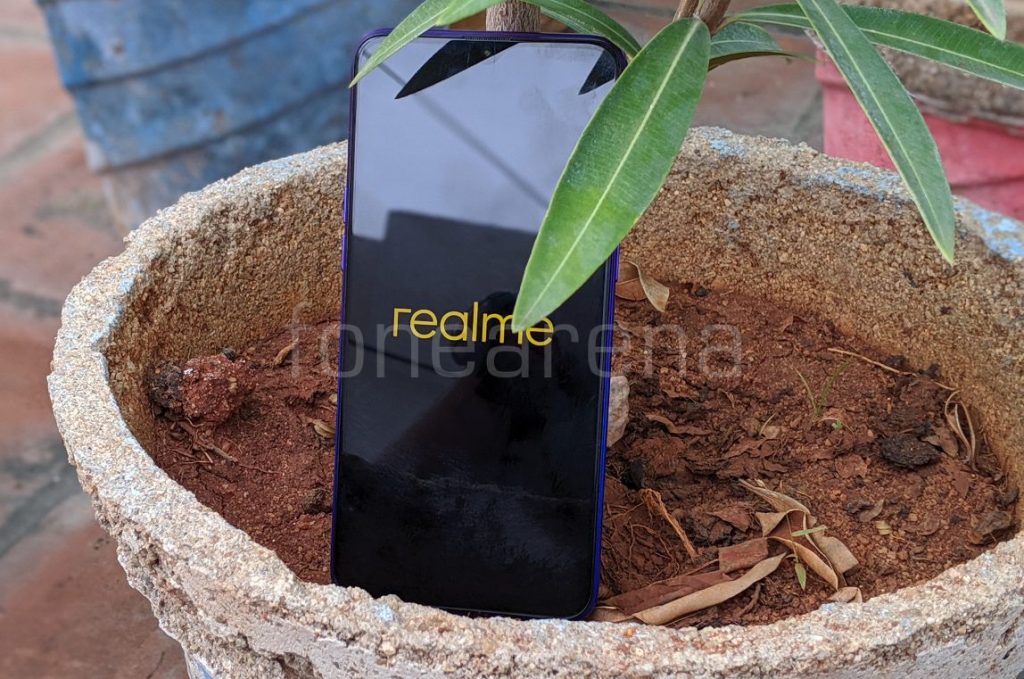 The Realme 5 Pro is powered by Octa-Core Snapdragon 712 10nm Mobile Platform with Adreno 616 GPU under the hood. This capable chipset handles day-to-day tasks effortlessly. The SD 712 has a slight edge over SD 710 which powers the Realme 3 Pro. The Realme 5 Pro is the best in gaming at this price, thanks to Adreno 616. Overall, we had no complaints about its performance. Check out the synthetic benchmark scores below. 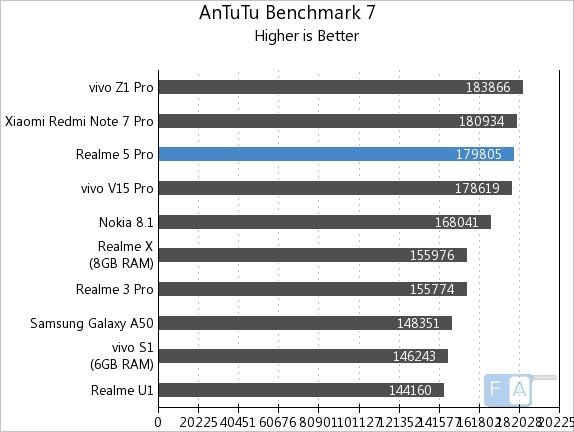 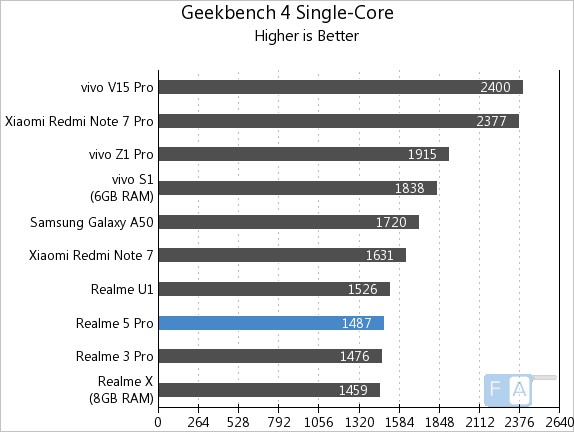 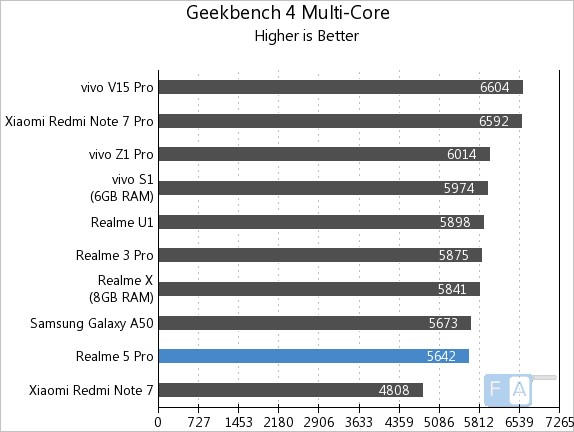 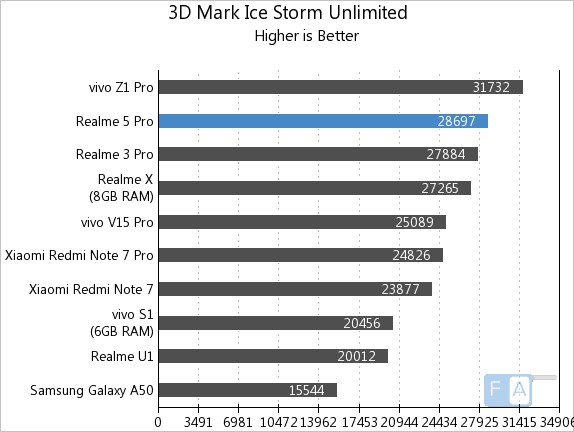 The Realme 5 Pro comes with a bottom-firing single speaker. It is loud and offers good details at a higher volume as well. The call quality through headsets and loudspeakers was good too. We had the 8GB RAM and 128GB storage variants. It is available in 4GB / 6GB (LPPDDR4x) RAM with 64GB (UFS 2.1) storage / 8GB (LPPDDR4x) RAM with 128GB (UFS 2.1) storage with expandable memory up to 256GB with microSD.

At a starting price of Rs. 13,999, the Realme 5 Pro is perfect bang for buck device. It has a lot to offer compared to its competitor at this budget. To be honest, there are barely any devices that can provide similar raw performance in this segment.

Why you should reconsider

As much as we enjoyed the 48MP primary camera, we had no clue about the usefulness of a 2MP macro camera. To reiterate, the macro lens has a fixed focus distance of 4cm with f/2.4 aperture. For the most part, we were not satisfied with the output.

When we tried closeup with the primary camera, the AI detected the ‘Macro’ scene. In this case, one might get confused about whether to switch to the Macro mode or settings changed accordingly.

Furthermore, it would have been great had they kept any sign to know the optimal distance to shoot in ultra macro mode, considering the suggestion it shows “Best quality at 4cm”.

Moreover, we also witnessed some color change due to unstable white balance. The night shots look unimpressive with lots of noise and loss in detail. The ultra-wide-angle lens comes handy when you want to fit in a lot of things in one frame. It takes decent photos, but upon zooming, the loss of details/noise is evident. 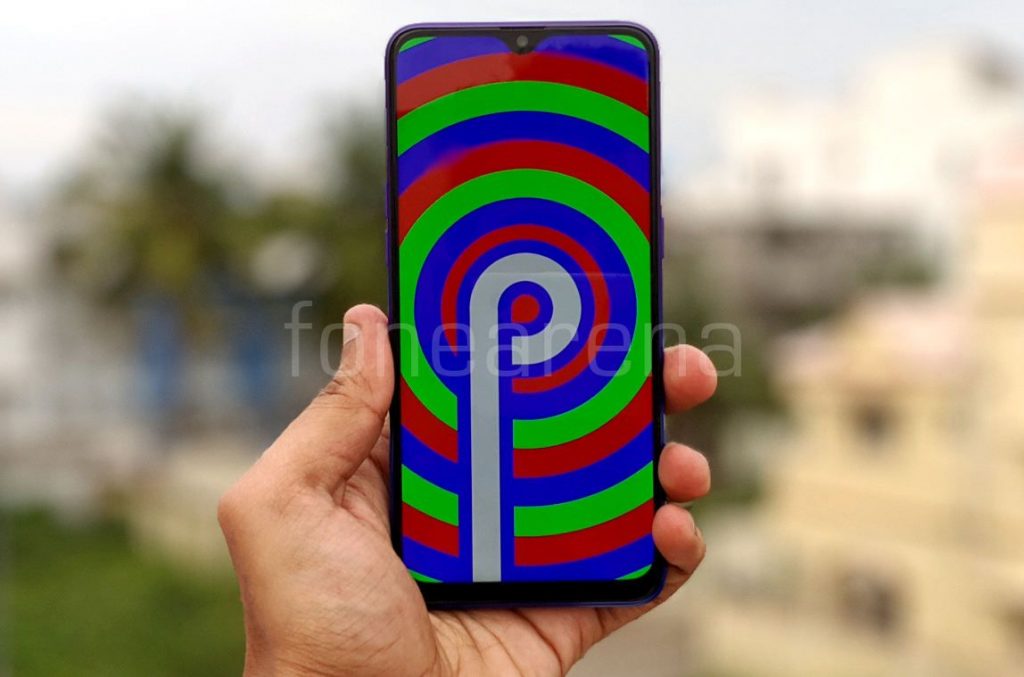 The Realme 5 Pro is shipped with ColorOS 6.0 based on Android 9.0 (Pie) and has Android security patch for July, 2019. It comes with loads of pre-installed apps, including Amazon Shopping, UC Browser, Paytm, Helo, Facebook, and many more.

Unfortunately, some of the apps can’t be uninstalled. The ColorOS 6 has been customised a bit with some visual tweaks, and the optimization is good as other custom ROMs but not as good as vanilla Android.

The company is working on a new OS by itself exclusive for realme devices. Also, we got to know that the RealmeOS will have a decent amount of customization options without much bloatware.

The Realme 5 Pro starts at Rs. 13,999 for the 4GB RAM with 64GB storage version and is available from Flipkart and realme.com through flash sale every week. The company has already announced that it will soon be available from offline stores.