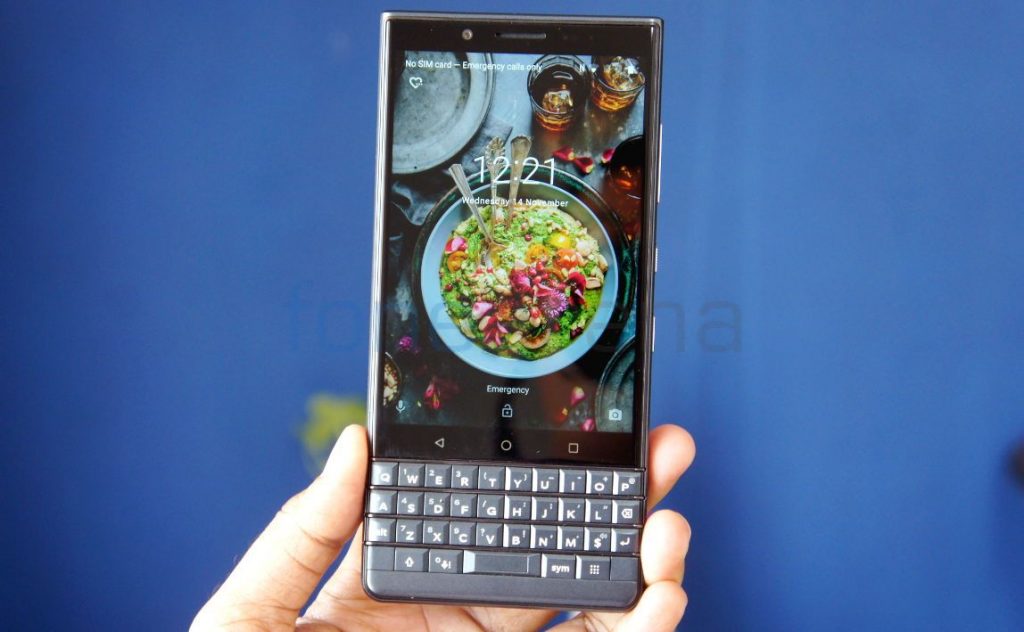 Optiemus has launched the TCL-made BlackBerry KEY2 LE, a cheaper version of the KEY2 in India last month. It was introduced at the IFA in August and has a similar design as the BlackBerry KEY2. Is the BlackBerry Key2 LE worth the price at this competitive scenario? Check it out the review below to find out. 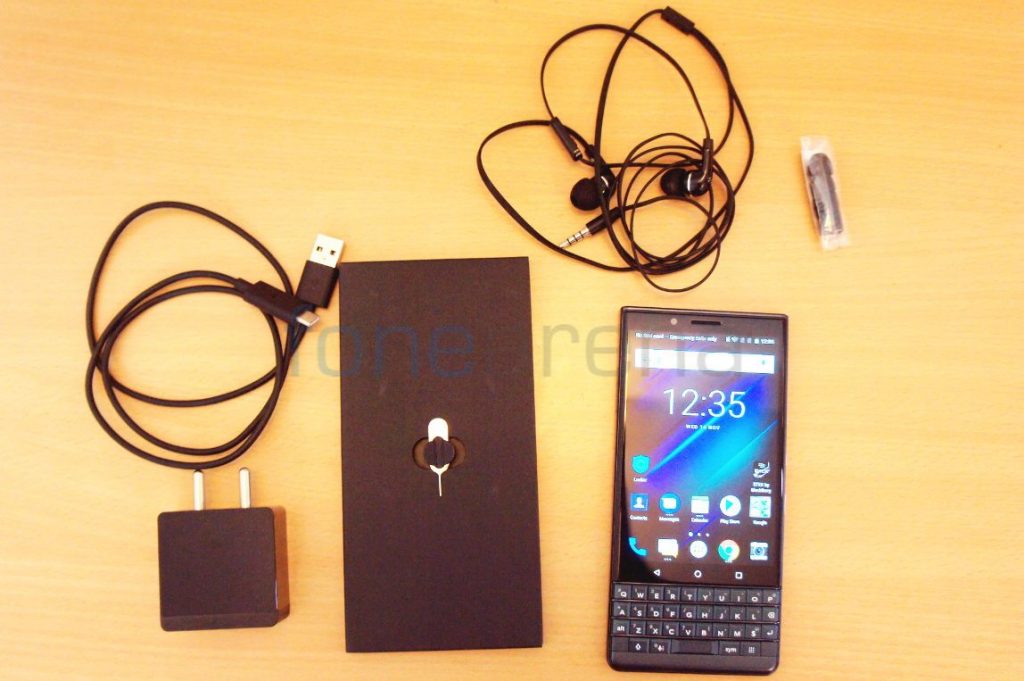 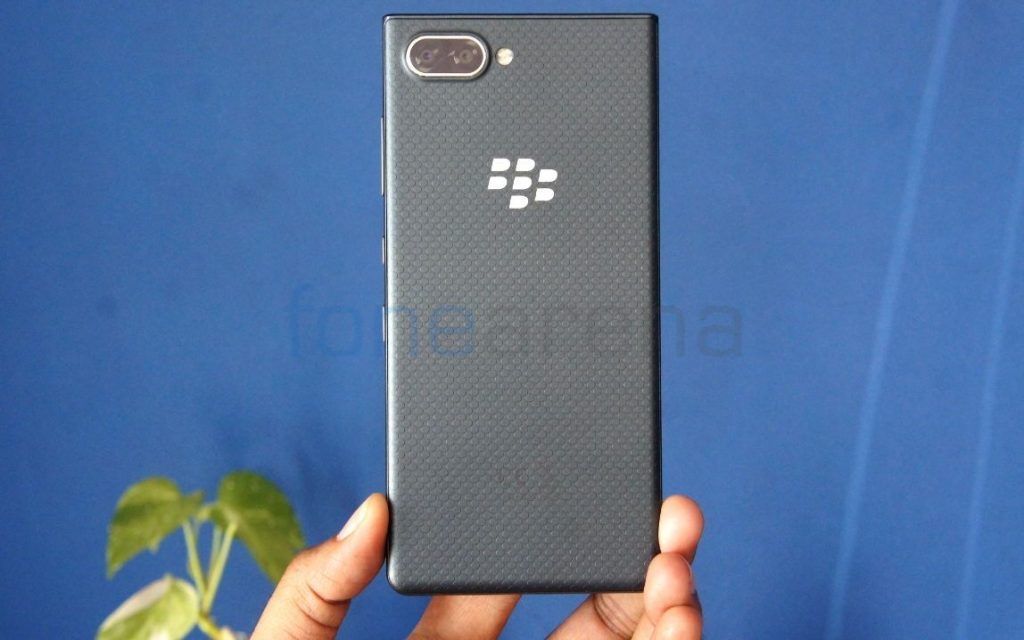 The BlackBerry Key2 LE looks boxy and identical to Key 2 but with some cheaper stuff. This stripped-down version of Key 2 comes with a polycarbonate body with a solid build quality.  It features a lightweight polycarbonate frame and a new designed soft textured back that will offer a better in-hand grip to prevent drops. The device is both thinner and lighter and boasts a redesigned keyboard with keys that are nearly 10 percent larger than those featured on the BlackBerry KEYone. Undoubtedly, this device offers a good build quality under the mid-range segment. The phone measures 8.35 mm in thickness and weighs around 156 grams. It’s worth mentioning that it doesn’t feel too cheap at all, which itself is positive. 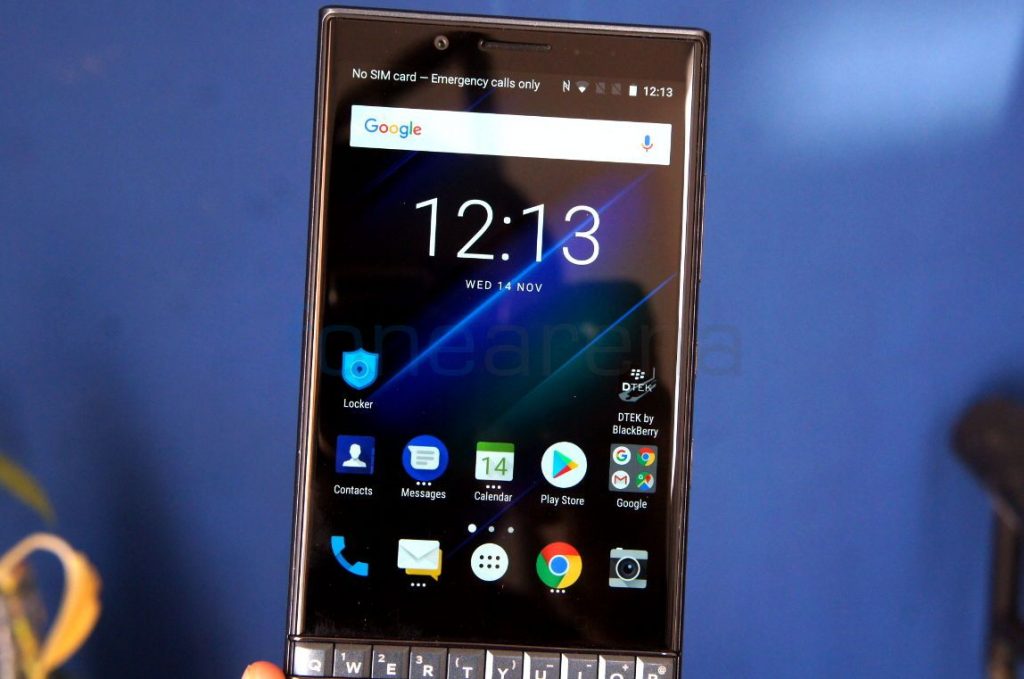 Moving on, the BlackBerry Key 2 LE sports a 4.5-inch (1620 x 1080 pixels) 3:2 display with 433 PPI and Corning Gorilla Glass 3 protection. Just below the display, a large chunk has been occupied by QWERTY key resulting in a 3:2 aspect ratio. A few people still prefer typing with a physical keyboard and if that’s you by any chance, you need to ask yourself whether you’re willing to trade a significant amount of screen space for your preference. While each and every smartphone makers out there trying to get rid even the tiniest of bezels, here’s BlackBerry doing the straight opposite. 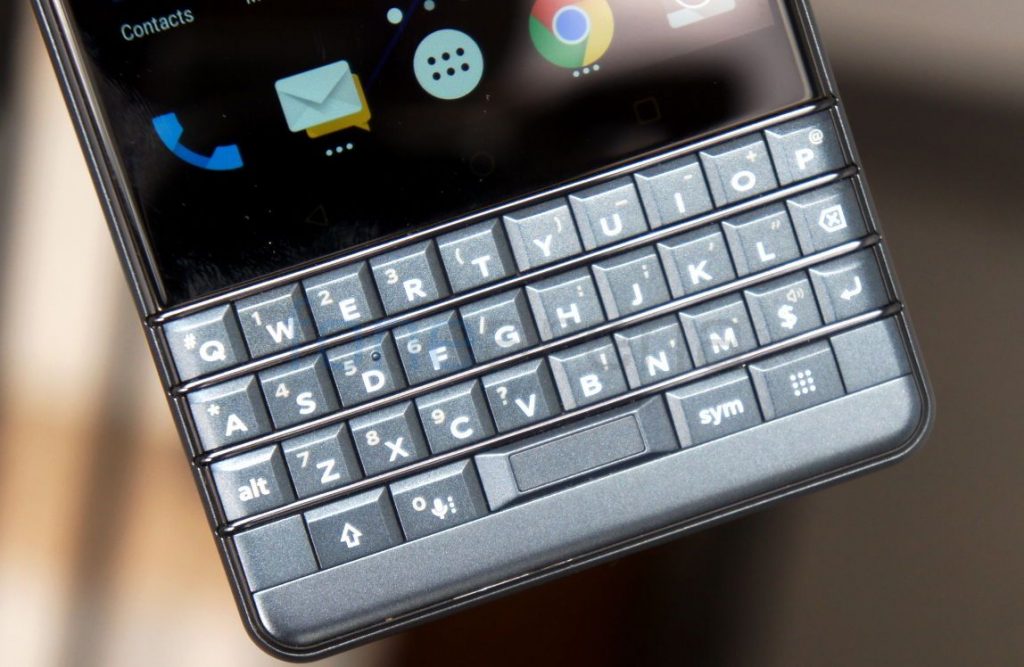 With this device, touch interaction feels uncomfortable especially during navigation and web browsing. The keyboard is smaller than Key2’s, yet typing feels smooth and good. The display is bright, clear and colourful, and works well for checking emails, browsing social media apps like Twitter and Facebook. If you are into watching videos on Youtube and Netflix, it’s better to stay away.

Talking about the design, the Key 2 LE takes a cue from its expensive sibling Key 2. On the base of the phone, there sits a USB-C port alongside a speaker and microphone. The right side of the device adorns three buttons, while the left side has Hybrid dual SIM (nano + nano / microSD)slot.  The Speed Key is complimented by 52 customizable shortcuts, so you can program each key to instantly bring up the contacts and apps you use most. Up top, we have 3.5mm audio jack and a secondary microphone as well. Turning back, we have a dual camera set up along with dual-tone LED Flash. 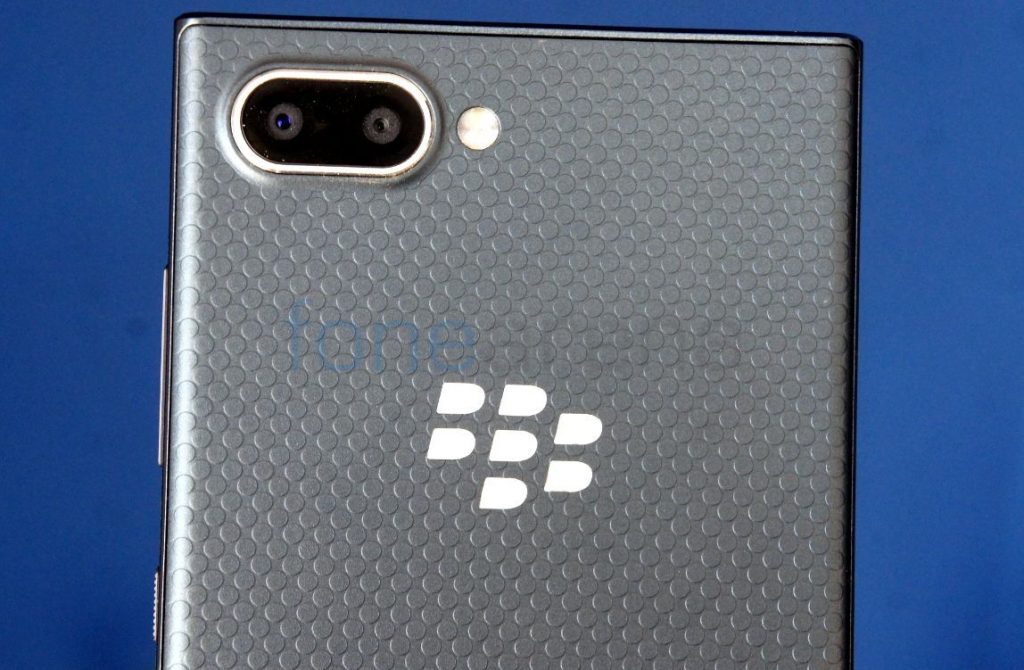 The BlackBerry Key 2 LE comes with a 13MP rear camera with dual-tone LED Flash and a 5MP secondary rear camera. The front side is taken care of 8MP selfie shooter. When it comes to the images, the Key 2 LE offers detailed images under perfect daylight conditions. Under the portrait option, there is a good solid separation between foreground and background, thanks to the 5MP secondary camera. On the other hand, low-light images contain a lot of noises. Images with flash were good and the flash is not overpowering even in closeup shots.

The BlackBerry Key 2 LE is powered by Android 8.1 (Oreo) out of the box with Android security patch for October, 2018. It comes pre-installed with the provision of the DTEK security app, which monitors the system for vulnerabilities and makes suggestions accordingly.

There is a convenience key which comes pre-programmed to launch Google Assistant, but you can remap it to launch any app of your choosing. In addition to that, there are BlackBerry apps like Hub, BBM built into the service. This device comes with 4GB RAM, 64GB internal storage, expandable memory up to 256GB with microSD. Out of 64GB, we got around 53GB free space. 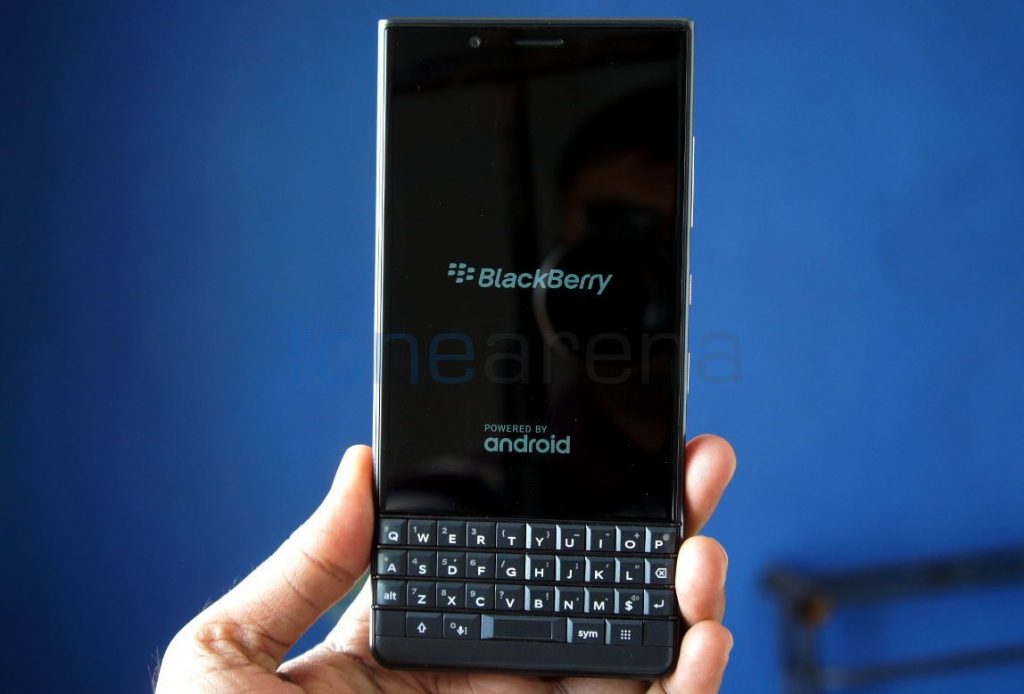 The BlackBerry Key 2 LE is powered by an Octa-Core Snapdragon 636 14nm Mobile Platform clocked at 1.8GHz with Adreno 509 as GPU. In our day to day usage, we never found any lag or hang, even with some heavy application usage. The multi-tasking was smooth, thanks to 4GB RAM, The Snapdragon 636 SoC is a good performer and battery efficient too. Gaming performance was good too sporadic frame rate stutter. Notably, the heat management in this device is on point. Check out some synthetic benchmark scores. 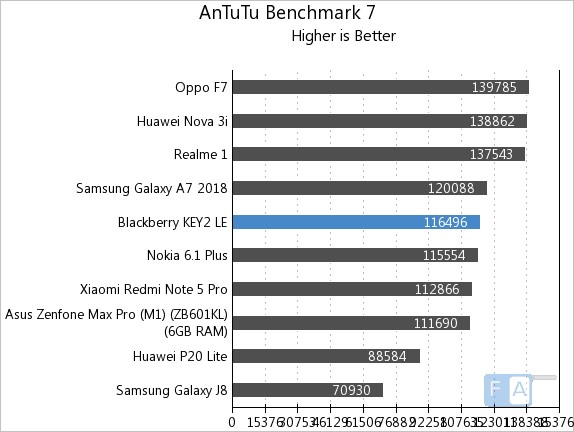 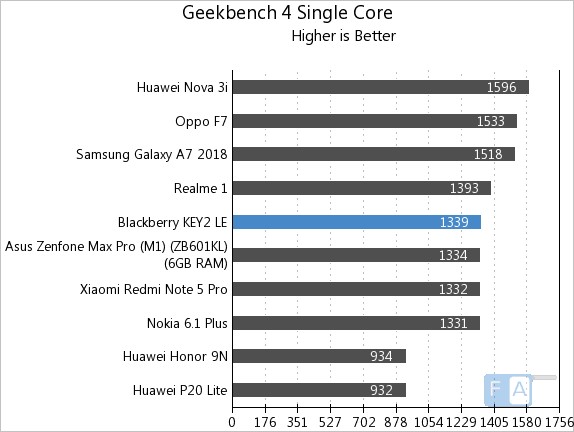 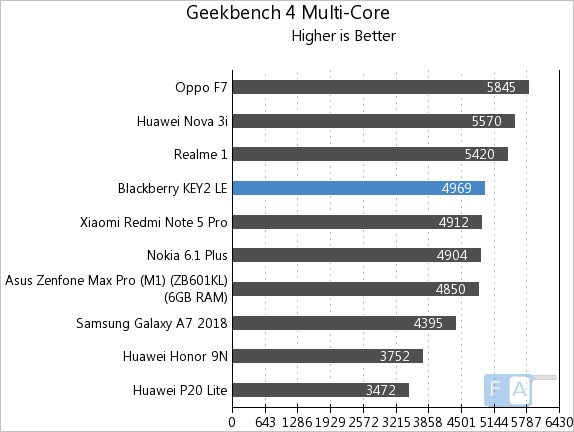 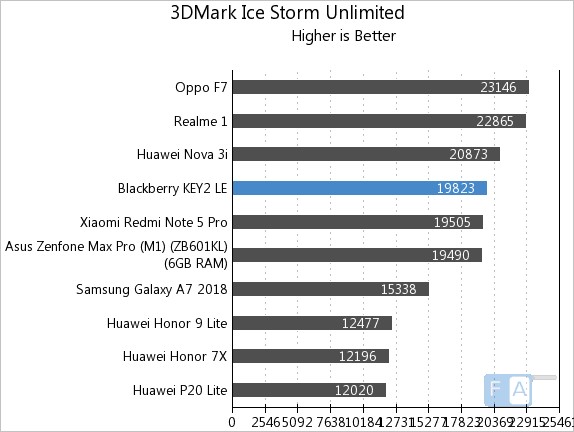 The BlackBerry Key 2 LE supports connectivity options like 4G VoLTE, Wi-Fi 802.11 ac (2.4 & 5 GHz), Bluetooth 5 LE, GPS / GLONASS, and NFC. Moving on, the call quality is good, and we did not face any call drops and earpiece volume was loud as well. The audio output through headphones is excellent in quality, but the volume level is a letdown. Moreover, it comes with a single, bottom firing loudspeaker. The loudspeaker is significantly good indeed. This device also supports FM Radio as well. 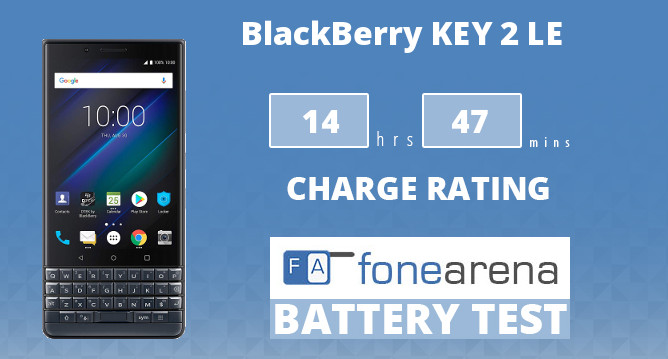 The BlackBerry Key2 LE comes powered by a 3,000mAh battery with Quick Charge 3.0. Having said that, the battery back up is average both in terms of standard and heavy usage. With that being said, we got around a day of battery life in standard usage and falls short during heavy usage. Having said that, this device is well-optimised between hardware and software to last longer than expected.

In our One Charge rating, it achieved rating of 14 hours and 47 minutes, which is decent, but it could have better. BlackBerry says that it can be charged up to 50% in just 36 minutes, and the phone gets charged fully in about one and half hours.

In this modern, bezeless, big-screen smartphones era, it is good to have an option like BlackBerry 2LE with a physical keyboard. This device might not appeal for the larger part of the audience since it doesn’t tick any criteria as per the user requirement. The Blackberry Key 2LE is neither a media consumption device, nor the fastest one as well. If you leave the Rs. 29,990 price tag out of the equation, BlackBerry 2LE is an above average device with a good build quality, average camera and smooth performance. It comes in Slate Blue, Champagne and Atomic colors and is available exclusively from Amazon.in.