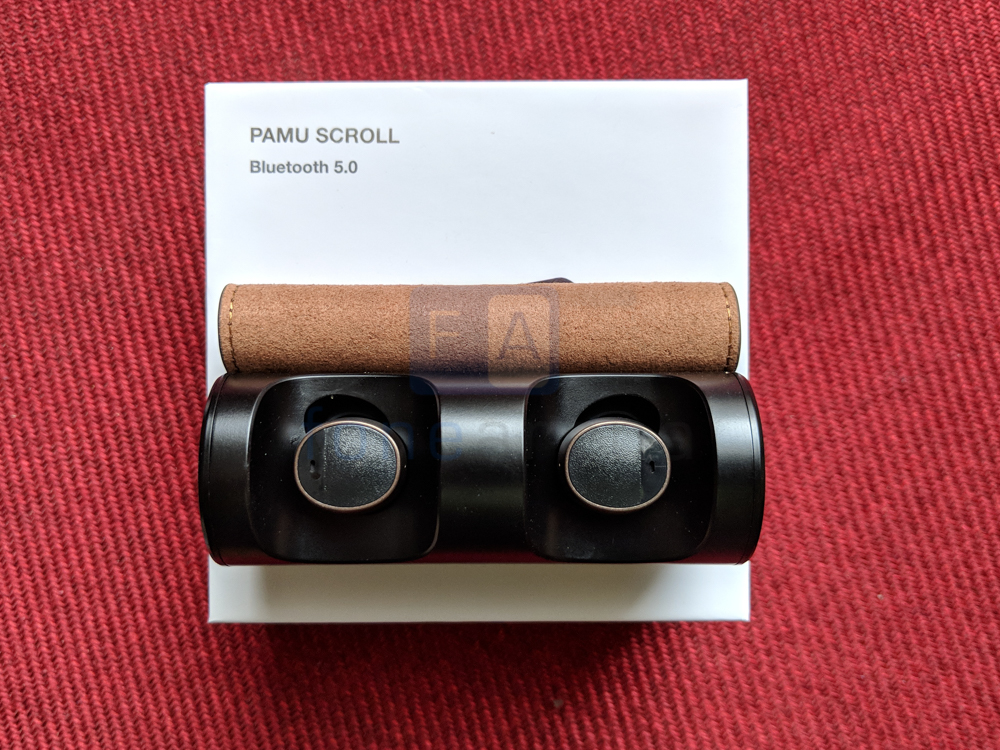 As an increasing number of smartphones ditch the headphone, there has been a drastic uptick in the consumer adoption of wireless headphones. Amongst these is the all-new category of truly wireless options. The PaMu Scroll is one such which aims to deliver a high-quality audio experience at a not too high price point. Read on for our full review.

Design
One of the key selling points of truly wireless headphones is the minimal design that it allows. Two earbuds and that’s just it with no connecting wires. The Pamu Scroll however takes it to the extreme. These are some of the smallest earphones I’ve come across and it is incredible how much technology they are able to pack within their size. 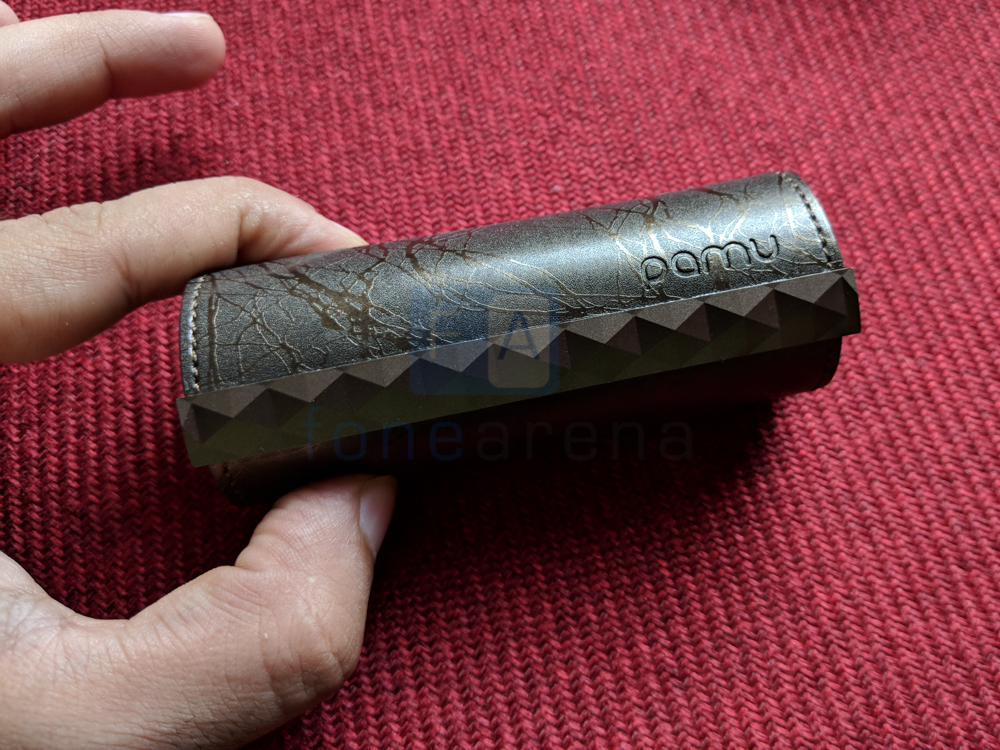 The charging case of the Scroll is as much a part of the headset, so let’s start from there. Pamu offers a choice of variants in the material of the case including . 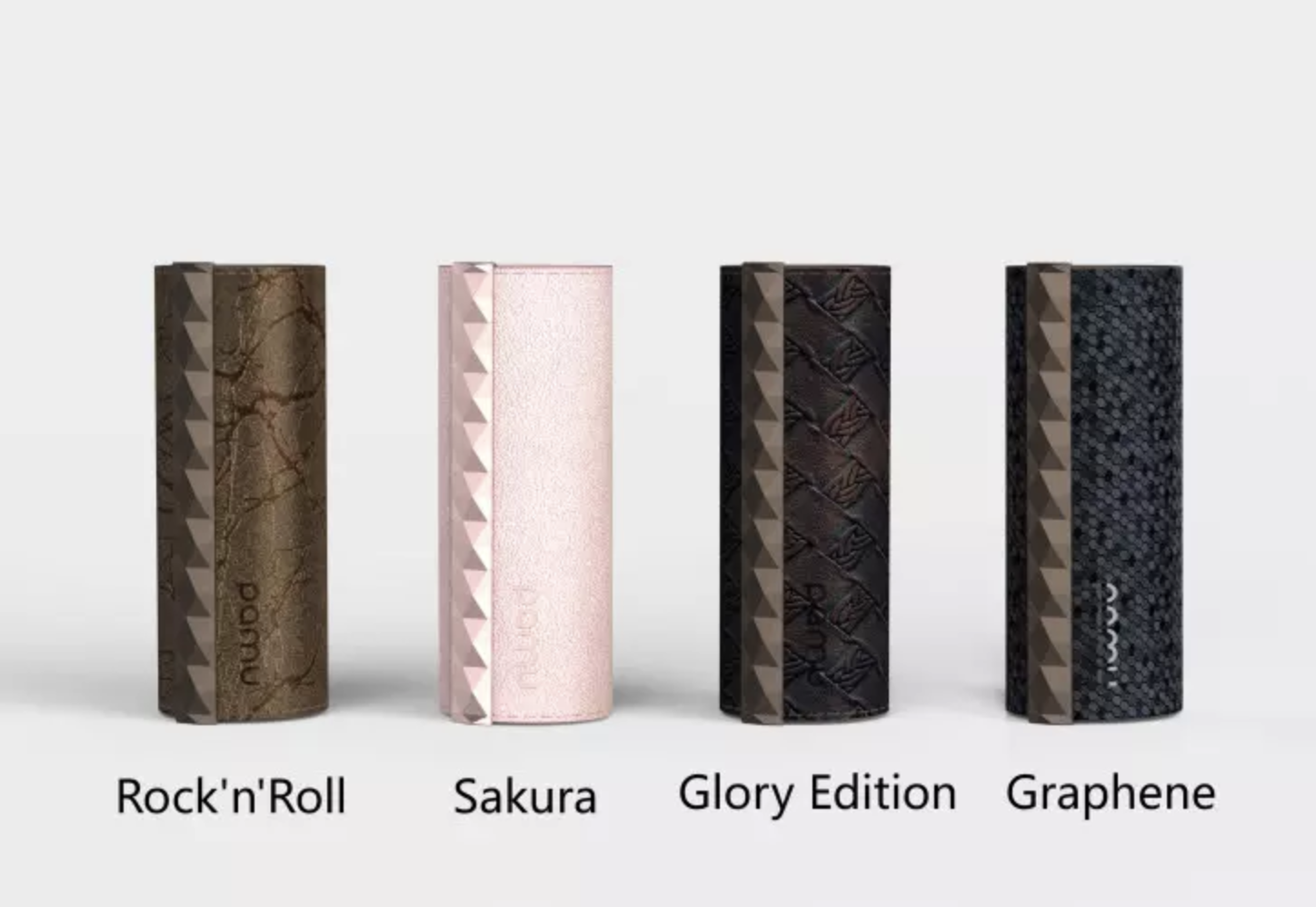 We’ve got the ‘Rock’n’Roll Edition’ here and if nothing else, it looks distinctive amongst the sea of plastic or metal cases. The leather wrapping covers the central frame and is equipped with a magnetic latch to keep the cover in place. 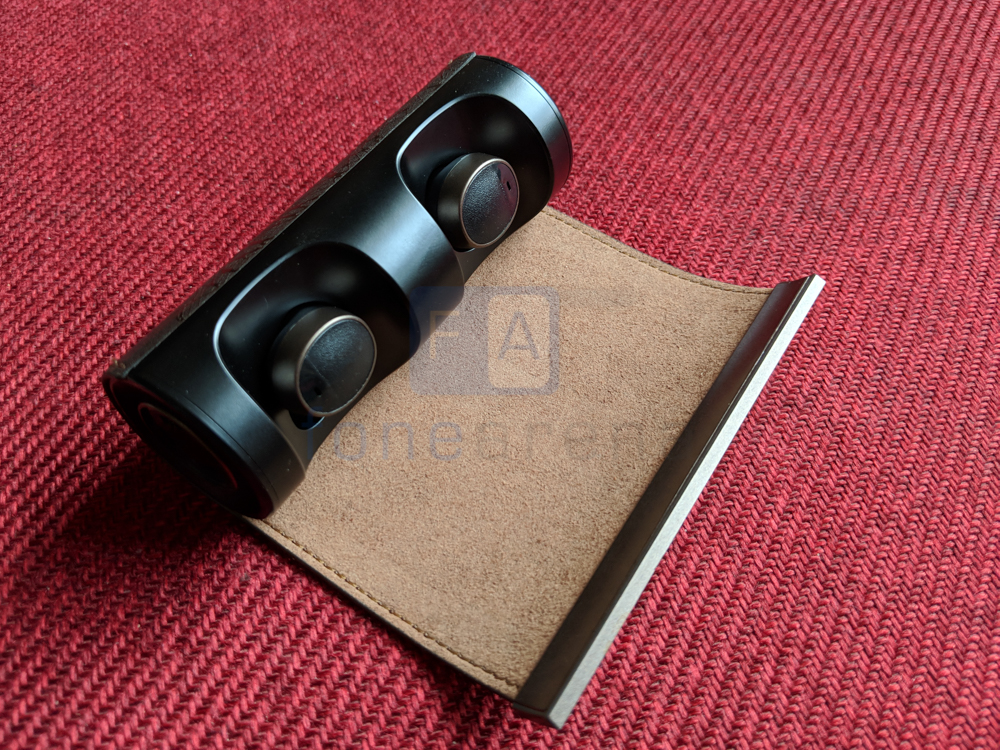 Within it is a receptacle for the earbuds allowing them to easily slot in and charge using the pogo pin connectors. The entire tube easily fits into your average jeans pocket unless you swear by skinny jeans. 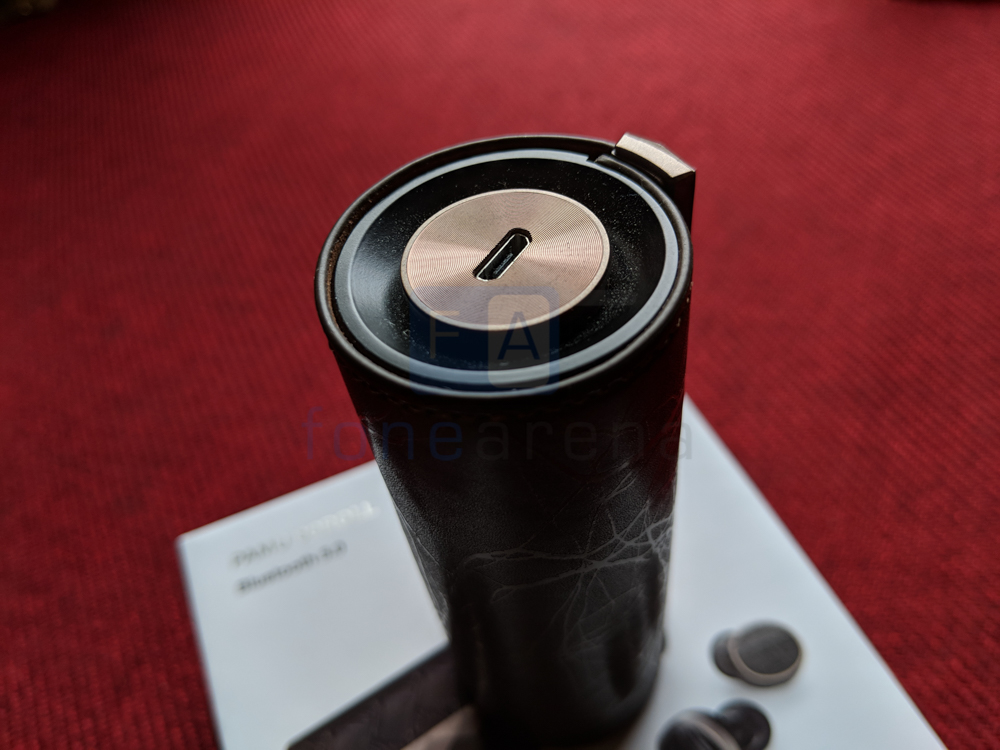 Outside, one end of the tubular Pamu Scroll sports a microUSB jack for charging. The case lights up internally with blue LEDs when put on charge. Pretty straightforward. Pamu gives you the option to purchase a tiny wireless charging adaptor that essentially slots into the microUSB port and has a Qi coil on the other side. 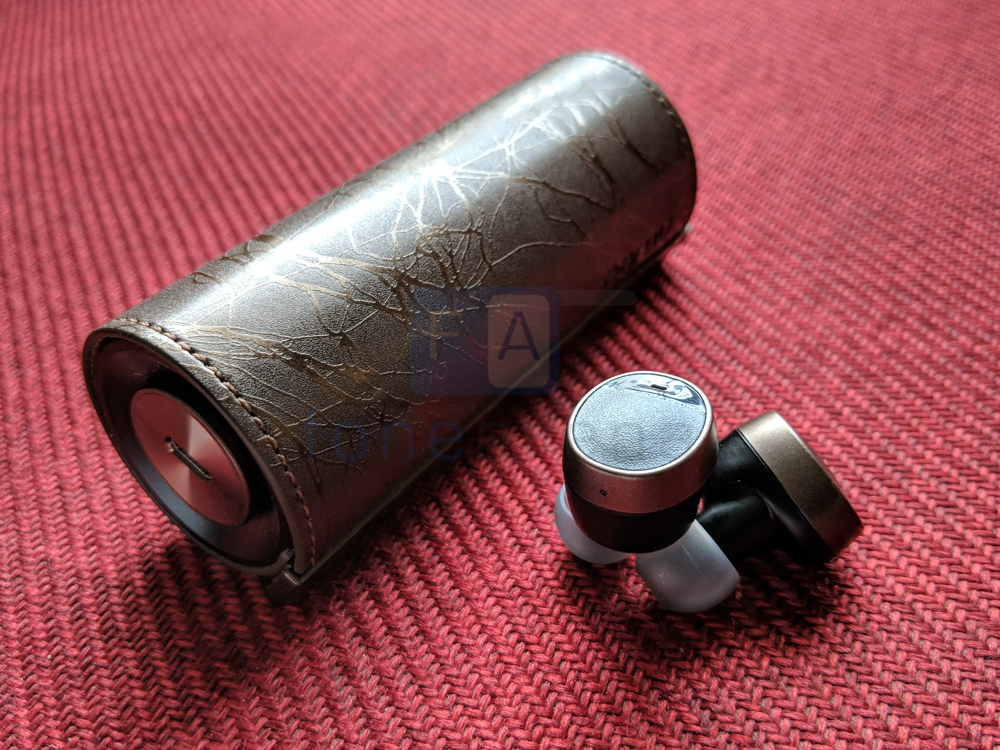 Talking about the earphones, these are absolutely tiny and automatically pair when taken out of the case. Other than a capacitive surface that controls basic functions, there are no buttons here. The lack of physical or gesture based controls is a definite disappointment since you’ll be popping out your phone every single time you need to change something. 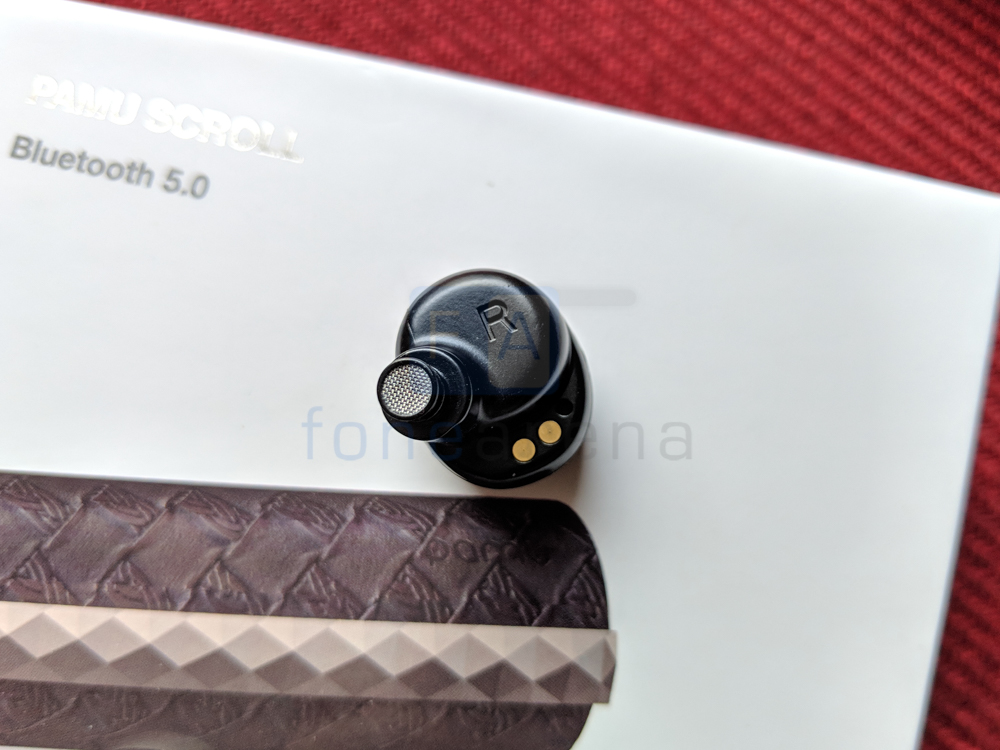 We found the fit to be absolutely fantastic on the Pamu Scroll. The stalk was perfectly sized to fit into the ear canal without sticking out, and we could comfortably take the headset out for a run without worrying about it falling out. Ear tips in a number of sizes are included in the package though an option for tips that give added support from the concha would be great.

One of the selling points of the Pamu Scroll is its support for Bluetooth 5.0. Since codec support tops off at SBC, Bluetooth 5.0 makes little difference to sound quality. We did however notice a much more reliable and stable connection. Take the Scroll out of the case and it auto connects to the last paired device within seconds.

Talking about audio quality, we were pleasantly surprised by how nice the Pamu Scroll sounds. Before we dive any deeper, lets put it out there. The Scroll isn’t an audiophile headset and has clearly been tuned for a generally appealing V-shaped sound signature.

We listened to a wide range of music on the Scroll. From Lo-Fi Trip Hop to an even a bit of Metal. The warmth of bass elevation makes the listening experience pleasurable for long hours.

Listening to new Behemoth album, the low resolution muddied up the instrumentation but Nergals throaty grunts still shone through. We switched over to some hip hop and the bass was satisfyingly deep without being boomy.

Pamu claims to deliver 3.5 hours of battery life from the Scroll with another 2 charges in the case. Realistically, we got about 3 hours of use out of these depending on the volume level. Not quite the best but we can live with it. 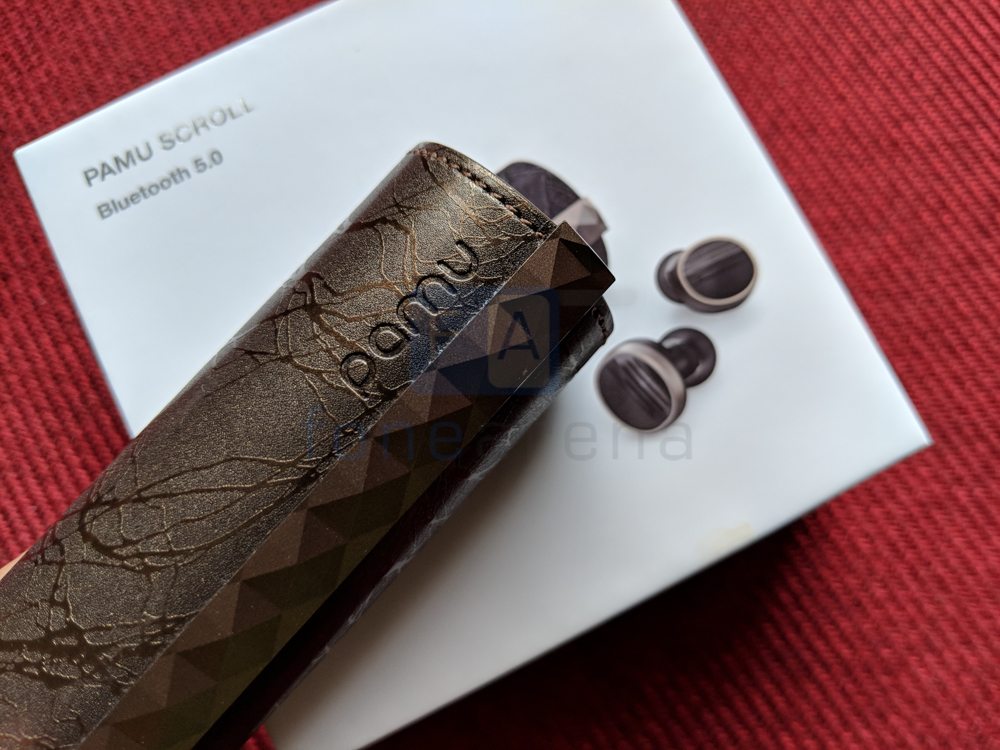 Look, The Pamu Scroll is not for you if you wish to do any sort of critical listening. The Scroll is an immensely enjoyable earphone for casual listening while out and about or on your daily commute. The tiny size and compact case means you can slide it into your pocket on your way out without having to think twice. Priced just under Rs. 3,000, these are a fantastic deal for anyone wishing to try out truly wireless headphones or simply, a good Bluetooth headset that doesn’t cost too much. Check them out view the Indiegogo link.