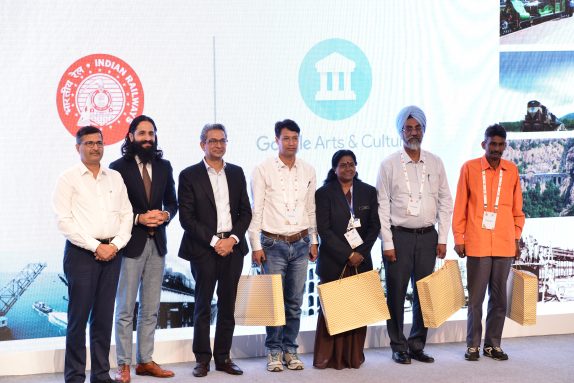 Ministry of Indian Railways today announced its partnership with Google to bring the history of Indian railways on Google Arts & Culture. This move comes as a mark to celebrate the historic journey of Indian railways, highlighting the deep-rooted connection of railways with the country. The new online project “The Railways — Lifeline of a Nation”  has also been unveiled at the event.

Indian Railways cover over 151,000 kilometers of track, 7,000 stations, 1.3 million employees and 160 years of history. Since its first rail journey back in 1853, Indian Railways has come a long way and has developed into a network of thousands of railway lines connecting remote parts of the country. It is an essential infrastructure in the country.

The Google Arts & Culture’s new online collection is a hub for digital story-telling and will make India’s rich rail heritage digitally accessible to people in India and around the world. From the Fairy Queen which is among the oldest functioning steam engines in the world and The Royal Saloons of Mysore and Baroda, to the Palace on Wheels, and the first locomotive built in India; the 100+ online exhibitions, 150+ videos and 3500+ images, will offer an in-depth exploration of the sights, and significance of India’s railways.

The project will offer insights regarding the lesser known stories and heroic efforts of people like track men, station charges and workshop engineers, to celebrate their contribution to India’s railways. Indian Railways and Google will bring the exhibits to 22 stations in India, including New Delhi, Bengaluru, Coimbatore, Guwahati, Howrah, Secunderabad, and Varanasi.

Google is committed to preserving and breathing new life into artistic and cultural treasures around the world. The extraordinary heritage, history and culture of Indian Railways is truly fascinating, and a treat for both the young and the old. This initiative is all about the iconic moments, the heritage, and the making of Indian Railways, which today is the backbone of the country in many ways. It’s an honor to partner with the Ministry of Railways and more institutions to bring India and the world closer to the rich legacy of Indian railways.

Since its inception more than 150 years ago, Indian Railways has been an integral part of every Indian traveler, and unified millions with unique cultural experiences. The massive reach, breathtaking sights, its people and their stories, make Indian railways truly unique and magical. Through our partnership with Google, we aim to celebrate this historic journey, highlight the transformation, and preserve the grandeur of Indian Railways for the future generation to rejoice.”