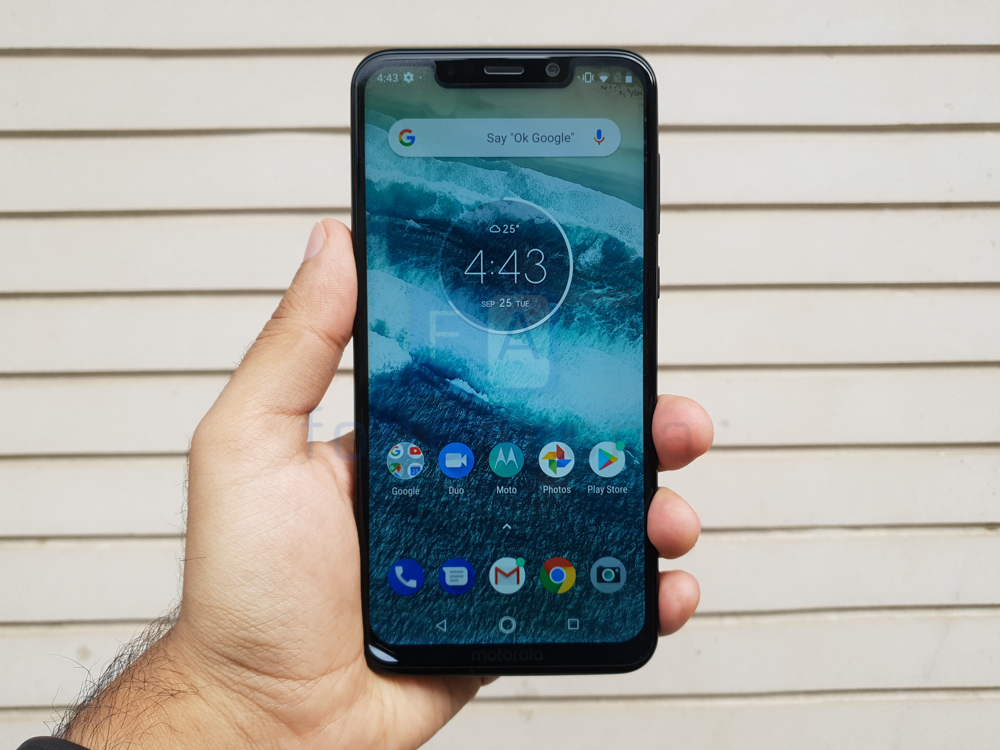 When we sat down with Motorola to talk about the all new Motorola One Power, one thing was clear. The phone had been designed ground up to tick the check marks for all the key specs that online buyers demand. Android One, guaranteed updates, a huge battery and even a notch! Apparently, these are the key metrics that online buyers look at when considering a new smartphone. So is the Motorola One Power the ultimate mid-range smartphone? Let’s find out in our review.

The design of the Motorola One Power is to the point and utilitarian. This is probably not the device to get if you want to flaunt your smartphone’s looks. That’s not to say that the design is bad. The Motorola One Power feels solidly built to the point where you know it’ll survive day to day abuse and can easily handle a fall or two. It is also the company’s first smartphone in India to sport a notch. 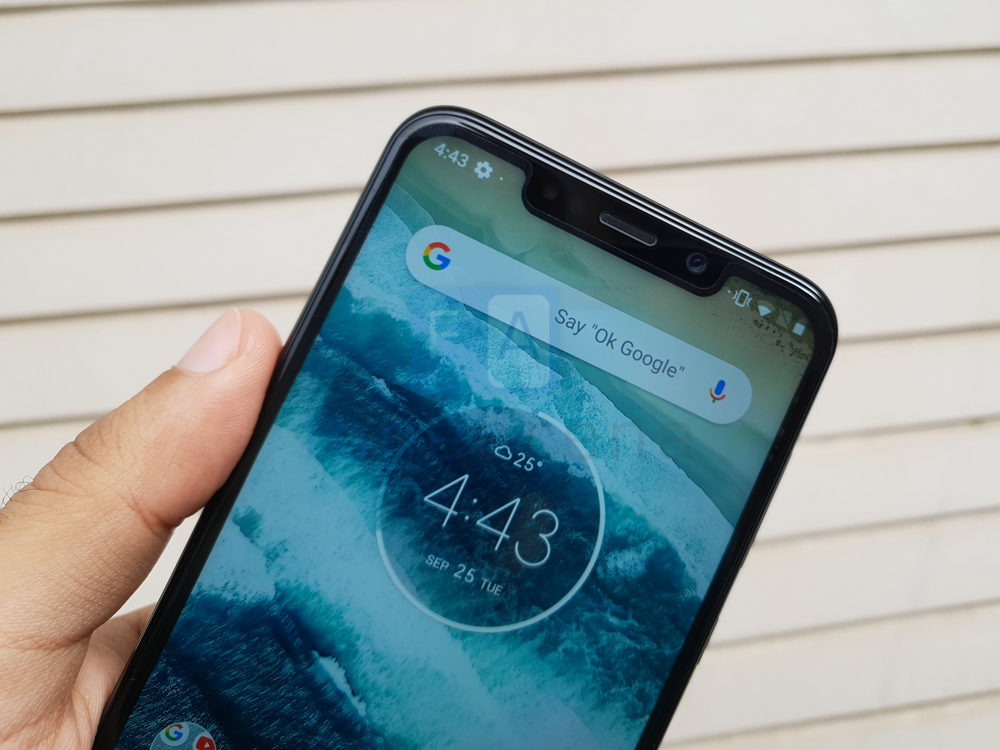 A large 6.2 inch display sits up front and gives the phone a passing resemblance to the latest crop of iPhones. Bezels aren’t all that bad for a mid range phone but Motorola could’ve done a better job at reducing the size of the lower chin. Additionally, the Motorola branding seems like a bit of overkill considering a Moto logo is already present at the rear.

The right side of the phone has both the volume rocker and power button. Tactile feedback is decent but not as tight as what we’ve come to experience on Nokia’s devices. The volume rocker, in particular, could do with some more segmentation. The left side meanwhile has dedicated dual SIM card slots as well as a microSD card slot. Along the bottom edge is the USB Type C  port as well as a speaker grille. Talking about the speaker, the Motorola One Power goes pretty loud. There’s little to no bass but the sound doesn’t really crackle even at high volumes. 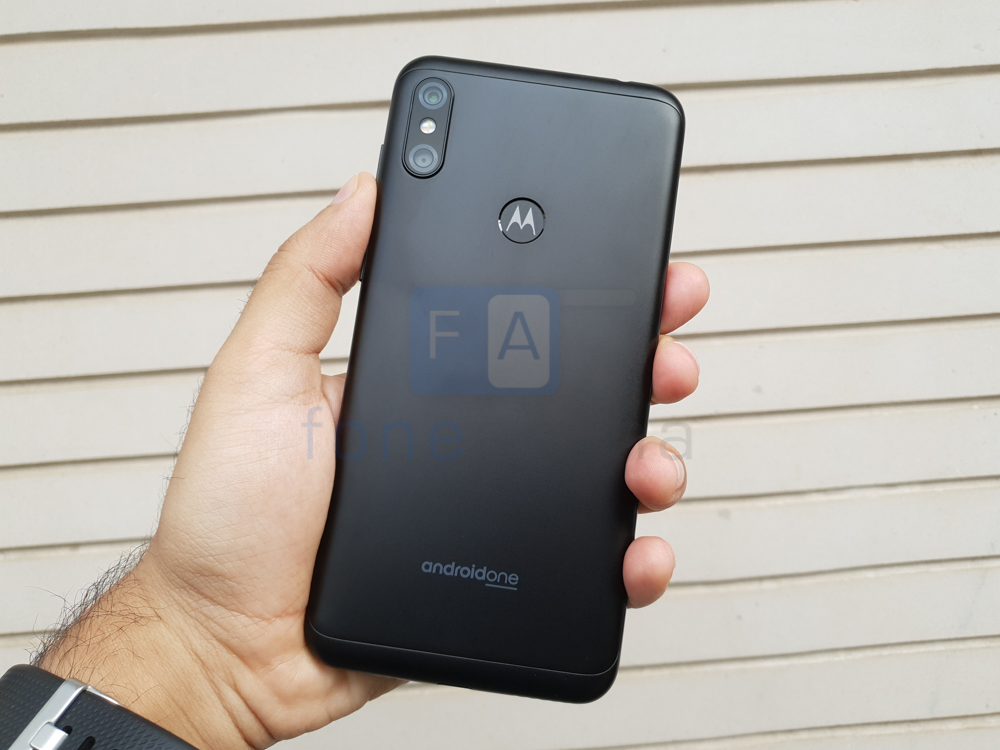 The back of the phone is Redmi-esque with a central aluminum shell rounded off by plastic end caps that aid antenna performance. The camera shell protrudes out a bit as you’d have noticed and integrates dual cameras with an LED flash in the middle. In a bit of a throwback, the Moto logo is silkscreened in the middle of the fingerprint scanner. It almost reminds you of the classic Motorola dimple, but we digress. The fingerprint scanner is as fast as the competition and gives no reason for concern.

Holding up the phone, you will notice the weight. At 205 grams, the Motorola One Power is easily one of the heaviest devices around but that’s the price you pay for the enormous 5000 mAh battery. The phone itself isn’t really slippery and the build quality is pretty good albeit practical. Moto bundles in a transparent case in the box too so that you can get started off as soon as you get your phone.

The Motorola One Power runs a near-stock build of Android 8.1 Oreo with limited additions in the form of Moto Display and Actions. Much loved gestures like chop to light the flashlight and double twist to launch the camera app also find their way here. Moto Display, in particular, was one of our favorite features as it allows the screen to light up and display on-screen notifications. The ability to glance at notifications without having to unlock the phone is something you really appreciate in day to day use.

We also got a chance to take a quick look at the beta version of Android Pie on the Motorola One Power and it seems to be coming along nicely. Motorola is committed to rolling out the latest OS update over the coming months. As it stands though, the Motorola One Power is a very nice mix of stock Android and just the right kind of additions you want on a phone.

Powering the show here is a Snapdragon 636 Octa core chipset that clubs 4 cores clocked at 1.6 Ghz with another 4 at 1.8Ghz. A classic workhorse chipset, the season 636 isn’t the newest or fastest processor around but it is known to perform well and is optimized for good battery life as well. Paired with 4GB of RAM, we had no issues with using the phone on a day to day basis.  The neat and clean interface is smooth and fast all the way through. Occasionally the phone would stutter or take a second longer than expected to start an app but that was definitely not the norm. For what its worth, the internals of the Motorola One Power are very similar to competitors like the Redmi Note 5 Pro so you can have a good idea of the baseline performance you can expect.

Display
As we mentioned earlier, the Motorola One Power too has jumped on the notch equipped display bandwagon. In our conversation with Motorola, the company insisted that a notch is a feature that is very much in demand amongst consumers, something that we find a bit hard to believe. But, we digress, the 6.2 inch LTPS panel is quite good though we found colors to be ever so slightly muted. The screen resolution is Full HD+ and the aspect ratio is 19:9. That aspect ratio goes a long way in making the phone comfortable to hold despite the large screen size. 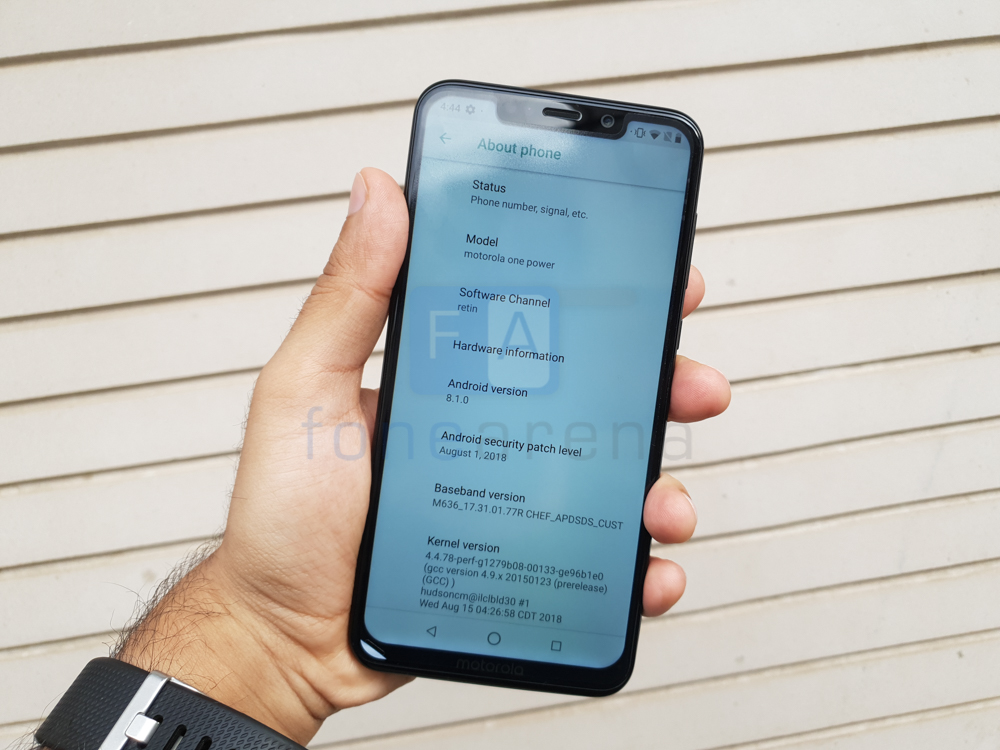 There are software options on board to switch color saturation between vivid and standard. We had no issues with brightness levels on the display and outdoor visibility was fine though the Redmi Note 5 Pro was just a bit more visible under a bright sun.

Practically all smartphones in the category are now equipped with dual rear camera modules. The Motorola One Power pairs a combination of a 16MP rear camera with a 5MP secondary camera for depth sensing. 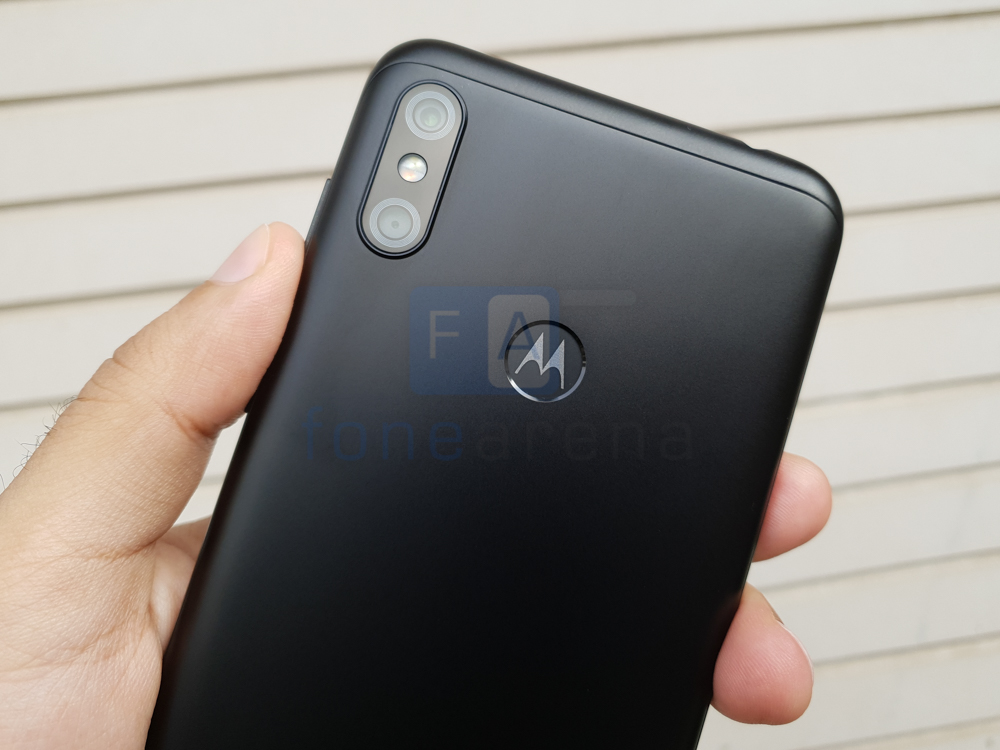 You’ll also find the requisite dual LED flash. On the front, the phone has a 12MP camera for capturing high resolution selfies. The default capture on the phone is set to 18.7:9 to capture images at the native aspect ratio of the screen.

Talking about the camera itself, there’s no two ways to put it. Motorola has really dropped the ball on the camera on the Motorola One Power. The camera consistently failed to produce quality images and proved to be particularly unreliable in less than ideal light. Even outdoors, the phone would often fail to get a sharp shot despite there being more than adequate light. Generally, there’s a certain softness to the images. Low light images are high on noise and more often than not, blurry. Metering is not too bad and the images are fairly color accurate. While the phone can shoot 4K video, it lacks any sort of stabilization.

Connectivity options on the phone include 4G VoLTE, WiFi 802.11 ac (2.4GHz + 5GHz), Bluetooth 5 and GPS + GLONASS. We like the fact that the phone has dedicated Dual SIM card slots in addition to the microSD card slot. Unfortunately you do not get 4G support on both the slots. In addition to other things, the phone has an FM radio built in as well as Dolby processing for multimedia content. A purely software solution, we observed that it gave a V shaped boost to audio playback and you’ll notice a bit of elevated bass. No, the Motorola One Power isn’t directed at audiophiles. In terms of storage, you get 64GB on board and about 52GB is available at first boot giving you ample storage space.

The best thing about the Motorola One Power is without a doubt the absolutely insane longevity on offer. With a 5000 mAh battery, well optimised hardware and a clean software build, the phone runs circles around most competing devices when it comes to battery life. Two days of actual usage is very easily attainable. Running a video loop test, the phone managed close to 17 hours of playback. With regular day to day use comprising of multiple email accounts, social accounts, media consumption including an hour or so of music streaming, half an hour of phone calls, the phone still rarely dipped below the 50%. Motorola has bundled in their 15W Turbo Charger with the phone allowing you to top off the phone relatively quickly. The tech is not as fast as Dash Charging and it will still take you close to two and a half hours to fully charge the phone. 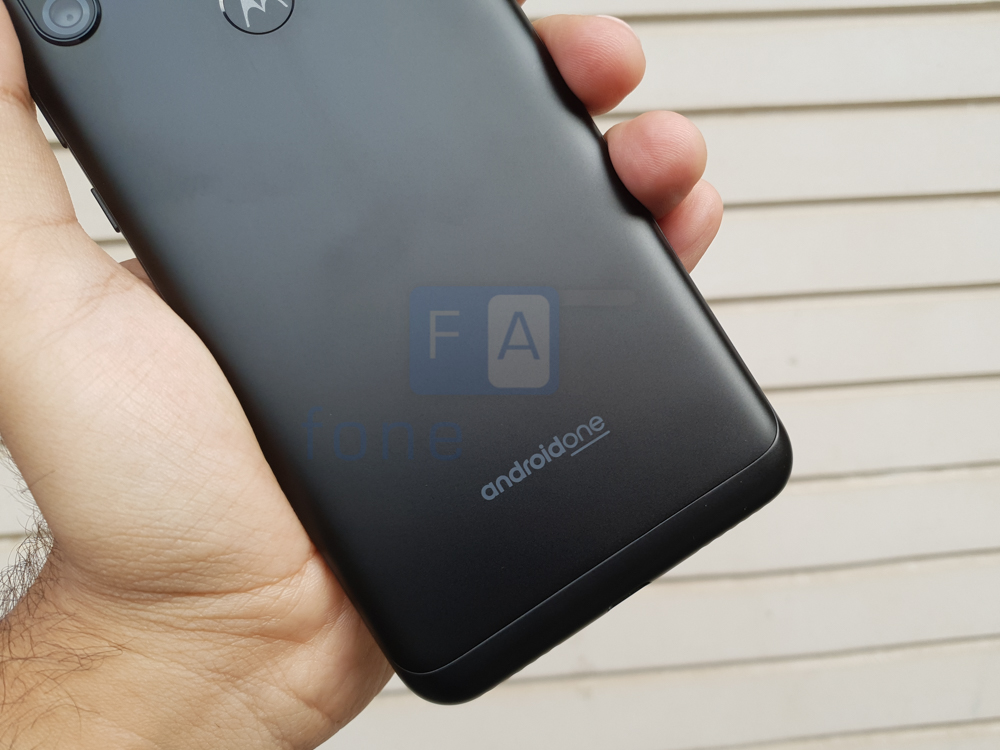 Priced at Rs. 15,999, the Motorola One Power establishes itself as the one to get if security updates and long battery life is what you desire. Being a part of the Android One program, you are guaranteed long-term security updates which is something that Xiaomi’s phones can’t really promise. Add to that the 5000 mAh battery and you’re looking at a very solid smartphone. Outside of the Redmi Note 5 Pro, the Nokia 6.1 Plus is another option that prospective buyers can look at. While the battery on the Nokia is significantly smaller, you get a nicer screen and a much prettier design. It goes on sale exclusively on Flipkart every week.