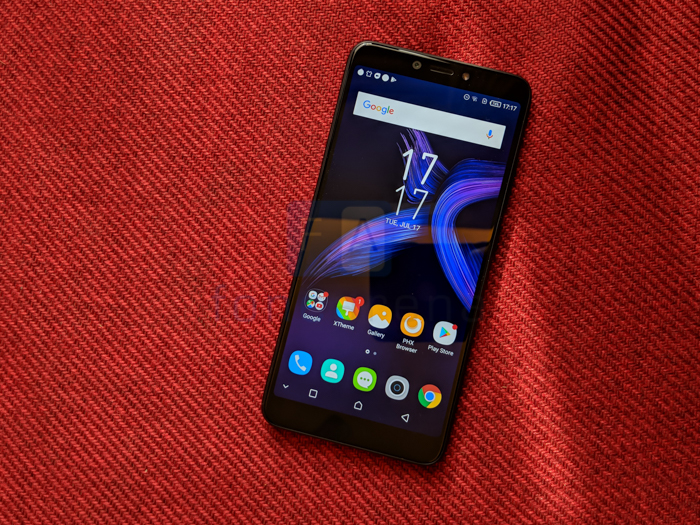 Over the last year, Infinix has managed to carve out a niche for itself. With well-balanced devices that offer large displays and good battery life, they’ve managed to stand out against the competition. The Infinix Hot 6 Pro is yet another smartphone that brings some key features like a large display and big battery at an affordable price point. Neither of these are new features in a very crowded market so let’s take a closer look at how the phone performs. 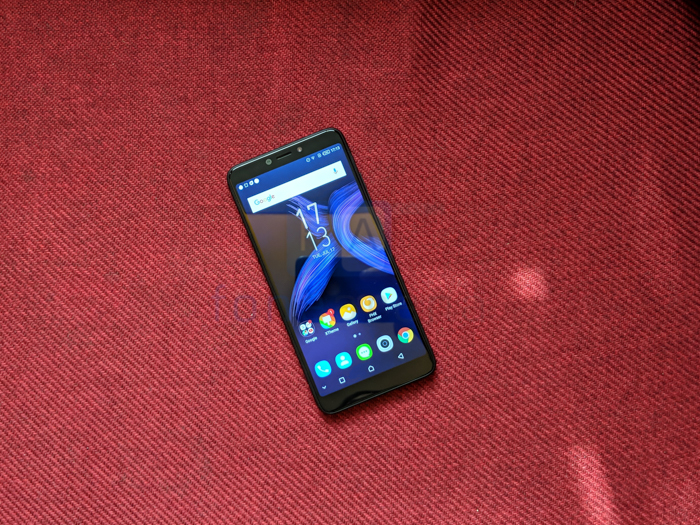 The Infinix Hot 6 Pro is a premium looking device with a design that emphasises the large screen front. The 5.99 inch 18:9 display is one of the largest you can get in the segment and Infinix has done a good job with minimising bezels. The screen has a gently 2.5D curve along the edges. The phone makes use of on-screen controls instead of capacitive keys while at the top is a 5MP front facing camera alongside an LED flash. 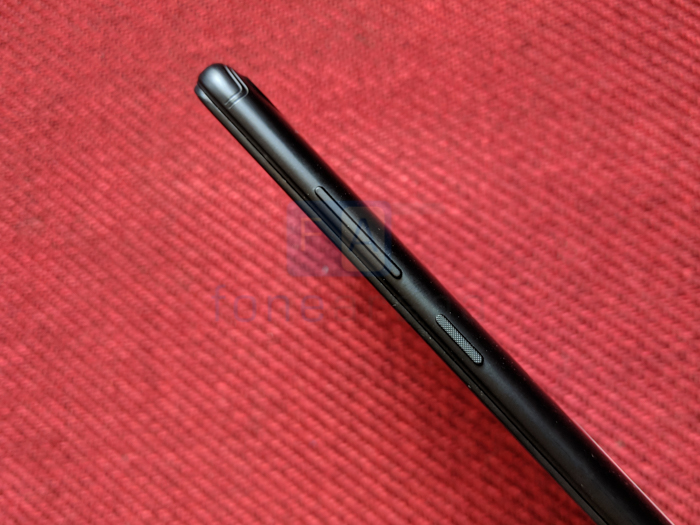 The sides of the Infinix Hot 6 Pro bulge out marginally but we feel that it helps improve ergonomics. The phone is very easy to grip. The right side has a volume control rocker as well as the power button. Both of these have fantastic tactile feedback, better than devices priced much higher even. You’ll have no issue with finding and pressing down on the keys even with the phone in your pocket. The left side has a dual SIM tray as well as dedicated microSD card slot. 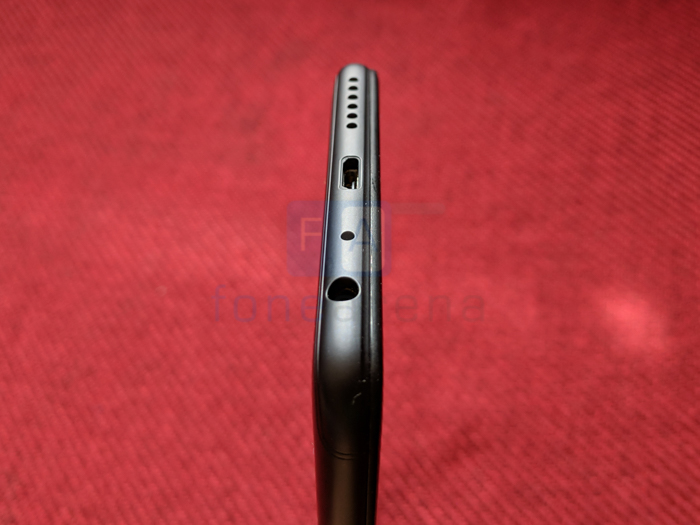 The bottom edge has a microUSB slot in addition to the 3.5mm audio jack. 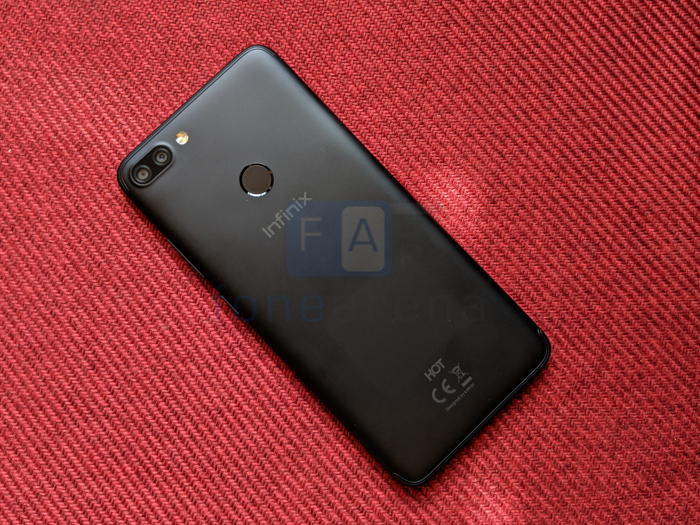 The back of the phone has a matte black finish. Branding is minimal which is nice if you prefer a nondescript looking device. In the centre is a fingerprint scanner which isn’t the fastest around but it get the job done. A the top left corner you’ll notice a horizontally placed dual camera array. This is very rare in this price band and we’ll talk more about it in the camera section of our review.

The Infinix Hot 6 Pro ships with Hummingbird XOS 3.2 which is a skinned custom ROM based on Android 8.0. The phone is running the May 2018 security patch.

The ROM isn’t quite stock like and the appearance is pretty heavily tweaked. The lock screen serves fresh wallpapers automatically and you’ll observe shortcuts placed along the bottom. Swiping up from the bottom drops you into the homescreen. As you’d expect, a fixed shortcut row sits at the bottom while you can place icons and widgets above it. Swiping up from the bottom takes you to the app drawer with the complete list of apps, segregated alphabetically.

There are quite a few extra apps preinstalled on the phone. From a forum app to a ‘Magic Movie’ app, most of them are pretty redundant but it is possible to uninstall most of these. As you would expect from a custom ROM, there are a bunch of feature available to users. These including a screen recording function, a one-handed use mode and scrolling screenshots. The phone does not have gesture based navigation and all you’ll get is stuff like double tap to wake.

The 1.4 Ghz Snapdragon 425 chipset powering the Infinix Hot 6 Pro is designed for entry-level devices and has been paired with 3GB of RAM over here. It isn’t really a scorcher but works well enough for the task at hand. Day to day use is satisfactory and slow downs are pretty limited. The company has done a good job tweaking the custom ROM for the hardware. It isn’t the best device to get for gaming though and if that is a focus, we’d probably look elsewhere. Heavy multitasking too can make the usage experience a bit jerky. We’ve put the phone through a number of benchmarks and you can see the results below. 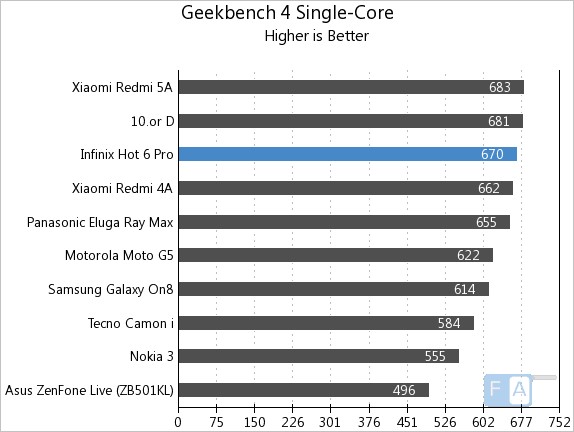 In the Geekbench 4 Single Core benchmark, the phone scores 670 points which is in the same ballpark as other competing devices. 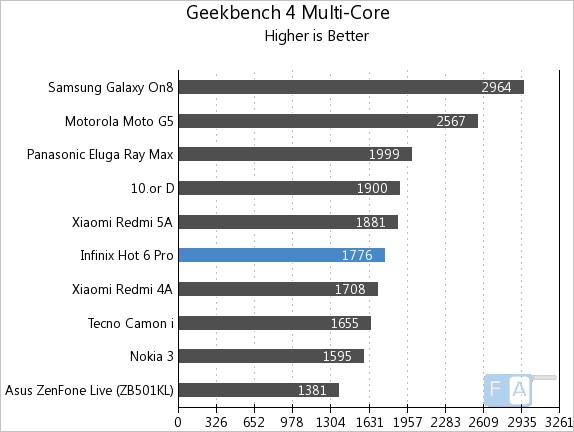 In the Geekbench 4 Multi Core benchmark, the Infinix Hot 6 Pro managed 1776 points placing it in the middle of the test bench. 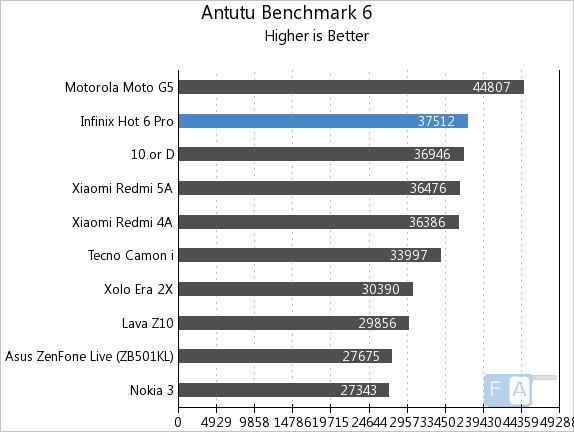 In the AnTuTu 6 Benchmark, the phone manages 37512 points which places it towards the top of our test bench. 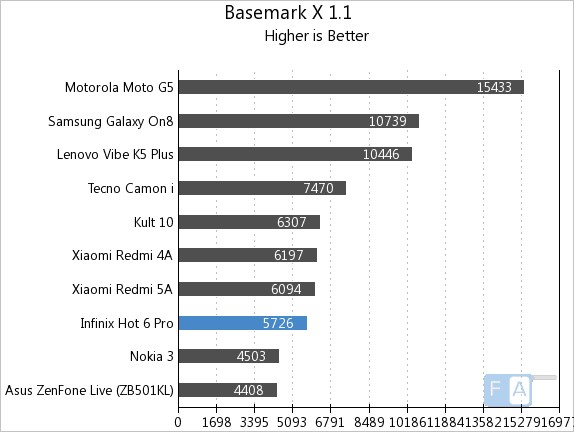 The 5.99 inch screen on the Infinix Hot 6 Pro is one of the biggest selling points here. The large display is perfect for watching video content or browsing the internet. We were pleasantly surprised by the screen on the phone. The screen displays great viewing angles and the colours are bright and saturated. 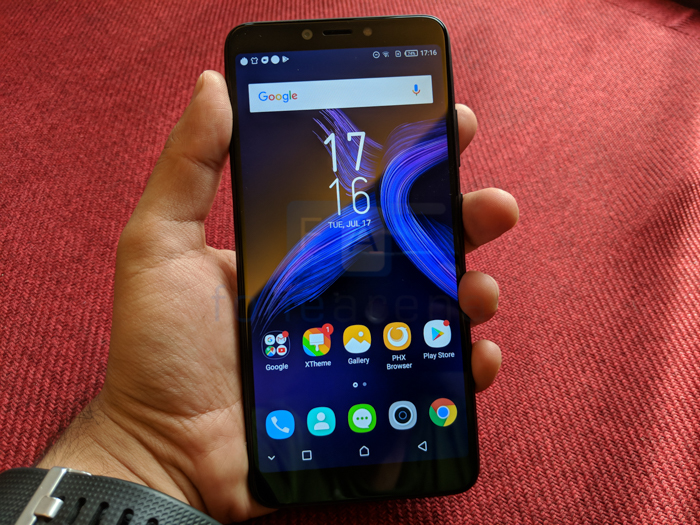 Now, this isn’t the most accurate screen and color saturation is pretty high but we doubt many will be complaining about that. HD videos aren’t the sharpest here because of the somewhat low resolution stretched out across the large 6 inch screen. Then again, you’d have to be pixel peeping to really complain about the display. It looks good, exhibits minimal color shift except at extreme angles and is visible outdoors too. That’s on par with and in fact better than many competitors.

When we first came to know that the camera on the Infinix Hot 6 Pro is a dual sensor array, we were quite intrigued. This is a very affordable device and a dual camera configuration is a relatively expensive component. Would it be anything more than a gimmick? Turns out, the result isn’t so black and white. The 13MP camera paired with a 2MP depth sensing unit takes reasonably decent shots. 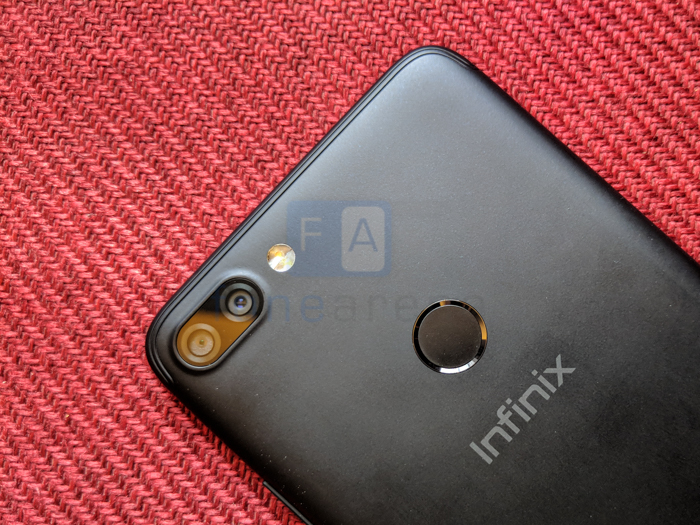 We had our expectations in check when we started testing out the camera on the Infinix Hot 6 Pro. This isn’t going to replace your SLR or even a higher end smartphone but for the price, it takes quite passable shots. 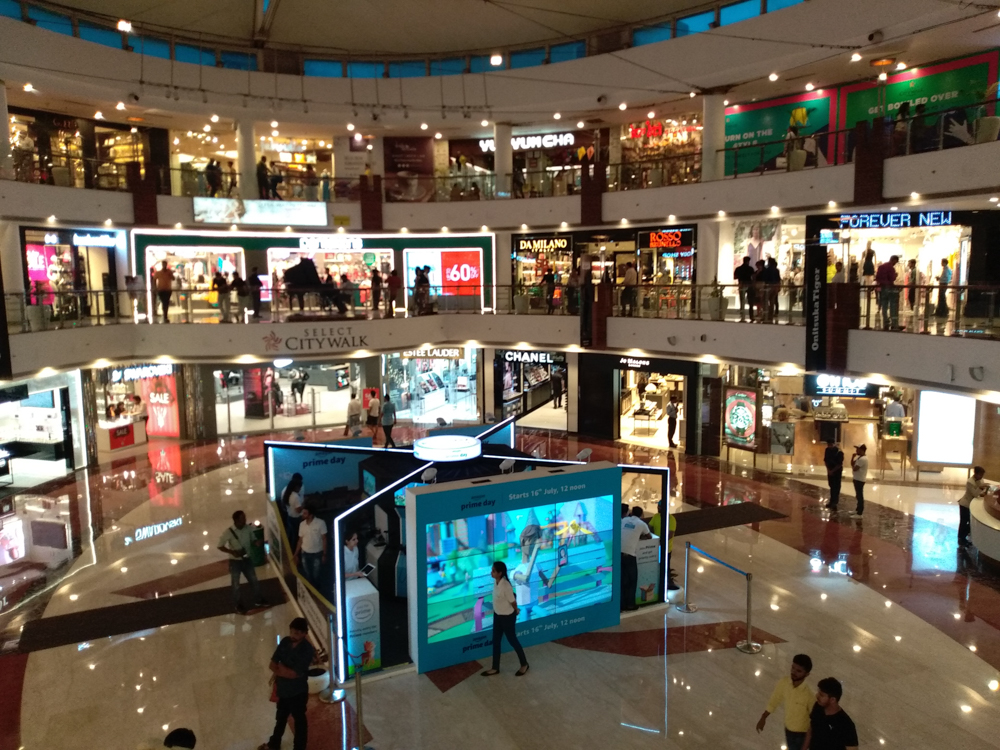 Focussing is quite fast and there’s quite a bit of detail in the images. The last few days have been very overcast in Delhi so the settings were already pretty challenging. We expect the camera to do a bit better in brighter conditions.

While the camera captures a decent amount of detail, there’s a bit too much noise and softness around edges. The camera also tends to blow out highlights as you’ll notice in the top left image. The portrait mode isn’t something I would recommend depending on. The same goes for low light shots where the camera struggled with getting a focus lock. All in all, the camera is the weakest link in what is otherwise a surprisingly balanced device.

The battery is rated at 4,000 mAh and in our testing we got a full day of use. This included testing out the phone with a number of email accounts synchronised and the usual social media apps being used all day where the phone gave us a screen on time of just under 5 hours. Not quite the best we’ve seen but not bad at all.

Priced at Rs. 7,999, the Infinix Hot 6 Pro targets a very specific user base. Delivering balanced performance and a large, vibrant screen, it ticks the checkboxes for multimedia heavy users. We even found the battery life to be perfectly adequate. What really sweetens the deal though is the price. In a hyper price conscious market, every rupee matters. The Infinix Hot 6 Pro is a value for money proposition and if you’re on a budget that’s exactly what matters.