Motorola’s Moto Z3 Play since the day it started appearing in the news has been a hot topic mostly because it is the successor to the Z2 Play, and the Moto Mod enhancements it is said to bring. The company already started sending out media invites for the launch which is scheduled to take place on June 6th in Brazil. However, thanks to leaks and rumors, there is pretty much very less to know about the phone at this moment.

In what can be seen as an unsurprising move, the Lenovo-owner Motorola Moto Z3 Play has yet again surfaced the interface along with a new 5G-enabling Moto Mod. While the leaked images of the Moto Z3 Play offers nothing that we don’t already know, it is the 5G Moto Mod that caught our attention. Back in 2016, Motorola had announced that it will bring a 5G Mod that is said to add 5G capabilities to the Z line. It looks the time has finally come. 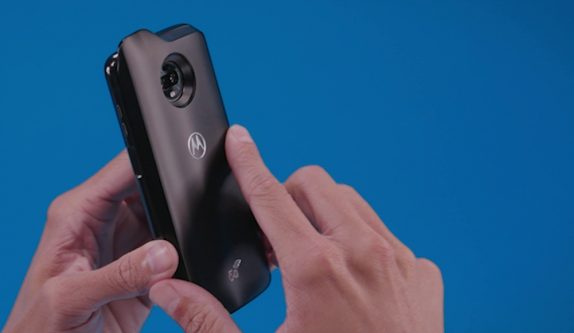 Like with most Moto Mods, the 5G Mod also stick to the back of the phone through the 16-pin connector, but unfortunately, that’s pretty everything we know about the Mod at this moment. Interestingly, if you closely notice the Moto Z3 Play image, there are no navigation buttons except for the  “pill” navigation bar seen on the Android P Developers Preview 2. This means that Motorola might be adding gestures of its own and also include the option to enable or disable on-screen buttons.

We should be knowing the pricing, availability and more details once the device goes official next week.