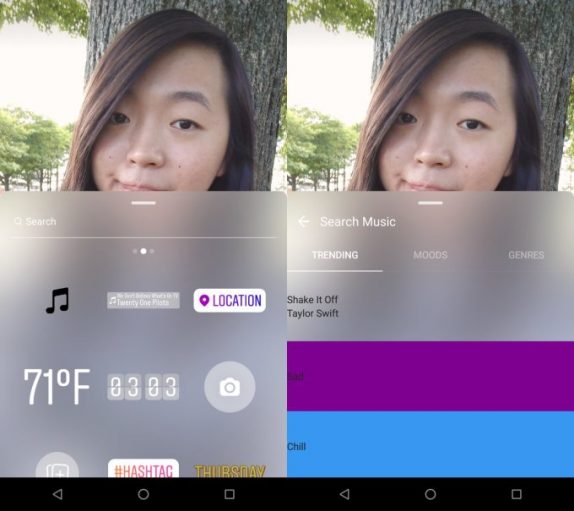 Thanks to the multiple licensing deals stuck by Facebook with the major record labels recently, these Listenable music stickers would make Instagram Stories even more addicted. This feature would definitely pose a threat to other similar services like Musically, and stumbling rival Snapchat that is also aiming to foray into music. It can also act as a powerful driver of music discovery.

The Instagram’s ‘Search Music’ feature is built-in and sits beside location and friend-mention sticker search options inside Instagram Stories. Users can search ‘music overlay stickers’ using Genres,” “Moods,” and “Trending. However, the company could change this functionality before it is rolled out. But with Instagram rolling out features like Focus, Video calling, Nametags which were earlier spotted testing weighs some credibility to the new testing results.

It is unclear how exactly this feature would work, but it looks like once user picked a song and added it as a music sticker to the Story, a clip of that song will play for followers to watch. It’s possible that the initial version of the stickers will only display the artist and title of the song similar to Facebook’s activity status updates, rather than actually adding it as a listenable soundtrack. Instagram like it partnered with Giphy for Gifs might partner with a specific music streaming company for the feature. We will know more once the company makes an announcement, stay tuned.