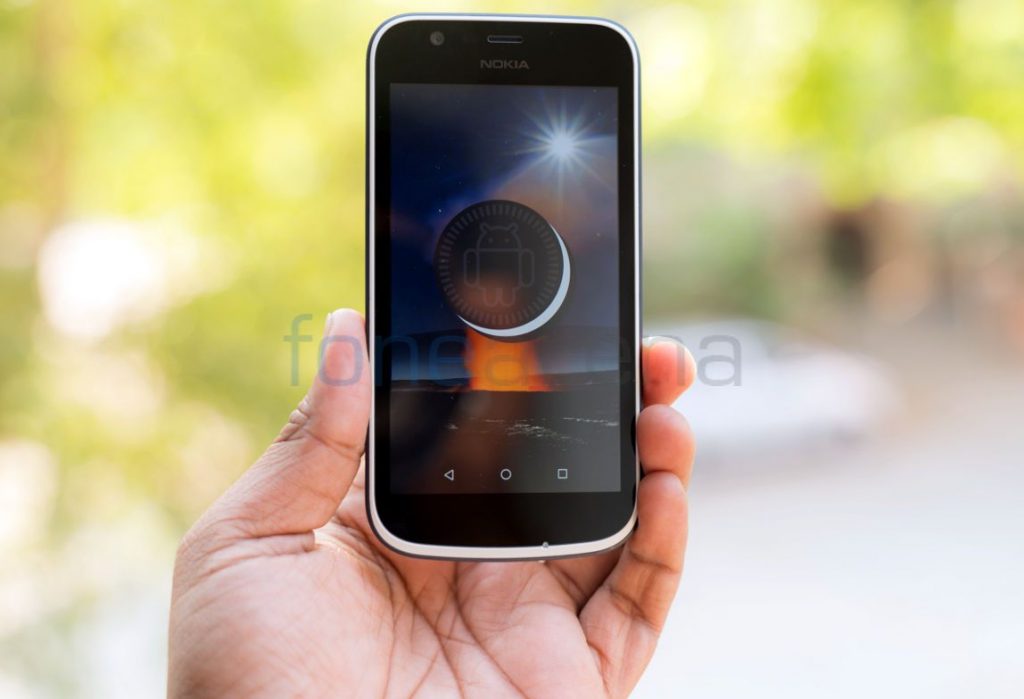 HMD Global introduced Nokia 1 smartphone at the MWC 2018 as a part of Android Oreo (Go edition) program. After the Lava Z50 launch, Nokia 1 became the second Android Oreo (Go Edition) smartphone to launch in India back in March. The Nokia 1 comes in Warm Red and Dark Blue colors, is priced at Rs. 5,499. Also, the Xpress On covers in packs of Azure and Grey or Yellow and Pink will be available separately. Let’s check out how good is the Nokia 1 for its price. 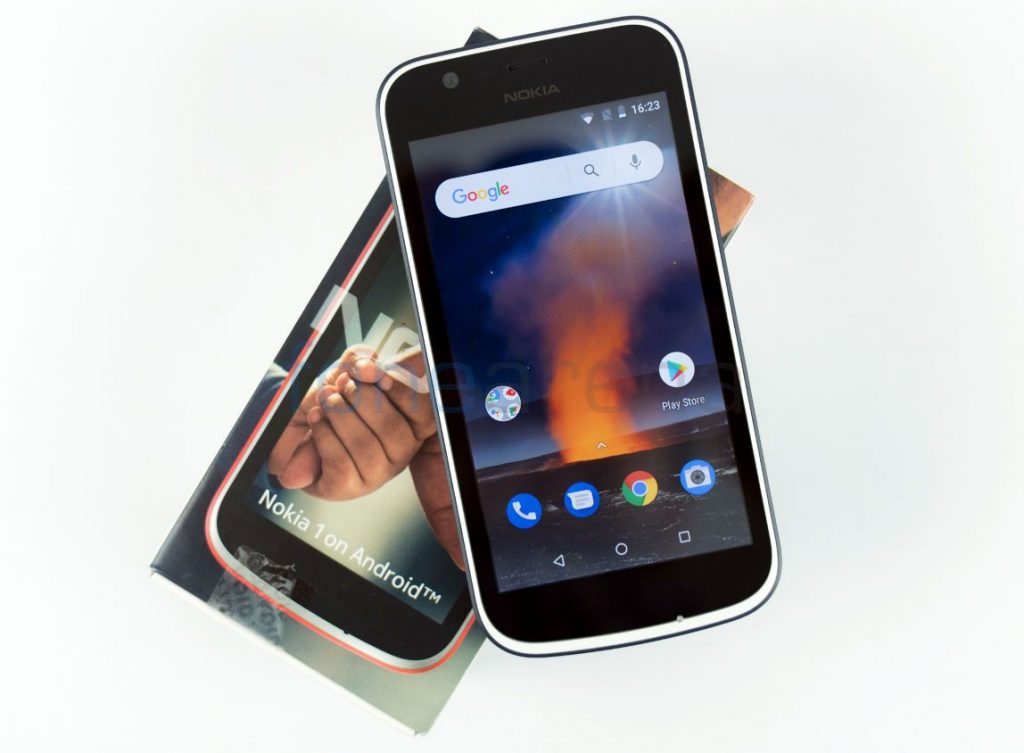 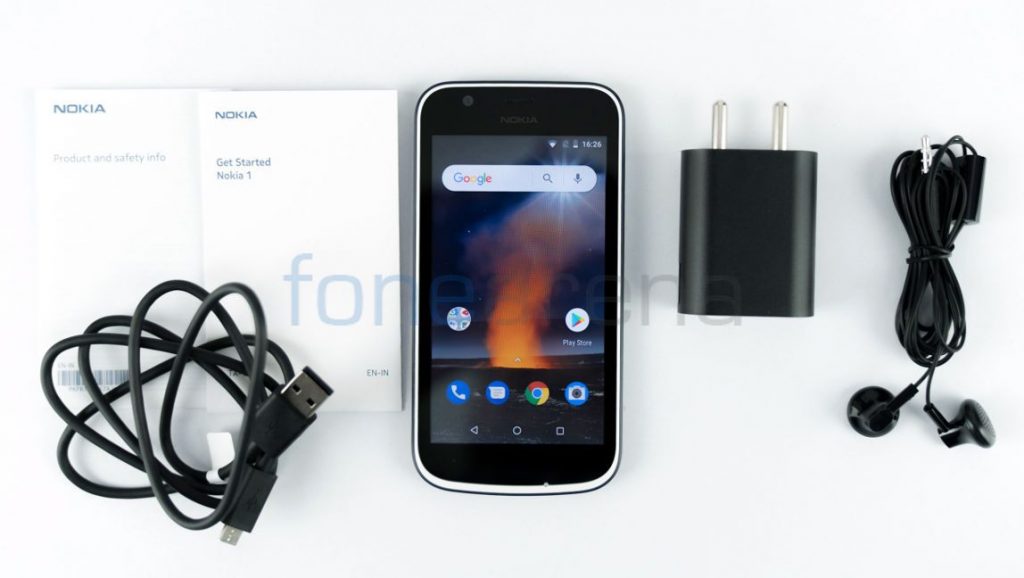 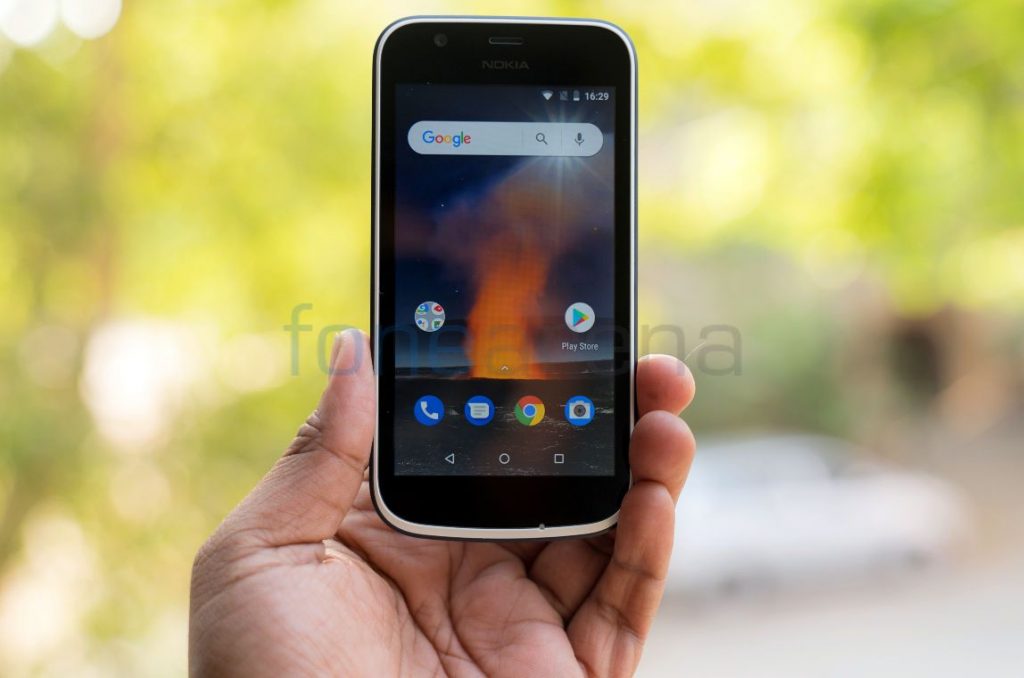 The Nokia 1 sports a 4.5-inch (854 x 480 pixels) FWVGA IPS display with a pixel density of 216ppi and 61.6% screen-to-body ratio. The display is average, not bright enough, color reproduction and viewing angles are decent. Having said that, the sunlight legibility is not the best. Considering its price point, Xiaomi Redmi 5A’s display is one step ahead in the above-considered factors. Having said that, it misses few features that we can get it on other smartphones at this price point including blue filter, double tap to wake up, etc. 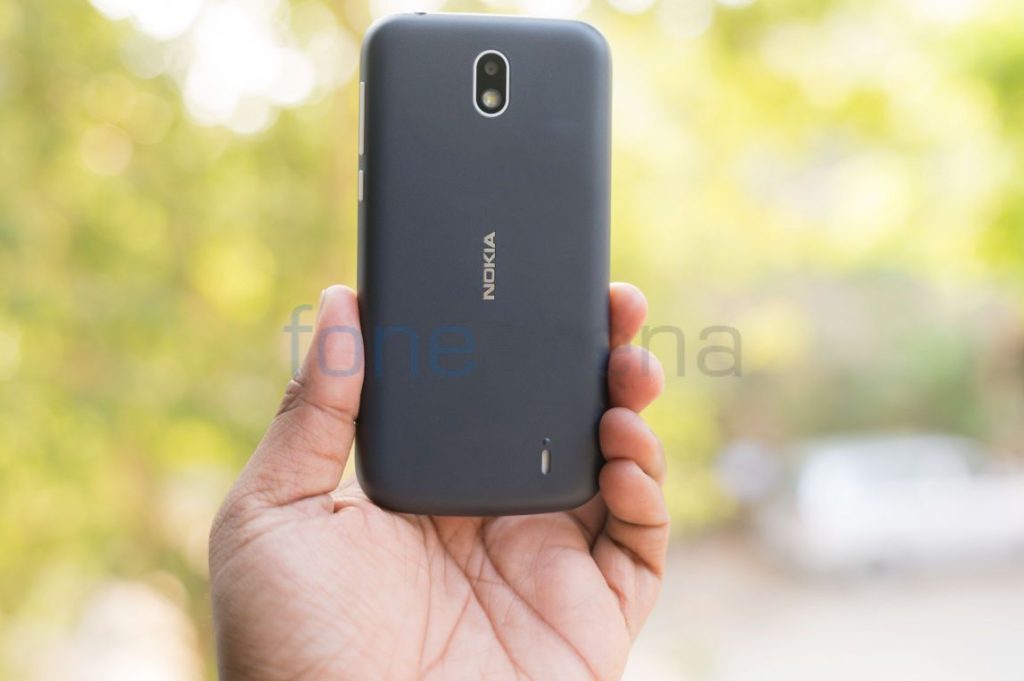 Talking about the design, the Nokia 1 comes in a polycarbonate body with a matte finish on the back that doesn’t attract fingerprints and also supports interchangeable Xpress On covers. The Nokia 1 makes use of bright colors and plastics to drive costs down. The device doesn’t have a premium look to it, but it is sleek, weightless and offers good grip to hold as well.

Moving on to the placement, the front side is dominated by the 4.5-inch display. Above the screen, we have 2 MP front-facing camera, earpiece and a Nokia branding under it. Below the screen, we have a big chin that has nothing to it. The company has opted for an On-screen navigation button, instead of a physical button. It has the usual set of proximity and ambient light sensors in addition to accelerometer, but it doesn’t have gyroscope and a magnetic sensor. Since it is an entry-level phone, you don’t get a fingerprint sensor.

We have the volume rocker and power button made out of plastic on the right side. The feedback of these buttons is good, to be honest. On top, we have a 3.5mm audio jack, and at the bottom, we have MicroUSB port. 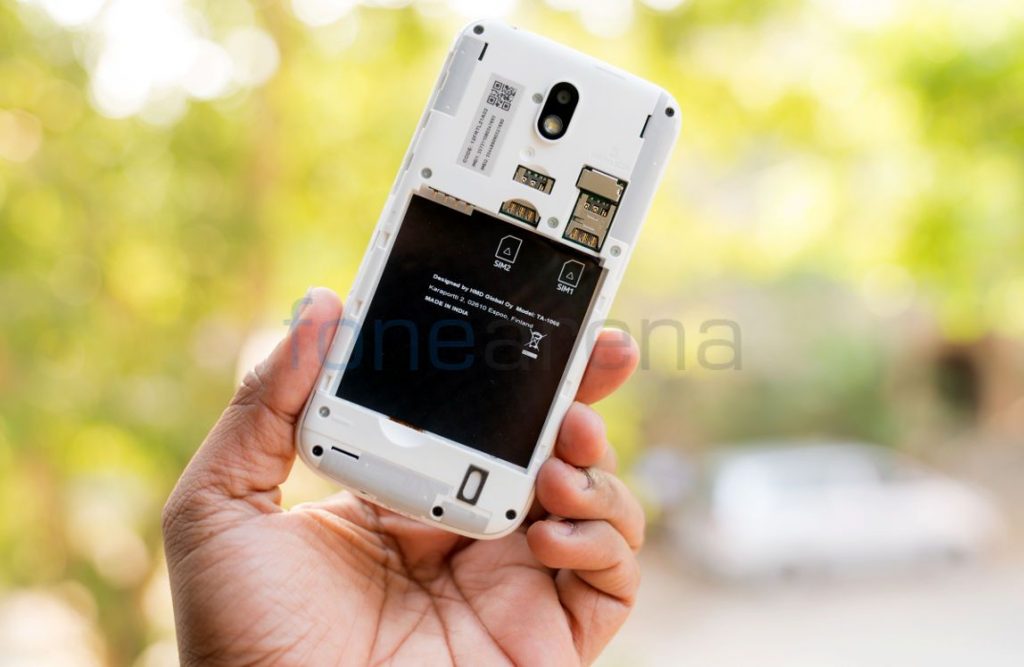 When it comes to SIM cards and MicroSD cards, we have to remove the back cover. Inside, we have a dedicated dual SIM slot and a MicroSD card slot as well. Moreover, we get removable battery too. 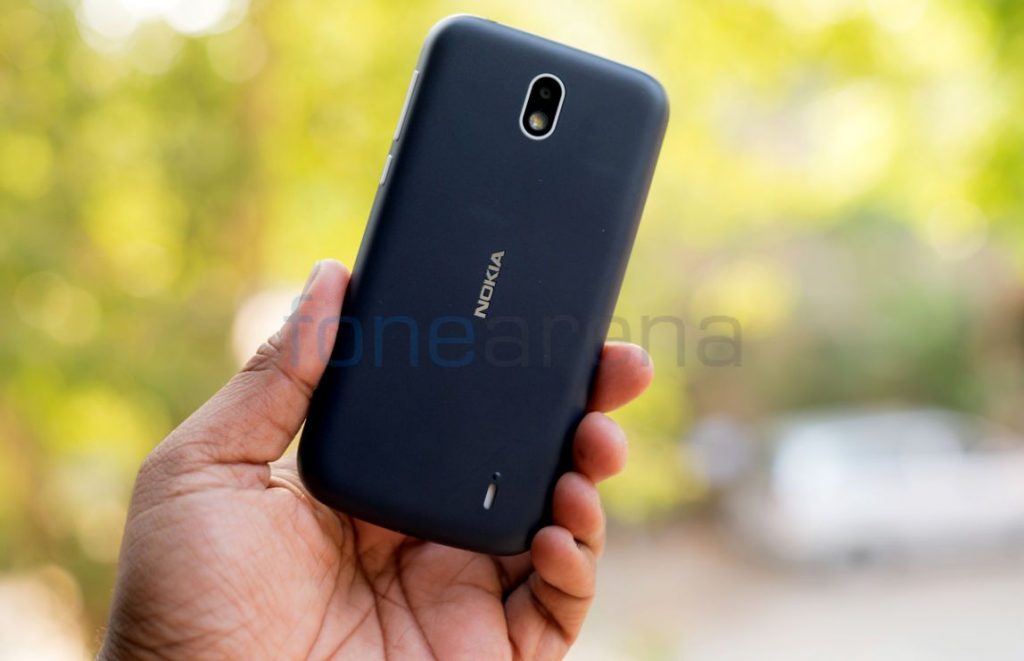 On the back we have a 5MP  camera and an LED Flash just below it. And in the middle, we have the ‘Nokia’ branding etched on the polycarbonate body. At the right bottom, we also have a speaker grille as well. 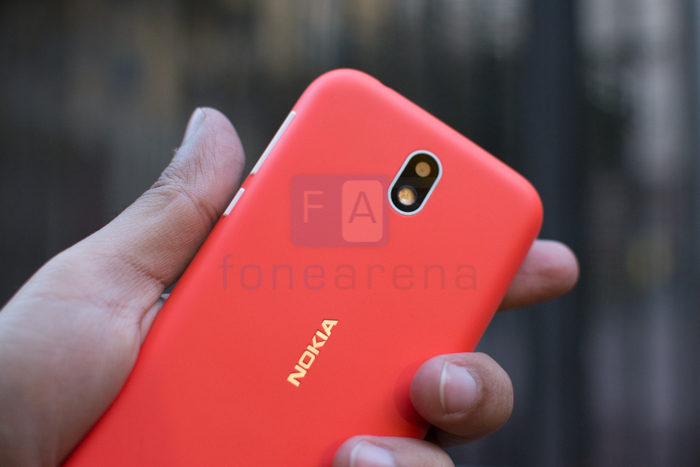 The Nokia 1 comes equipped with a 5 MP rear cameras with LED flash and 2 MP front-facing camera. The UI is simple and minimal with a toggle for changing camera, shutter button at the bottom. Video modes can be changed by swiping it to the right side. At the top, we have a toggle for the timer, HDR, and Flash.

Moving on, it has other features including Panorama, Beautify, and Manual mode. Inside settings, you get to control shutter control, Location tag, Resolution, etc. When it comes to real-world usage, the rear camera fetches us average at well-lit daylight conditions. When it comes to Macro, it struggles to focus but eventually achieves it a bit later when compared to other phones at this range. On the other hand, the low light shots are below average with noise. Images with flash were decent. Even though it has single LED flash, it sometimes it overpowers the subject for closeup shots. The front-facing camera is decent for selfies and video chats. 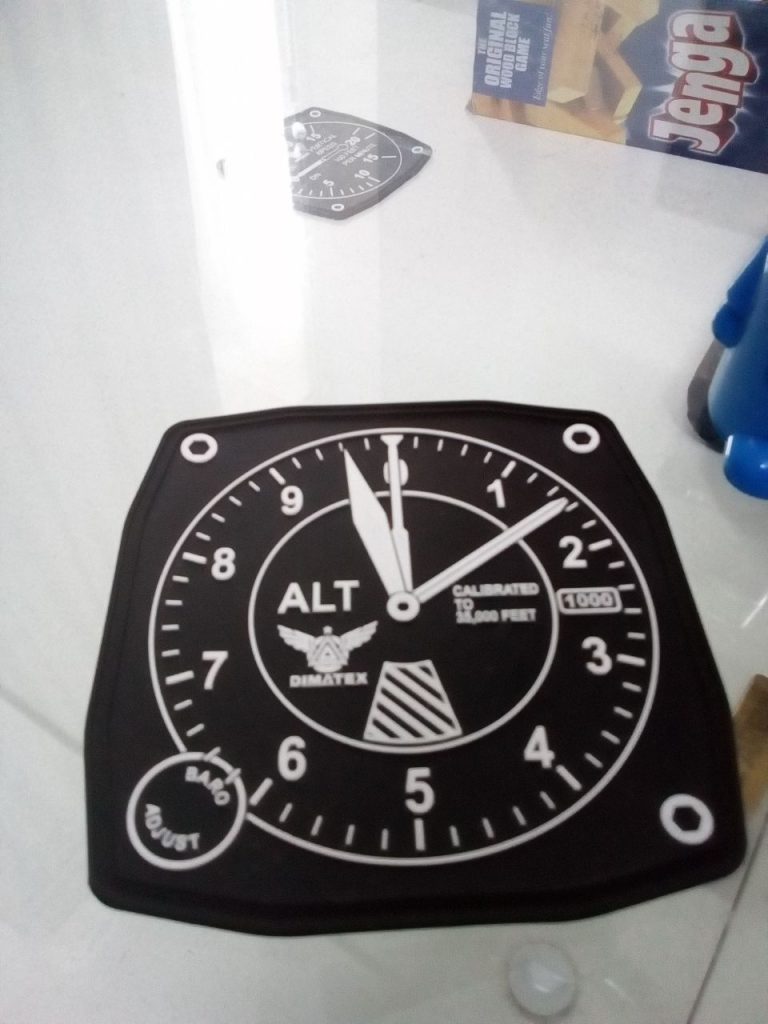 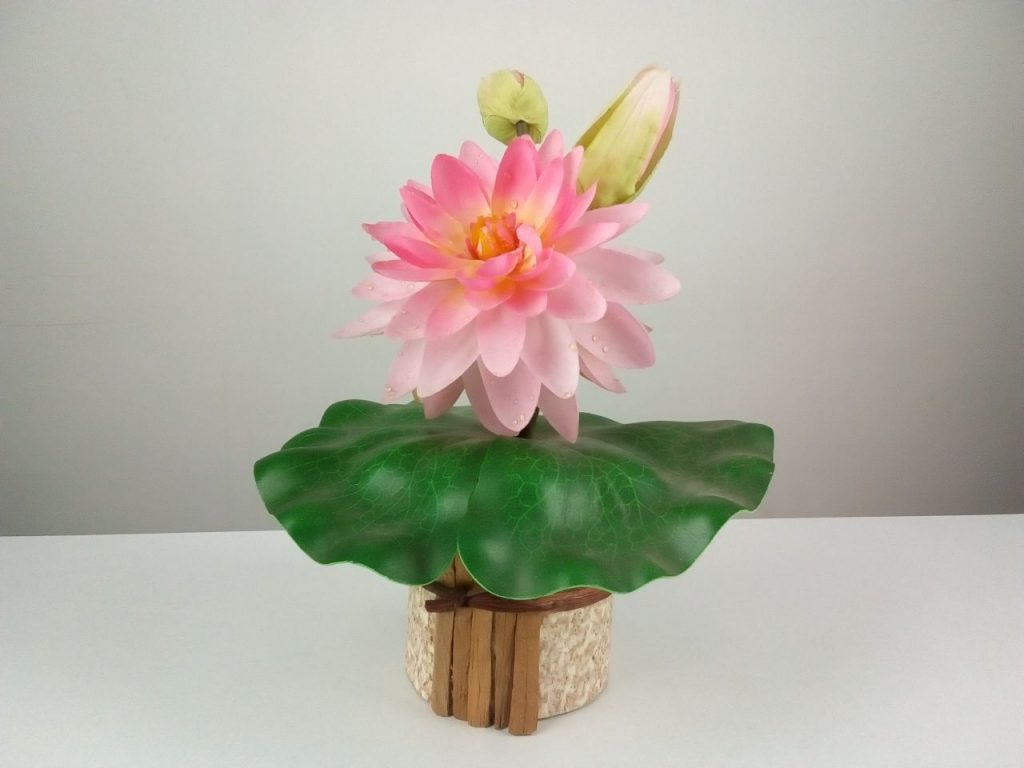 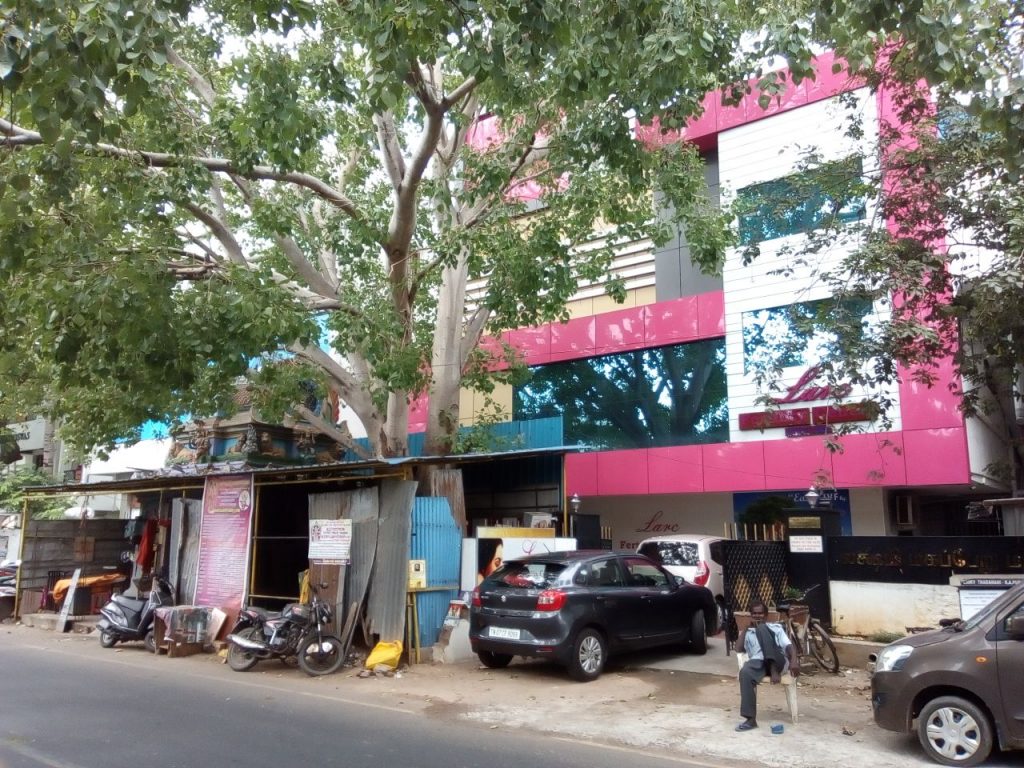 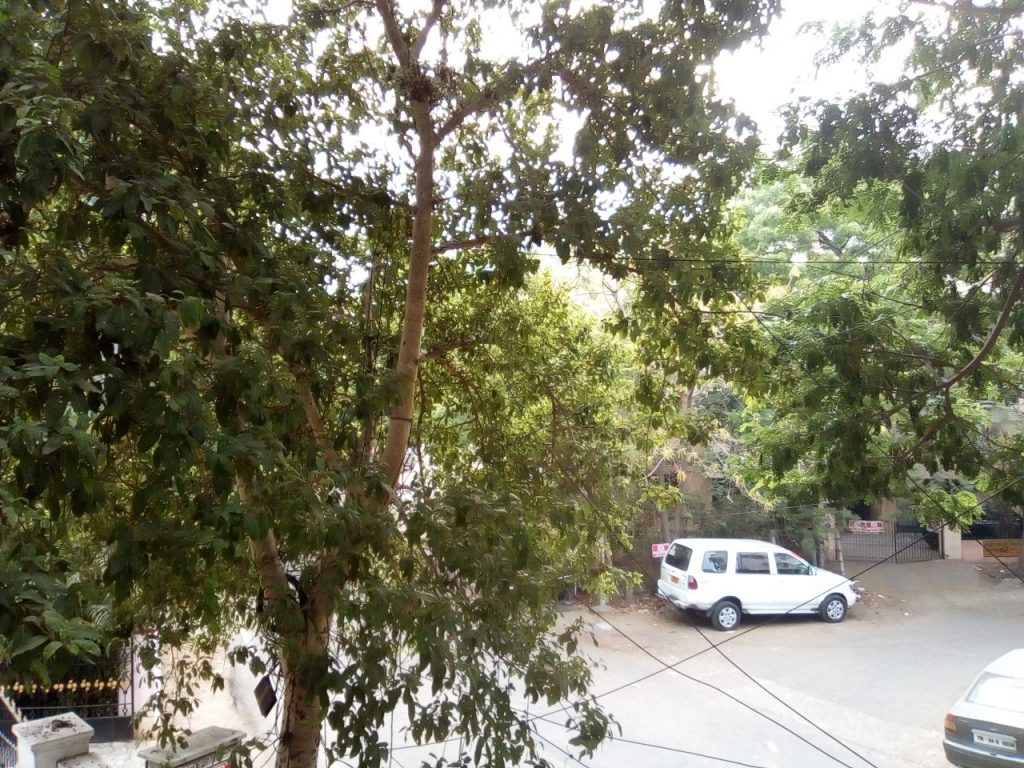 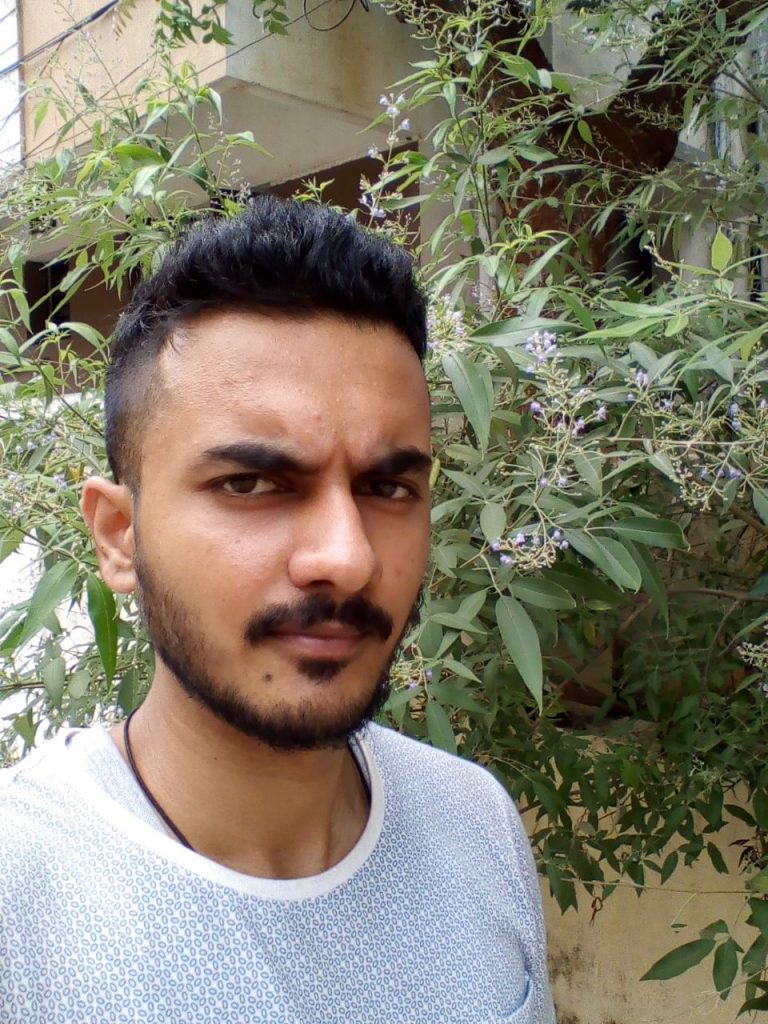 It can record videos at 720p resolution at 30fps. The video quality is average for a phone with a 5-megapixel camera.

The Nokia 1 is shipped with Android 8.1 (Oreo) Go Edition out of the box. Since it is an Android Oreo (Go Edition) phone, it has all the Go Edition apps that are slowing making their way. It looks more like a Stock UI without any bloatware or unnecessary flavors on top. It also has support for Treble support but it doesn’t have A/B partition for seamless updates. 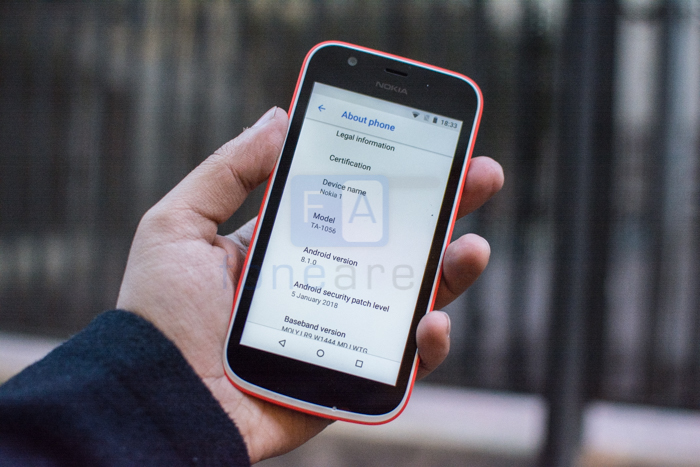 Talking about the Android Go edition, it has the same basic work as the original Android version, but with some sustainability and performance tweaks to ensure it works well with the devices that have the underpowered hardware. Having said that, Nokia 1 is optimized for basic use without any problems. The Nokia 1 comes pre-installed with just Google Utility apps and nothing else. With this device, users can also use the Google Assistant as well. 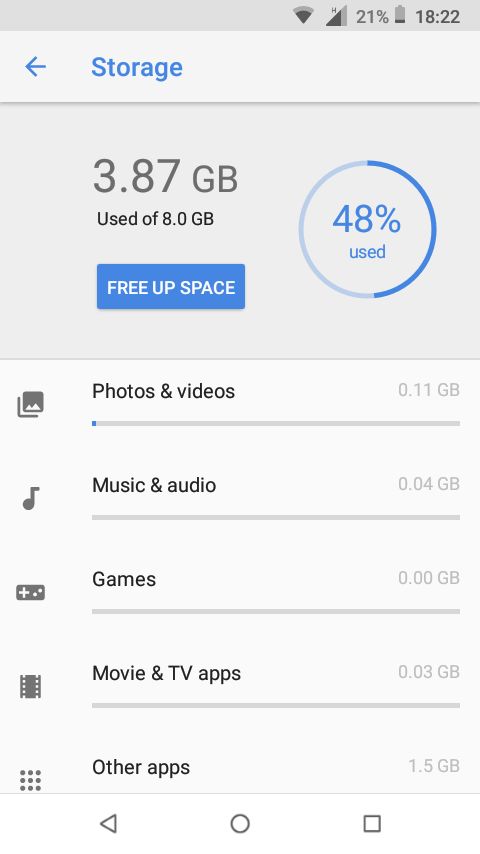 The Nokia 1 comes with 1GB RAM, 8GB internal storage, which can be expandable up to 128GB with microSD. Out of 8GB, we got around 4.3GB free. Out of 1GB RAM you get 929MB of usable RAM, out of which 370MB is free when the default apps are running in the background.

It supports connectivity options including 4G VoLTE for Reliance Jio, WiFi 802.11 b/g/n, Bluetooth 4.0 and GPS. It also has FM Radio as well. Both the SIMs support 4G but you can use 4G on only one SIM at a time and the other goes to 2G.

The Nokia 1 comes with stock dialer UI and Google keyboard. During calls, the earpiece volume is good and there is no call drop as well. Since this is a dual SIM phone, you get an option to select SIMs when calling or sending a text message. 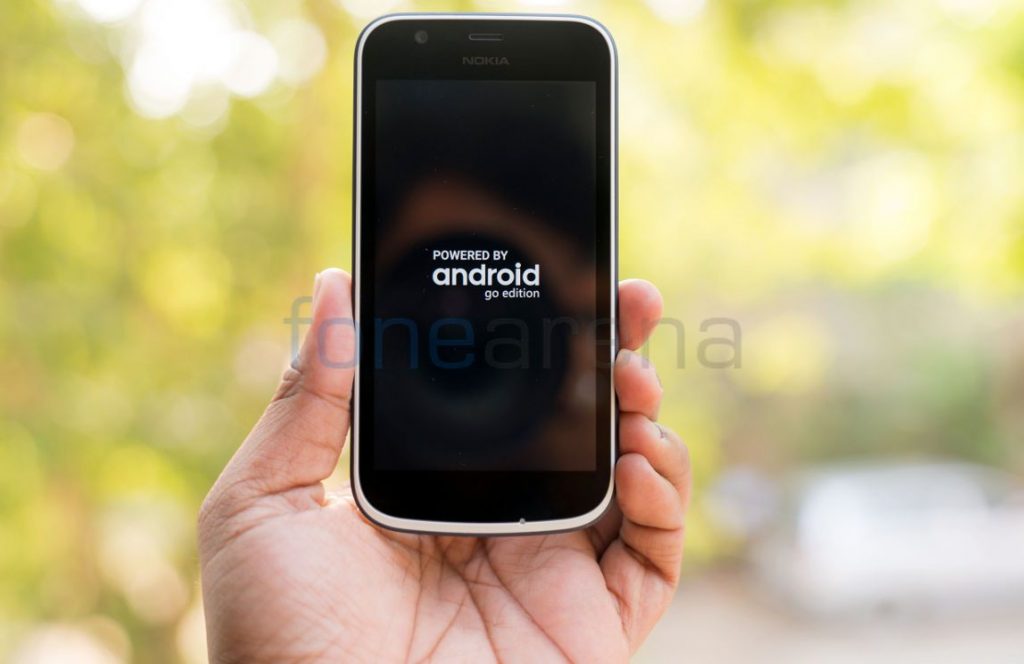 The Nokia 1 is powered by a Quad-core MediaTek MT6737M clocked at 1.1GHz with Mali-T720 GPU under the hood. When it comes to performance one should know that this smartphone is not meant for heavy gaming or ordinary gaming for that matter. Also, installing too much of apps leads to lag/hang, and multi-tasking between heavy apps (Facebook, WhatsApp, Twitter, Instagram and Amazon Prime Music) might annoy you.

On the good side, it proves to be good for light and casual usage. For those who just want to upgrade from their feature phone to a smartphone with no interest in installing too many apps, and using it just for calling purpose and few apps like WhatsApp, Facebook, Twitter etc., the Nokia 1 is a good companion. 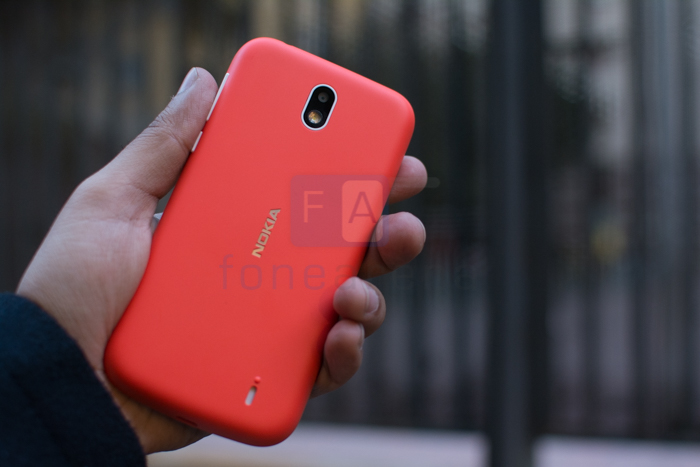 The Nokia 1 comes with a removable 2150mAh battery under the hood. For casual usage, the battery life is great and takes us throughout a day comfortably with 30% of the charge remaining. On the flip side, the device takes around good 3 hours to get charged from 0 to 100%, which at times is frustrating.

The Nokia 1 is a good smartphone for those who want an upgrade from a feature phone segment. At a price of Rs. 5,499, it has a pure Android experience, Nokia branding and that’s about it. With extra Rs. 500, you can get the Xiaomi Redmi 5A, that has some additional features as well as better camera and battery life.