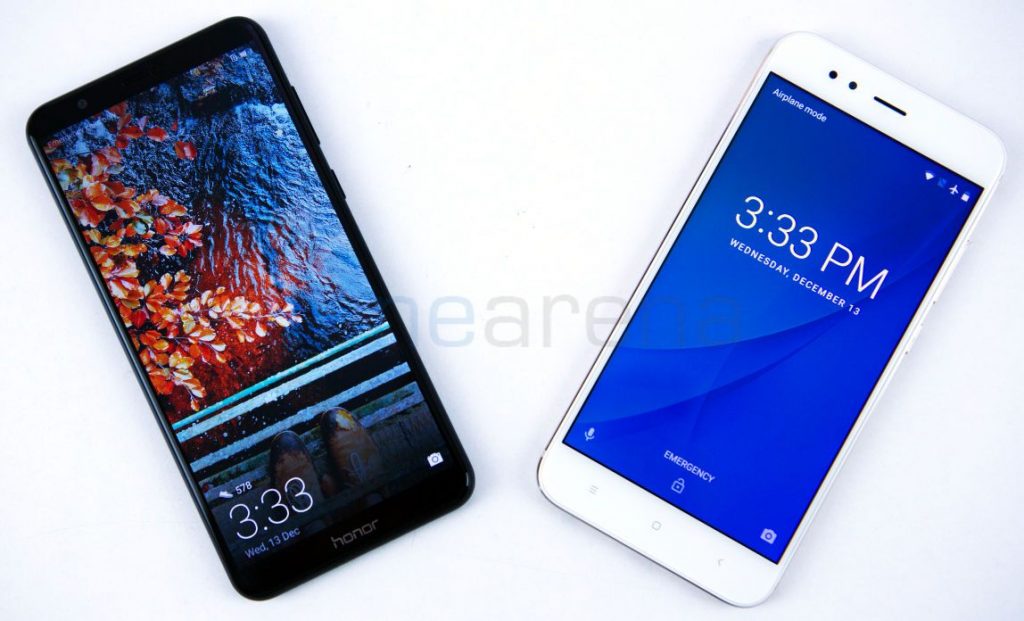 Quite lately, it is evident that the Chinese handset makers including Huawei, Xiaomi and others are making an impact in the Indian market. India being the mid-range market, these handset makers stuck the right chord by selling some phones with amazing specifications at a cheaper price, in turn, making it value-for -money (VFM). Recently, Huawei’s Honor brand launched the successor of 6X, which was launched earlier this year. Dubbed as Honor 7X, it comes with dual camera setup, 18:9 aspect ratio and an array of camera modes at a starting price of  Rs. 12,999.

In the same range, Xiaomi also launched the Mi A1 smartphone recently as a part of Google’s Android One Program in India for Rs. 14,999, which now costs Rs. 13,999. As both the smartphones come under the similar price bracket, we pitted both the smartphones against each other to find out which one excels. Let’s have a look. 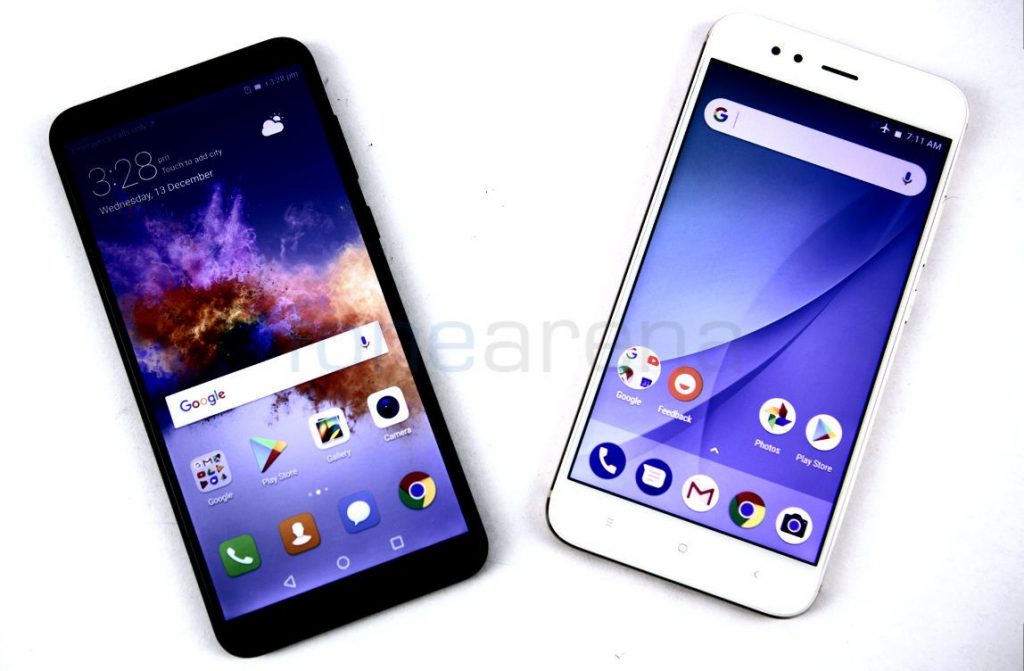 Talking about the design language, the Honor 7X comes with a metal unibody design with Black Matte Finish texture on the back. The phone is slim, sturdy and offers good grip as well. The 7X feels compact, even though it has a 5.93-inch display, thanks to high 77% screen-to-body ratio. Moreover, it has the originality to unlike other smartphones with rip-off design. It measures 156.5 x 75.3 x 7.6mm and weighs 165 grams. 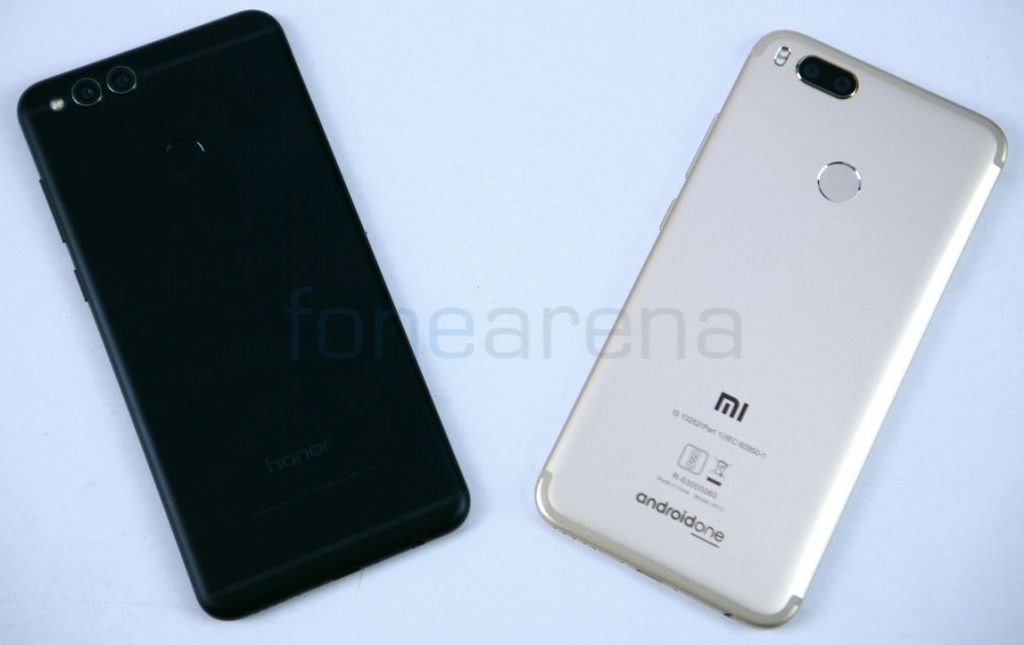 On the other hand, the Xiaomi Mi A1 also comes with a metal unibody design that feels solid in hand too. Having said that, the design of the Mi A1 is old school and sort of boring as well. The rear side of the device lacks originality as it shares looks with the likes of OnePlus 5 and Oppo R11s smartphones. The Xiaomi Mi A1 measures 155.4×75.8×7.3mm and weighs 165 grams. Both the smartphones feature Hybrid SIM slot and an “always active” fingerprint sensor that lets you add up to 5 different fingerprints. 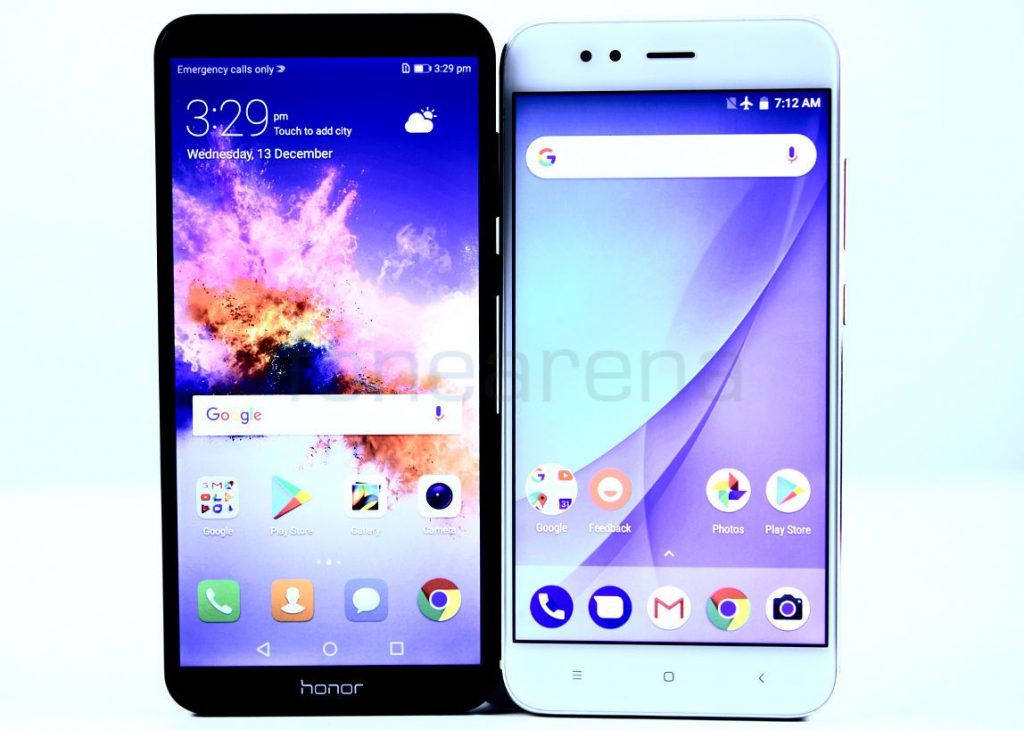 The Xiaomi Mi A1 on the other hand sports a 5.5-inch (1920 x 1080 pixels) Full HD 2.5D curved glass LTPS display. Even though the display quality looks good with decent viewing angles and color reproduction, the bigger bezels on the top and bottom look totally outdated when compared to the Honor 7X. 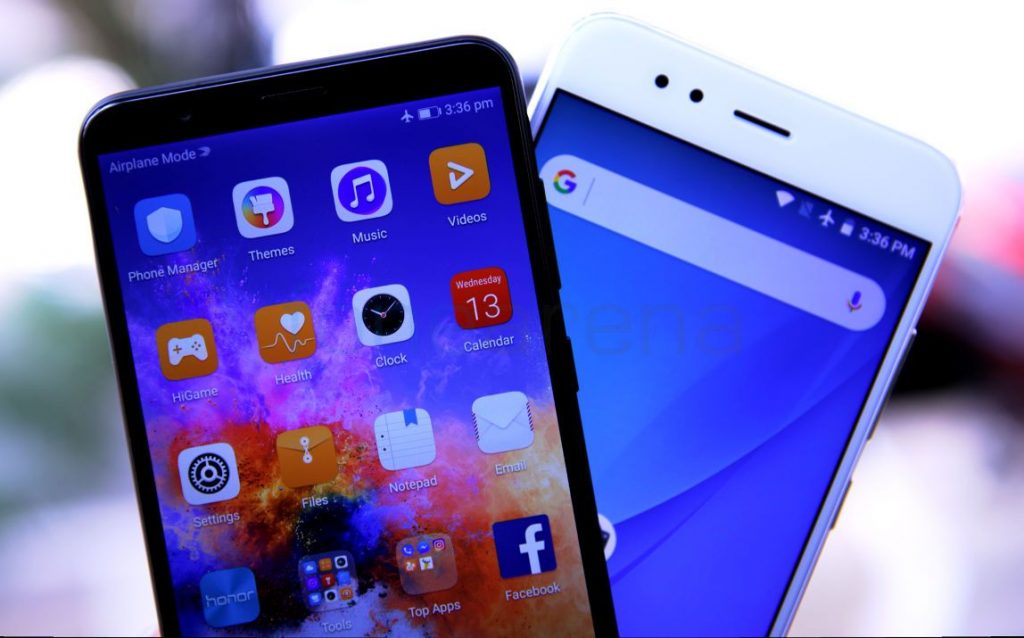 When it comes to onboard storage, the Honor 7X comes in two variants — 32GB/64GB internal memory, which is  expandable up to 256GB with microSD. However, the Xiaomi Mi A1 comes with 64GB of onboard storage with expansion option up to 128GB via microSD card. While Honor gives you options to choose from, Xiaomi doesn’t. Having said that, both the smartphones share 4GB RAM under the hood.

The Honor 7X is powered by Octa-Core Kirin 659 processor with Mali T830-MP2 GPU under the hood. As we used it for a quite some time, the phone performed pretty well without any lag or heating issues and the UI is fluid too. The multi-tasking is easier than ever, thanks to 4GB RAM. Moreover, the processor has been optimized so well, that it has efficient battery optimization bundled with the software.

On the other hand, the Xiaomi Mi A1 is powered by an Octa-Core Snapdragon 625 14nm processor with 650MHz Adreno 506 GPU on board. This device also offers smooth performance all over, but playing games or using the camera for a long time warms the phone slightly. 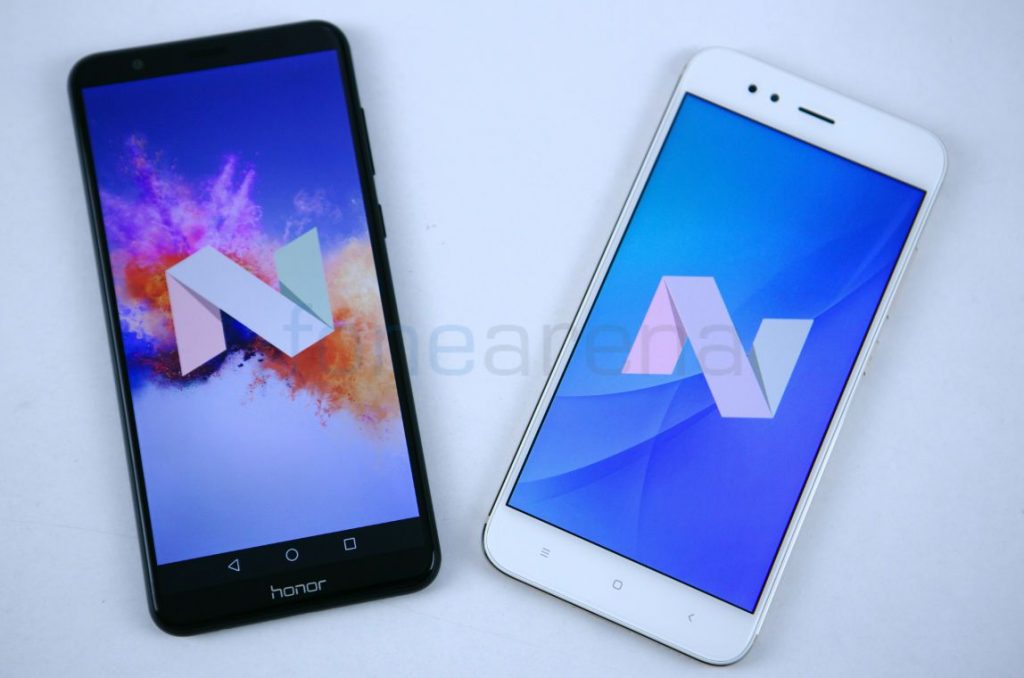 Coming to the software, it is purely subjective. While the Honor 7X comes with Android 7.0 (Nougat) with EMUI 5.1, the Xiaomi Mi A1 on the other side is shipped with stock Android 7.1.2 (Nougat). Unlike other Xiaomi devices, it comes with Stock Android with a couple of Xiaomi apps.

On the other side, the Honor 7X comes with more customization options, which might go well among the users who love to customize the device just like me. Having said that, Honor 7X with EMUI 5.0 is equipped with more features when compared to rival Mi A1. As I had mentioned above, I love to customize my device and I personally choose EMUI over the stock Android experience. 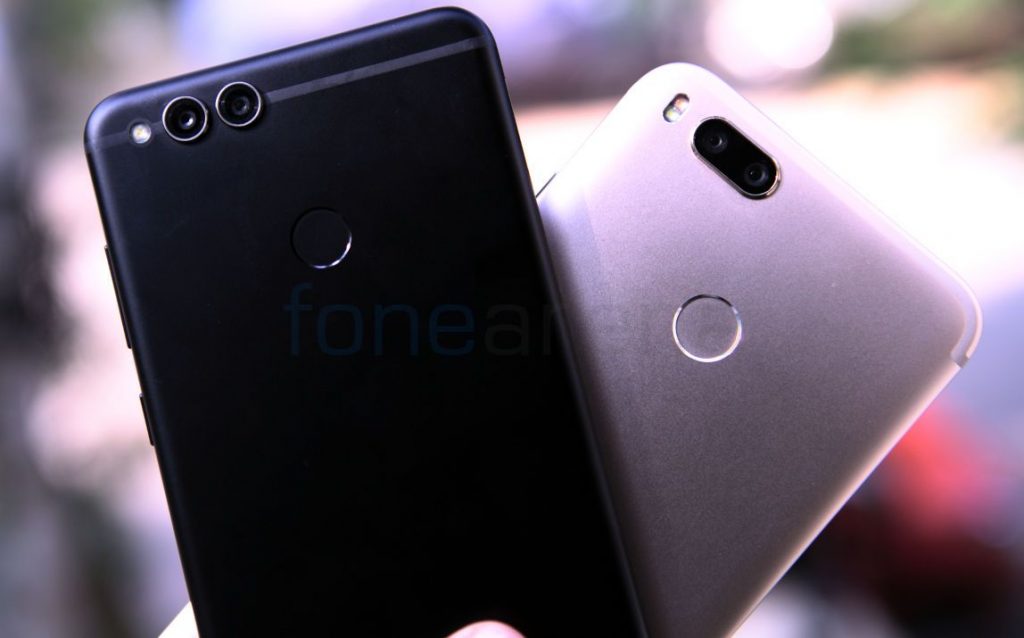 Talking about the optics department, the Honor 7X has way more options to explore than Xiaomi Mi A1. In terms of specifications, the Honor 7X comes with a 16MP rear camera with LED flash, a secondary 2MP camera, and 8MP front-facing camera. If you are an aspiring photographer, you would love Honor 7X as your company as it offers a huge amount of modes to choose from. The 7X comes with moving picture mode, portrait mode, wide aperture mode, light painting, Pro photo, Night shots, Slow-mo, time-lapse and more.

The front camera also brings us a slew of modes including portrait and moving picture mode. With portrait mode, you can get professional bokeh style effects from both fronts as well as rear cameras. When it comes to real-world usage, the output is good with a sharp image, fine details.

The Xiaomi Mi A1 comes with a 12MP rear camera with wide-angle lens, along with a secondary 12MP camera with telephoto lens and 5MP selfie shooter. Talking about the output, the Mi A1 rear camera produces a satisfactory result with finer details and good colors. The secondary camera too offers good bokeh effect but sometimes it struggles to locate definite edges. 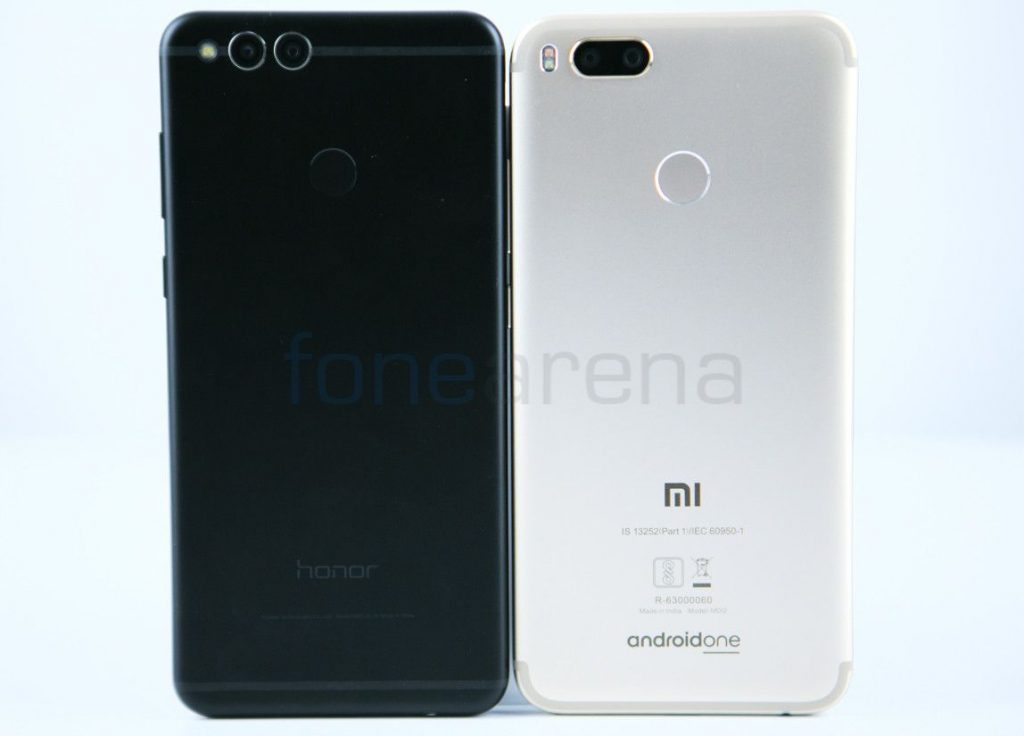 To conclude both Honor 7X and Xiaomi Mi A1 are value-for-money (VFM) smartphones that offer good performance in mid-range segment overall. But considering each and every aspects like display, customization, camera features, looks and more, the Honor 7X has an edge over the Xiaomi Mi A1.