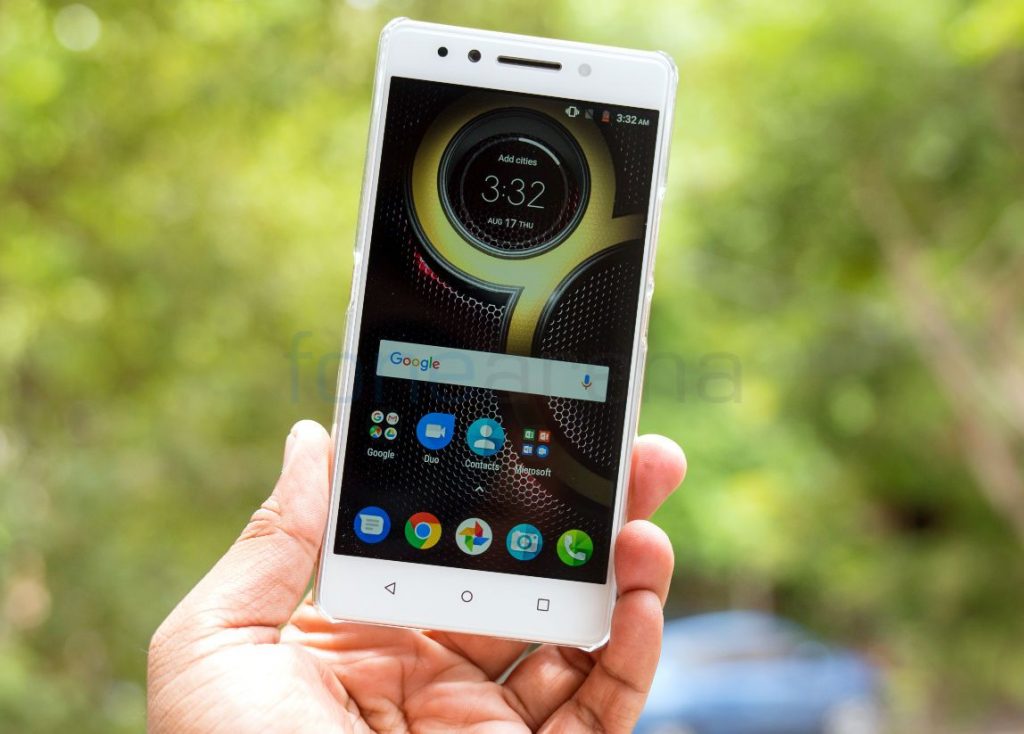 Lenovo launched the K8 Note smartphone in the ‘Note Series’ in India last month as the successor of last year’s K6 Note, skipping the K7 Note. Even though the design doesn’t change a lot, the phone is more powerful, has dual rear cameras and also has splash proof nano-coating. How good is the phone? Let us find out in the review. 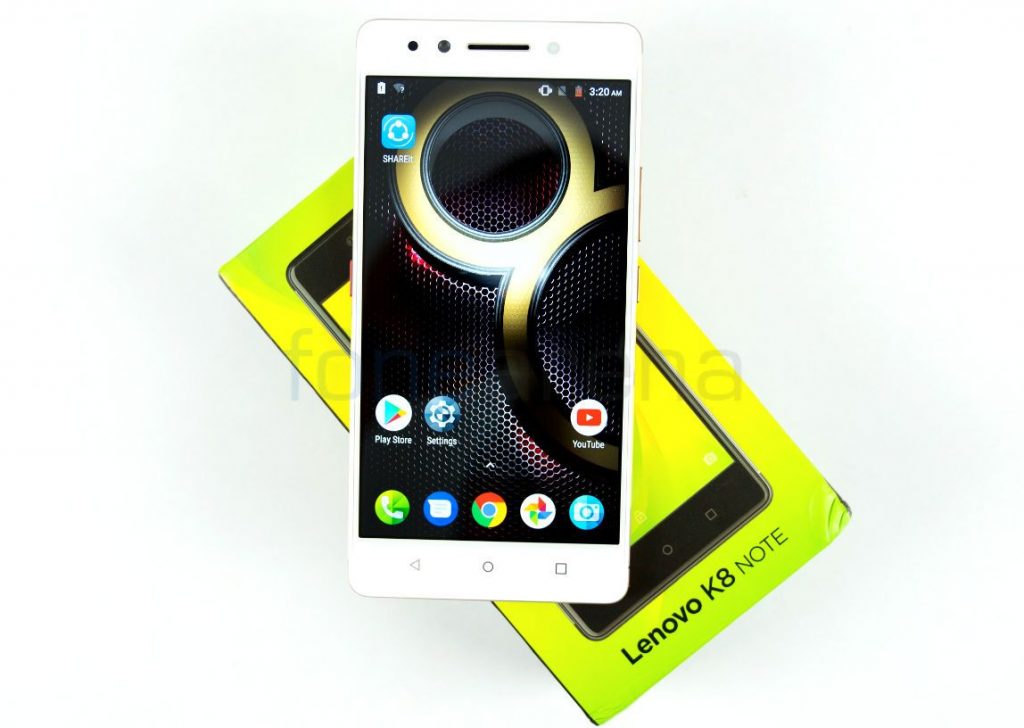 We unboxed the K8 Note recently, check out the video. 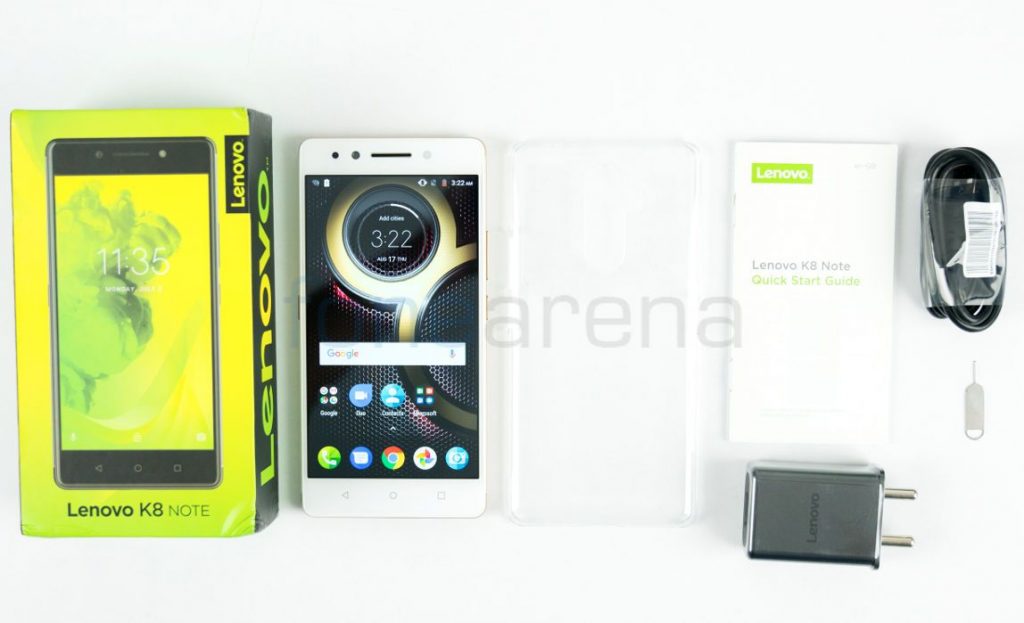 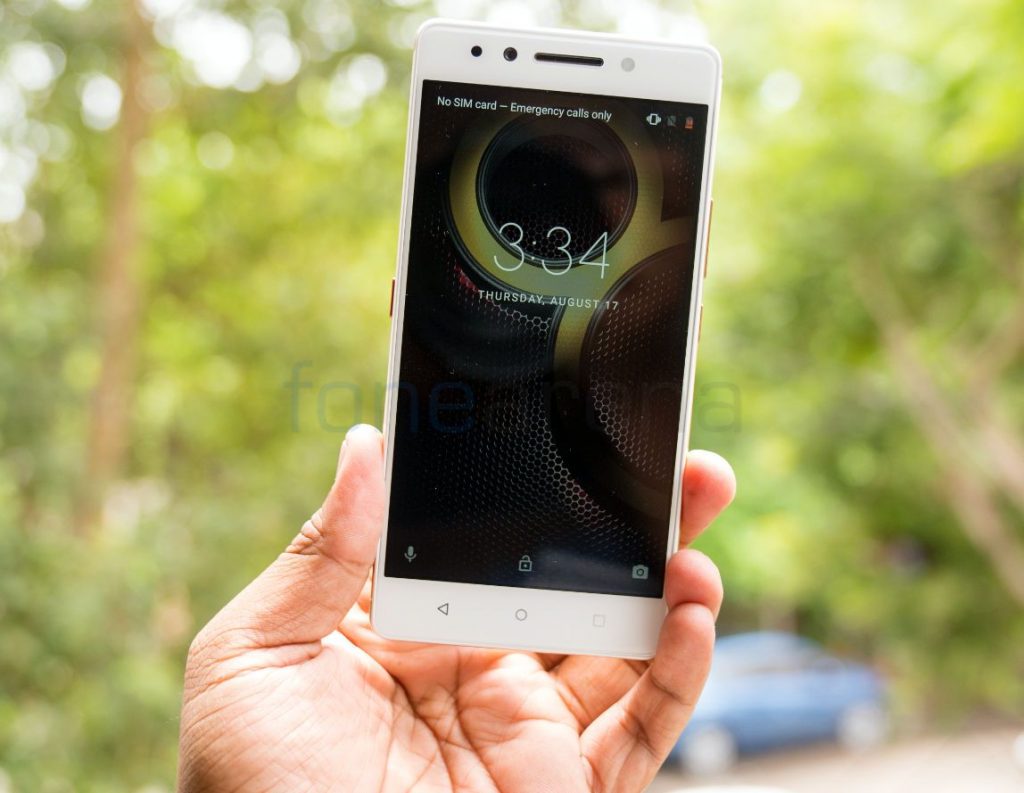 The K8 Note has a 5.5-inch display with a resolution of 1920 by 1080 pixels and a pixel density of about 401 PPI, same as most of the previous Note series phones from Lenovo and comes with a 2.5D Corning Gorilla Glass protection. It also has Oleophobic coating so it doesn’t attract fingerprints. Since it has 450 nits of brightness, it is bright and the sunlight legibility is good. It has a screen-to-body ratio of about 71%, slightly less than the K5 Note and K6 Note smartphones since there are huge bezels around the display. 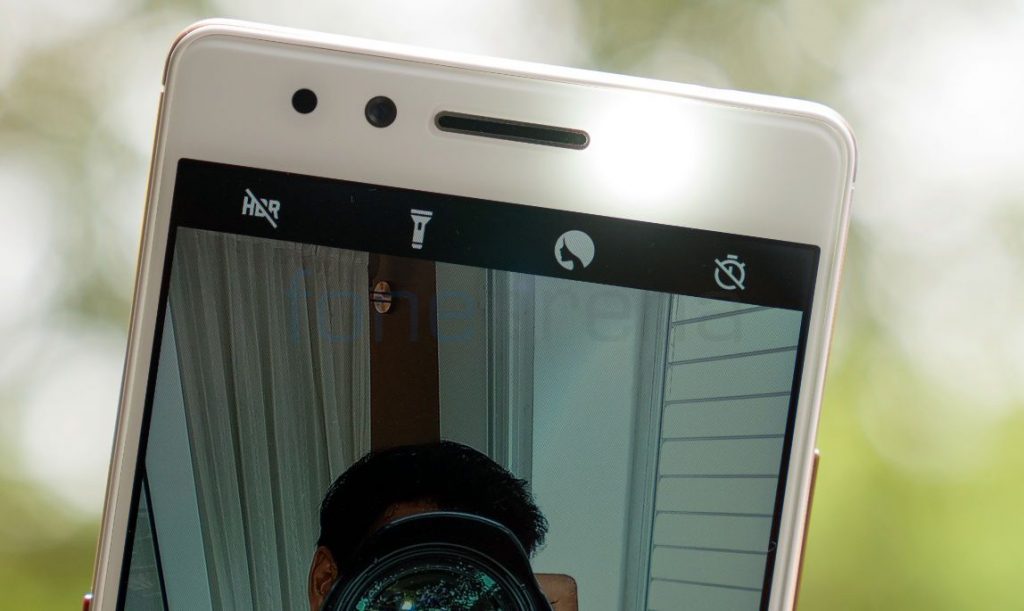 It has a 13-megapixel front-facing camera with wide-angle lens, f/2.0 aperture and there is also soft LED flash. There is a earpiece on the top along with the usual set of proximity and ambient light sensors next to it. It also has a tiny notification LED on the left corner, which glows in white color. It is hardly visible when it’s off. The phone also has gyroscope and magnetometer for VR.

The capacitive touch buttons are present below the display. These are note backlit, but offer haptic feedback when pressed. 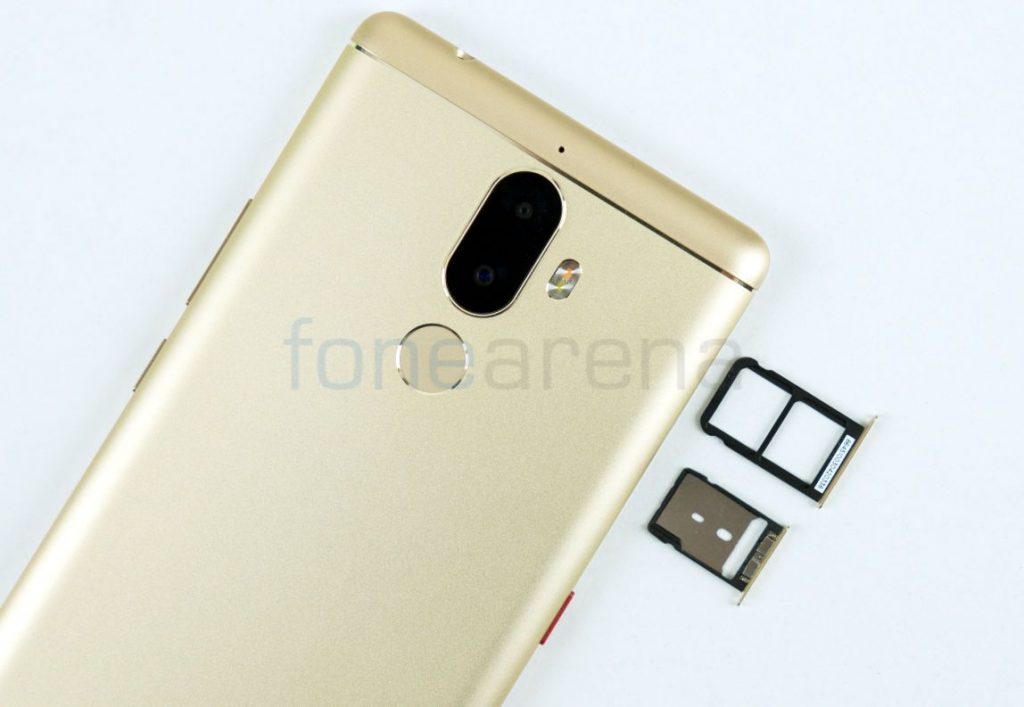 Unlike most other phones that comes with hybrid SIM slots, this has dedicated nano SIM slots as well as microSD card slot, which is a good move. 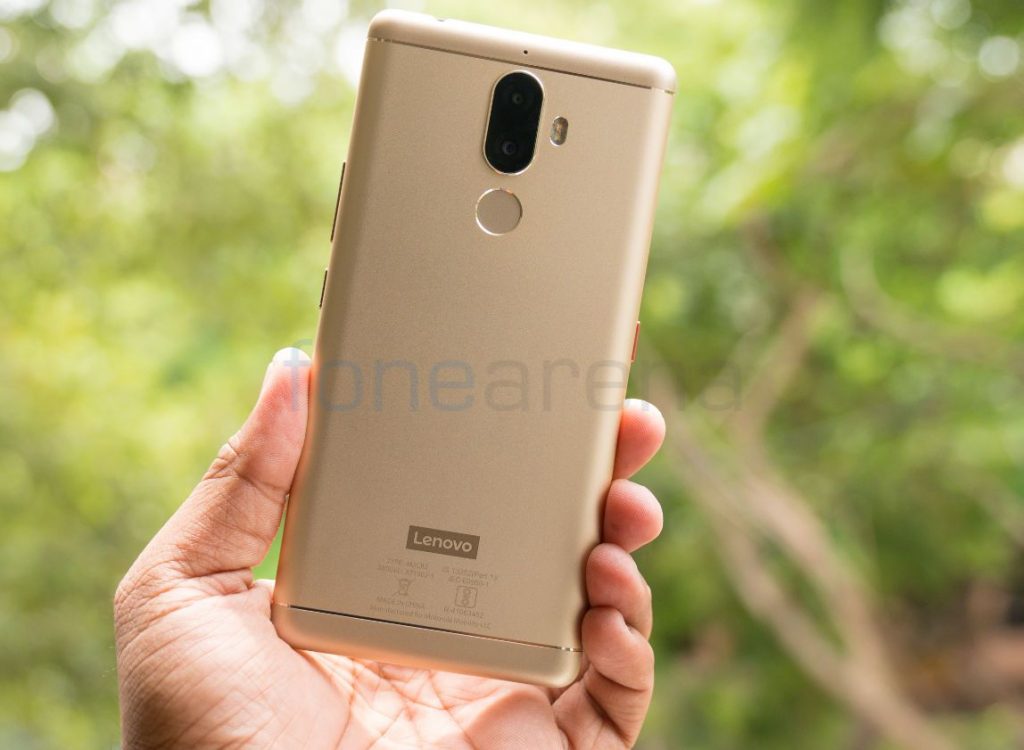 It has metal on the center part of the back with polycarbonate finish on the top and bottom parts where antennas are present and measures 154.5 x 75.9 x 8.5mm, slightly taller than the K5 Note and K6 Note smartphones. Even though it has the same 4000mAh battery, it weighs 180 grams, slightly heavier than the predecessor. The phone is also Splash Resistant (P2i Nano Coating), similar to Moto phones, so it is fine with everyday splashes and spills, but you can’t immerse it in water. We have the Fine Gold version, but the phone also comes in Venom Black color. It also comes with a clear protective case. Even though the design is familiar, the build quality of the phone is good. 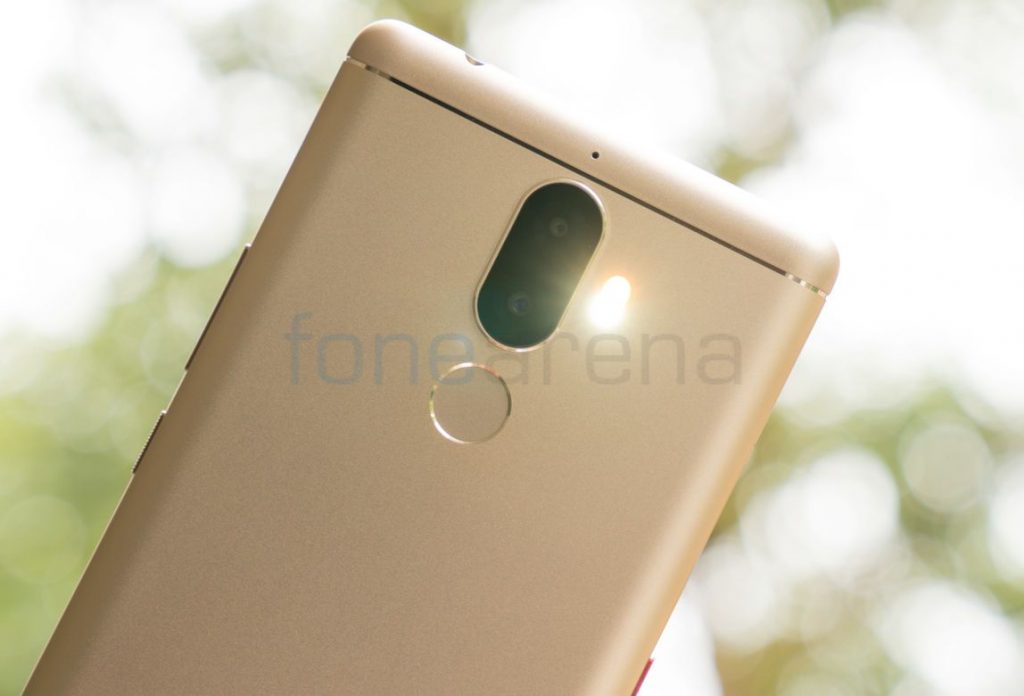 It packs a 13MP rear camera with PureCel Plus OV13855 sensor, dual-tone LED Flash along with a secondary 5MP camera with S5K5E2 sensor to capture depth information. It has a 13-megapixel front-facing camera with f/2.0 aperture, wide-angle lens and soft LED flash. 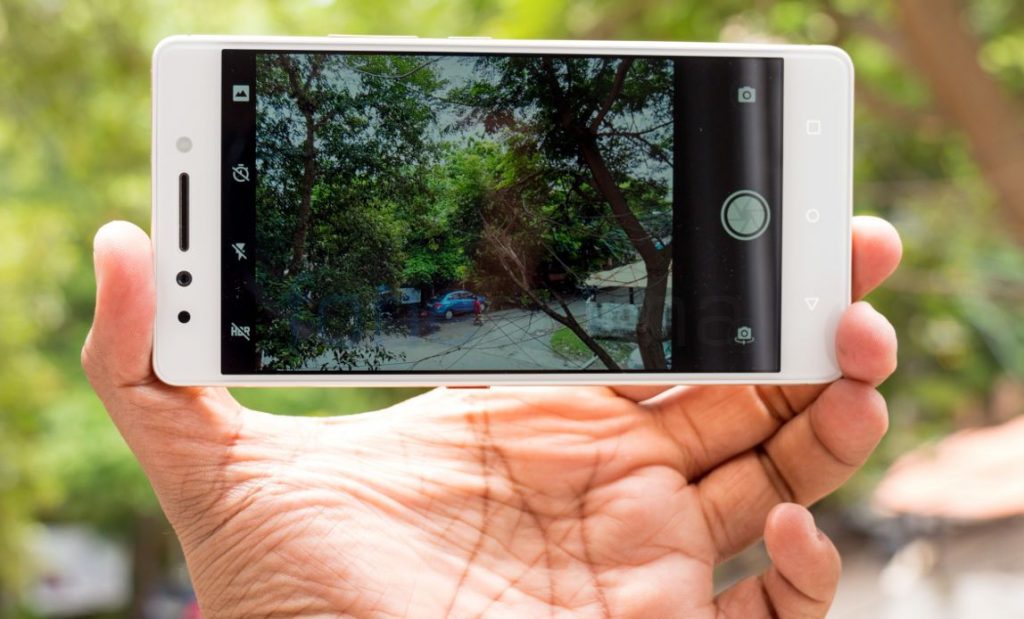 Coming to the image quality. Daylight shots were decent, but some images came out dull during cloudy or poor lighting conditions. Macro shots were good. Depth enabled shots lets you capture with effective f/2.8, f/1.8 and f/1.2 apertures using both the cameras, but the image size is reduced to 7MP. When the aperture reduces, you can see the blurred parts clearly. The depth effect looks better when taking portrait shots of people compared to objects.

HDR shots were pretty good with improved contrast and saturation. Low-light shots had noise but images were not that bad. Images with flash were good as well, but sometimes it was hard to focus. Thanks to dual-tone LED flash skin tone is natural. The front-facing camera is pretty good for selfies and video chats. Since it has a soft LED flash, it is not bright so it is not very useful when it is completely dark. 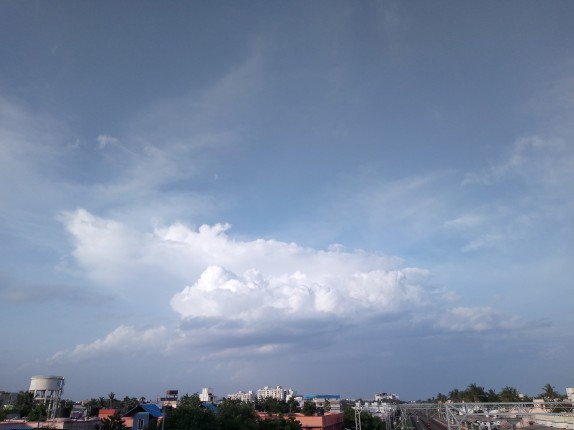 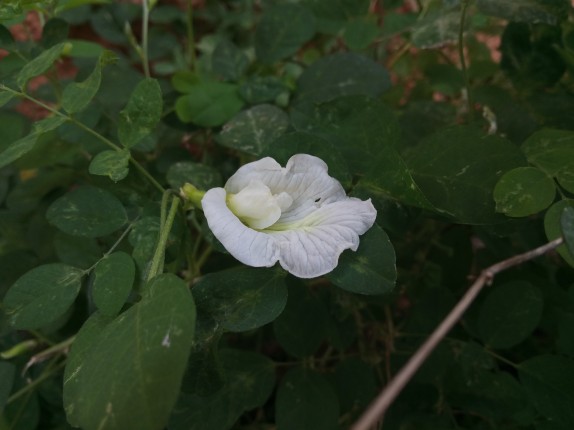 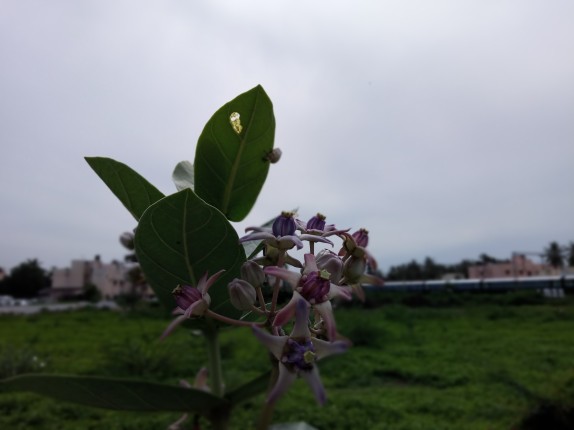 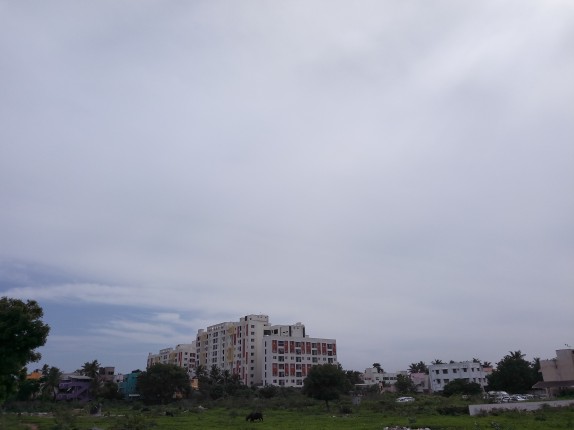 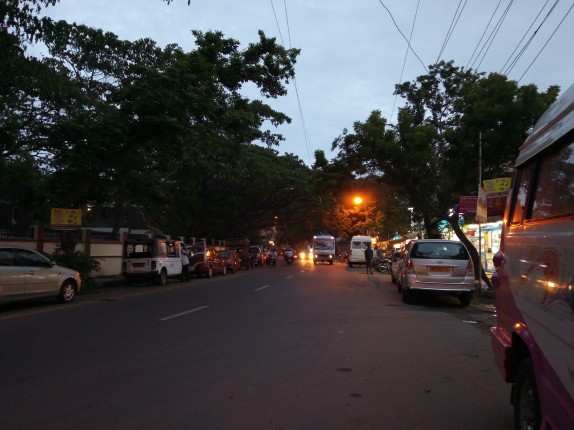 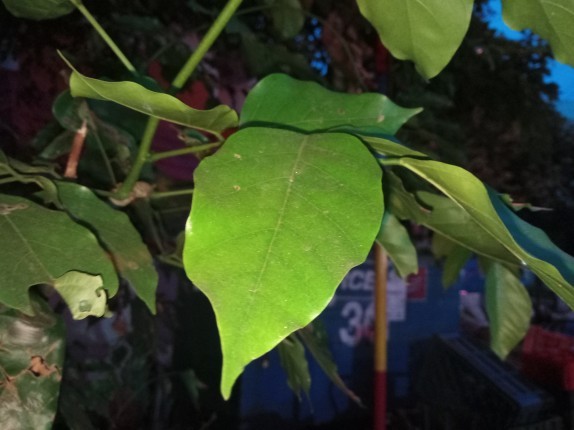 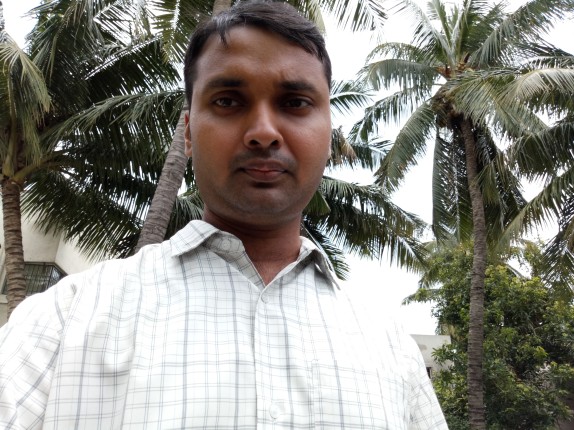 Check out the complete set of Lenovo K8 Note Samples here. It can record videos at 1080p Full HD video resolution at 30 fps. Quality is good. Thanks to the secondary microphone, audio is crisp. It doesn’t have option to record slow motion videos.

Coming to the software, the phone runs on Android 7.1.1 (Nougat) with Android security patch for July 2017. This is completely stock Android like Moto phones, unlike previous Lenovo smartphones that had Vibe UI. This is definitely a good move since it will be easy to provide updates. Lenovo says that the phone is guaranteed to get the next update, but it doesn’t say when the phone will get Android 8.0 (Oreo).

It also comes with Moto App launcher that is similar to Google Now Launcher but it replaces the apps button on the bottom tray with another slot for icon. You can swipe up to reveal all the apps. You can edit quick settings icons, change the position and replace it with few more in the options. As usual you have launch actions, multi-window and more that are available in Android 7.1. There is nothing to mention about the software in specific since it offers stock Android experience.

The Music Key on the left lets you easily play, pause or skip tracks easily. You can also set to launch camera, torch light or any other app. Lenovo doesn’t forget to include the VR split-screen mode that lets you view the whole UI using the VR glasses. After enabling this option from the ‘display’, you can press and hold the power button to turn on this mode.

Out of 4GB RAM, 3.7GB of RAM is usable, out of which about 1.4GB of RAM is free when some apps are running in the background. Out of 64GB of internal storage you get about 50GB of usable storage since OS and apps take up about 14GB of space. It also comes in 3GB RAM with 32GB storage version. It doesn’t show option to move apps to the SD card, but 32GB is more than enough to store a lot of apps.

Apart from the usual set of utility apps and Google Apps, it comes with Microsoft Apps such as OneNote, Outlook, PowerPoint, Skype and Word.

During set up you get three-page long apps to choose from that gets installed when the phone is connected to the internet. You can easily skip this, which is a good thing.

It doesn’t have a separate music player, so you have to use Google Play Music. It can play a range of audio formats and it has FM Radio with recording. Thanks to Dolby Atmos, loudspeaker output is good and clear even in full volume. Audio output through headphones is good as well.

It has 4G support with support of 4G LTE bands (TDD B40 2300MHz, FDD B3 1800MHz and B5 850MHz) for India. Both the SIMs support 4G, but you can enable 4G only in one SIM at a time, while the other goes to 3G. You can set the default SIM for voice call, messaging or data connection. It has Wi-Fi 802.11ac (2.4GHz and 5GHz), Bluetooth 4.2, GPS and USB OTG support. Since this is a dual SIM phone you get option to call or send SMS from either SIMs. It comes with Gboard as the default keyboard. Calls were clear and we did not face any call drops. 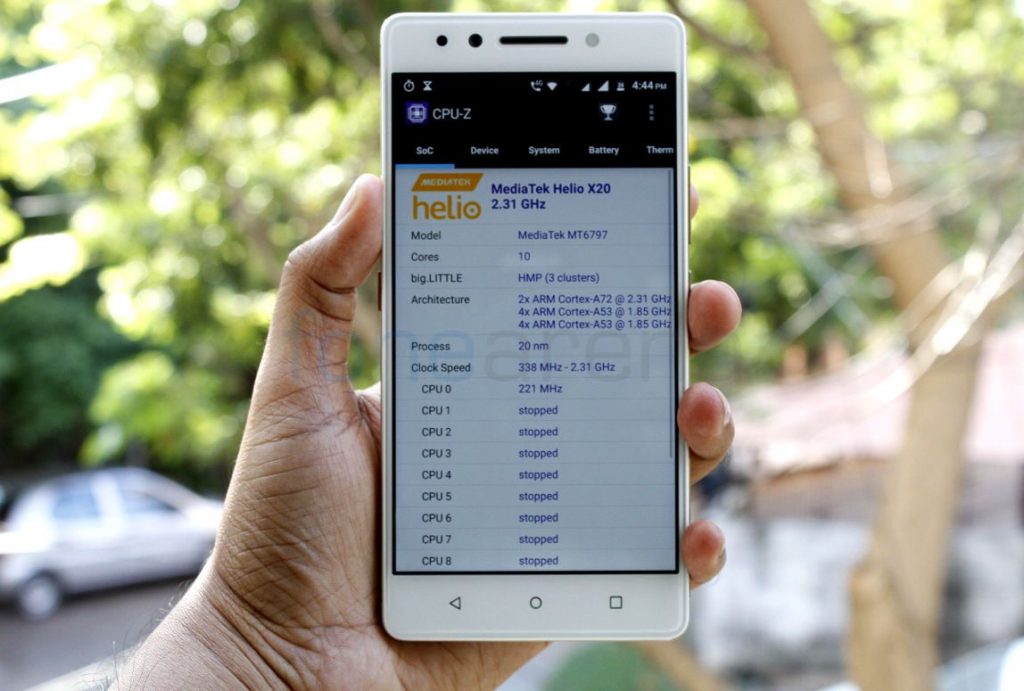 Coming to the performance, it is powered by a Deca-Core MediaTek Helio X23 20nm processor with Mediatek Tri-Cluster Deca-core architecture (2x 2.3GHz ARM Cortex-A72 + 4x 1.85GHz ARM Cortex-A53 + 4x 1.4GHz ARM Cortex-A53), even though CPU-Z shows it as X20. It has 4GB/3GB of RAM depending on the variant. Performance is good without any lags. Thanks to 4/3GB of RAM, multitasking is smooth too. ARM Mali T880 MP4 GPU offers good gaming performance without any lags. It gets heated occasionally such as 4G usage or when you are gaming for a long time, but it doesn’t get too hot to handle. Check out some synthetic benchmark scores. 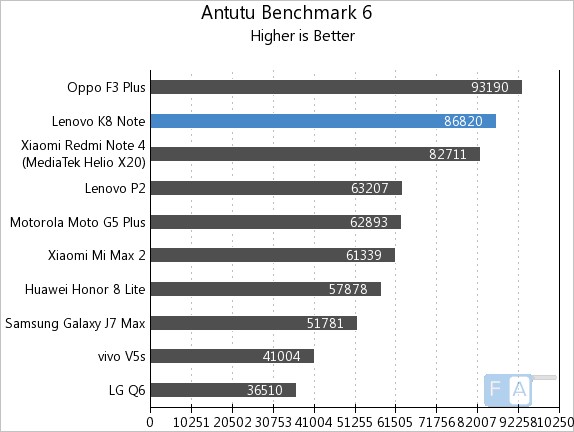 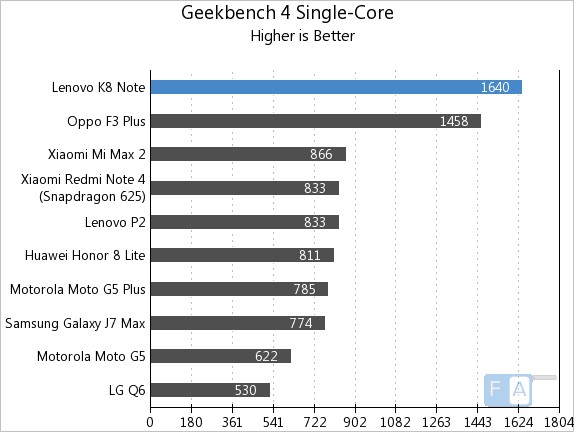 It scored 1640 points and topped the Geekbench 4 Single-Core benchmark. 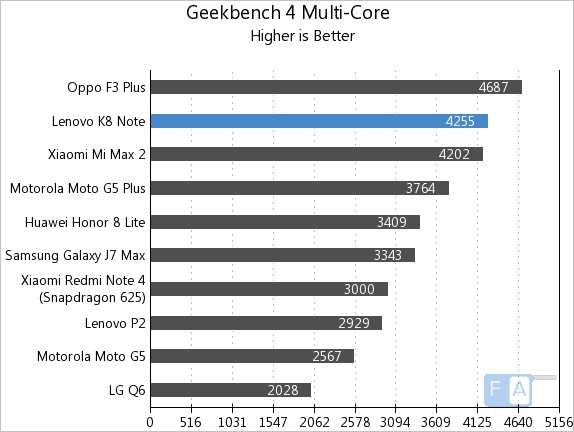 It scored 4255 points in the Geekbench 4 Multi-Core benchmark. 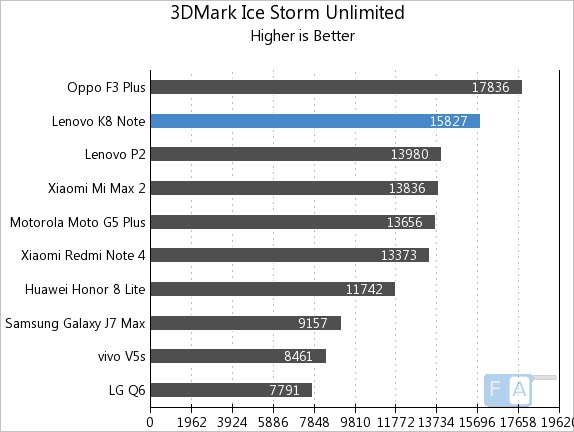 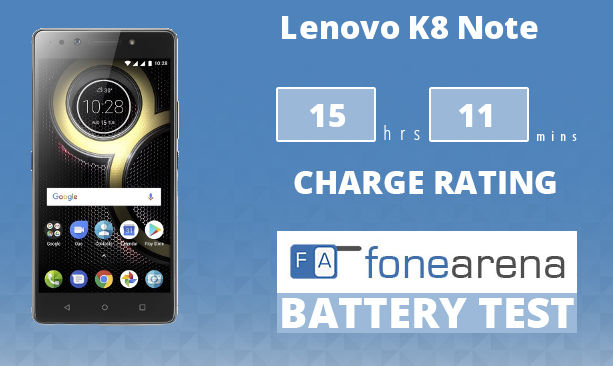 Since it comes with 15W turbo charger, it takes just 48 minutes to charge it from 0 to 50% and about 2 hours to charge the phone fully. 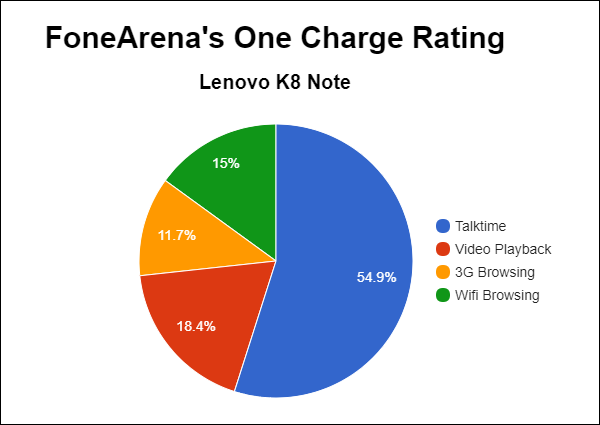 It achieved One Charge rating of 15 hours and 11 minutes, which is good compared to other phones in the Note series, mainly due to brilliant talk time, otherwise it is just average and could be better. Check out the complete set of battery life test results here.

Overall, the Lenovo K8 Note is a worthy successor to the K6 Note starting at Rs. 12999 for the 3GB RAM with 32GB storage version, but the 4GB RAM with 64GB storage version is just Rs. 1000 more. It has dedicated SIM slots, comes with splash-resistant coating and has stock Android, but there are some downsides such as quick battery drain on standby and occasional heating issues. Hope these can be fixed through updates. Dual camera implementation is fine, but the overall image quality is average and could have been better.

The Lenovo K8 Note goes on sale exclusively on Amazon.in every week. To summarize, here are the pros and cons of the smartphone.