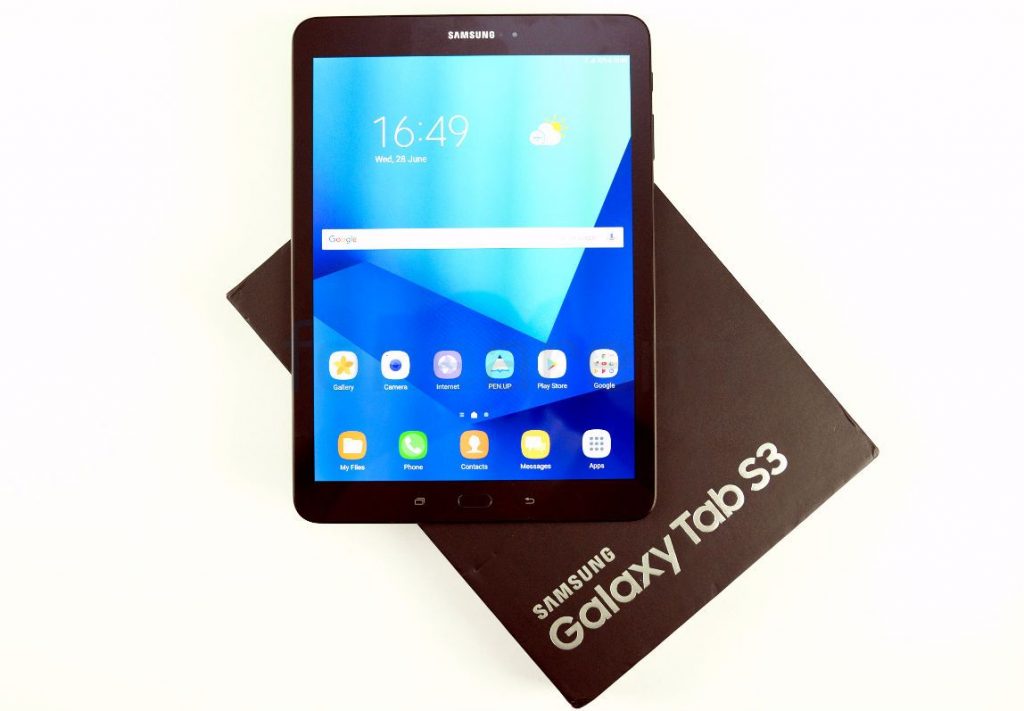 As per the latest reports from various sources, the tablet sales in and out of India are declining due to the rise in phablets. While some brands including HP and Lenovo are rolling out their respective Hybrid laptops, tablets without keyboards is losing its relevance.

Amidst this shrinking market, Samsung took a huge gamble and released its high-end with Qualcomm Snapdragon 820 chipset tablet dubbed as Galaxy Tab S3 in India with a humongous price tag of Rs. 47,990. We’ve been using this glossy black slate for sometime, and come up with a review. Does the Galaxy Tab S3 outperform latest iPad? Let’s check it out.

We had unboxed the Samsung Galaxy Tab S3 already. Check it out. 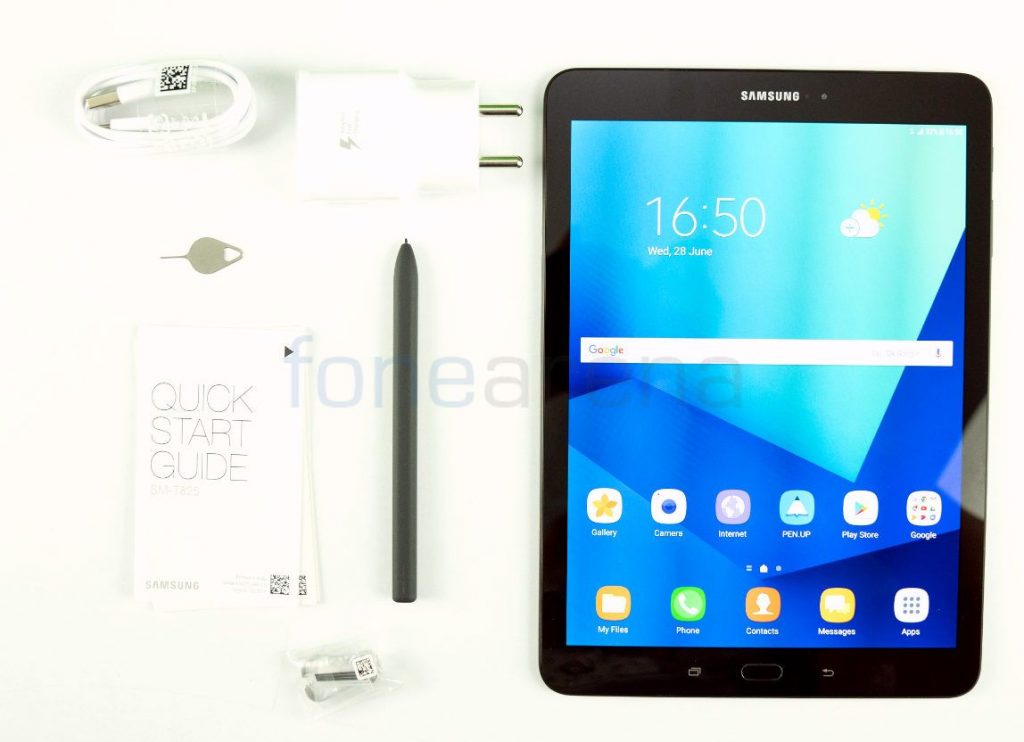 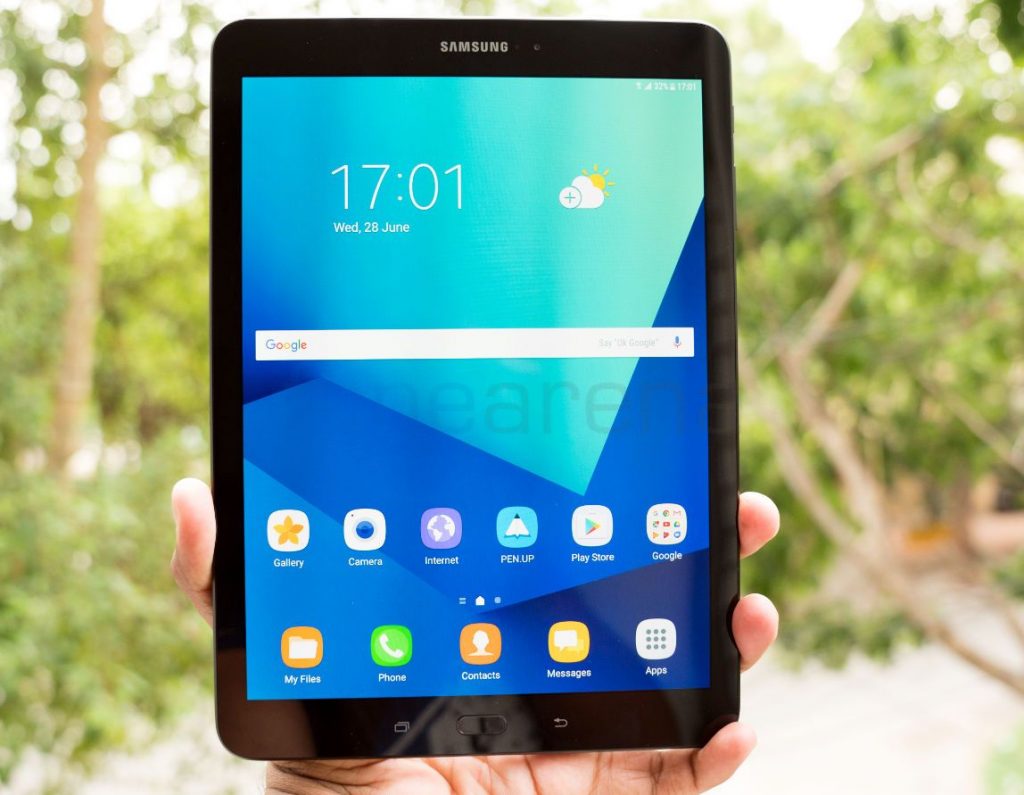 The Samsung Galaxy Tab S3 sports a 9.7-inch QXGA Super AMOLED display with a resolution 2048×1536 pixels. The display is bright, vivid and the color reproductions are good as well. When introduced into the outdoor condition, the display tends to be reflective as it is glossy bringing down the sunlight legibility somewhere near decent. Moreover, watching movies is such an eye candy in this device for sure.

Moving on to the design, the Galaxy Tab S3 looks like a blown up smartphone. This slate comes with a glass panel on both front and back just like its flagship Galaxy S8 series of smartphones. It looks and feels premium, but on the downside, you need wipe constantly, as it attracts fingerprint heavily. 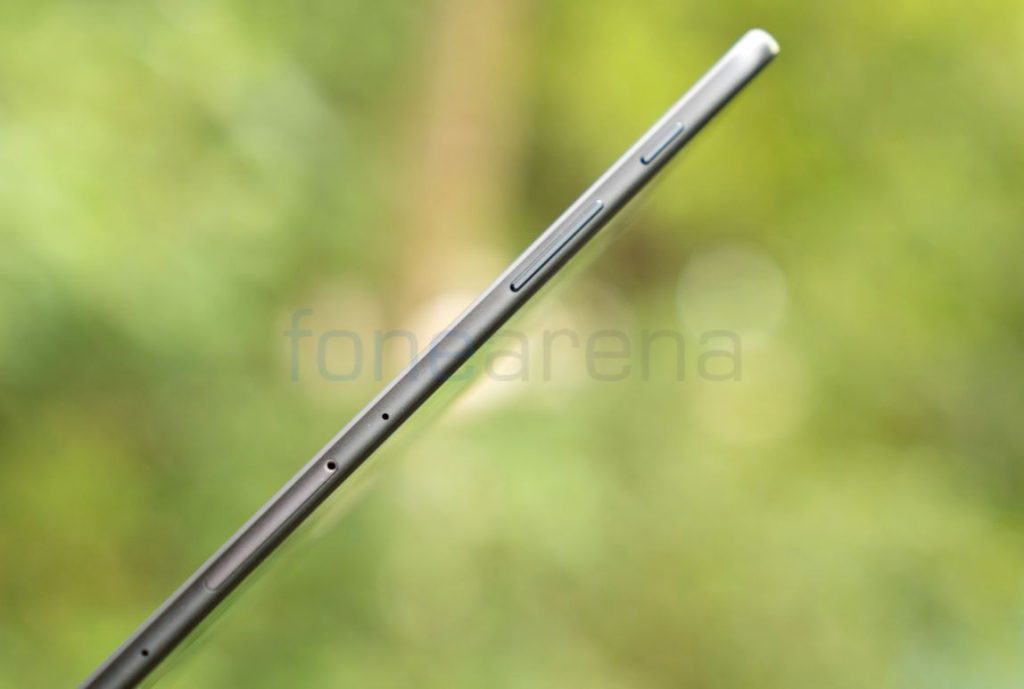 Further, it is surprisingly thin at just 6mm thick and weighs around 429 grams nicely distributed across the body. The S Pen doesn’t have to place to fit anywhere inside of the tablet, unlike Galaxy Note smartphones.

Talking about the placements, the Galaxy Tab S3 has a 5MP front camera on the front just above the 9.7-inch display. At the bottom, we have Samsung’s traditional home button which also acts a fingerprint scanner along with two capacitive buttons on either side of the device. On to the right, we have a power button, volume rockers, SIM & MicroSD card slot, and microphones.

Moving to the bottom, we have two speaker grilles on both the sides, 3.5mm audio jack and USB Type-C port. On the left-hand side, we have the pogo port for keyboard attachments. The top side of the tablet has another two speaker grille tuned by AKG. The speakers are loud and good enough for watching videos and other multimedia purposes. 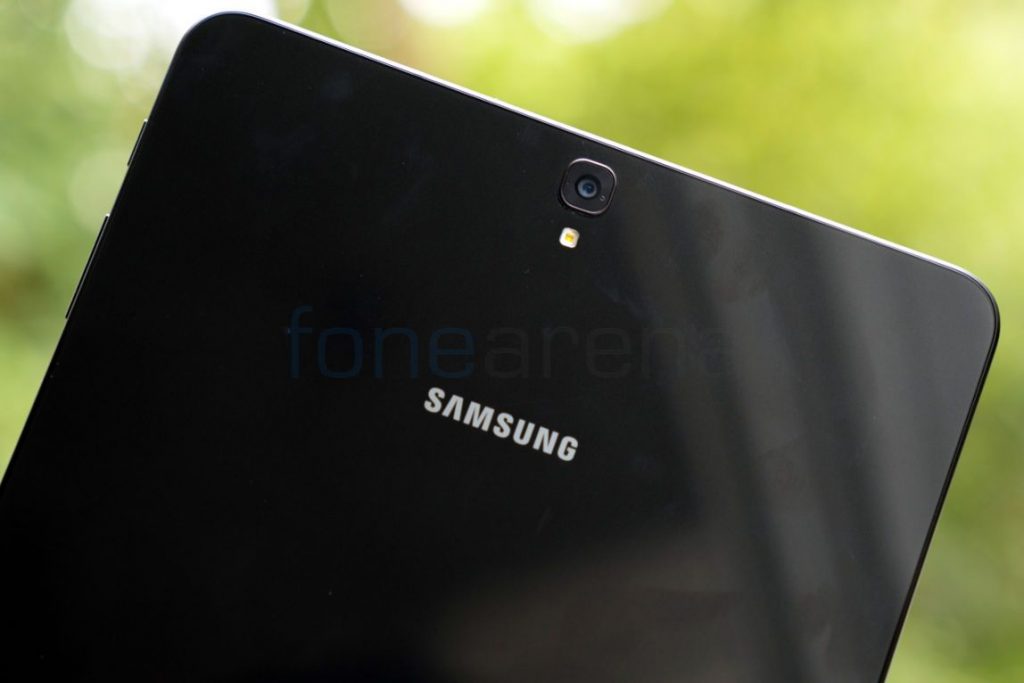 Turning back the tablet, we have a 13MP rear camera with dual tone LED flash just beneath it. Apart from that, it is so plain with just a Samsung branding in the middle. 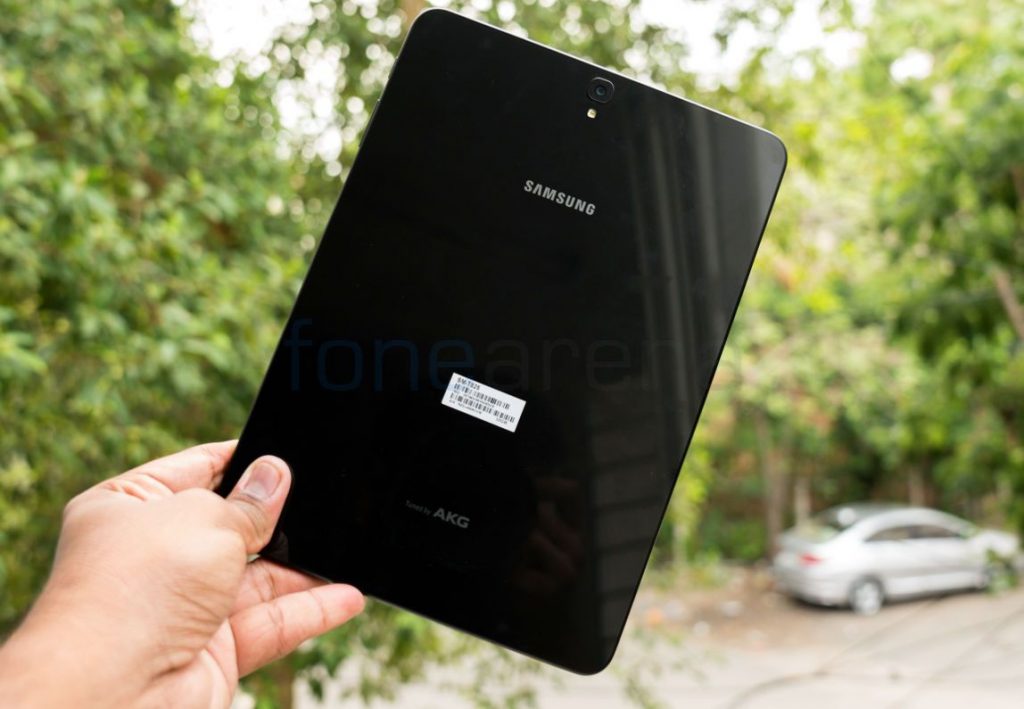 Moving on to the optics, the Galaxy Tab S3 sports a 13MP rear camera with Dual LED flash and 5MP front facing the camera. In our usage, the photos came out very well during daylight conditions with the good amount of details. Having said, that, it produces slight noise on some part of the pictures as well. Also, the focus struggles a bit when it comes to Macro photos. At times, it will frustrate you as well. When it comes to the low light, the struggle here is obvious with lots of noise/grains in the photo. The 5MP front camera is good for taking selfies and video calling too. Here are some of the pictures captured on this device (Click the image to view full resolution sample). 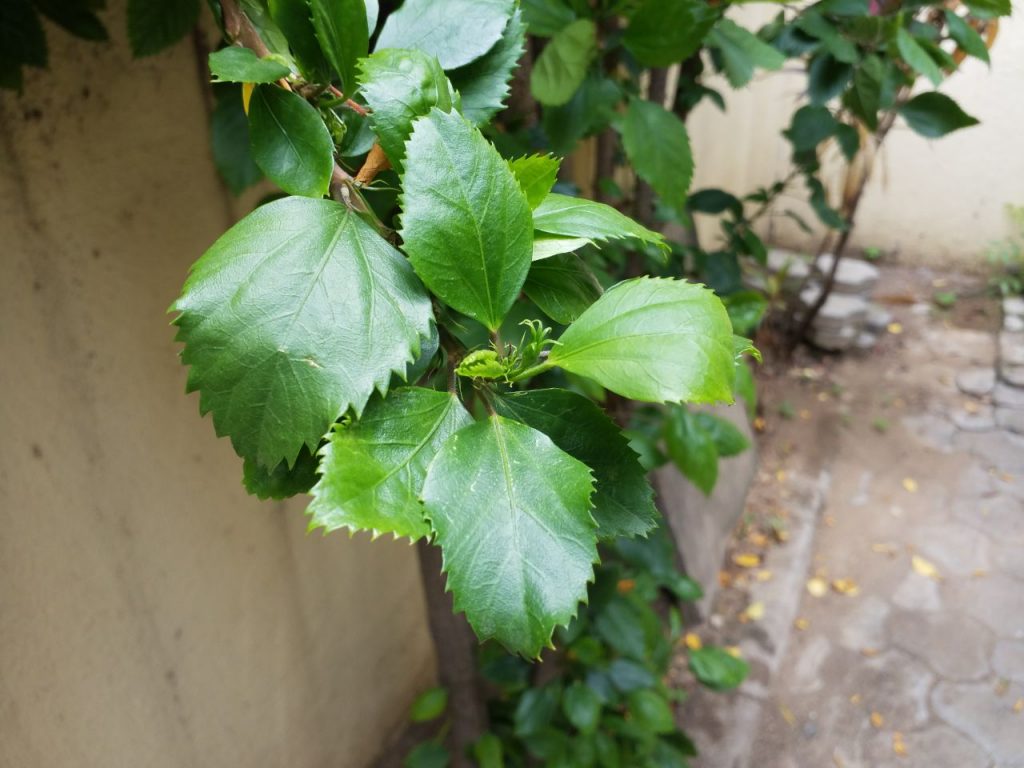 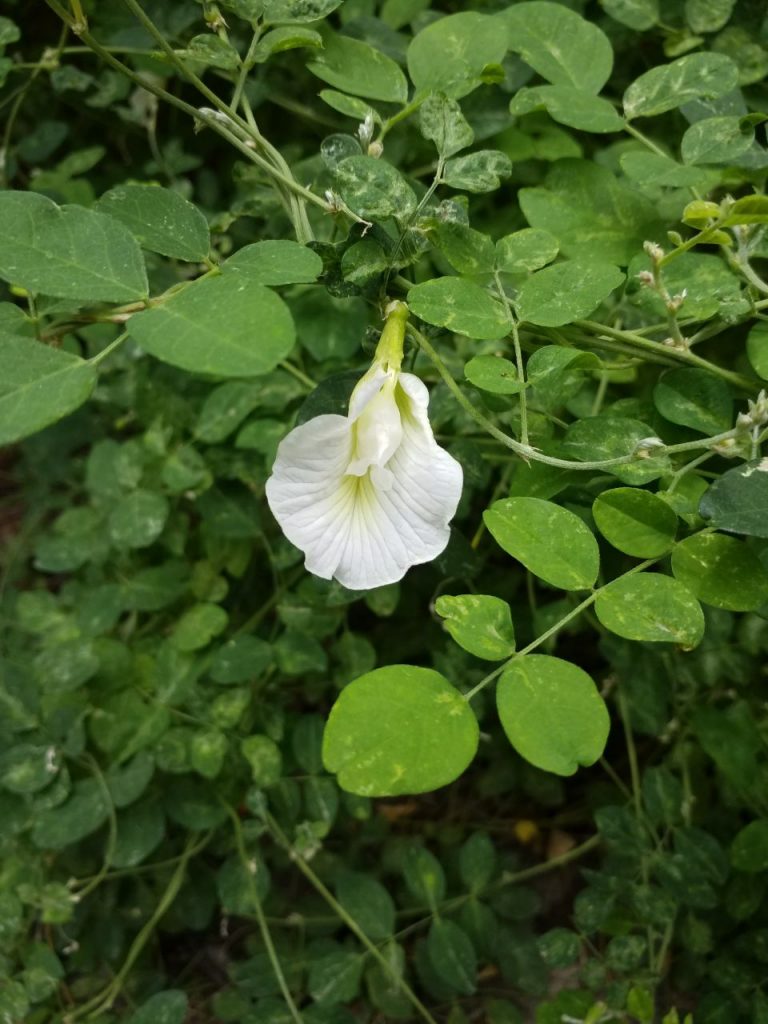 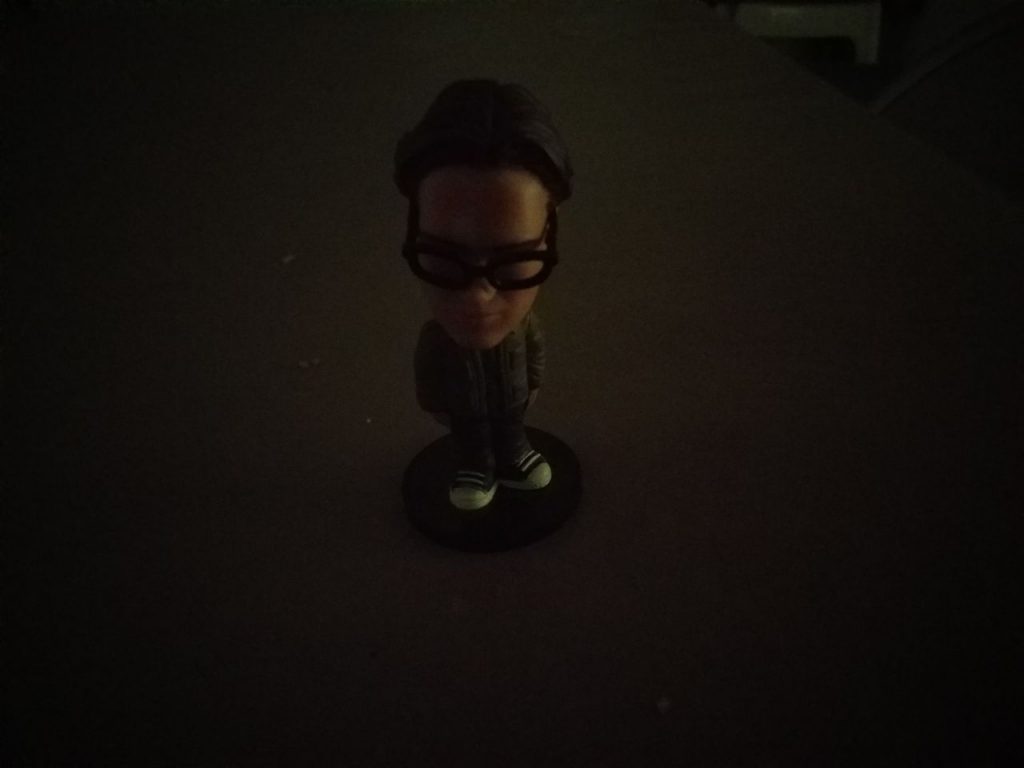 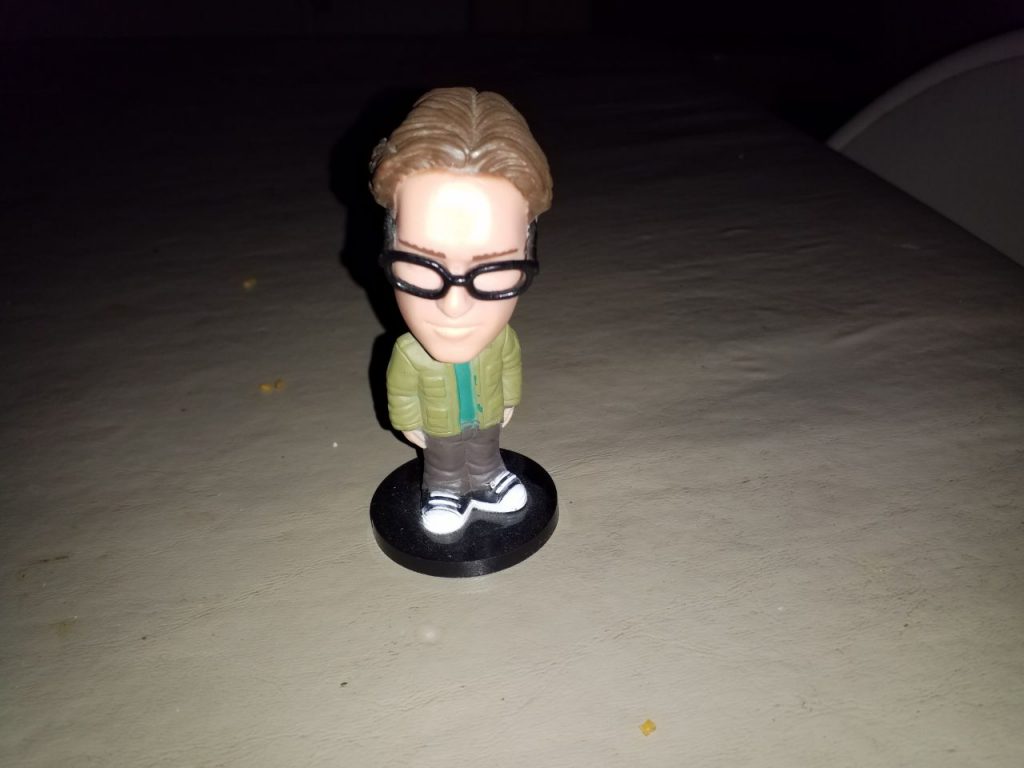 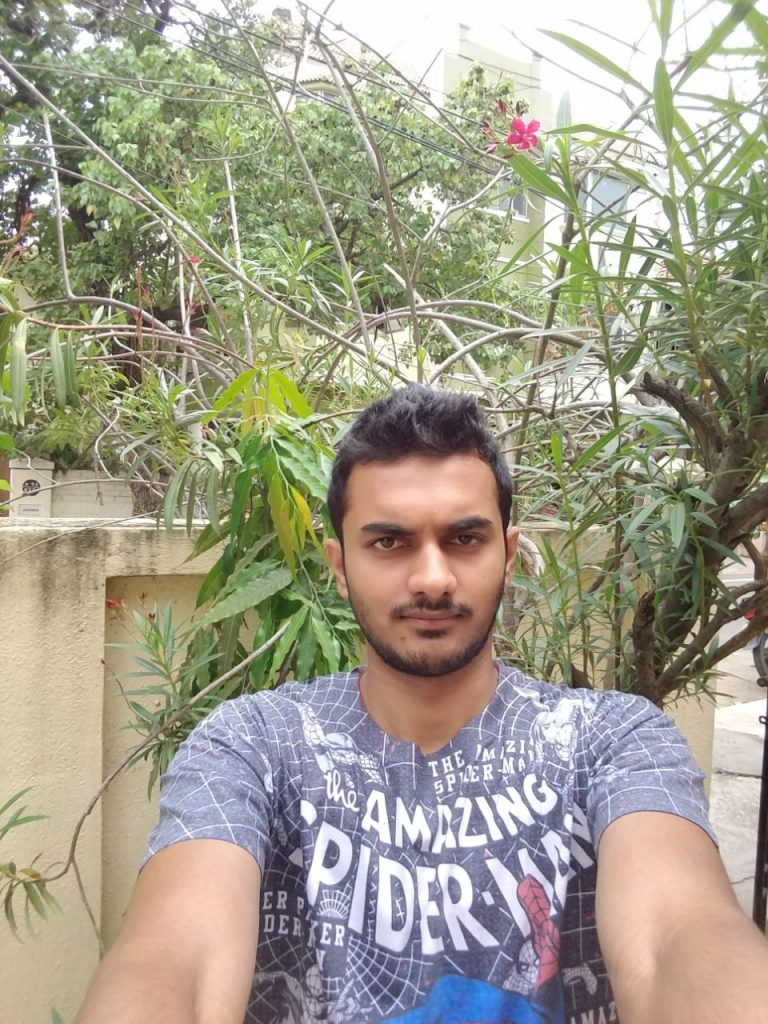 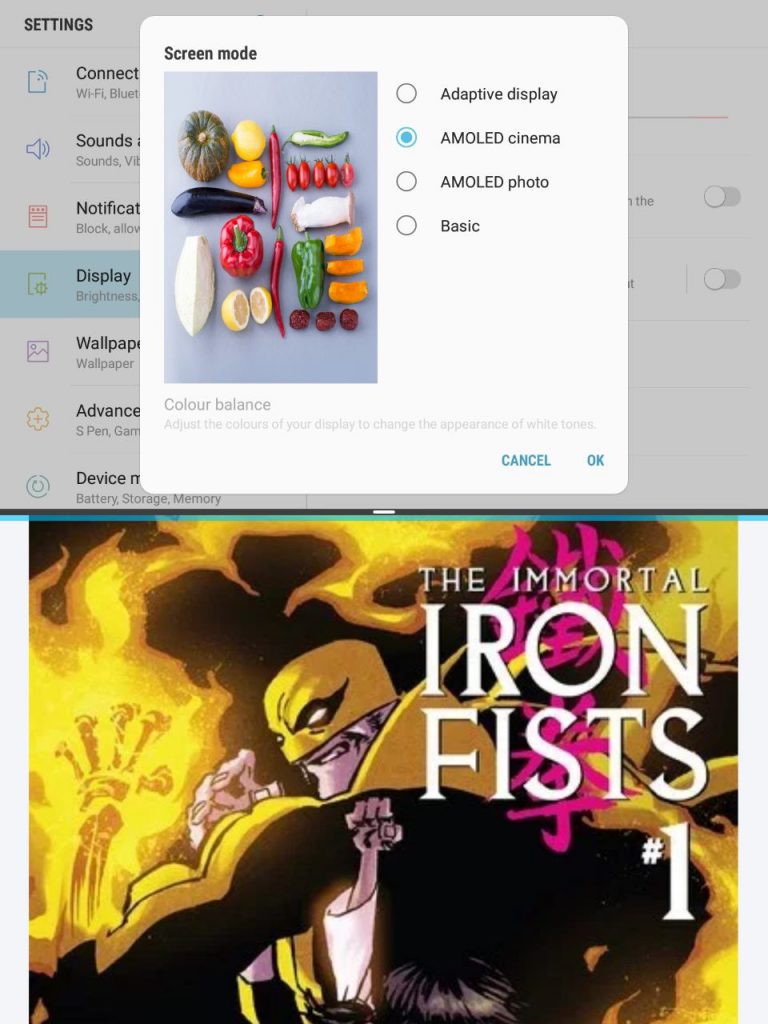 The Galaxy Tab S3 is shipped with Android 7.0 Nougat on top of Samsung Experience UI on out of the box. On the lock screen, you can access dialer and Samsung Notes, in case if you want to take some notes urgently. It also comes with a Multi-tasking feature, where you can open two apps next to each other to watch a video and take notes at the same time. Moreover, you can tap and hold an app icon to open a quick options menu that lets you perform tasks such as uninstalling apps or moving them to Secure Folder without having to open the app.

Talking about the Secure Folder, when you move the app into it, it creates a private, encrypted space on your tablet. Once the apps and data are moved, it is sandboxed separately on the device just to gain an additional layer of security and privacy, thus further protecting them from malicious attacks. 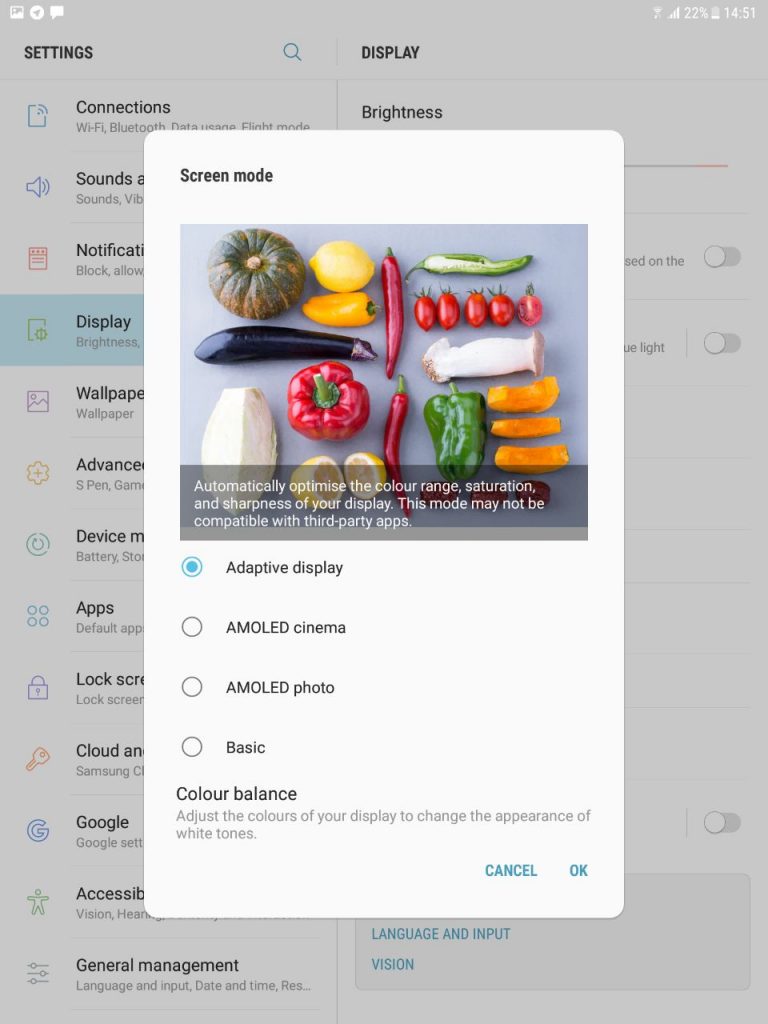 It also comes with 4 types of screen modes — Adaptive display, AMOLED cinema, AMOLED photo and Basic, which has their own functionality. Moreover, this slate comes with a Blue Light Filter, which helps you to avoid eye strains at night times.

Users can even schedule Bluelight filter during their usage. The UI is clean, minimal and easy to navigate as well without cramming apps like before. Apart from Samsung Utility and Google Apps, it has Microsoft Office apps as well that includes Word, Powerpoint, Excel, OneDrive and much more. As it doesn’t have an own music player, Google Play Music opens, when you select any songs.

You can manage your device’s battery life, storage, RAM usage, and security under device maintenance option in settings. Out of 32GB of internal storage, 21.2 of storage is usable. If it’s not enough, you can also expand the memory using microSD card slot as well. Out of 4GB RAM, the user will get around 1.8GB RAM as well.

Talking about the performance, the Galaxy Tab S3 is amazing when it comes to smoothness and multitasking. The Snapdragon 820 chipset and 4GB RAM compliment each other so well. The gaming on this tablet is crisp and on to the point without any frame drop. Media experience is also good, thanks to the four speakers on both sides. Check out some synthetic benchmarks below. 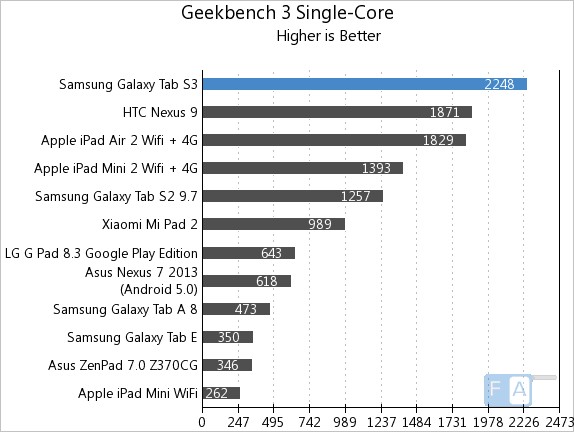 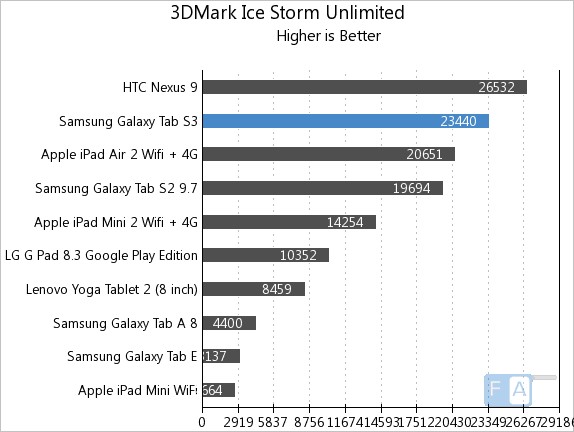 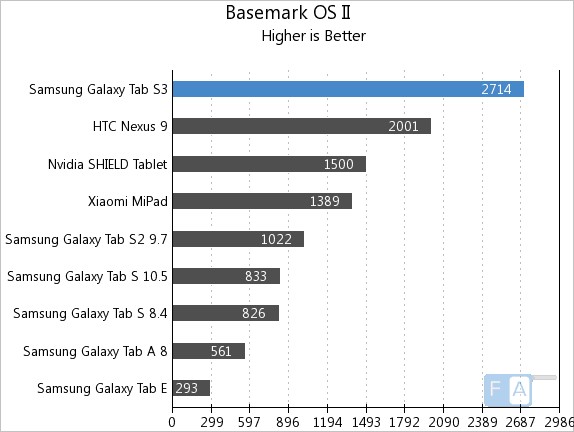 Moving on to the S-Pen, it comes in a plastic body matching the color of the tablet. This pen from Samsung is rather small than Apple Pencil and Microsoft Surface Pen.

In order to make full use of S-Pen, it offers Samsung Notes and a social network app for people called Pen.UP to those who like to draw. The writing and drawing part with S-Pen is good and also captures every angle accurately. This comes handy when you are drawing on the tablet.

The Samsung Galaxy Tab S3 supports connectivity options including 4G LTE, Bluetooth 4.2, WiFi 802.11 ac (2.4GHz/5GHz) MIMO, Wi-Fi Direct, Bluetooth 4.2, GPS, GLONASS and USB 3.1 Type-C. Call quality in this tablet is good, but having said that, it’s too big to hold in your hand while talking on the speakerphone. We often used headphones with mic to tackle this awkward situation in public places. It doesn’t have VoLTE support. 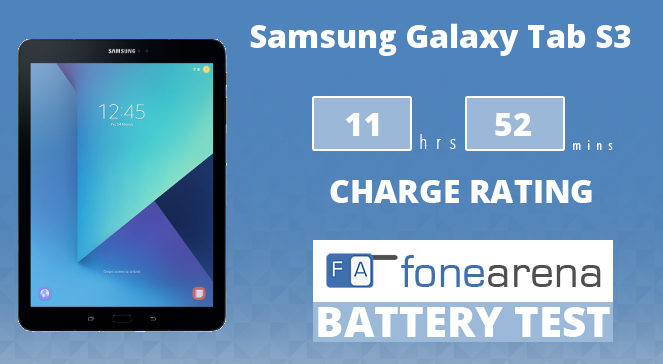 The Samsung Galaxy Tab S3 is powered by a 6000mAh battery with Fast Charging technology. In real-time, we managed up to a day on casual usage including browsing, watching videos on YouTube and two episodes of “Genius”. It also takes 2 hours and 45 minutes for charging from 0 to 100% when charged in Adaptive fast charging adapter. 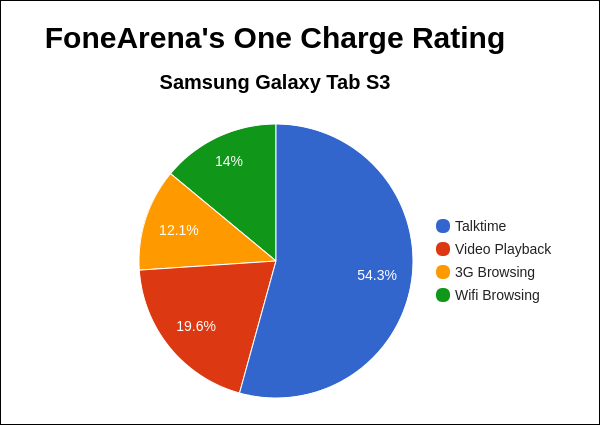 It achieved a One Charge Rating of 11 hours and 52 minutes, mainly due to talk time, otherwise this is just average compared to other tablets. 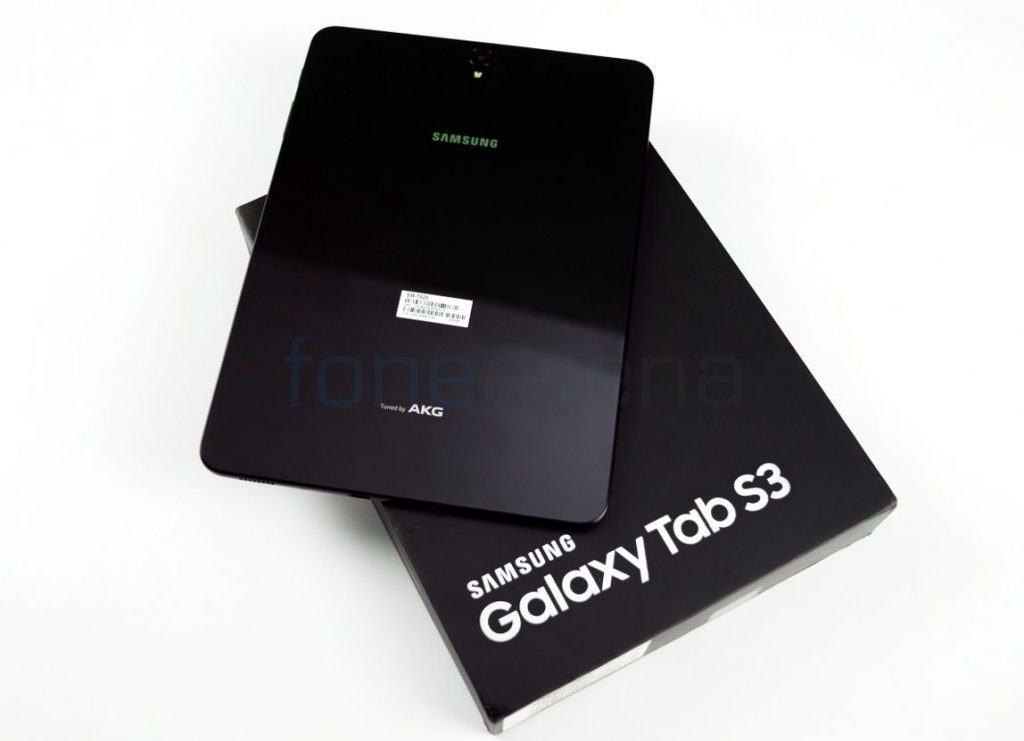 The Samsung Galaxy Tab S3 is indeed the best premium tablet in the Android platform as of now, giving a tough competition to its arch rival Apple’s iPad. This slate has an amazing build quality, good overall performance, decent camera and much improved S-Pen. But on the other side, its pricing is a huge let down as it costs you a bomb, in addition you have to purchase the Keyboard Cover at Rs. 8499. Overall performance is good, but it is hard to recommend it considering the price. If it was priced 10 to 15K lesser, then it would have been bang for the buck.