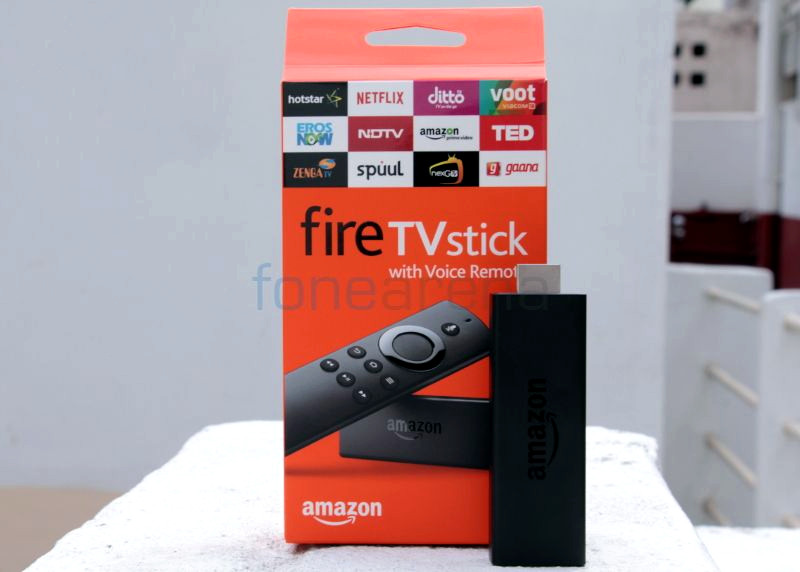 Amazon entered India in mid-2013 and soon became one of the biggest e-commerce players in the market. Last year, the company launched its Prime video subscription service in the country to create ripple in the online streaming market and locked horns with the likes of Netflix and Hotstar. It is pretty clear that Amazon considers India as a potential market and hence has big plans for the country. Following the Prime Video launch last year, Amazon launched its Fire TV Stick with voice remote for Rs. 3999 in India last month.

We have got our hands on the Amazon Fire TV Stick, so let’s take a detailed look at the features and see if this could be your go-to streaming device. 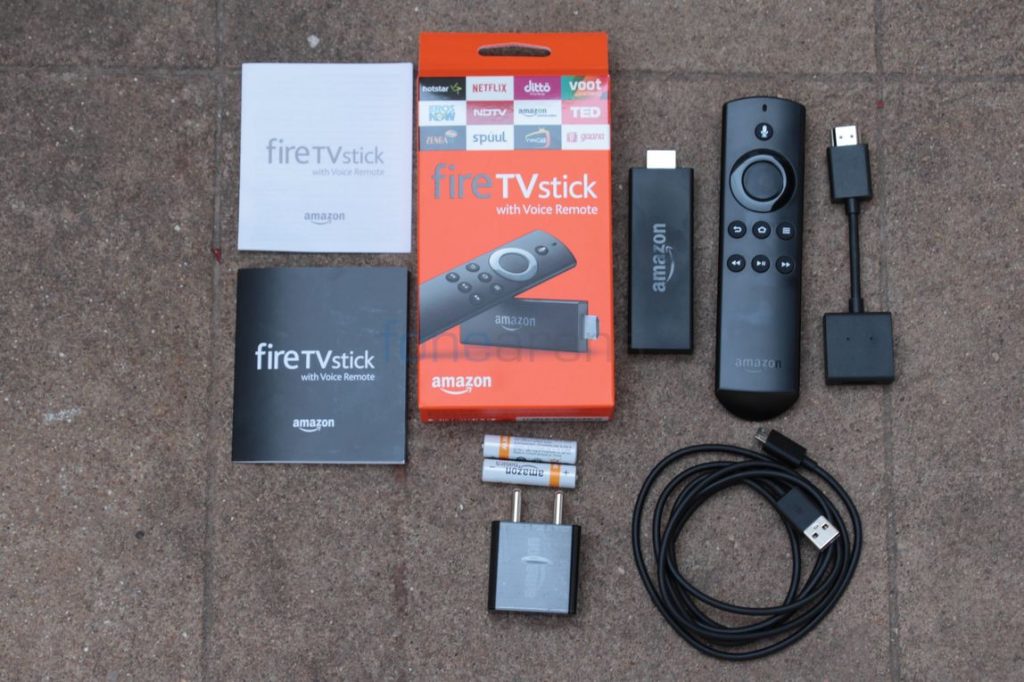 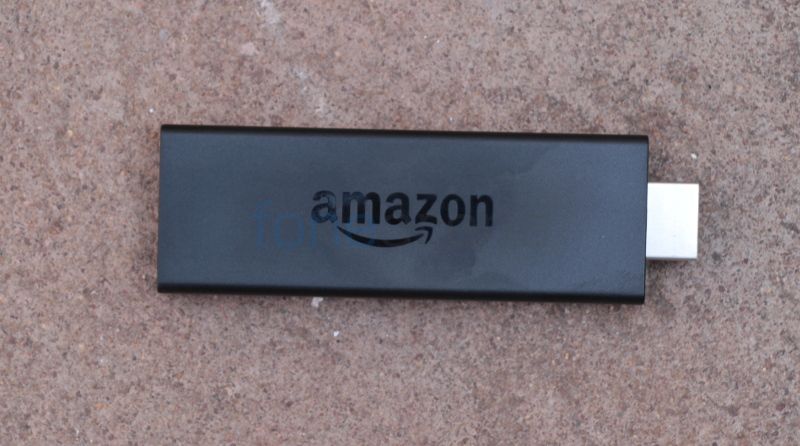 The Amazon Fire TV Stick has a simple design similar to a large USB flash drive. It has a HDMI connector on one end that needs to be plugged into a TV with a HDMI port. The device measures 85.9x 30.0 x 12.6mm and weighs 32 grams.

There is a micro USB port on one of the sides that needs to be connected to the accompanied wall adapter. 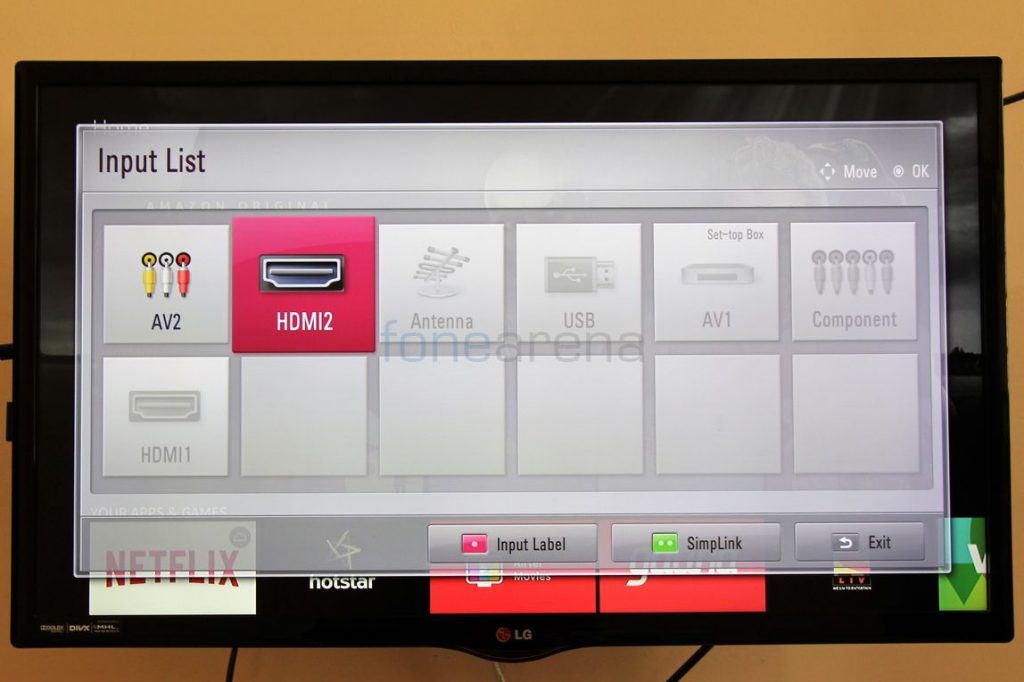 In order to get started, you will have to plug the Fire TV Stick into the HDMI slot on your television and plus the micro USB cable into the stick using the wall adapter to power it on. A minor drawback of this is that the USB cable will remain hanging especially if you have a television that is wall mounted. Amazon also bundles HDMI extender cable if the Fire TV Stick does not plug directly to your TV.

Setting up the Fire TV Stick is pretty simple especially, if you have bought it from Amazon as it will come with the credentials of your account. Another option to set up the device is using the voice remote which is extremely helpful and enhances your streaming experience. 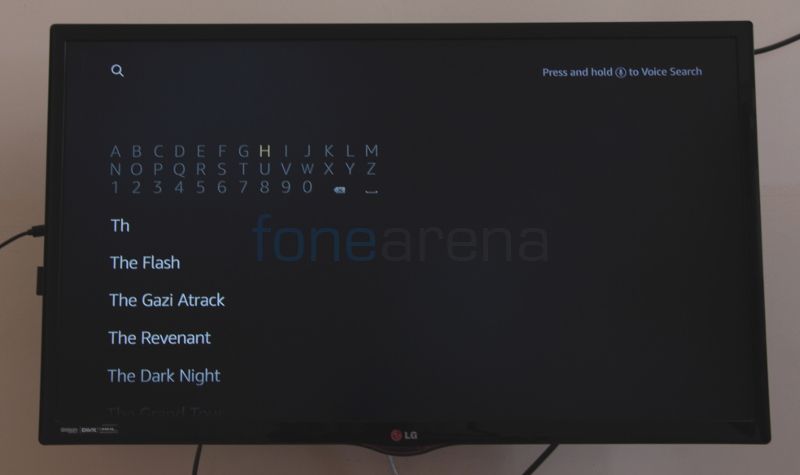 There is a A-Z on-screen keyboard instead of a QWERTY which might be irksome for some users. Also, there is no universal search option, this means you will have to open specific app for example Netflix to watch Stranger Things. As Amazon is offering an array of streaming services, a universal feature should have been quite helpful. However, thanks to the Fire TV remote app available for Android and iOS, you can search, type and browse using your smartphone for easier control. 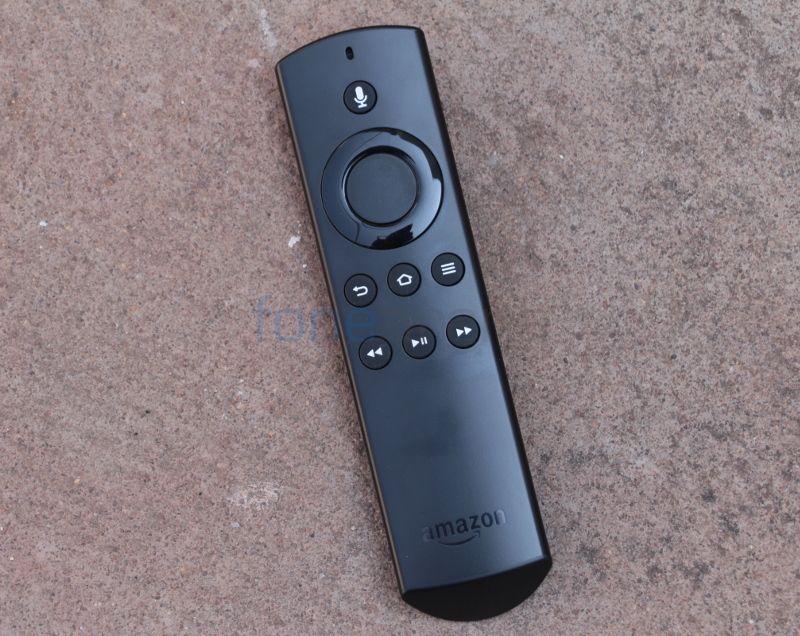 The Voice Remote has a compact and sleek design. Unlike the regular remote, you don’t need to point this voice remote to your TV to browse content thanks to the Bluetooth support. It has a microphone button at the top which lets you use voice commands to search content while streaming the Fire Stick TV. A circular pad at the center lets you navigate while you can click center for selecting or entering menu.

Next up, you have the back, home and options buttons followed by reverse, play/pause and forward button. It is a bummer that the voice remote does not come with volume rockers and you will need your TV’s remote to control the volume. The voice search is accurate most of the time and you can simply speak the name of the title, actor, category into the remote and it will get Amazon results including movies and TV Shows. 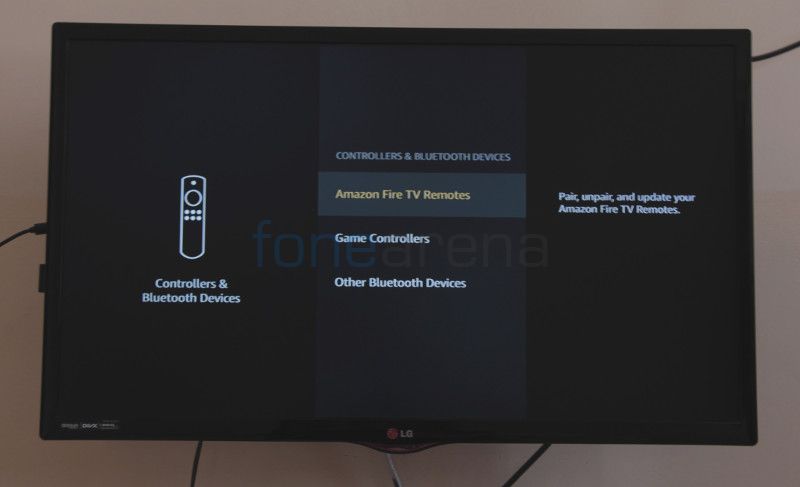 However, the Indian version of the voice remote does not come with Alexa support which limits its use. You cannot give voice commands using the remote to open an app. The US version of Fire TV Stick comes with Alexa and it would be great Amazon could bring it in India soon. 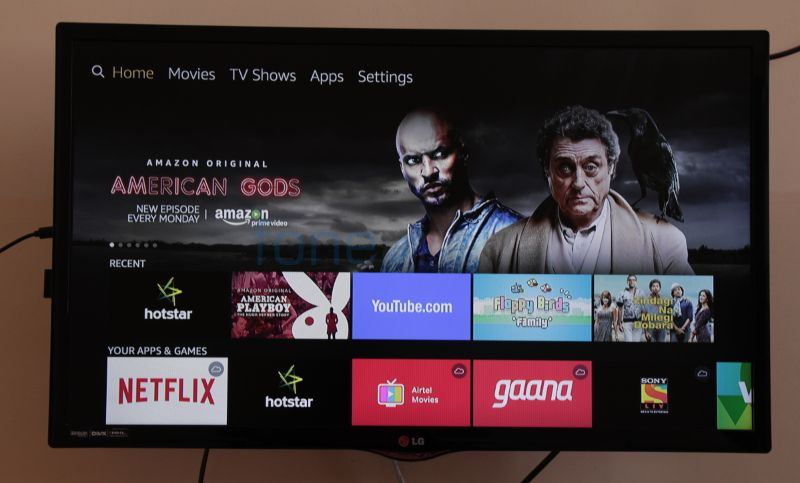 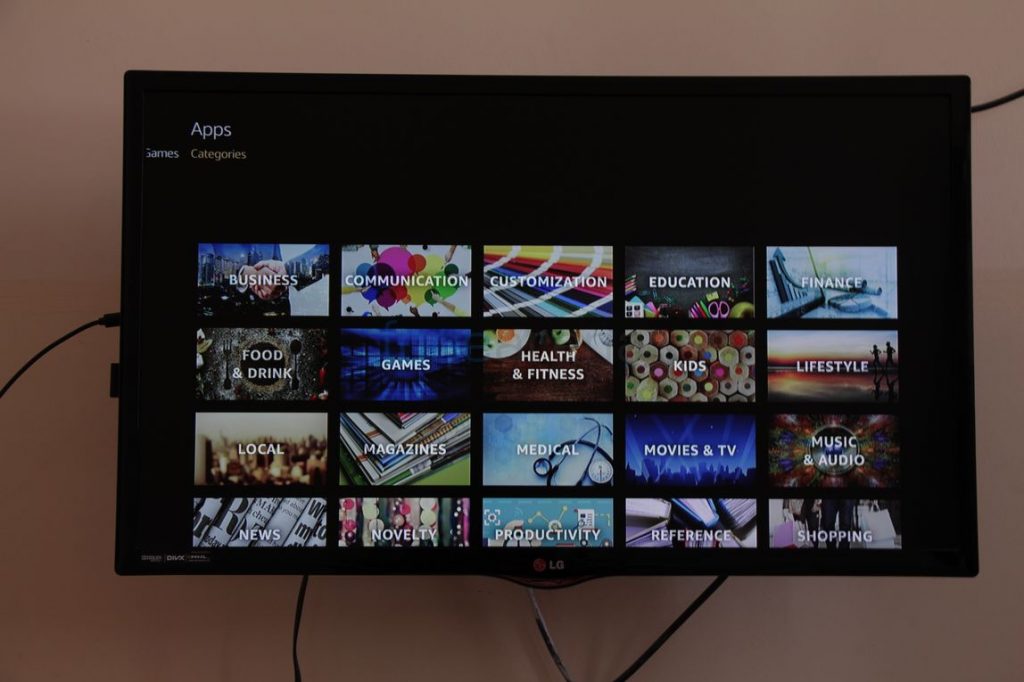 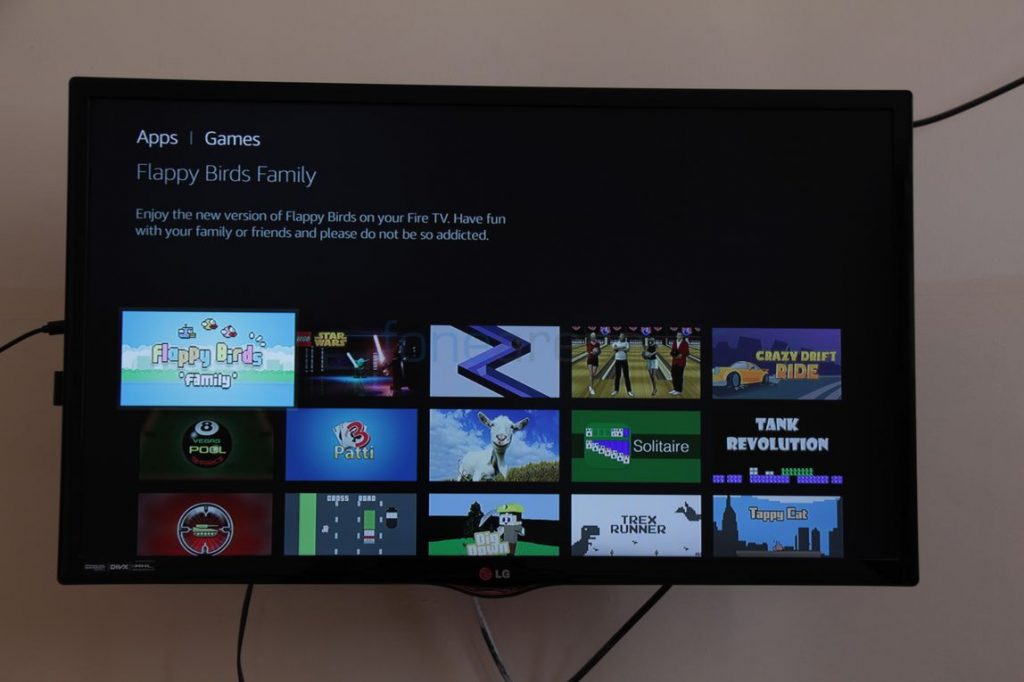 There are several games available in the Amazon Apps Store including Flappy Bird, Lego Star Wars: The New Yoda Chronicles, Solitaire, Teen Patti and FreeCell. You can play these games using the remote but it is not suited for hardcore gaming experience. Another feature included with the device is the ‘X-Ray’ feature that offers trivia about the programme and actors, including which characters are in the current scene and what song names of music played in the show. 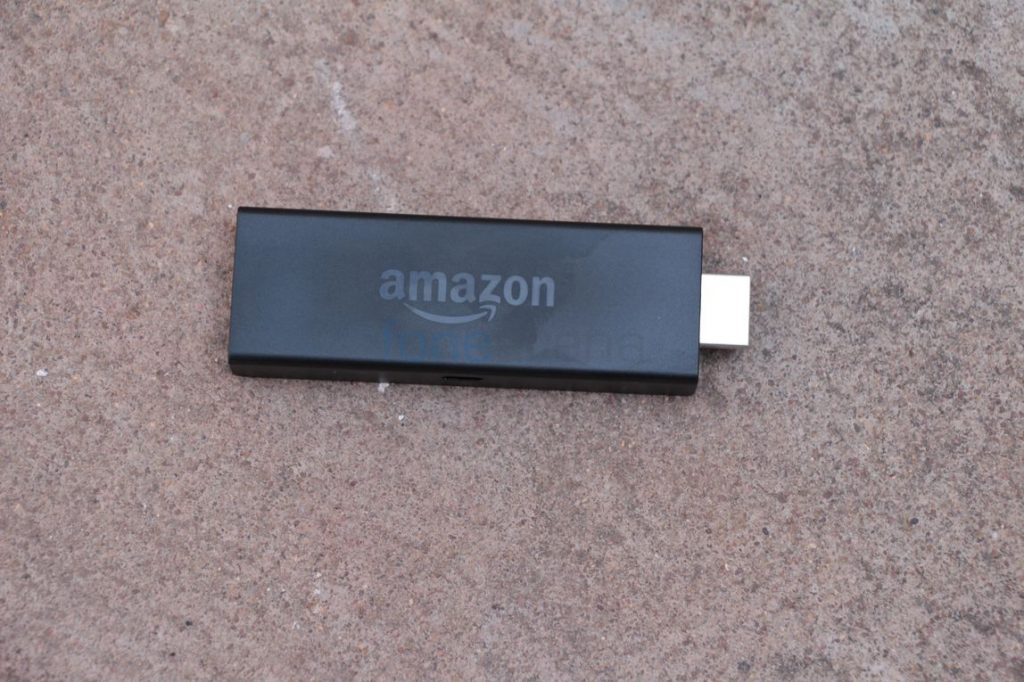 The Fire TV Stick is powered by a 1.3 GHz Quad-core MediaTek processor with Mali450 MP4 GPU. It comes with 1GB RAM, 8GB internal storage. In terms of performance the device is pretty fast and offers a lag free experience. You can quickly scroll through the carousel of apps, go back and forth without any glitches. The Fire OS UI is also decent and makes navigation easy. Connectivity options on the device include dual-band 802.11ac WiFi s 2×2 MIMO and Bluetooth 4.1.

Streaming with Fire TV Stick is smooth especially if you have a decent broadband connection. I was streaming content at 60 Mbps speed that helped me enjoy buffering free content. 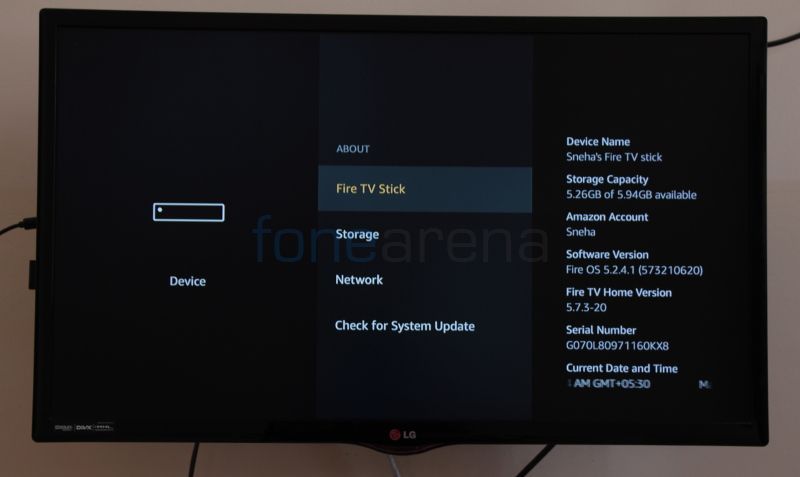 Although it has 8GB internal storage, you only get 5.94GB of available space. You can also cast content to the Fire TV Stick from a smartphone or tablet. 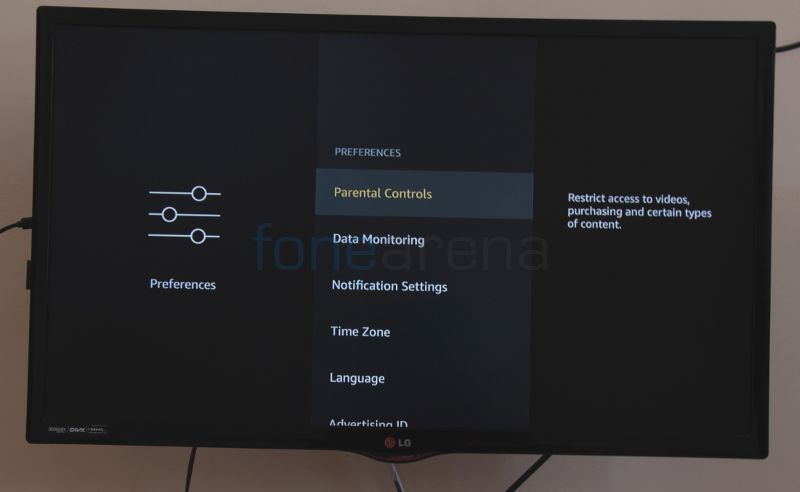 The device also offers parental controls that restricts access to videos and purchasing of content. With the data monitoring setting you can set data limit which you also offer an alert about the data usage. 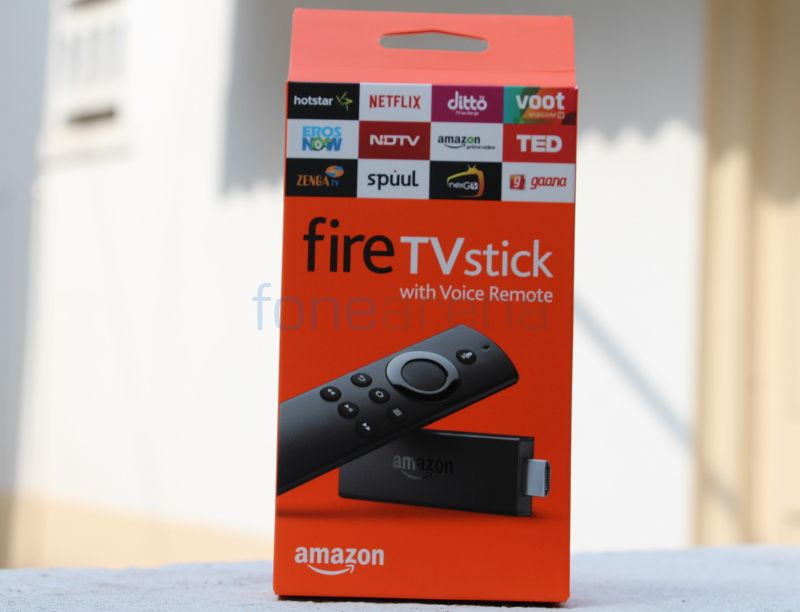 The Amazon Fire TV Stick impresses in terms of performance and content offering. However, Amazon pushes a lot of its own content front and centre. If you are a Prime Video user, buying the Fire TV Stick is a great investment as watching your favourite content on the big screen instead of your phone, tablet or laptop is definitely a better experience. The inclusion of voice remote ups the viewing experience (barring the lack of volume control buttons). Also, the stick supports up to resolutions of 1080p which means you will have to think twice if you are planning to use this with a 4K TV. But, I am not sure if this can be considered as a major game changing factor to not buy the Fire TV Stick.

At a price of Rs. 3,999 Amazon Fire TV Stick is definitely value for money streaming device. Although slightly expensive, the Fire TV Stick is a worthy competitor to the second-generation Chromecast that retails at Rs 3,399. If you are a fan of Prime video, go for this one as you will not be disappointed!

The Amazon Fire TV Stick is available from Amazon.in and comes with several offers and freebies including Rs. 499 Amazon Pay credit if you sign up for an annual Amazon Prime membership, 105 GB free data (35 GB per month for 3 months) for Airtel broadband and 4G home Wi-Fi devices, 240GB free data (80 GB each month for 3 months) for YOU Broadband Customers, Free 3 months of Premium Eros Now Subscription, Ad-Free Streaming on Gaana for 6 months and more.