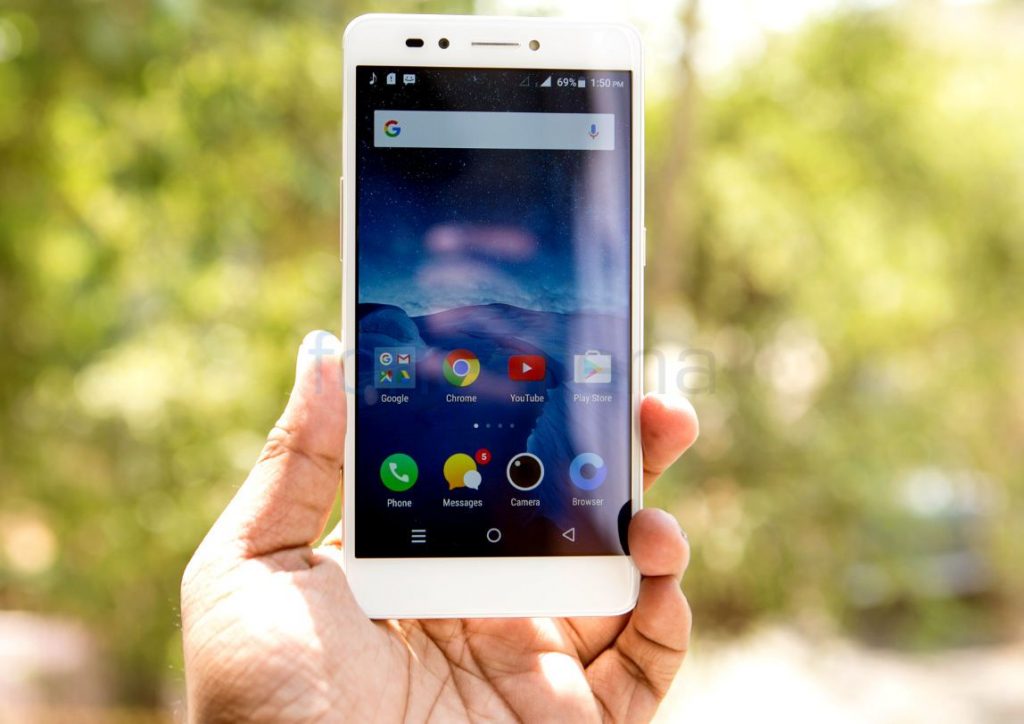 Recently, the desi handset maker Lava launched a brand-new smartphone listed under mid-ranger, dubbed as Z25 in India at Rs. 18,000. Available in Champagne Gold and Grey colors, the phone is available in select retail stores across Indian market. 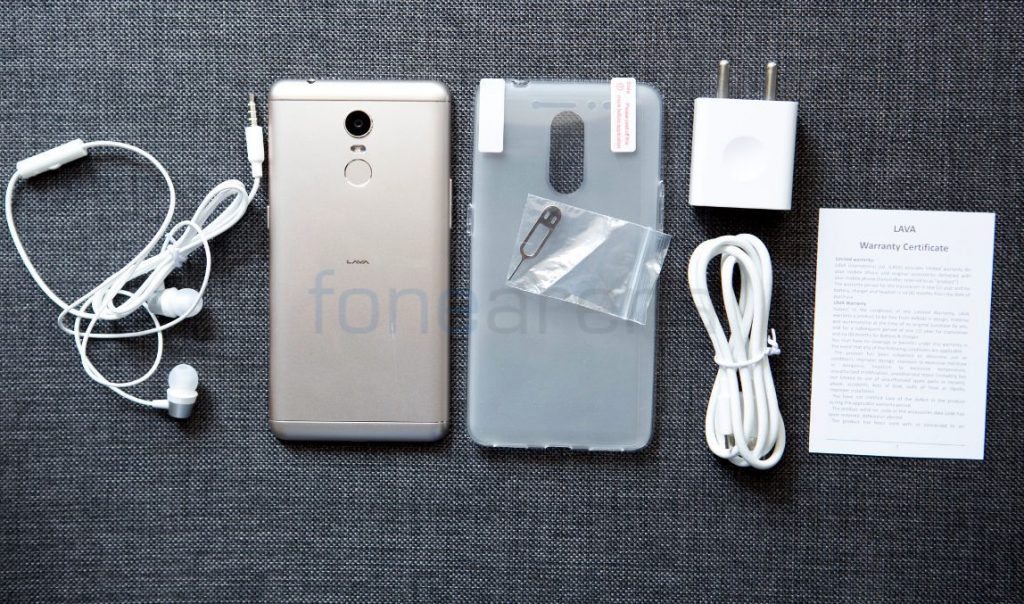 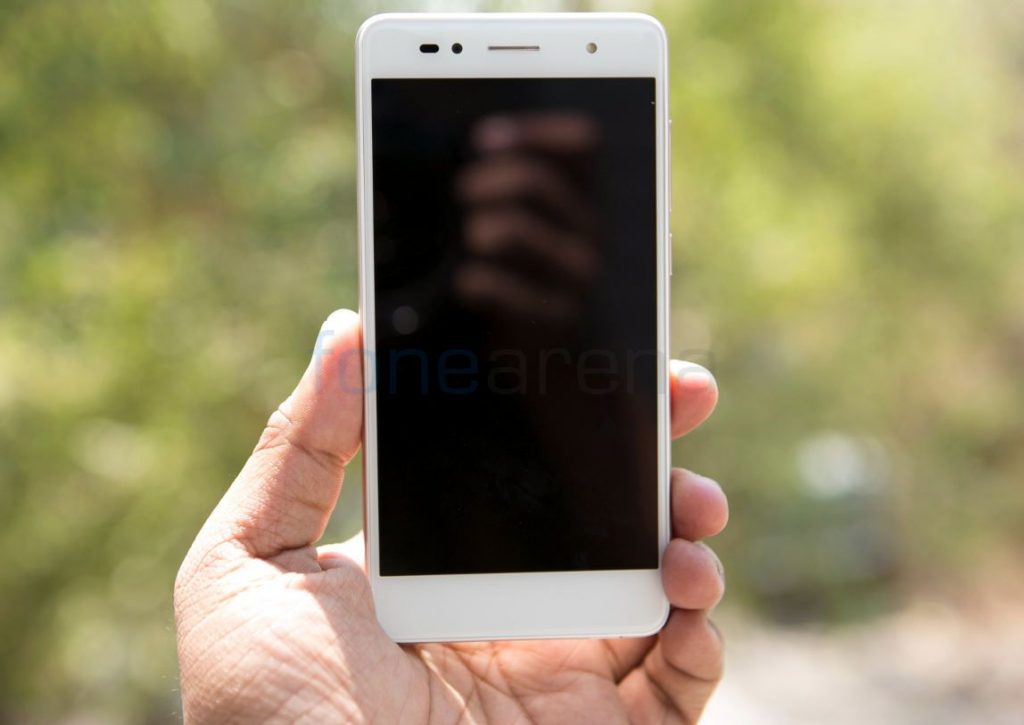 The Lava Z25 sports a 5.5-inch HD IPS display with a resolution of 1280 x 720 pixels and also it has a 2.5D curved glass giving it a polished premium look. The display is bright, vibrant and has a good reproduction of colors. The sunlight readability is decent as well. Since the display is glossy it attracts fingerprints.

The smartphone also come with one-time mobile screen replacement for a year and also come with a ’30 Day Replacement Policy’ where consumers will get a replacement with a new device in case of any hardware damage within a span of 30 days of purchase. 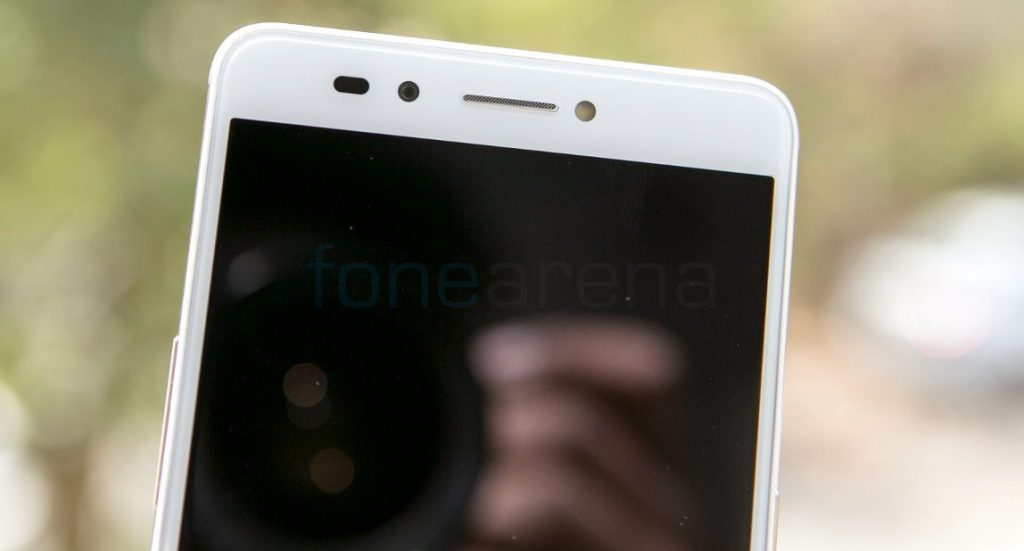 Talking about the design, the Lava Z25 comes in metal unibody design measuring 151.5×76.4×8.5mm and weighs around 163 grams. In terms of hardware, the mid-ranger comes with an 8MP front camera, LED flash, ear piece, and a usual set of proximity and ambient light sensors are present next to it. Just next to LED flash, there is a tiny notification LED light as well on the front.

Just below the display, there is an empty space where Lava could have implemented physical/capacitive button. 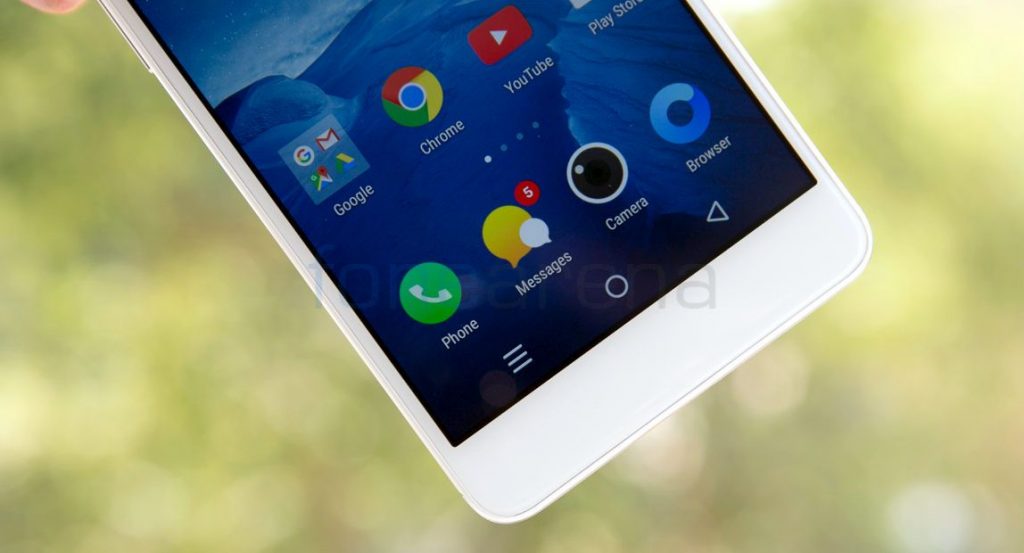 As this phone just has an on-screen button, the big bezel at the bottom looks so empty and awkward. Talking about the placements, the left side of the phone houses a volume rocker button, on the right we have Hybrid SIM slot (Nano + Nano/MicroSD) and power button as well. 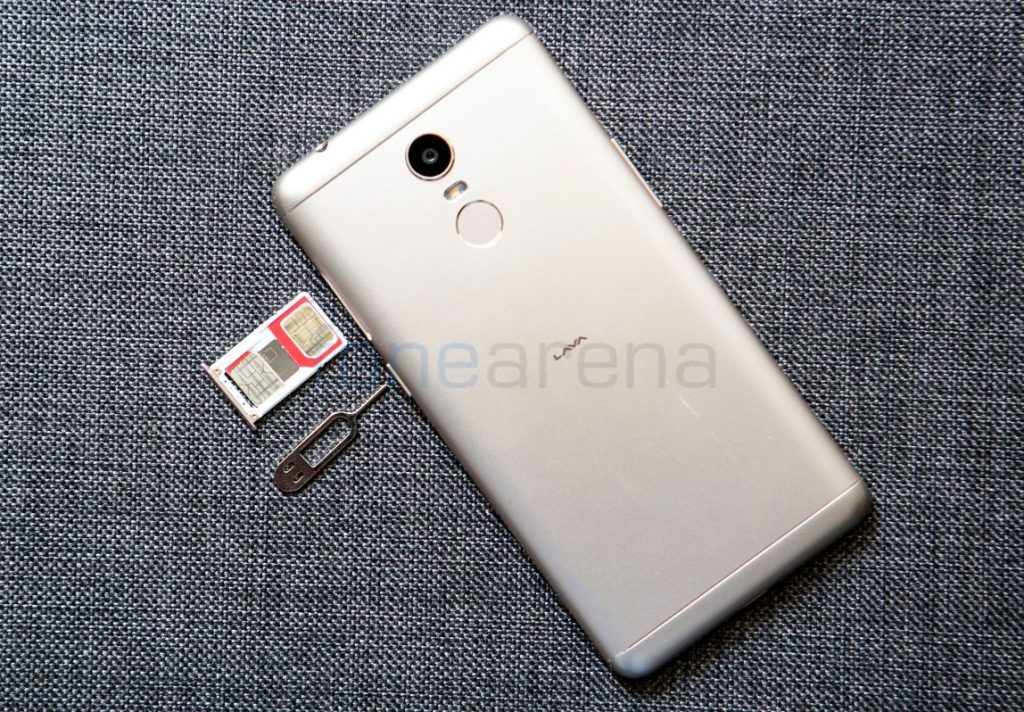 Well, my experience with SIM tray is not sweet, as I tried so hard to get it removed. Till now, I am not sure whether the fault is with our handset or it is in general. At the bottom, there are two grills on either side of the micro USB port and there is a 3.5mm audio jack on the top.

Moving on to the back, there is a 13MP rear camera, LED flash and a circular fingerprint scanner sitting below each other. In terms of design, the Lava Z25 looks like an blend of Honor 6x (front) and Redmi Note 3 (back) with a metal unibody design. 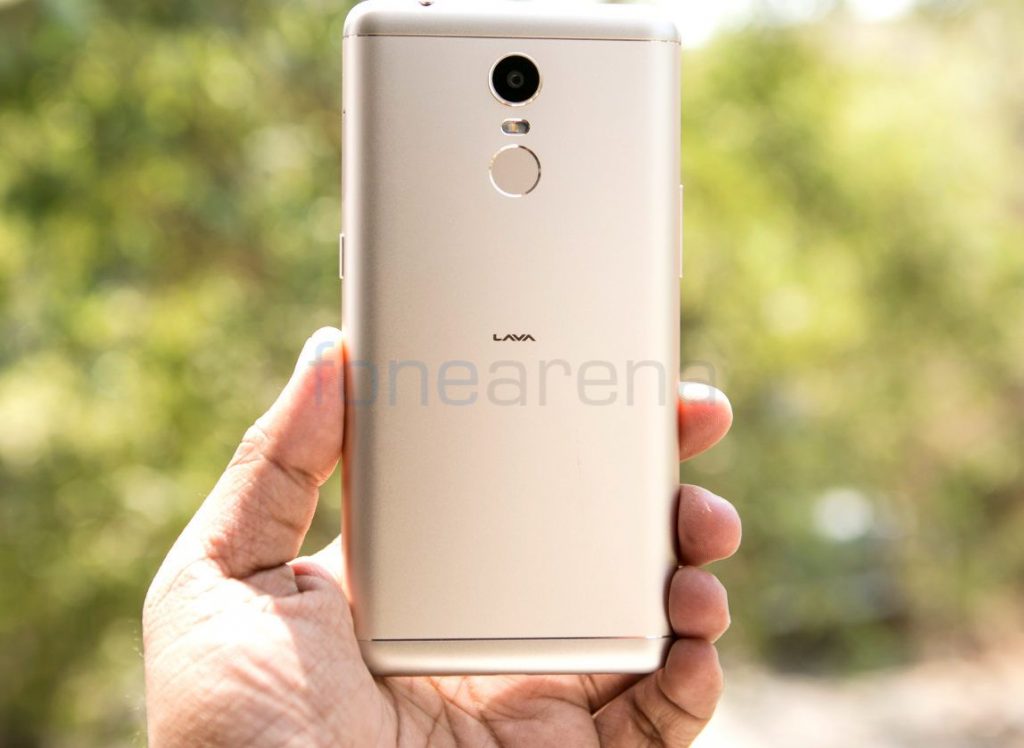 The phone looks sturdy, premium and feels good to hold as well. In case if you are lying and interacting with the phone in any way, there are chances that it might slip as it lacks good grip on sides. Overall, the build quality of the smartphone is up to the mark for a mid-range version. 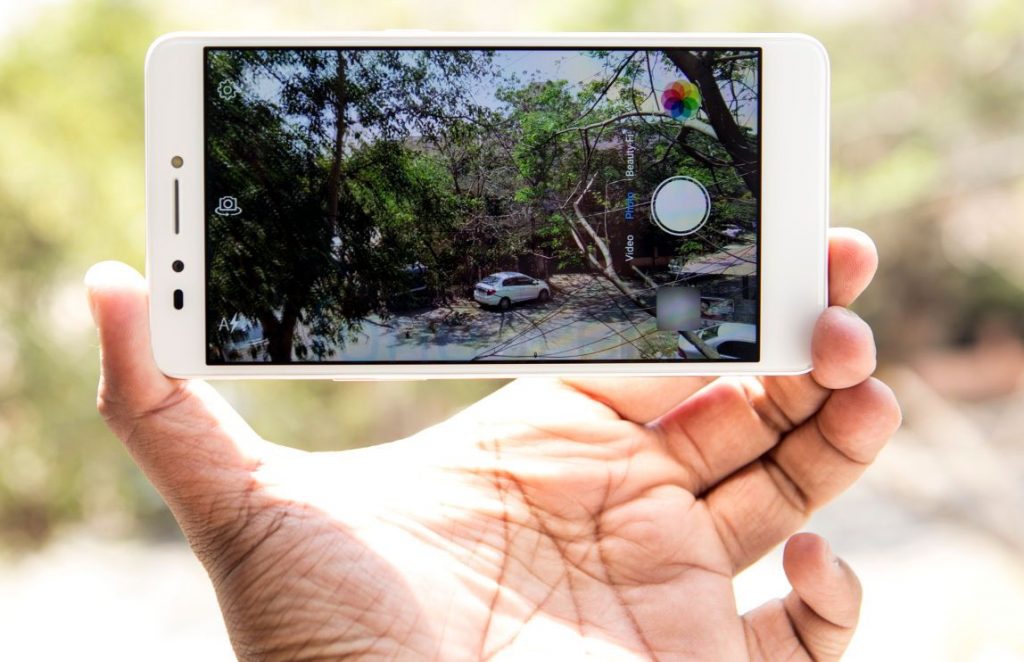 The Lava Z25 sports a 13MP camera on the back with LED Flash, PDAF, f/2.0 aperture, and Sony IMX258 Exmor RS sensor under the hood. The UI of the camera is pretty neat and simple without cramming too much of functionalities. It has a toggle for flash, front/rear camera, gallery, shutter button, and several camera functions including (Extreme beauty, Night Pro, Bokeh, Filter, Gif Mode, Intelligent Mode, Panorama, HDR, Template and much more.)

Coming to the image quality, the daylight shots are good in most of the conditions, HDR shots are good too. The Lava Z25 camera succumbs under the low light conditions as it produces the image with more noise visibility. The front facing camera is good too for selfies and the images are sharp and crisp. Check out some of the samples below (Click the image for full resolution sample). 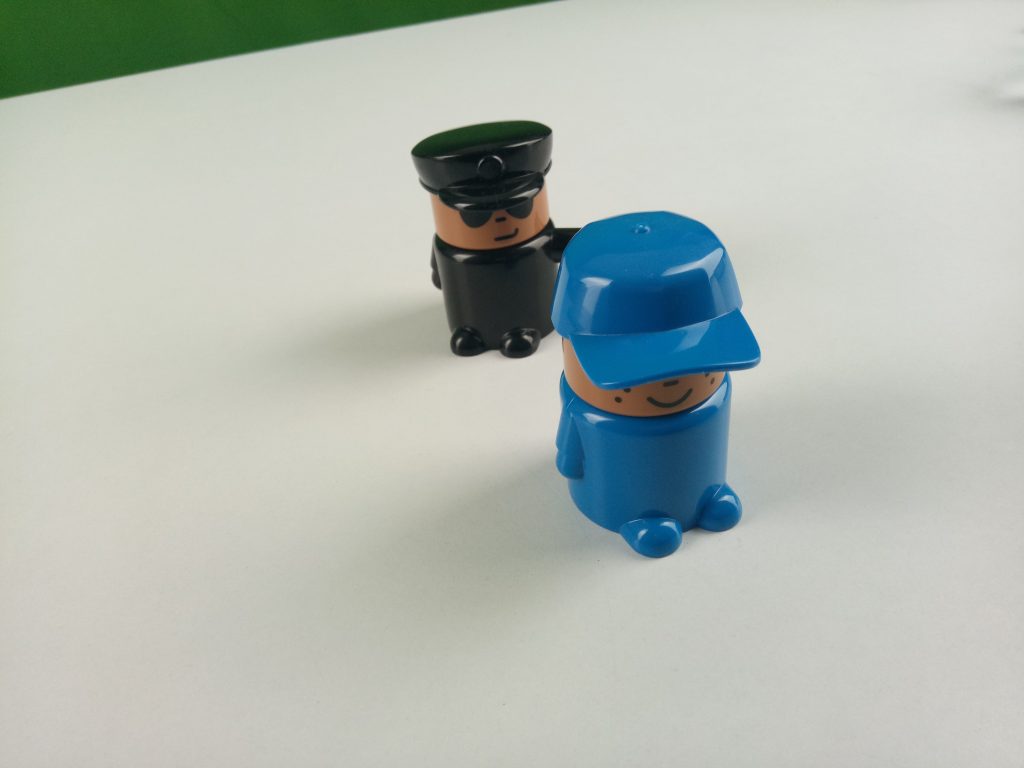 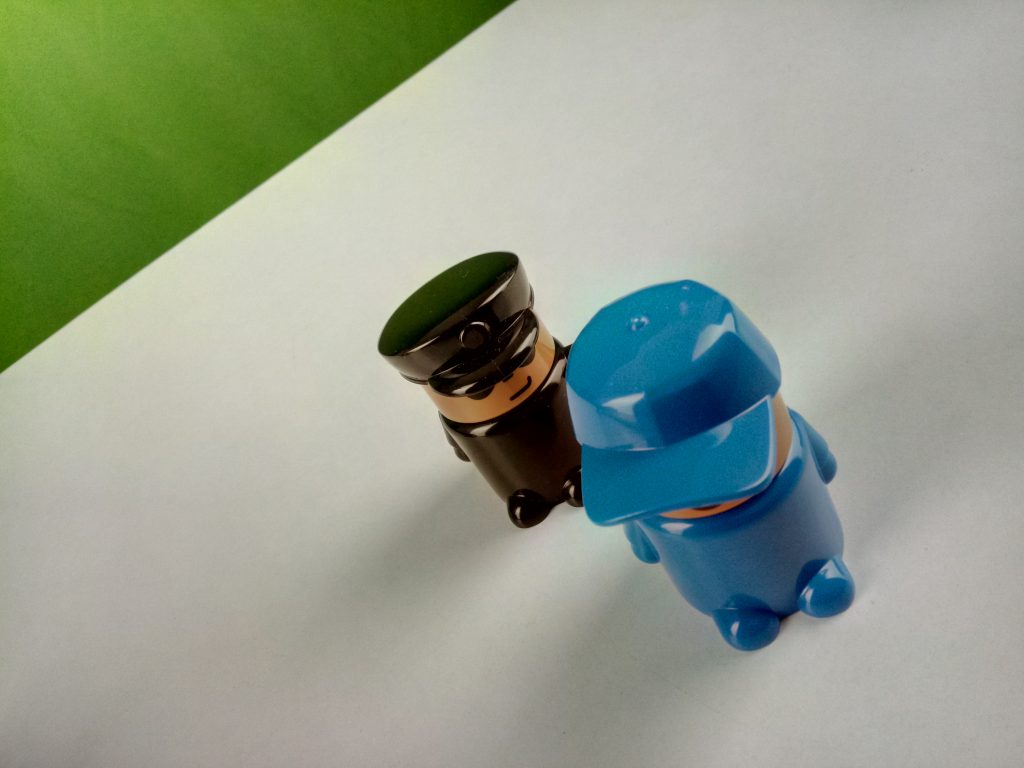 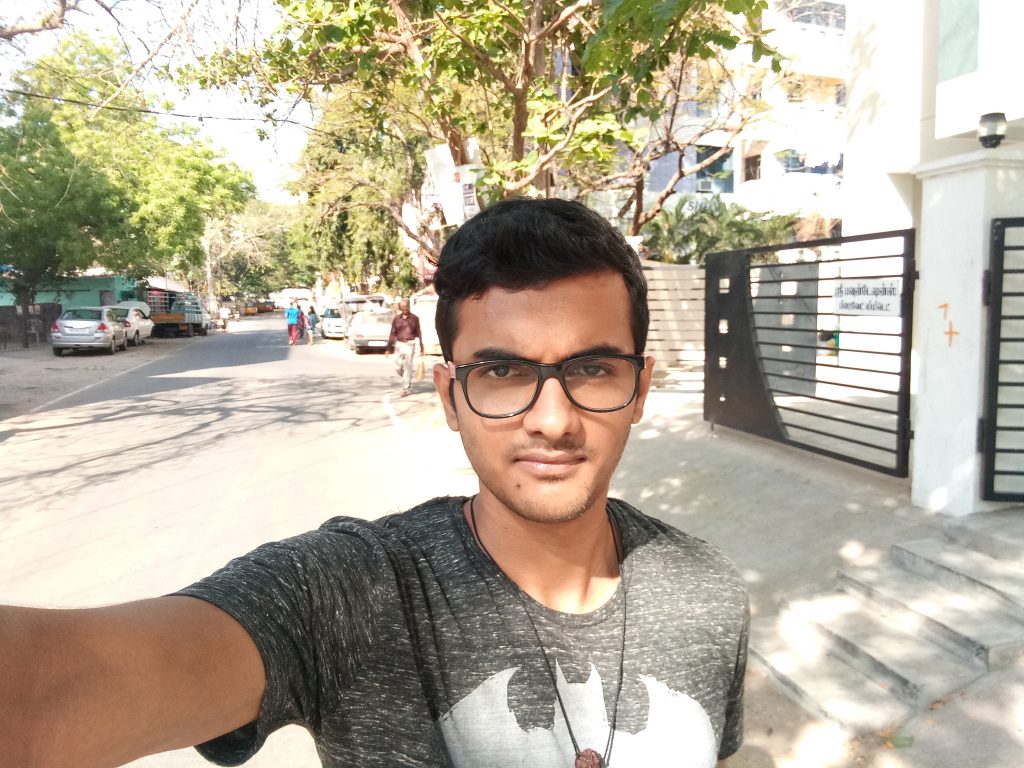 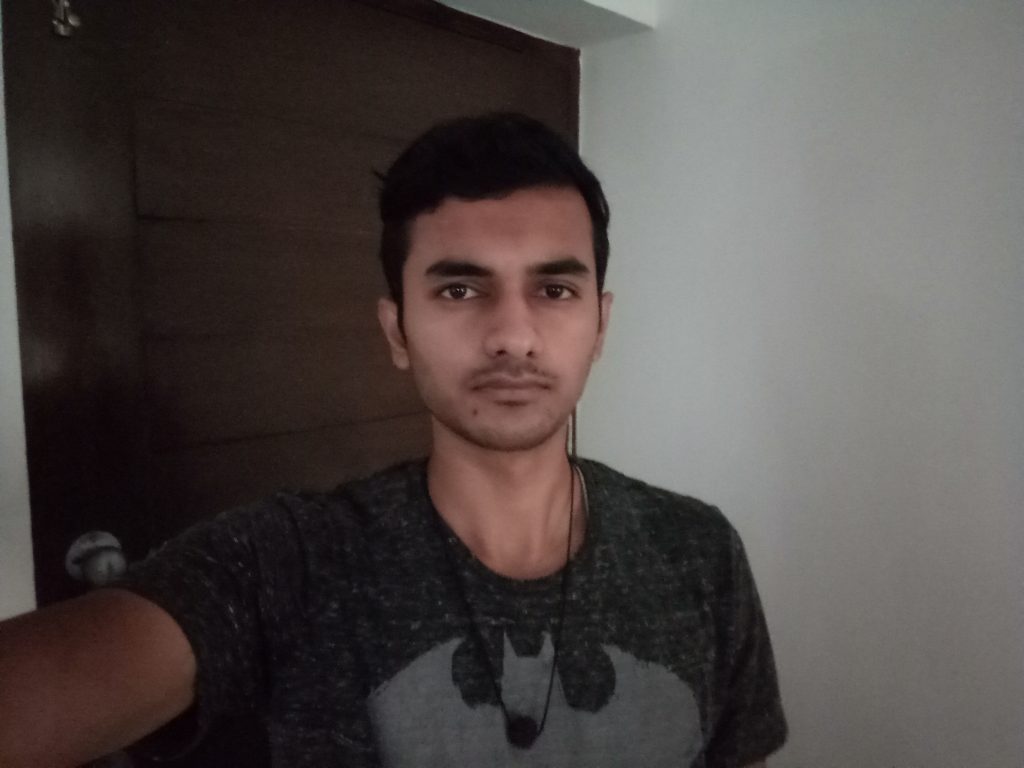 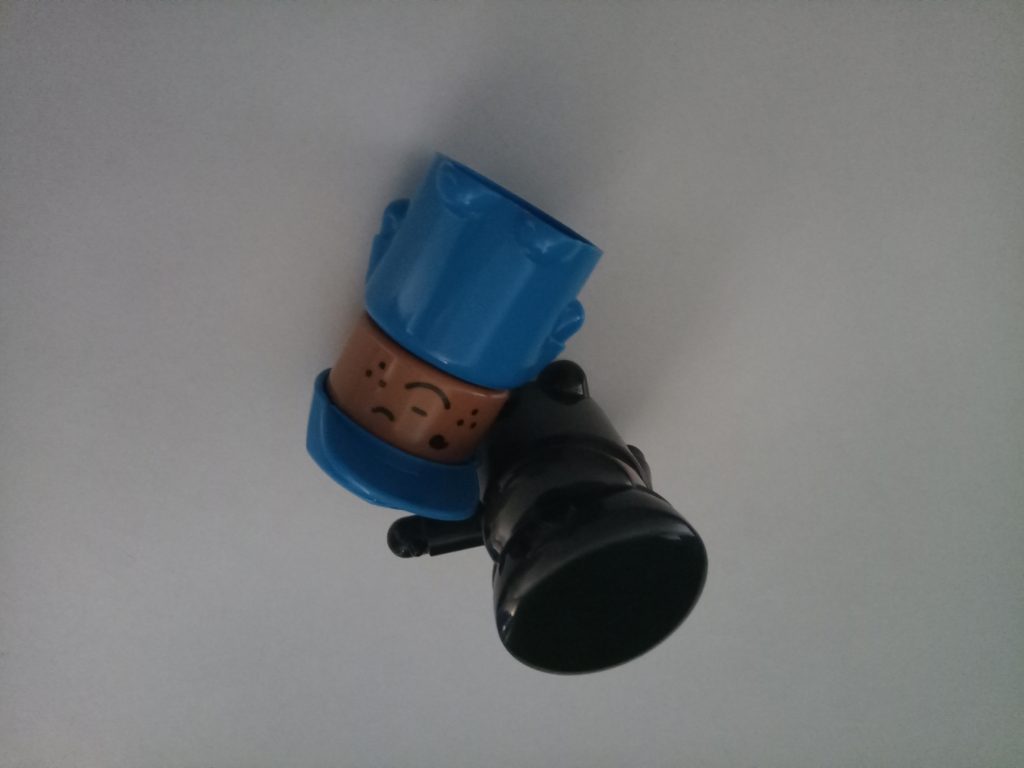 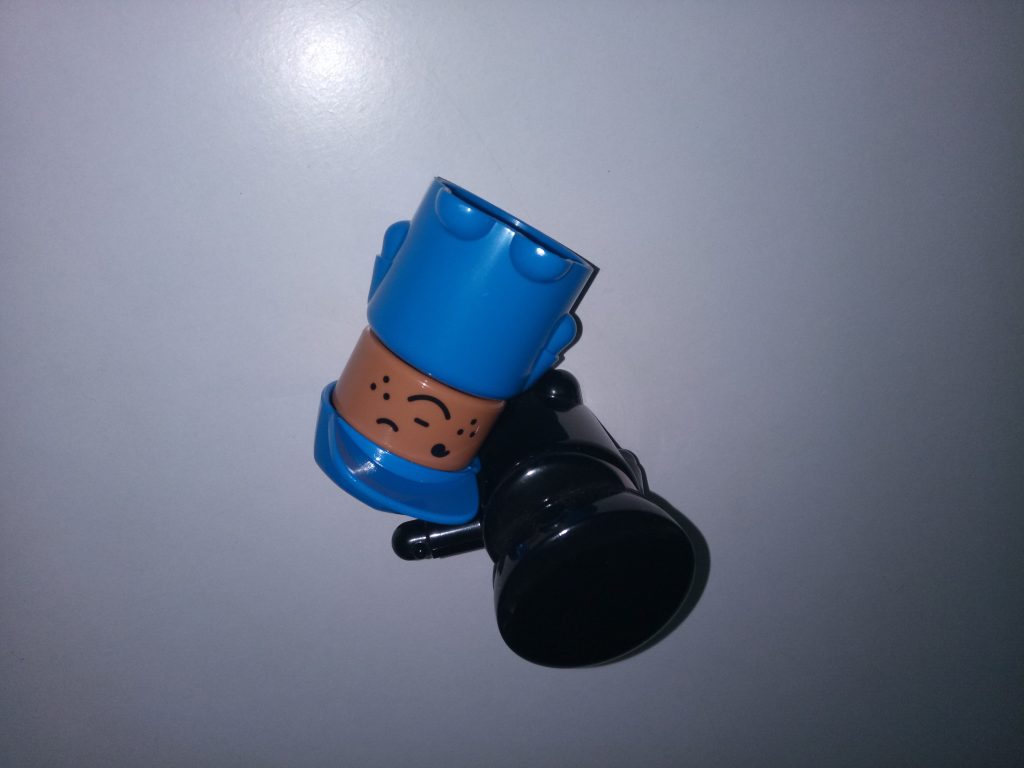 In terms of software, the Lava Z25 runs on Android 6.0 Marshmallow on top of Lava’s own StarOS v3.3. Having said that, there is no announcement regarding Android 7.0 Nougat update from the company. You can launch camera and Google Assistance from the lock screen itself. The drop-down notification bar has several toggles along with a brightness slider as well.

Under the settings, it has Gesture feature where it lets the users open app, wake up using motion gesture. Users can choose whether or not to display the battery percentage. Also, they can choose from two combinations of navigation buttons from the settings as well. Apart from the usual set of utility apps and Google Apps, the smartphone comes pre-installed with Hike, Gaana, Paytm, Jio apps, UC Browsers, News Point and BeautyPlus Me. 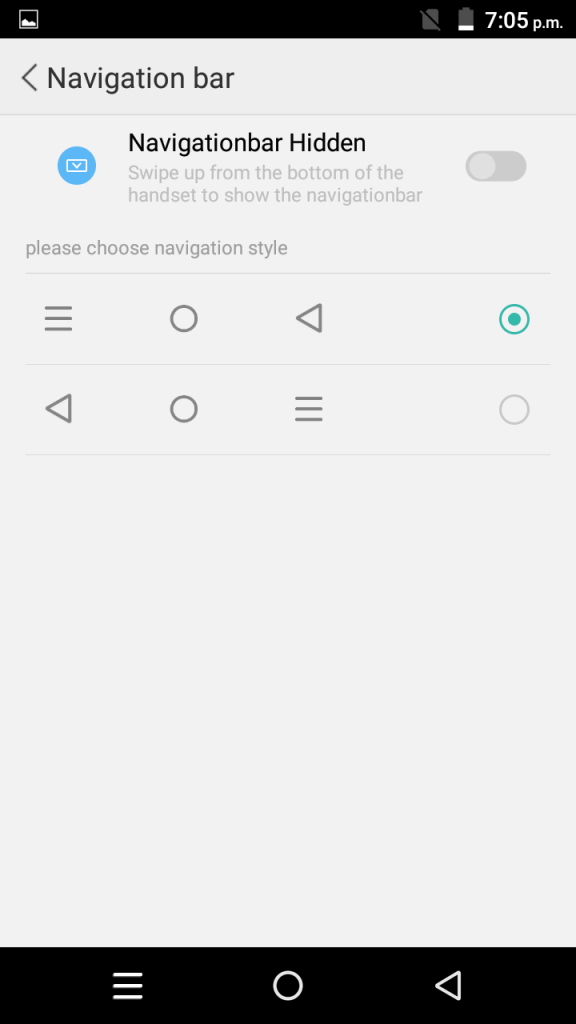 Out of 4GB RAM, user will get around 2.1GB of free RAM when the default apps are running in the background. And on the storage, out of 32GB, users will get 23.86GB free out of the box. In addition, users can also expand the storage up to 128GB through microSD card slot. 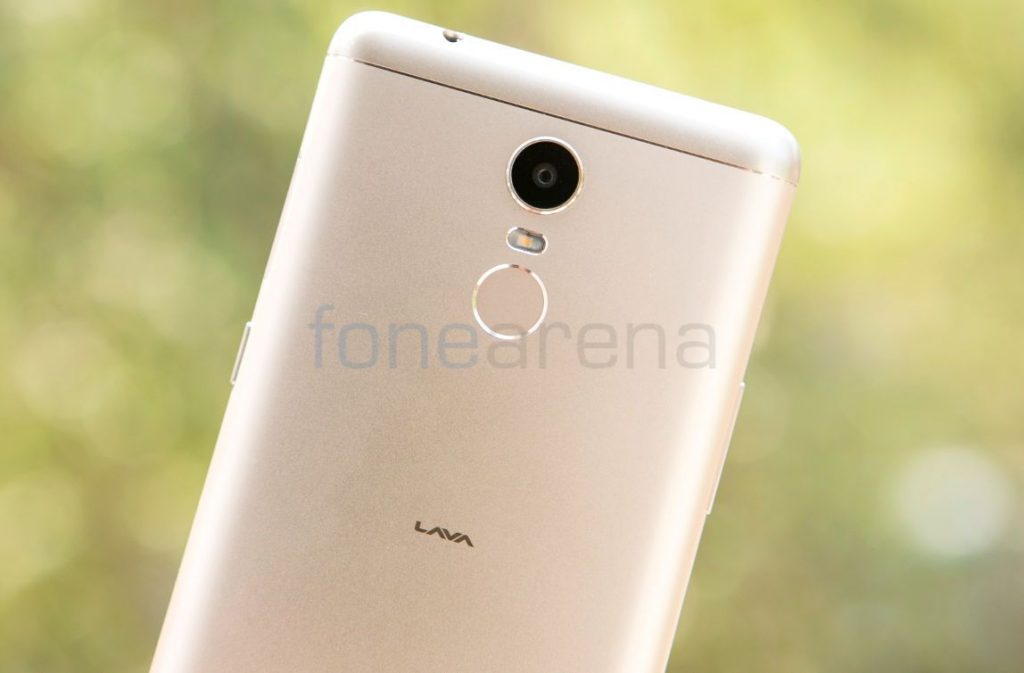 This phone has a fingerprint sensor built into the back. It is quick to unlock the phone immediately you place your finger on the sensor and also unlocks the screen. You can add up to 5 fingerprints. If enabled, you can also click selfies when tapped on the sensors. Moreover, there is a feature to enable App encryption as well using the fingerprint scanner. 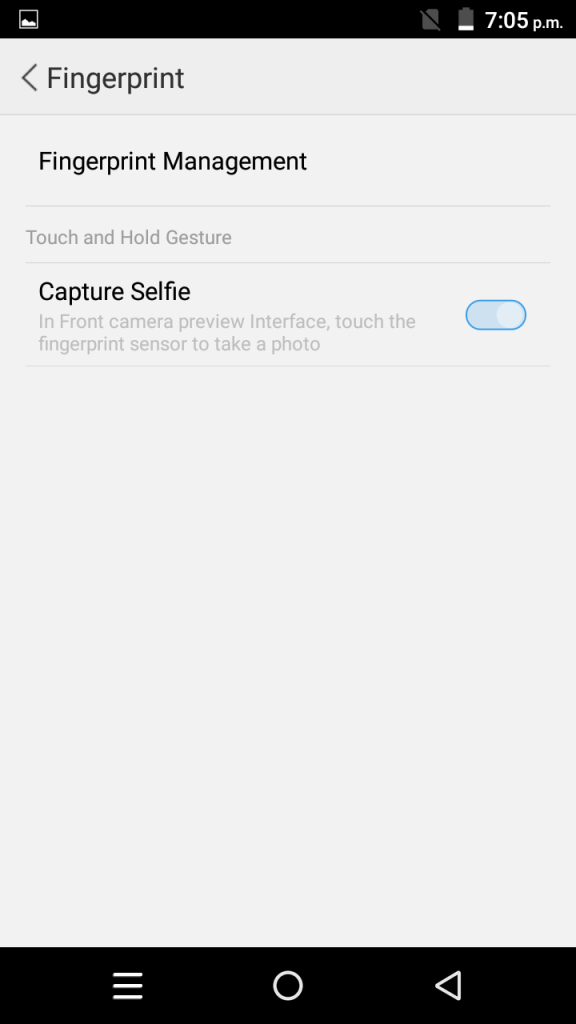 It has the usual set of connectivity features such as Wi-Fi 802.11 b/g/n, Bluetooth 4.0 and GPS. It has 4G connectivity and also has VoLTE that support Reliance Jio as well. Having said that, both the SIM slots support 4G connections, but you can use 4G on only one SIM at a time and other goes to 2G.

The Lava Z25 is powered by an Octa-Core MediaTek MT6750 64-bit processor clocked at 1.5 GHz with Mali T860 taking care of graphics department. The performance of the phone is smooth as butter without any lags and handles all the apps that we throw at it. The Mali T860 GPU offers very good gaming performance without any frame drops as well.

Having said that, there are lots of software bugs that will irritate you at times when you are watching videos (mostly) and Internet browsing. That’s one of the major issues which I hate the most. Besides, the phone is pretty good to use as well. Check out some synthetic benchmark scores below. 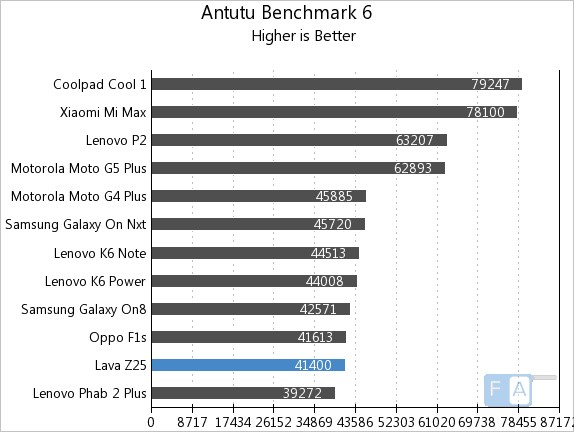 It managed to score 41400 points in the AnTuTu 6 benchmark. 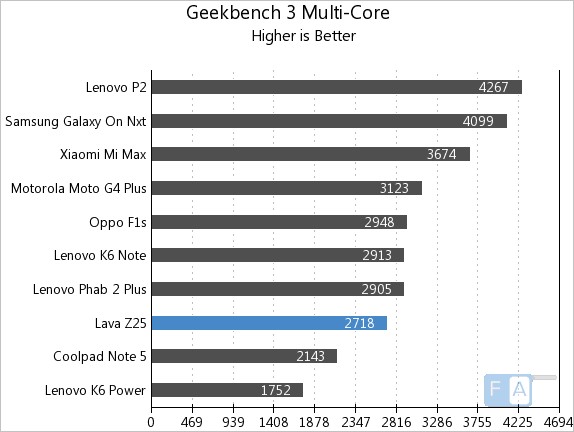 It managed to score 2718 points in the Geekbench 3 Multi-Core benchmark. 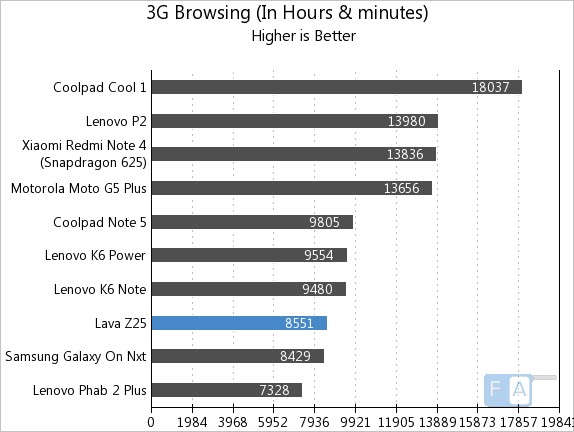 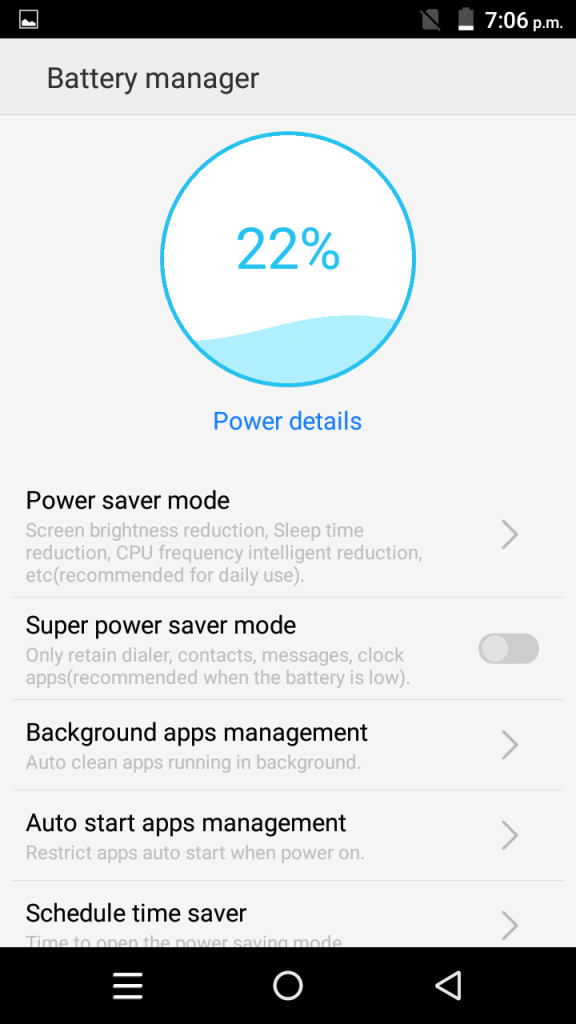 Coming to the battery department, the Lava Z25 is juiced with 3020mAh battery under the hood. The battery life was decent as it lasted for a day with heavy usage as 4G, gaming, video playback and video recording. It has Power saving and Super power saving mode. During the Power saving mode, the screen brightness, sleep time, CPU frequency is reduced, whereas, in Super Power Saver mode, only dialer, contacts, messages and clock app works. As it doesn’t have the fast charging technology, it takes solid two hours for charging from 0 to 100%.

Overall, the Lava Z25 is a good contender under mid-ranger tag in terms of specifications and performance aspect. But when it comes to pricing, the Lava Z25 just vanishes out as it comes with a huge price tag of Rs. 18,000, which cannot be justified. Considering its hardware, camera performance, and buggy software, the Lava Z25 is hard to recommend amidst other smartphones available at the similar range, including Moto G5 Plus, Xiaomi Redmi Note 4, Lenovo P2 and much more that offer a better package and value for money compared to Lava’s mid-ranger.