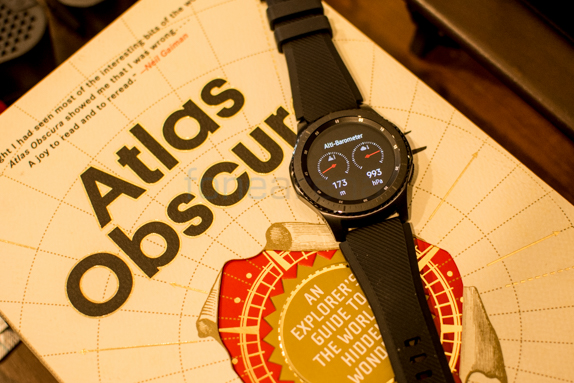 Depending on who you speak to, wearables and in particular smartwatches are a failed category. The pace of fresh launches has slowed down to a trickle and smartwatches just haven’t quite caught the market by storm the way they were expected to. An over-dependence on a paired phone, little use beyond notifications has made these a tough sell. That said, Samsung’s Gear series of Tizen based smartwatches have consistently pushed the envelope in terms of capabilities. We found last year’s Gear S2 to be a surprisingly good smartwatch with some great ideas. With the Gear S3, the company is kicking things up a notch in terms of design and capabilities. Here’s our review of the Samsung Gear S3 Frontier.

Fact of the matter is that most of the competitors in the smartwatch space look like electronic devices really trying to emulate the look of a classic watch. The Samsung Gear S3 Frontier tries to upend this design approach to a degree by taking cues from a classic watch and then building in smart electronics. 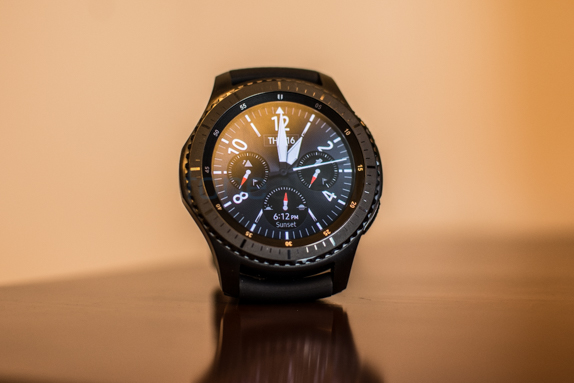 Look closely and you’ll observe similarities with the Omega Speedmaster and the Seiko Astron. Small touches like the way that glare is emulated in the software of the watch-face makes the illusion that much more realistic. This is a big watch that is built to match the size.  The chunky smartwatch is surrounded by a rotating bezel in the style of popular dive watches. Of course, this isn’t just an aesthetic addition. The rotating bezel serves as a primary method to navigate the interface and in addition to the touchscreen, it offers perhaps the best smartwatch navigation experience we’ve come across so far. 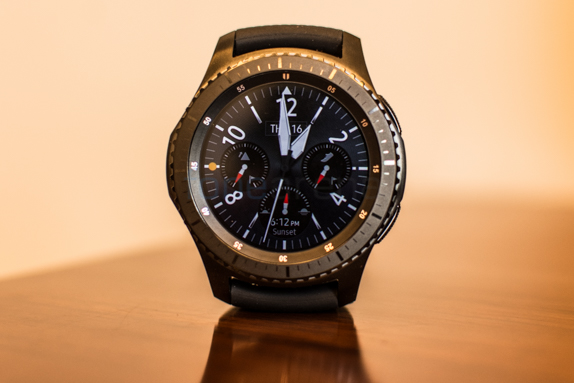 The front of the watch incorporates a 1.3 inch Super AMOLED display. A bezel around the screen marks the time in five minute increments. Paired with a traditional watchface, the front of the Gear S3 remarkably resembles a chunky analogue watch. The bright display is covered with a Gorilla Glass SR+ layer that should ideally protect it from scratches. The raised bezel of course further prevents the screen from ever touching a surface. The resolution of the display on offer is 360 x 360 pixels which results in a pixel density of 278 ppi. A wearable is invariably going to be used outdoors and brightness levels are a very important facet, more so in the case of the Frontier that is meant to be used out and about.

The display goes as bright as 1000 nits, matching the Apple Watch Series 2 and is exceptionally visible even under a bright scorching sun. We would’ve preferred a slightly lower minimum level of brightness since in a darkened room, it can appear still too bright. An ambient light sensor is built into the display itself which takes away the effort needed to adjust the display brightness to an optimum level. The Gear S3 Frontier has an always on device mode which displays the regular watch face instead of a pared down AMOLED optimised watch face.

Further on, like we mentioned earlier, there’s a knurled rotating dial around the bezel. Not only does it look really good but it serves as a method to get around the interface. As you’ll notice in the following sections, the entire interface is arranged in the form of circles lined up around the edge of the display. There’s a distinct tactile click as you twist the bezel around to select apps or scroll through widgets. A tap on the screen will get you into the app. The body of the watch is made of Its 316L stainless steel which makes it feels particularly luxurious. The 46mm case on the other hand will prove to be rather large for a lot of users which is why i suppose, Samsung decided to develop the Gear S3 Classic alongside. The right side of the case includes two buttons with a rubberised grip on top. The buttons correspond to back and home. A small microphone can be spotted here.  Over on the left side is the speaker grille which lets you take phone calls directly from your wrist. The underside of the watch is where the heart rate sensor lies next to an atmospheric pressure sensor. 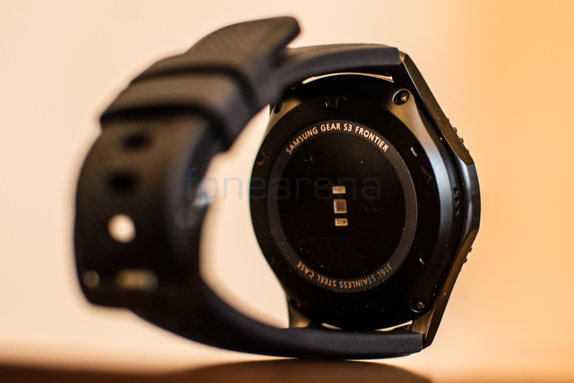 We’ve already mentioned that the Gear S3 Frontier has a 46mm case. To be specific, the dimensions of the watch measure 46 x 49 x 12.9mm. The watch weighs 62 grams without a watch band which is slightly weighty and you’ll probably want to take it off while going to bed. The Gear S3 Frontier corresponds to the MIL-STD-810G and IP68 spec making it both water and dust proof. The Gear S3 Frontier also includes built in GPS which is put to good use by the fitness apps onboard. The good thing this time around is that the Gear S3 supports standard 22mm watch bands so you can go and switch out the included band with any that you prefer.

Let’s get the performance part of the equation out first. The Gear S3 is powered by a 1Ghz Dual Core processor. It has 768 MB of built-in RAM and 4GB of storage that can be used to install apps and store music. These specs are par for the course for wearables and performance is never an issue. The storage too might seem less but unless you plan to store music on the Gear S3, it is more than sufficient since watch apps tend to be very small in size.

Moving on to the software, the watch runs on Tizen 2.3.2.1 which is a very different take on a smartwatch OS compared to Android Wear. Where Android Wear relies on swipes and gestures, needs a constant connection to a smartphone to be of any use, the Gear S3 can run apps including rudimentary games without any active connection whatsoever.

You can install more apps on the watch using the Gear app which also offers a more convenient way to manage all the settings and watchfaces on your Gear S3.

Preinstalled apps on the phone include:

Most of the apps here are self-explanatory. You can use the dialer app to make phone calls over the bluetooth connection to your phone. The calls can then be continued over the speaker and microphone combo built into the watch itself.

Most of the included apps come with widgets that show important information at a glance. Rotating the bezel to the right lets you scroll through all the widgets on your watch while scrolling to the left reveals the latest notifications.

The companion app for the Samsung Gear S3 gives you access to a whole host of information about the watch itself. Additionally, it lets you manipulate and adjust practically every setting on the watch. From the watch-face to granular notifications, content on the watch itself and much more, all of this can be manipulated through the app interface that makes it much easier than fiddling around on the smaller screen.

The Gear S3 is quite well endowed when it comes to connectivity options. There’s onboard WiFi 802.11 b/g/n, Bluetooth 4.2, NFC, A-GPS/GLONASS and Magnetic Secure Transmission to enable Samsung Pay. As mentioned earlier on in the review, there’s an atmospheric pressure & barometer sensor over at the back next to the heart rate monitor. The sensors work well to calculate your altitude above sea-level as well as the barometric pressure. While not absolutely essential, the added data might be of use to those who spend a lot of time outdoors. The built in WiFi support means that you can also pair it directly to the WiFi network and get notifications without needing a direct Bluetooth connection. We found this to work very well in practise. Walking around the house while the phone was set on charge, we could still get all our notifications since the two were connected to the same WiFi network. 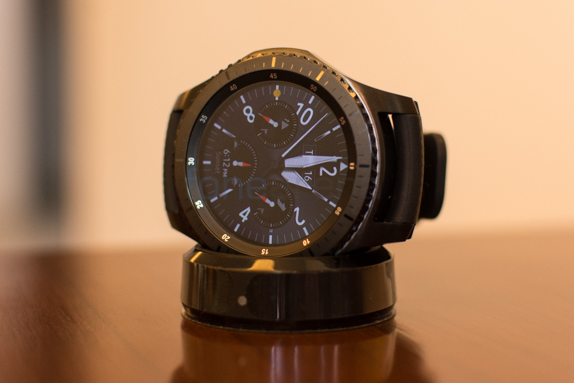 In terms of battery, Samsung claims that the Gear S3 Frontier can last 4 days with the built-in 380 mAh battery. This isn’t true but the battery life is still very impressive compared to other similar devices. A full day of use was very easy to get and this could usually be stretched to a day and half or more. Sure, you can stretch it even further but you’ll likely want to switch off the connectivity features and put the watch on power saving mode at which point, there’s hardly anything you can use it for. The watch charges pretty quickly using the wireless charging dock bundled in the package.

Despite being bigger than what the author is comfortable with, the Gear S3 Frontier is still a very comfortable smartwatch. That it looks absolutely fantastic and luxurious is an added advantage. It comes well-appointed in terms of connectivity and software features with Tizen being a very good alternative to Android Wear. 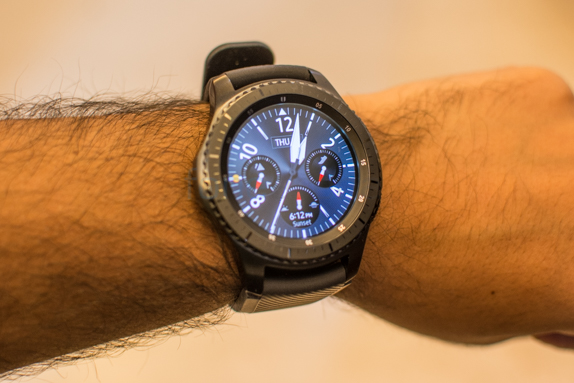 The Samsung Gear S3 Frontier is priced at Rs. 28,500. The Gear S3 Frontier is easily one of the best in the market with only the Apple Watch being a close competitor but with Android Wear 2.0 right around the corner, you’d be well advised to wait for MWC where we’re expecting a slew of new smartwatches to be released.