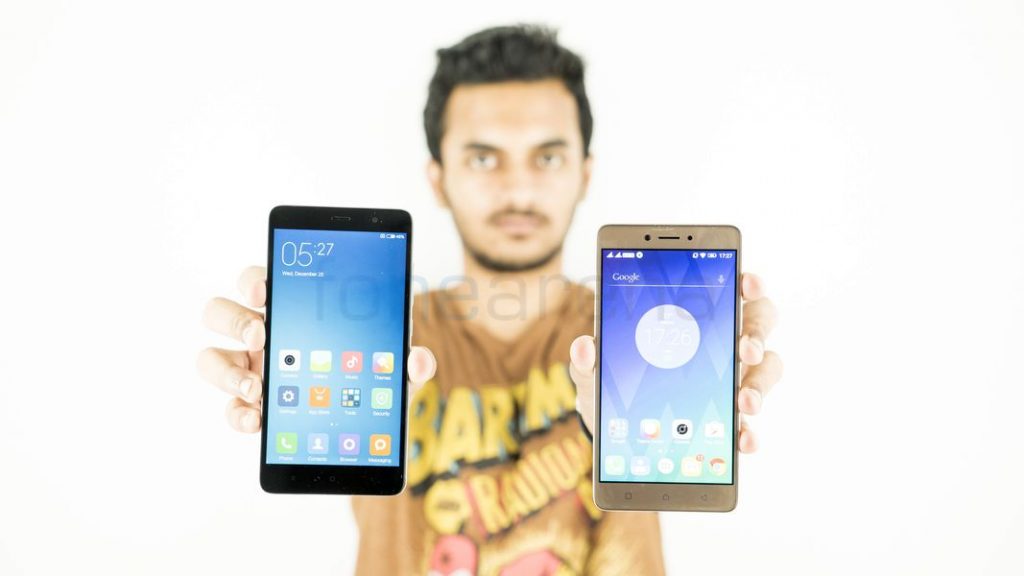 Lenovo launched the successor of K5 Note smartphone in the Indian market dubbed as K6 Note under mid-range segment last month. In a matter of fact, this is the first smartphone under K-series to be available through offline channels.

This smartphone comes with lots of features including Dolby Atmos, TheaterMax technology for VR and much more, starting at Rs. 13,999. Initially, this smartphone has been showcased at IFA 2016 event along with Lenovo K6 and Lenovo K6 Power.

Moreover, this smartphone comes in two variants in terms of RAM–3GB/4GB. The Lenovo K6 Note comes in Dark gray, Gold and Silver colors and is priced at Rs. 13,999 for the 3GB RAM variant, while the 4GB RAM variant costs Rs. 15,499.

On the other hand, Xiaomi launched its most successful smartphone named as Redmi Note 3 in India starting at Rs. 9,999 last year. In fact, when there are two of them in a similar range, one cannot help but compare to see which performs better.

Talking about the physical overview, the Lenovo K6 Note is strikingly similar to its counterpart Xiaomi Redmi Note 3, except the camera bump on the back. The K6 Note comes with a metal unibody design similar to K6 Power smartphone measuring 151 x 76 x 8.4 mm and weighs around 169 grams. 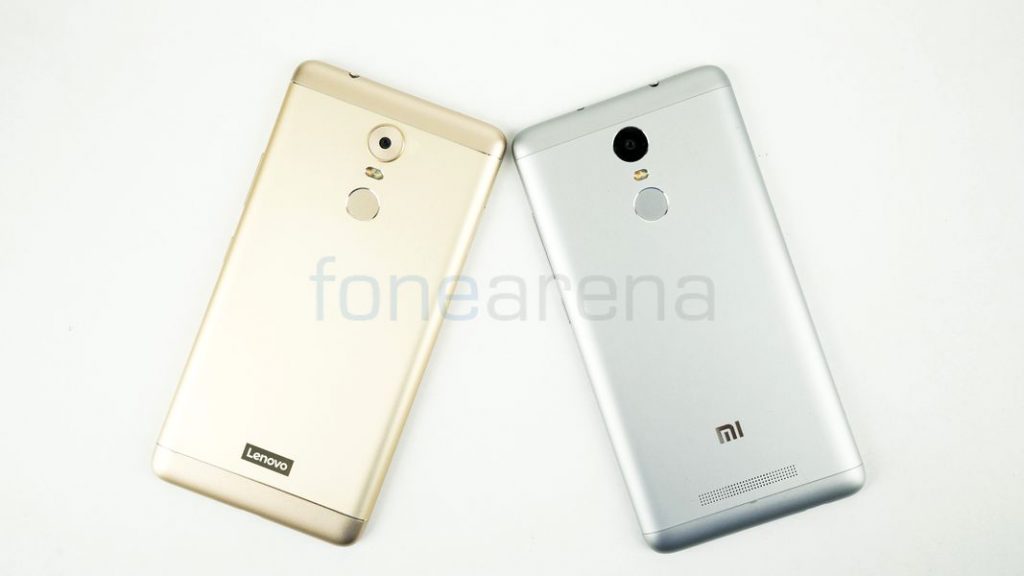 On the other side, the Redmi Note 3 comes with metal unibody design as well. This handset measures, 150x76x8.65 mm in dimension and weighs around 164 grams. Both the smartphones sport an “Always Active” fingerprint sensor on the back just below the camera module.

The placements are more or less same in both the smartphones except the front camera, speaker grill and camera bump on the back. While the capacitive button on Redmi Note 3 is backlit, it’s not the same case in K6 Note. We also did a fingerprint recognition comparison between Redmi Note 3 and Lenovo K6 Note. Surprisingly, the K6 Note is slightly faster than Note 3.

The K6 Note and Redmi Note 3 share almost similar specification sporting a 5.5-inch (1920 x 1080 pixels) Full HD IPS display on the front. There is a very slight difference in terms of pixel density, which should not be an issue. 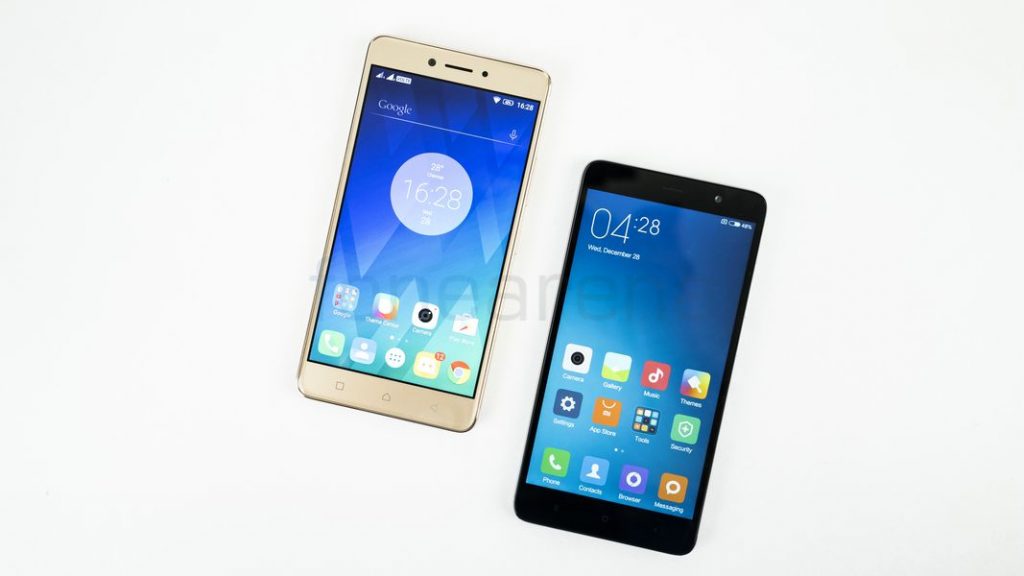 However, the viewing angles and sunlight readability are equally good in both the smartphones, but we observed that the display in K6 Note is a bit brighter than its counterpart Redmi Note 3. 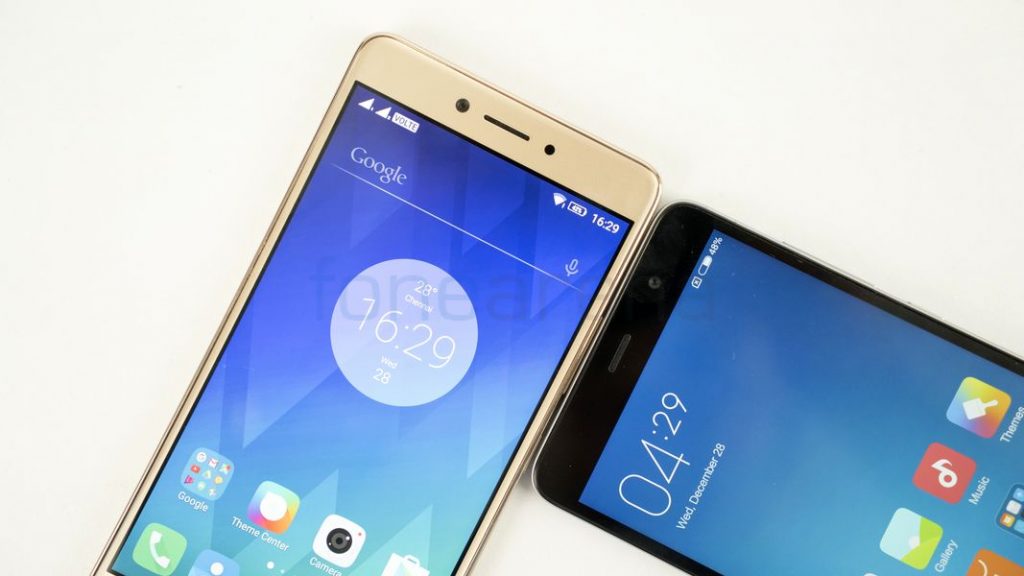 We tested both the mobiles with heavy gaming including Asphalt 8 and Subway Surfer. The gameplay in both K6 Note and Redmi Note 3 are smooth without any frame drop. But, the K6 Note started to heat up slightly during game loading parts. Moreover, we also observed minor lag in K6 Note when compared to Note 3. 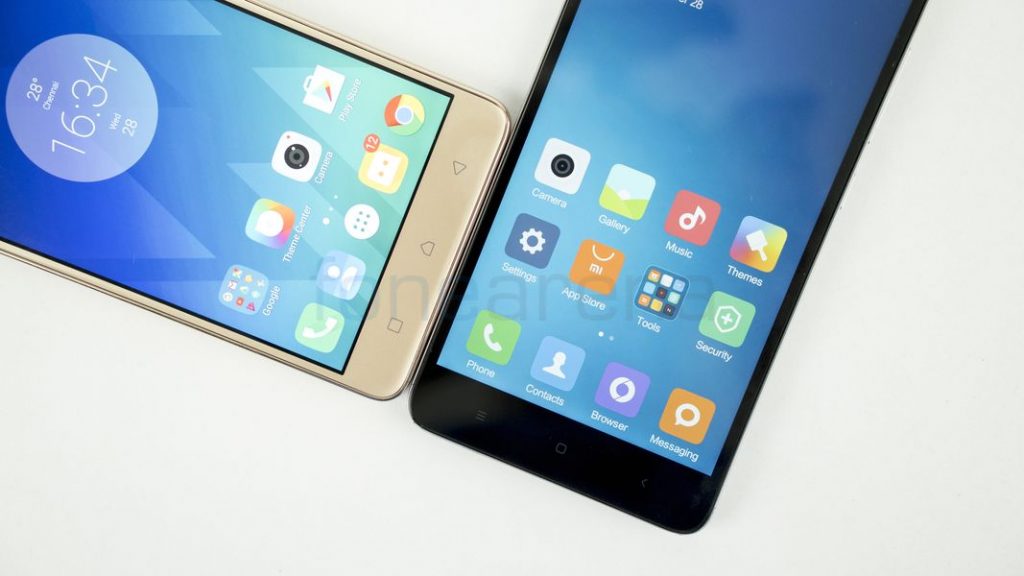 In terms of storage, Lenovo K6 Note offers 32GB of inbuilt storage, out of which user will get around 24GB of free space. If needed, you can also expand the storage up to 128GB via MicroSD card slot. The Redmi Note 3 comes in two variants 2GB RAM with 16GB storage / 3GB RAM with 32GB storage and can be expanded through MicroSD card slot up to 256GB. Both these have hybrid dual SIM slots, so you can only use a nano SIM or a microSD card on the second slot at a time.

Coming to the camera department, the Lenovo K6 Note is equipped with a 16MP rear camera with dual tone LED flash and 8MP front camera on board. 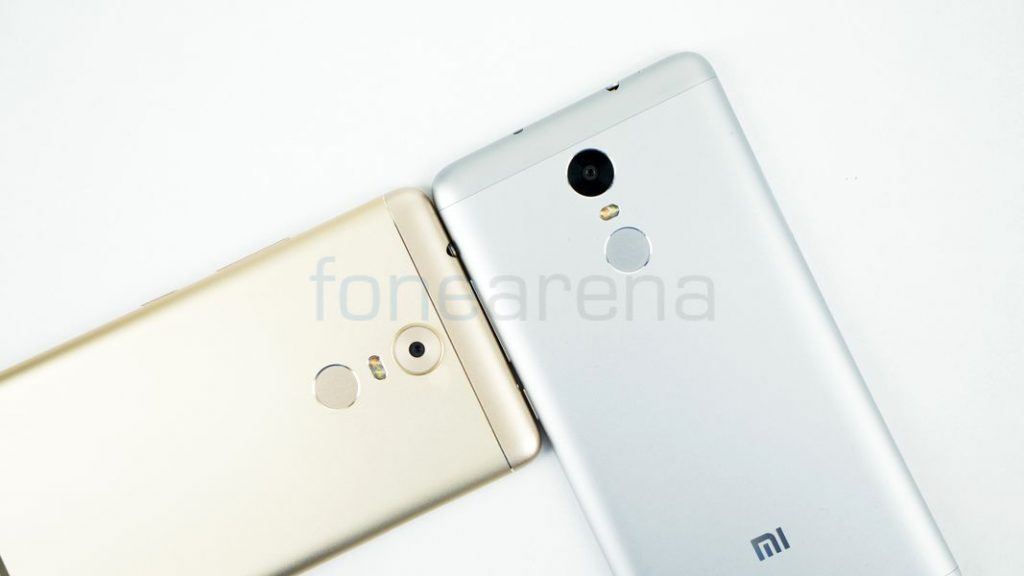 In the real world usage, both the camera performs well under broad day light conditions with good details and color reproductions. The images shot on Redmi Note 3 tends to be sharper than the image shot by K6 Note. Talking about the low light performance, surprisingly Lenovo K6 Note captures better picture when compared to its counterpart.

Moreover, the camera interface is simple on both the smartphone without any complexity and also has lots of shooting modes to shoot as well.

Check out some camera samples (click the image for full resolution sample). The one on the left is Lenovo K6 Note and the right image is Redmi Note 3.

On to the software, both the smartphone run Android 6.0 (Marshmallow ) with their own custom UI on top. While Redmi Note 3 comes with MIUI 8, the Lenovo K6 Note runs on Vibe Pure UI. Comparatively, the MIUI is much more customizable than the Vibe UI.

Moreover, it also comes with shortcut menu called as ‘Quick Ball’ similar to Apple’s Assistive touch. This Quick Ball lets you add up 5 different options, which can be placed anywhere on the edge of the display. Also, it comes pre-installed with native apps that can clean junk, scan virus and much more. You will get access to various themes and wallpapers from the collection, Mi Remote that lets you control infrared appliances in your home. 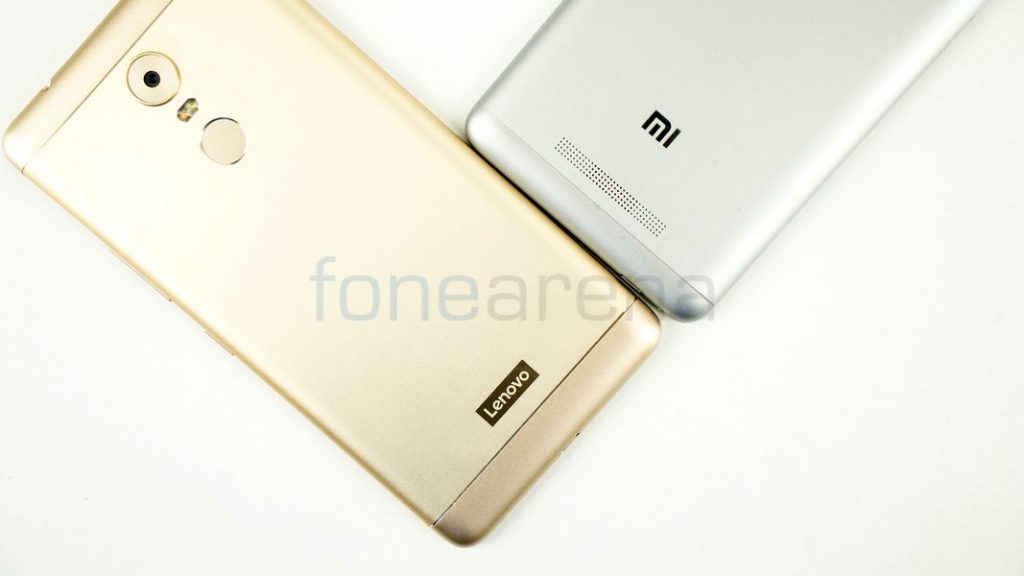 On the other hand, the Vibe UI do come with features, but not as generous as the MIUI 8. The K6 Note has ‘Secure Zone’ that allows the user to configure the apps, accounts, wallpapers and much more. This seems to be a lot familiar and similar to the Second Space feature found inside Xiaomi’s MIUI 8.

You can also enable the ‘Knock to light’ from the settings to enable double tap to wake the screen up when it’s locked. There is a ‘Fingerprint Snap’ feature, that acts as a shutter button to snap a picture. Additionally, the K6 Note scores more when it comes to the VR experience. It has TheaterMax technology, similar to most other Lenovo Vibe series phones for an immersive VR experience when combined with a VR headset. 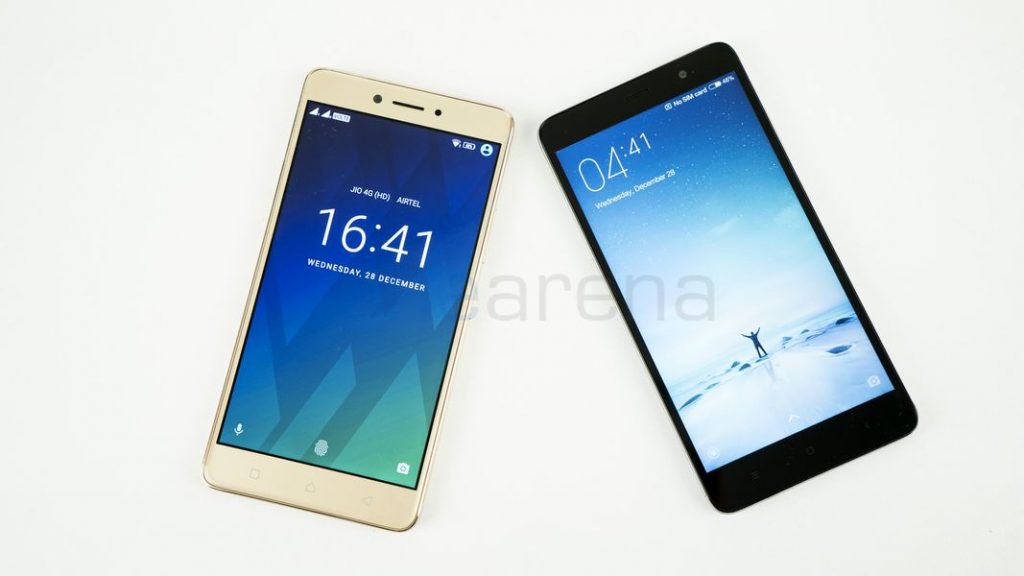 In order to experience it, you need ANT VR headset which was initially launched with the Lenovo Vibe K4 Note. This VR headset actually allows the users to experience anything including media like movies, games, and much more with a 100-degree field of view. It’s worth mentioning that you need to buy ANT VR separately if you don’t have one.

At the end, the UI preference really comes down to personal choice. Personally, we think MIUI is the one, but when it comes to VR experience Pure Vibe UI with theater max technology stands tall.

Having said that, there is no information yet about the Android 7.0 Nougat update for both the phones.

The Lenovo Vibe K6 Note is juiced with 4000mAh built-in battery and the Redmi Note 3 has a 4050mAh non-removable battery inside. Both the smartphones support connectivity options including 4G VoLTE, Wi-Fi 802.11 b/g/n, Bluetooth 4.1, GPS and 3.5mm audio jack. The Redmi Note 3 also has an infrared sensor, which is absent in the K6 Note.

Comparing the Lenovo K6 Note and the Xiaomi Redmi Note 3, both the smartphones have its very own advantage. When it comes to Lenovo K6 Note, it has a premium build quality, user-friendly UI, good battery life and has TheaterMax support for VR experience. The Redmi Note 3 on the other side is known for its commendable performance, customizable UI and good battery life.