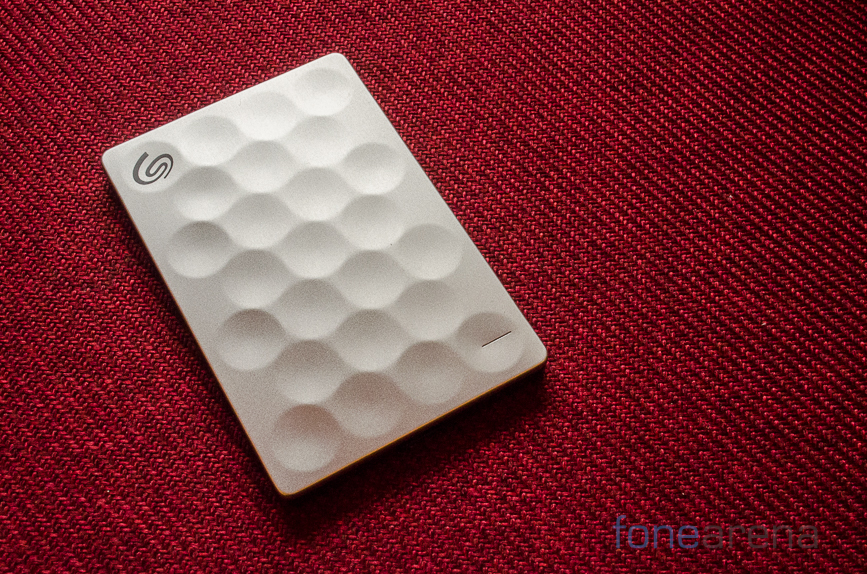 It’s hard to believe how far we have come in terms of storage technology. It wasn’t too long ago when a terabyte was an unbelievably large amount of storage. Over time as we got accustomed to the size, what didn’t change drastically was the size of the drive. With the Backup Plus Ultra Slim drive, Seagate has managed to create a drive that ranks amongst the slimmest in the world and packs design sensibilities that really set it apart.

It’s not too often that you get to call a hard drive, good-looking. A device that is synonymous with sheer utility, Seagate has managed to put quite a fashionable spin on it thereby making it a gadget that you wouldn’t mind placing front, right and center next time you’re working from your favorite cafe. 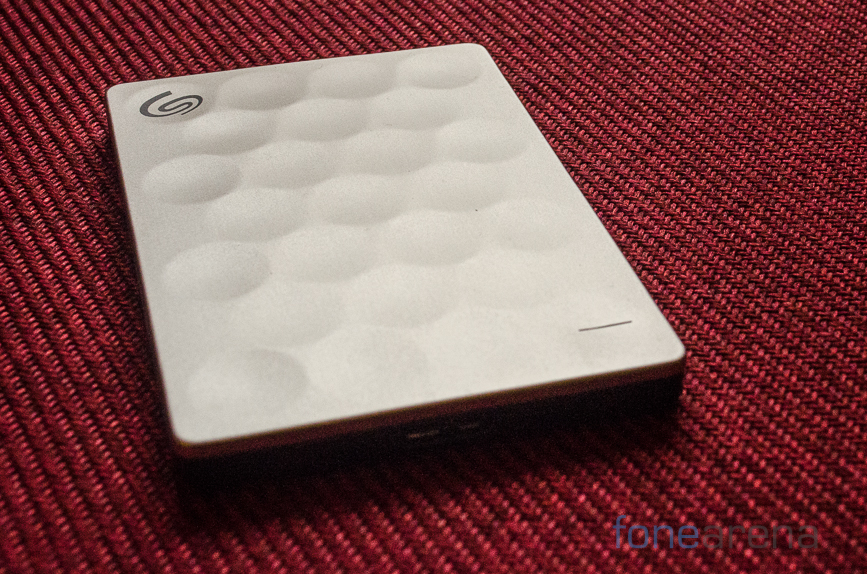 The top of the drive has a metal plate with golf ball like dimples that add to the design element. The drive absolutely stands out from a design perspective and is something that would be well appreciated by fashion forward consumers. 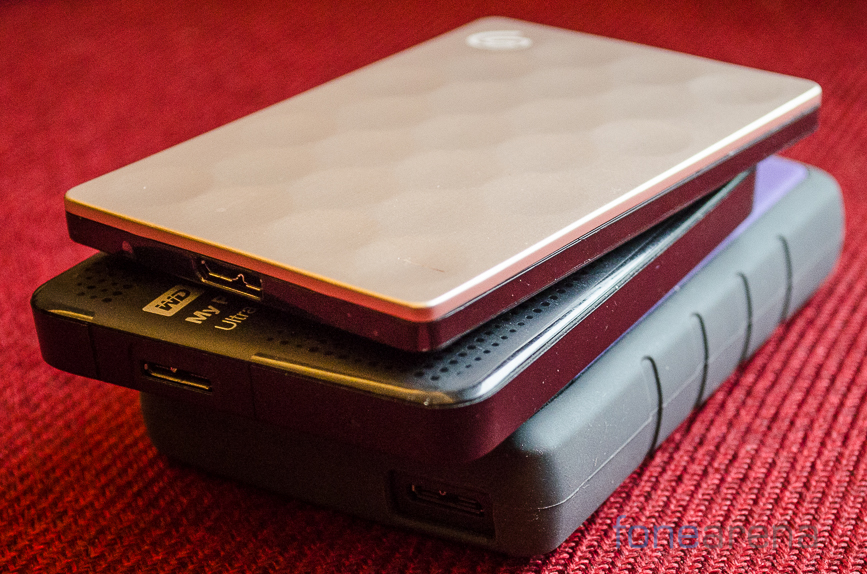 In addition to being extremely slim, the Seagate is also incredibly light and easily slides into a pocket. As you can see in the comparison shot above, two of the 2TB Seagate drives would be as thick as a single Western Digital My Passport 1 TB drive. The Transcend drive in contrast is even thicker albeit with the benefit of having an anti-shock rubber casing wrapped around it. With the svelte dimensions of 4.47 x 2.99 x 0.38 inches and weight less than 150 grams, this truly is cutting edge hardware from Seagate.

The hard drive interfaces over USB 3.0 and so theoretically has a maximum transfer rate of 5gbps but that of course does not correspond to real life performance. 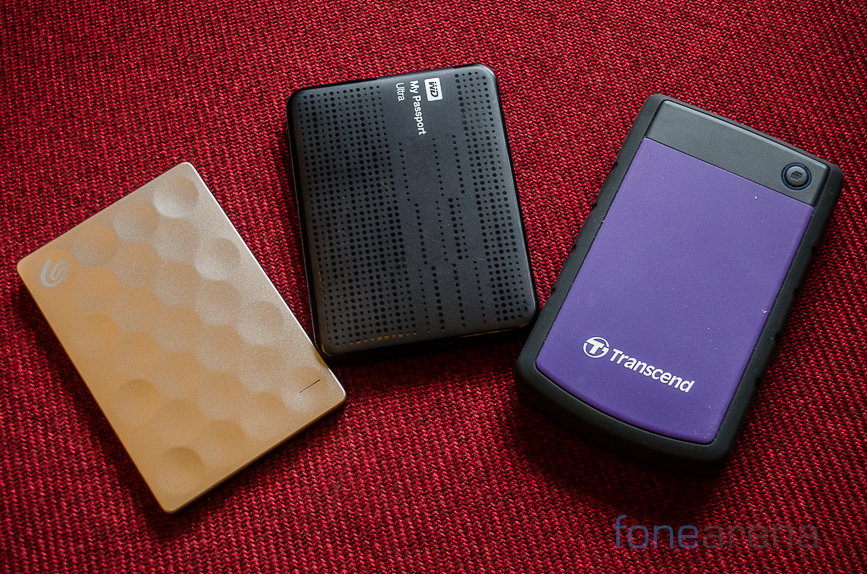 We compared the Seagate Ultra Slim to a range of hard drives we had available to us across manufacturers and capacities to see how well it performs. Since hard drives perform very differently when you are transferring multiple smaller files versus larger single files, we accounted for both when performing our read / write speed tests. 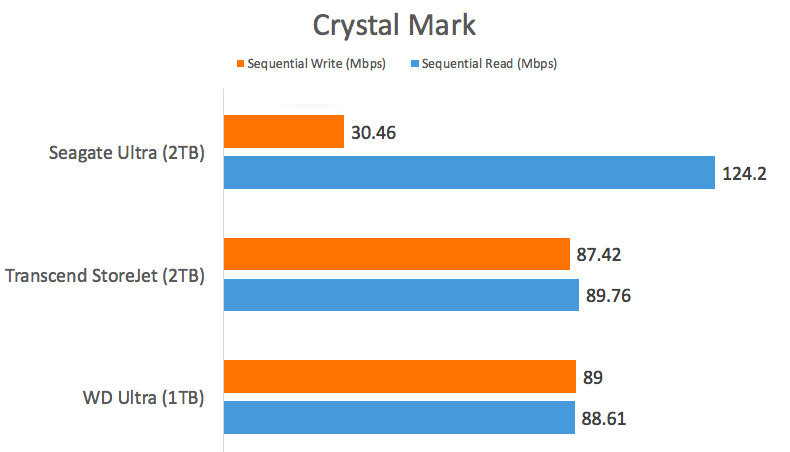 In the Crystal Mark benchmark test, it was discovered that write speeds with a simulated mixed load of 4 Gigabytes maxed out at 30.46Mbps. In contrast the Transcend Storejet that uses a Hitachi drive had a maximum write speed of almost three times the speed reaching up to 87.42Mbps. Our Western Digital Ultra 1 Terabyte drive maxed out at 89Mbps. On the other hand read speed was the highest on the Seagate drive with a maximum of 124.2 Mbps. The other two drives touched 89Mbps which isn’t a bad score either. 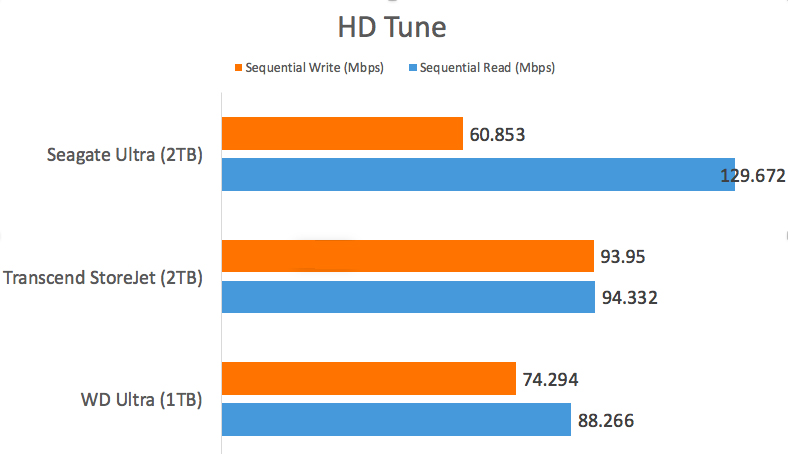 In the HD Tune benchmark, we simulated copying over a 2Gigabyte file for our read / write tests. Here too, like before the Seagate Ultra proved to be the slowest at writing the data with a maximum speed of 60.853Mbps.In contrast the Transcend Storejet and WD Ultra reached 93.95 and 74.294 Mbps respectively. 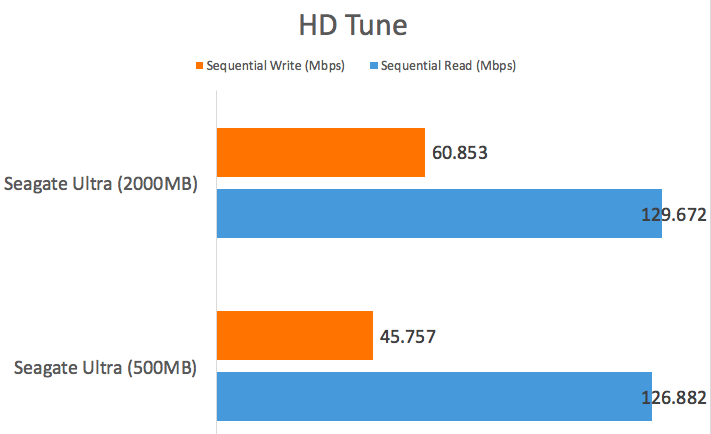 Finally to get a better idea of how the Seagate Ultra Slim drive would perform under regular use, we ran multiple tests where we transferred files that were 2GB as well as 500MB files. Now most hardware enthusiasts would know that due to the way hard drives perform, write speeds for a larger number of smaller size is always more than a single large file. This was well reflected in our tests where we observed that write speeds in HD Tune further dropped down to 45.757Mbps as opposed to 60.853Mbps with the larger file. 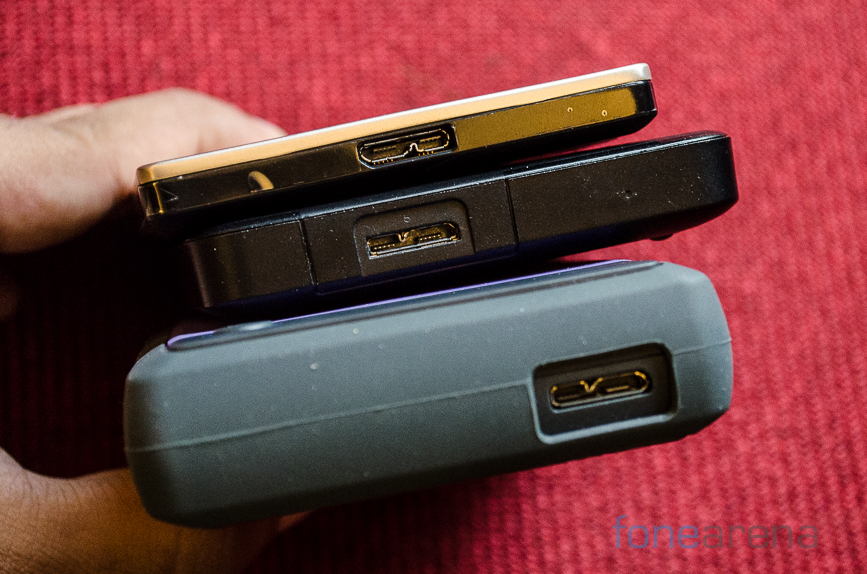 The slim chassis of the Seagate hard drive means that you can feel a lot of vibrations during operations. Add to this the relatively slow write performance and you have a drive that doesn’t quite win from a performance point of view.

The Seagate Ultra Slim drive includes a fairly short USB 3.0 cable with it. A backup utility is also provided with the drive to allow you to easily schedule and run backups though you’d be better served by using a more robust solution. Lastly, there’s 200GB of OneDrive storage bundled in with the hard drive and will be valid for two years. This last bit is a bit ironic to see considering you are investing in a massive amount of local storage but it still is a nice gesture allowing you to store all your essential documents in the cloud thereby making them accessible even when you aren’t carrying the drive.

There’s no two ways about it, with the Seagate Backup Plus Ultra Slim drive you’re definitely paying a premium for design. This an incredibly slim and small hard-drive packing a whopping 2 terabytes of storage and there’s nothing about it that doesn’t amaze from a technology perspective. 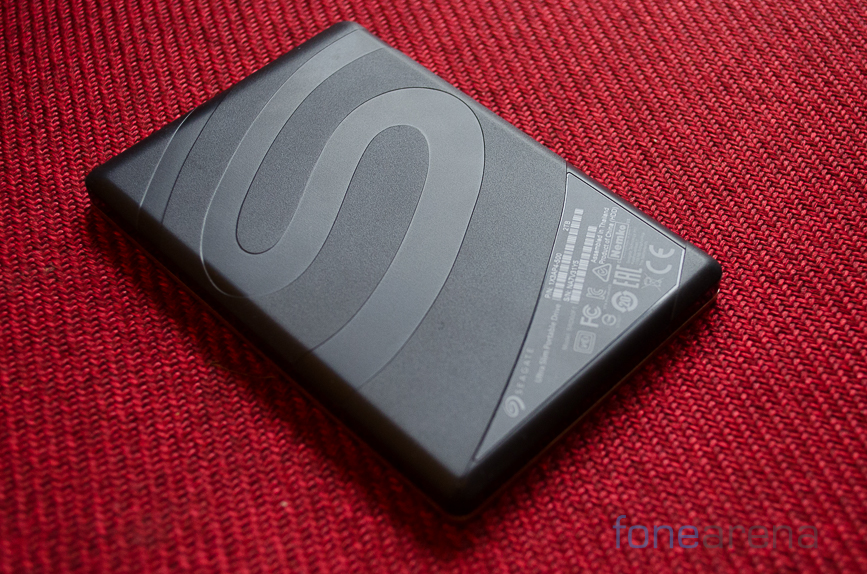 Unfortunately the constraints brought upon here mean that the write speeds can be up to half that of the competition making it relatively slow to work with. The slim shell also means that you can feel each and every vibration of the spinning platter and that doesn’t exude much confidence. Yes, the device is priced somewhat high but such is the pace of technology where early adopters end up paying a premium. At Rs. 8,399, the Seagate Backup Plus Ultra Slim isn’t too badly priced for a taste of cutting edge technology, for everyone else you can get a similar or even better performing product for much cheaper.