LeEco in consonance with Prime Minister Narendra Modi’s ‘Make in India’ initiative is all set to inaugurate its first ever manufacturing facility in India. The inauguration ceremony will be held on 30th August in New Delhi in the presence of current Union Minister for Electronics & Information Technology, Shri Ravi Shankar Prasad. 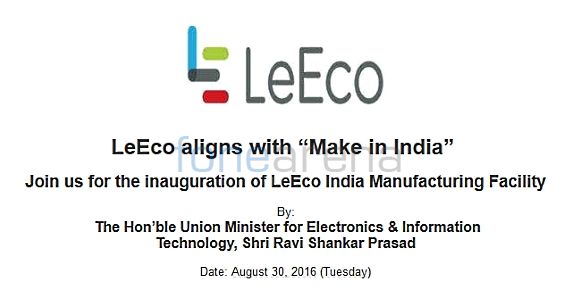 Previously, the firm had introduced its first ‘Made for India’ smartphone – the Le 1s Eco earlier this year in May, and announced that it will be setting up in-house Content Delivery Networks (CDNs) in 10 cities across India by end of 2016 with investment of over US$ 10 million.

The LeEco India is headquartered in Bangalore operates with more than 200 employees as of now and aims to become over 1000 people-strong by the end of 2016. The company recently appointed former Qualcomm executive Jaiteerth Patwari as head of Development Centre for LeMall India to boost its e-commerce presence in the country.