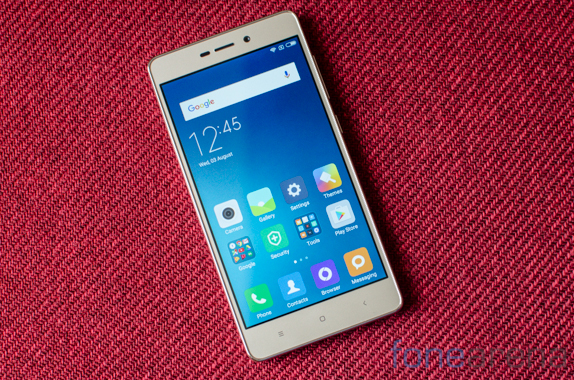 As the competition progressively gets tougher in the Indian smartphone space, we’re increasingly seeing Xiaomi get more aggressive. Not just on price but also with the frequency of launches, the company wants to retain and enhance its foothold in the bread and butter, sub 10,000 rupee market. As millions of Indians start buying their first smartphones, it is this very segment where most manufacturers are hankering to grab a piece of the pie. We’ve had our hands on the Xiaomi Redmi 3S Prime for a couple of days now and here’s our review.

The Redmi 3S follows a design language that is nigh identical to that on the Redmi Note 3. Shrink down the latter a little bit and you’ve got the Redmi 3S. Can’t really complain about that either since the design isn’t quite the eyesore though it errs on the side of utilitarian. 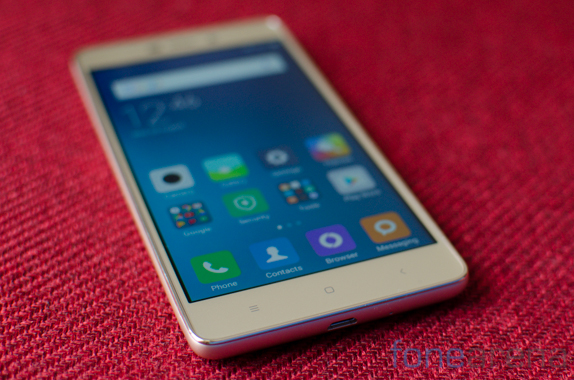 The front of the phone is dominated by the 5inch display that is flanked on all sides by bezels. Below the screen  you have three capacitive keys that correspond to menu, home and back. This is rather typical of the company’s phones. The bezels on the side of the display are relatively narrow and don’t detract from the experience. Up top is a 5MP front facing camera with the earpiece placed next to it. A metallic band runs all around the front of the phone that prevents the phone from laying flat on a surface and the screen getting scratched. The phone does have some sort of protective glass on top but the company refused to divulge what kind it is. Suffice to say that you should probably look at investing in a good screen protector for your device.

The power button and volume rocker is placed on the right hand side. The power button is on the mushier side but is ergonomically placed to be easily reachable. The volume rocker on the other hand is a single non-segmented button that we are personally not too fond of but this isn’t really an issue in day-to-day usage. Over on the left is a hybrid SIM card slot that can house two nano SIM cards or a single SIM alongside a microSD card. At the top is a 3.5mm audio jack alongside an IR blaster that can be used for controlling a range of consumer electronics via the built-in Mi Remote app. The phone charges over a microUSB port placed at the bottom. 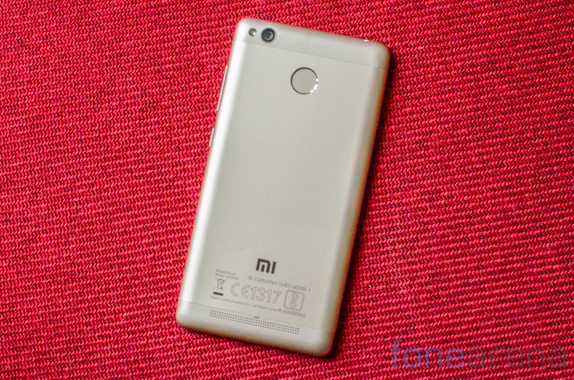 The back of the phone is a very clean affair and the only branding is just a silk-screened Mi logo towards the bottom. The handset is being manufactured in India and says so at the bottom. Up above is the fingerprint scanner while the camera module and its accompanying flash is placed at the top left corner. It is worth noting that only the Prime variant ie the 3GB / 32GB storage variant comes with a fingerprint scanner. 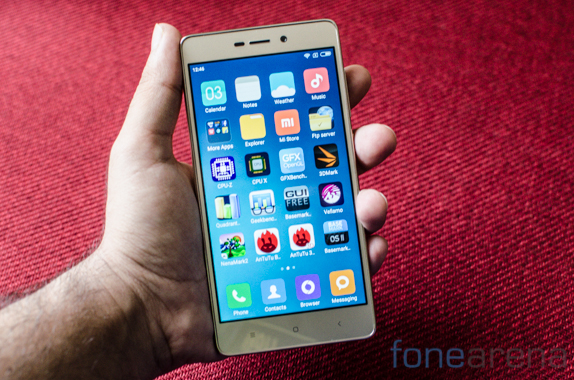 The dimensions of the Redmi 3S come in at 139.3 x 69.6 x 8.5mm and with a weight of 144 grams, the phone is pretty compact. From an ergonomics perspective, the smaller 5 inch display on the Redmi 3S makes it feel really good in the hand, and manages to fit well even in tight pockets. It might not be the smartest looking device around but it sure is a very comfortable device to use.

If you’ve used a Xiaomi device, you have a good idea of how MIUI works. Based on Android 6.0.1, MIUI 7 on the Redmi 3S is a completely redesigned take on Android with several iPhone-esque cues all around.

The lockscreen is a clean affair with a clock up top and notifications taking over as necessary. You can switch out the wallpapers using a built-in tool that can be activated right from the lockscreen. Enter the homescreen and you’ll notice that the phone eschews the two level hierarchy common on Android devices. There is no separate app drawer here and all apps are placed straight on the homescreen itself. A shortcut tray lies at the bottom.

There’s a fair few preinstalled apps on board that come part of the MIUI offering. For the most part these add utility to the experience but if you want a clean software experience, you’re probably going to be disappointed by the device. There are a couple of bundled apps like those for Amazon, Facebook, Flipkart, Swiftkey and WPS Office. It is possible to uninstall these.

There’s a Snapdragon 430 processor onboard the handset that includes an Adreno 505 GPU. The Snapdragon 430 might not be the de-facto choice from a performance perspective but what it does offer is a great balance between usability and battery life. Indeed, in day-to-day use you’ll struggle to find a skipped frame or a hint of lag. The 720p display further helps in this regard by going easy on the GPU. Though the phone will be available in both 2GB and 3GB variants, we’d recommend sticking to the higher end variant that we’ve been testing unless you really don’t want to spend the extra amount. Even with games, the performance was satisfactorily smooth though we did observe a mild amount of heating near the camera. We’ve included a number of benchmarks below to give you a better idea of comparative performance. 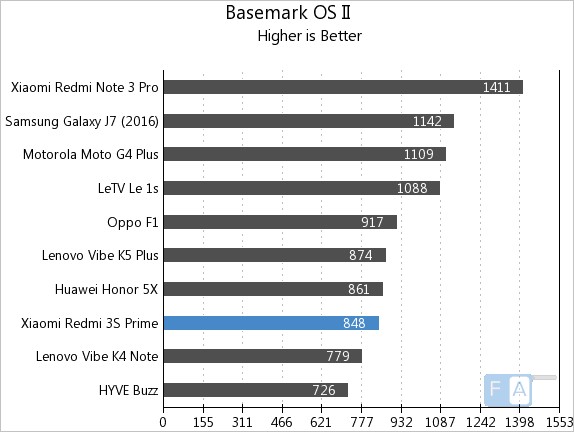 In Basemark OS II, the phone scores 848 points which places it around the middle of our test bench.

In 3D Mark Ice Storm which measures GPU performance, the phone scores 9401 points which places it in the upper half of the test bench but is half of what the Redmi Note 3 Pro scores. 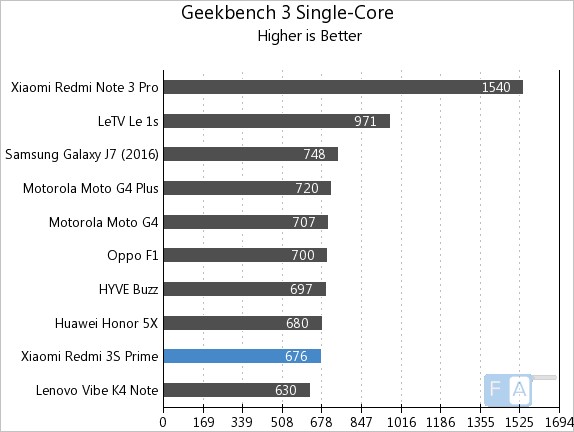 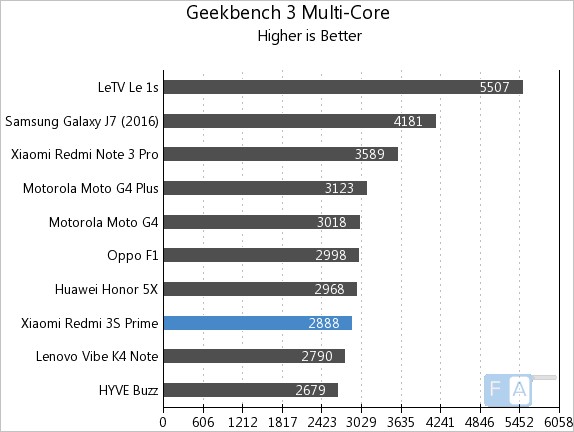 In the Geekbench 3 Multi-Core benchmark, the phone scores 2888 points.

Sacrifices have to be made when developing a device as affordable as the Redmi 3S. The display is usually amongst the first to suffer and that’s true to an extent here too. We found the contrast levels to be below average because of which the phone isn’t the best device around for multimedia consumption. The color rendition tends to err towards a more natural tone. 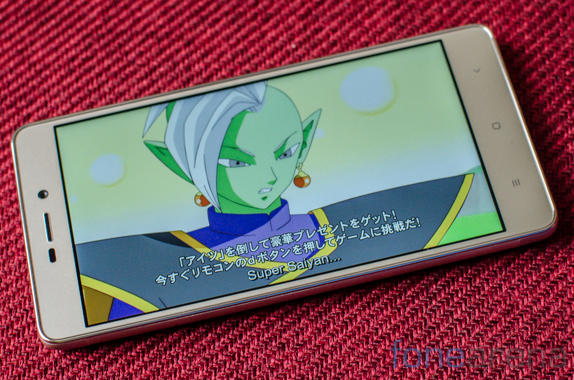 Brightness levels on the Redmi 3S go quite high, sufficient enough to facilitate viewing outdoors. While we certainly wouldn’t mind it if the display went brighter still, we’d be nitpicking if we found this to be a concern. Viewing angles too are decent enough though there is a slight color shift when watching from extreme angles. The 5 inch display with a 720p resolution offers a pixel density of 293ppi. 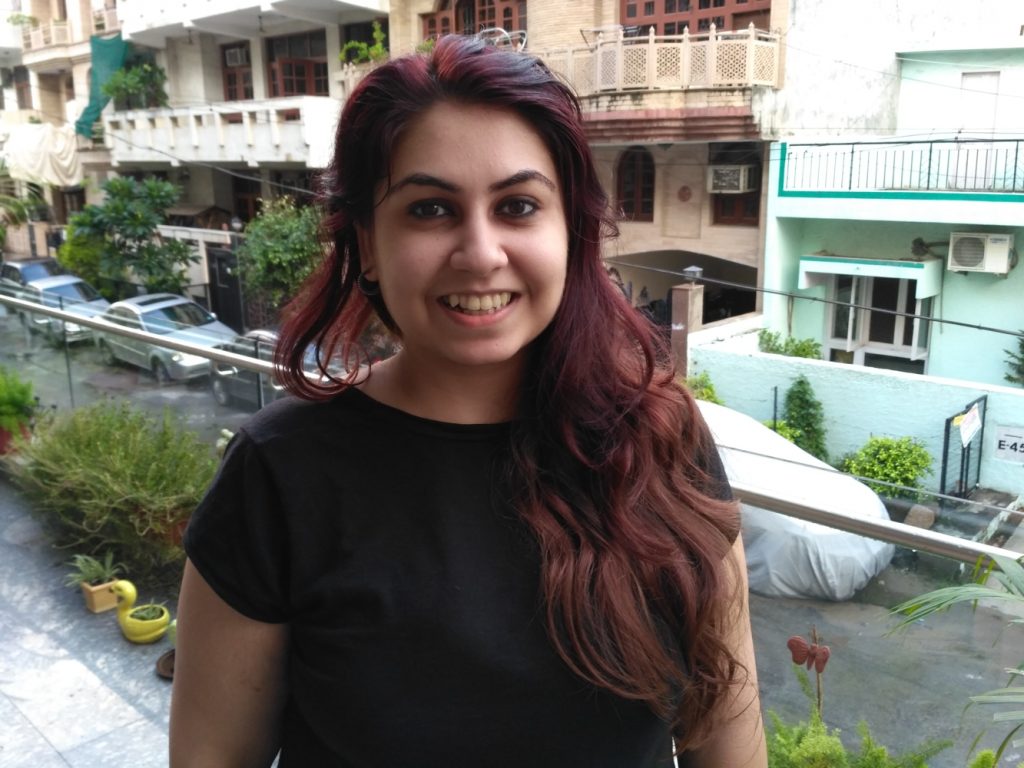 The camera module performs well in decent lighting though it tends to blow out the highlights. Dynamic range is relatively limited as there is a loss details in the shadow region.

For the most part, we were satisfied with shots from the Redmi 3S especially given the target price point. In low light conditions, the image quality predictably drops as photos become softer and noise levels creep up.

The Redmi 3S comes well equipped in terms of connectivity options including 4G LTE, VoLTE, Wi-Fi 802.11 b/g/n, Bluetooth 4.1, GPS and GLONASS. There’s a built-in IR blaster as well as we mentioned earlier. The phone has 32GB of storage built-in of which about 24GB is available at launch. You can expand this via the microSD card slot though you’ll have to sacrifice a SIM slot for that privilege.

With a battery rated for over 4,000 mAh you’d expect the Redmi 3S to last long. Add on top the frugal hardware and the small-ish, 720p screen and you’ve got the makings of a very efficient handset.  In our testing, even when we pushed the handset really hard it was impossible for us to deplete it in a day of use. More often than not, we got about two full days of usage out of the Redmi 3S. If battery life is something that concerns you often, then rest assured that it is something you definitely won’t have to worry about with this device. 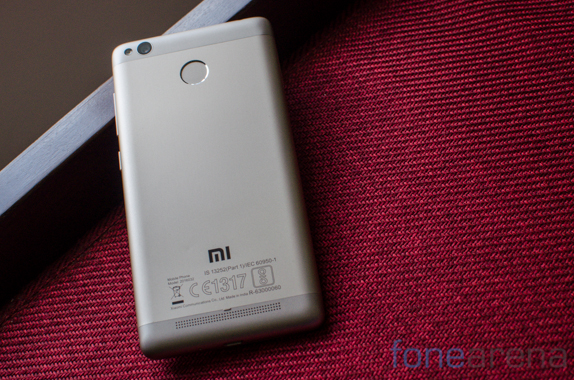 At a price point of Rs. 8,999, the Redmi 3S Prime represents tremendous value for money. Yes, the display isn’t the best around and the camera could be a bit better but they are far from the worst in the category. Moreover, performance for day-to-day use is good enough and the battery life is phenomenal. You’d be well served by stepping up to the Prime variant of the Redmi 3S for the additional RAM, storage and the very useful fingerprint scanner. We would definitely deem the Redmi 3S to be a solid competitor to the likes of the Coolpad Note 3 Lite and others in the category.