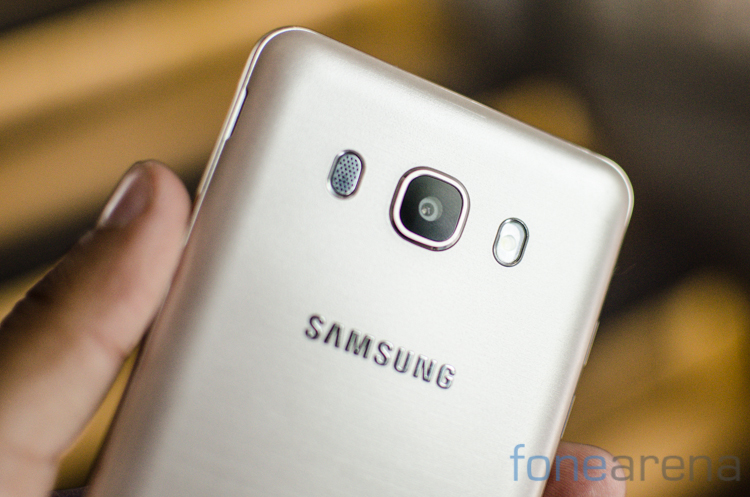 India shipped a total of 23.5 million units of smartphones in Q1 2016 registering 5.2 percent growth over the same period last year, according to the International Data Corporation’s (IDC) Quarterly Mobile Phone Tracker. The smartphone shipments has decreased by 8.2 percent over Q4 2015 and it has been dipping consecutively for two quarters.

As per the report, the “Make in India” initiative continued to promote the local manufacturing in India as more than 25 Vendors are now manufacturing smartphones locally in India. More than two-thirds of the smartphones shipped in Q1 2016 were assembled within the country. Few vendors who are currently assembling mobile phones in India are likely to start manufacturing components like batteries, chargers and data cables owing to encouraging support from central and state governments.

4G based smartphones shipments clocked 15.4 million units in Q1 2016, which has grown more than 6 times over the same period last year. Samsung continued to dominate the Indian smartphone market with 26.6% share followed by Micromax at 12.6% and Intex at 9.2%. Surprise entry in the top 5 vendors list is Reliance Jio which grabbed 7.1% of market share just behind Lenovo at 8.2%. 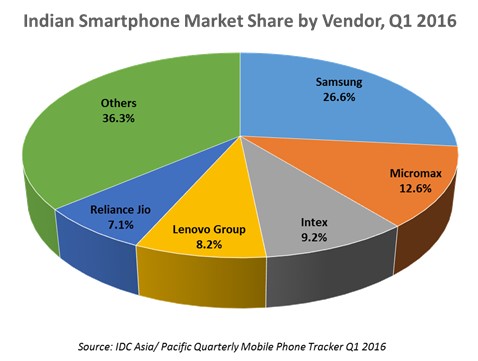 The first quarter of the year is usually expected to be slow after the festive season in the last quarter of the year. However, the contraction in Q1 2016 is mainly propelled by the decline in shipments from all the Top 5 smartphone vendors of previous quarter. Shipments of key Indian vendors Micromax, Intex and Lava put together dropped 20.4 percent sequentially as they struggled to push their inventories into the market.” On the other hand, new entrants like Reliance Jio grew sharply over previous quarter as they prepare before the official launch.

LeEco made its entry in Indian smartphone market in Q1 2016 with its Le1S contributing to majority of the vendor’s shipments. Also, key Chinese vendors like Oppo, Xiaomi, Vivo and Coolpad gained traction in the first quarter of the year with new product launches, aggressive marketing spends and expanding their channel presence

4G based device shipments accounted for 65.5 percent of overall smartphone shipments in Q1 2016 driven primarily by Samsung’s J-series models. This sharp rise in the share of 4G smartphone is due to the cohesive move from the entire ecosystem. Qualcomm and Samsung are spearheading this growth while MediaTek along with Chinese and Indian vendors are driving the 4G volume in India. Adding to that, telecom players are playing a pivotal role in setting up the infrastructure and promoting 4G leading to wider awareness of this next gen technology in India.