Yesterday during Computex Taiwan , Qualcomm famous for the Snapdragon processors showed the sample of its first dual-CPU Snapdragon chipsets.  The 3rd generation Snapdragon Solutions sport 2 Cores Running up to 1.2 GHz . These products are namely MSM8260 and MSM8660 and MSM8x60 series. These third generation chipsets which are specially used to power up smartphones, tablets and smartbook devices. 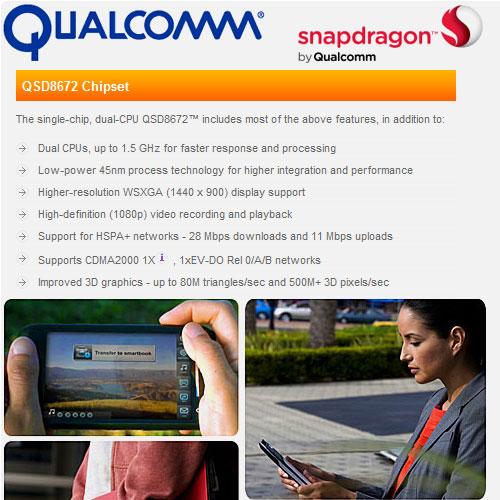 Steve Mollenkopf, executive vice president of Qualcomm and president of Qualcomm CDMA Technologies, said that, by developing the first generation Snapdragon chipsets, a new standard has been set for advanced smartphones and other related devices and the second generation series is already available in the markets. Now the customers of Qualcomm mainly equipment manufacturers are preferring dual core MSM8260 and MSM8660 chipsets for designing future products.

The new chipsets are expected to offer the following features

The Qualcomm’s chipset solution has the following offerings

The new generation dual CPUs have changed the way smartphones and other products can be used.