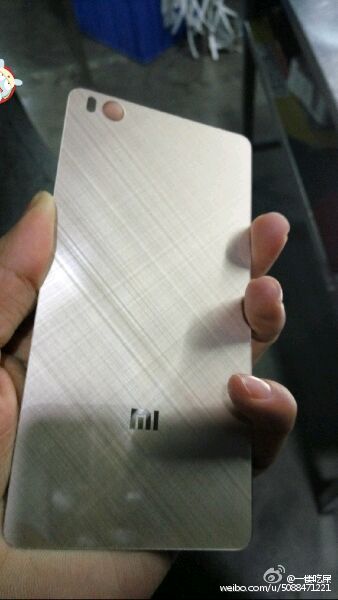 The Xiaomi Mi 5 is the next generation flagship from Xiaomi and it will be announced later this month as confirmed by Hugo Barra. Now, a back panel has been leaked and sources say that it belong to the Mi 5.

The back panel in question is made out of glass and it has a striped pattern unlike the renders of the Xiaomi Mi 5 that we saw before which revealed a plain glass back. The panel is Gold in colour and the phone is expected to come in Black, White and Pink colours as well.

Earlier rumours also indicated that there would be two variants of the Mi 5. One with 3GB of RAM and a glass body and a higher end variant with 4GB of RAM and a full metal body. This seems to be the panel for the lower end variant. Both these devices will be powered by a Snapdragon 820 processor and will have a fingerprint sensor housed within the home button as well.

The Xiaomi Mi 5 will be launched on February 24th and will also have a media preview in Barcelona which is where MWC 2016 is set to take place. Whether we will see two different variants or not remains to be seen but we’ll definitely see the Mi 5 being announced on that day.