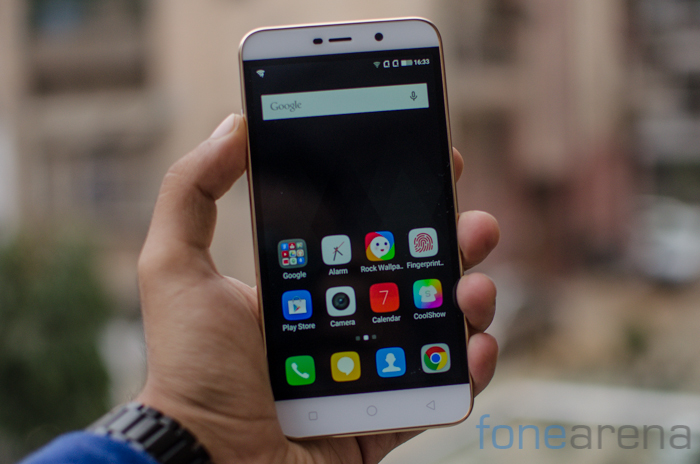 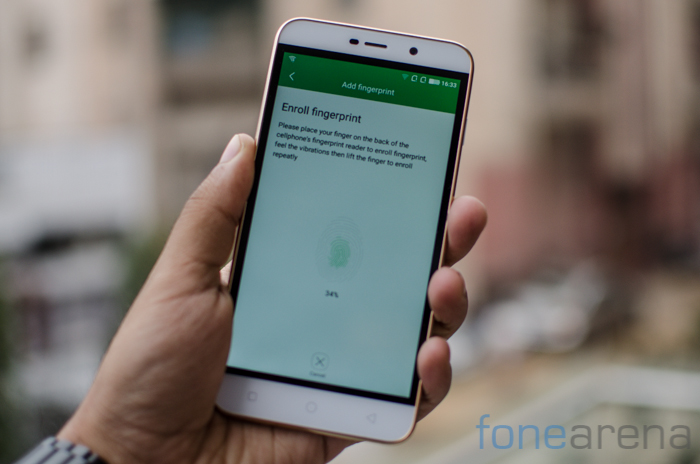 The Coolpad Note 3 Lite is a device that follows up one of the most successful devices of 2015. Priced to undercut its stablemate and designed to impress with solid internals, the Coolpad Note 3 Lite is an intriguing device that is poised to surprise and exceed expectations. Add to that the fact that this is a ‘Made In India’ or at least an assembled in India product, you do start getting excited about it.

Between the Coolpad Note 3 and the Lite variant, design sensibilities remain similar if not identical for the most part. The heavy-handed use of plastics is expected given the positioning of the phone but without a doubt, there is absolutely no questioning the quality of materials. 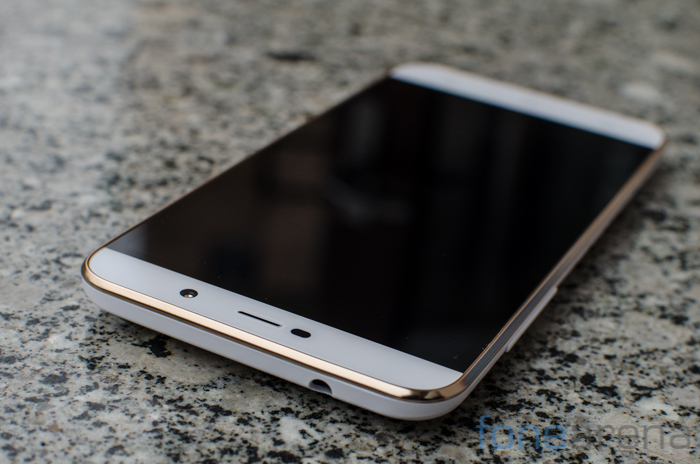 The front of the phone sports a 5 inch display that is flanked by reasonably sized bezels. The black border takes away from the otherwise seamless, edge to edge aesthetics of the phone. There are three capacitive buttons below that do not have backlighting while you’ll find a 5MP front facing camera at the top. Yes, a notification LED is also included here. 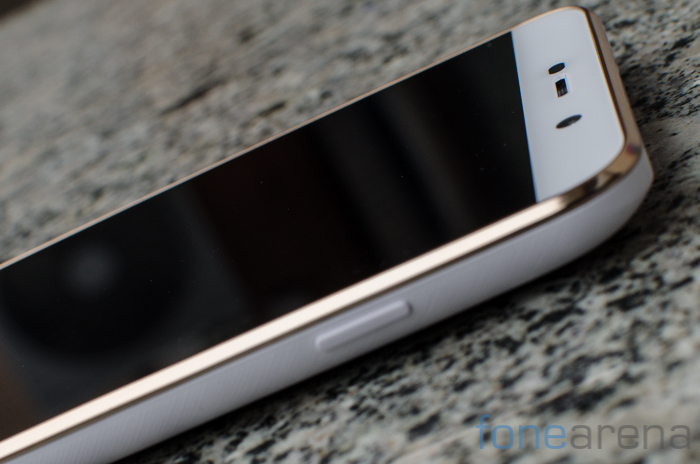 Running along the edges of the phone is a metallic band that at least in our white variant, adds some flavor thanks to its champagne color. Just beyond the band, the plastics taper off towards the rear giving the handset a smooth, curved finish that fits well in the hand. Over on the left side is the volume rocker while the right side of the phone has the power key. Tactile feedback is just sufficient in both these cases though we really wouldn’t mind some extra depth here. 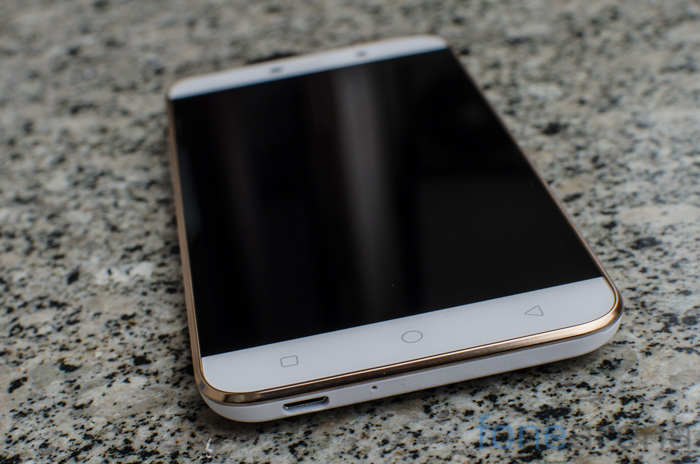 The rear of the phone has a nice and grippy design that is guaranteed to prevent slipping. Here you’ll find the Coolpad logo down low while up above lies the 13MP camera, the fingerprint sensor module.We like how the phone has a more utilitarian look but instead of opts for better ergonomics and higher quality materials. A move not often seen in this category. 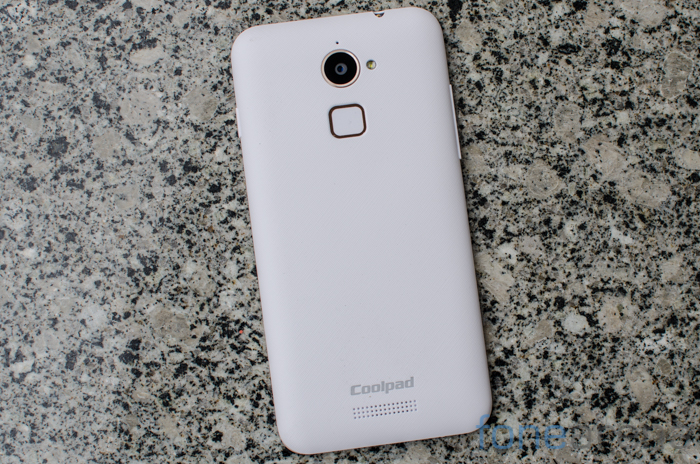 In fact ergonomics are great all the way through from the volume rocker, power button and fingerprint sensor all being easily reachable. The phone has a thickness of 8.9mm which isn’t the slimmest around but is far from chubby. The 142 grams of weight is also very easily manageable.

For all the great hardware on a device, the software experience makes or breaks the experience. The Coolpad Note 3 Lite continues the tradition established by the Coolpad Note 3 and provides software that is likable for the most part. It is based on Android 5.1 and has a custom later called Cool UI running on top. Like the bigger brother handset, we noticed a slight slow down only when running two apps side by side.

The fingerprint scanner which is increasingly becoming a standard feature though not at this price point yet. Nevertheless, the sensor works as you’d expect it to and has the same full fat feature set of other such implementations including the ability to lock specific bits using your fingerprint. There’s a few more nifty additions to the software mentioning. Drop down the notifications shade and you’ll notice two shortcuts marked as C and Multitasking respectively. The former activates an on screen shortcut key that you can drag and place anywhere. Tap it and it will replicate most of the actions of the capacitive buttons while also offering shortcuts to take a screenshot or to switch the profile to mute. The multitasking shortcut on the other hand allows you to run two applications simultaneously on the phone. This isn’t something we really recommend using given the not to fast processor and generally poor experience on a small screen like the one on the Coolpad Note 3 Lite.

The homescreen is a simple affair and brings you straight to the apps. You can further create folders on the home screen to replicate the two level hierarchy. The software on the Coolpad Note 3 Lite is just as robust if not more as on its predecessor. Almost identical, we quite like how the software ties down with the hardware to offer an above average experience.

The handset is powered by a 1.3GHz Quad-Core 64-bit MediaTek MT6735 processor with Mali-T720 GPU. This processor is similar to the MT6753 processor in the Note 3 but makes do with half the number of A53 cores. Surprisingly, this doesn’t have much of an adverse affect on performance. Throughout usage, we found the phone to perform well. High end games predictably took a second or two longer to start up but didn’t show any serious degradation in performance despite half the number of cores. Of course this is helped by the 3GB of RAM onboard that ensures that the phone doesn’t get bogged down while multitasking. 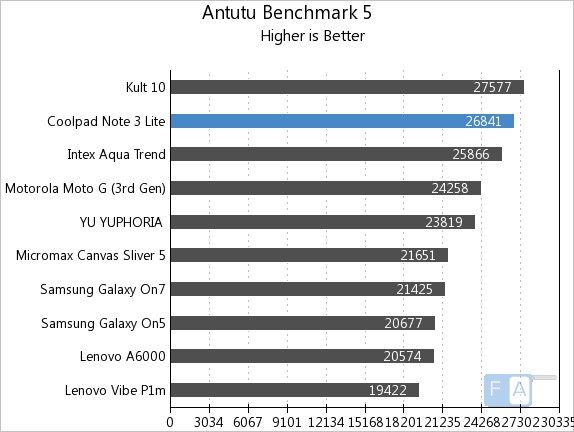 In the AnTuTu benchmark, the phone scored 26841 points. 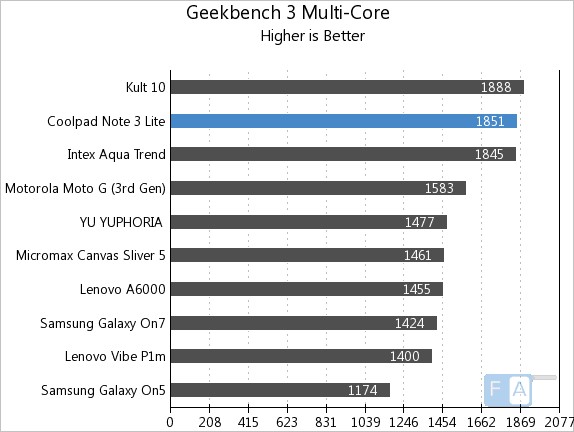 In Geekbench, the phone managed a respectable 1851 points. 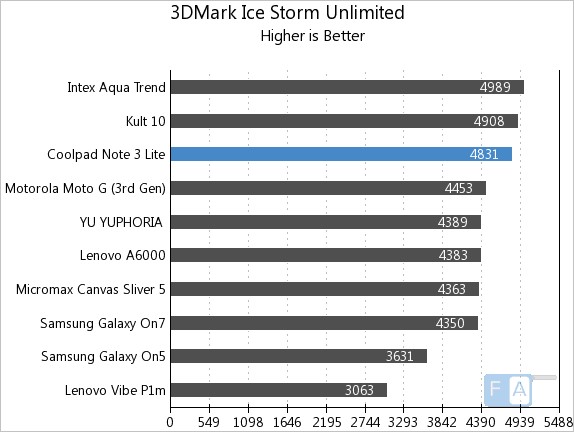 While in 3DMark IceStorm too, the phone ranked high up with a score of 4831.

Equipped with a 5 inch display with a resolution of 1280 x 720 pixels, the Note 3 Lite manages to cram in the same resolution as the larger Note 3 into a smaller display resulting in a very respectable DPI.

The phone has a bright and vibrant HD IPS panel that easily masks the absence of a Full HD panel. The phone remained visible outdoors due to the bright display on offer and color accuracy is very good on this display. The extra reflective surface of the device played truant with visibility in bright environs but the display was able to mitigate this to a large degree.

With a 13MP rear camera and a 5MP front facing shooter, the Coolpad Note 3 Lite seems to have good camera credentials at least on paper. That said, the proof is in the pudding and we tested out the camera in a range of scenarios to gauge if it was any good. In bright sunlight, the phone performed admirably. Images were well detailed and the colors were natural. Noise levels were in control just as you’d expect. 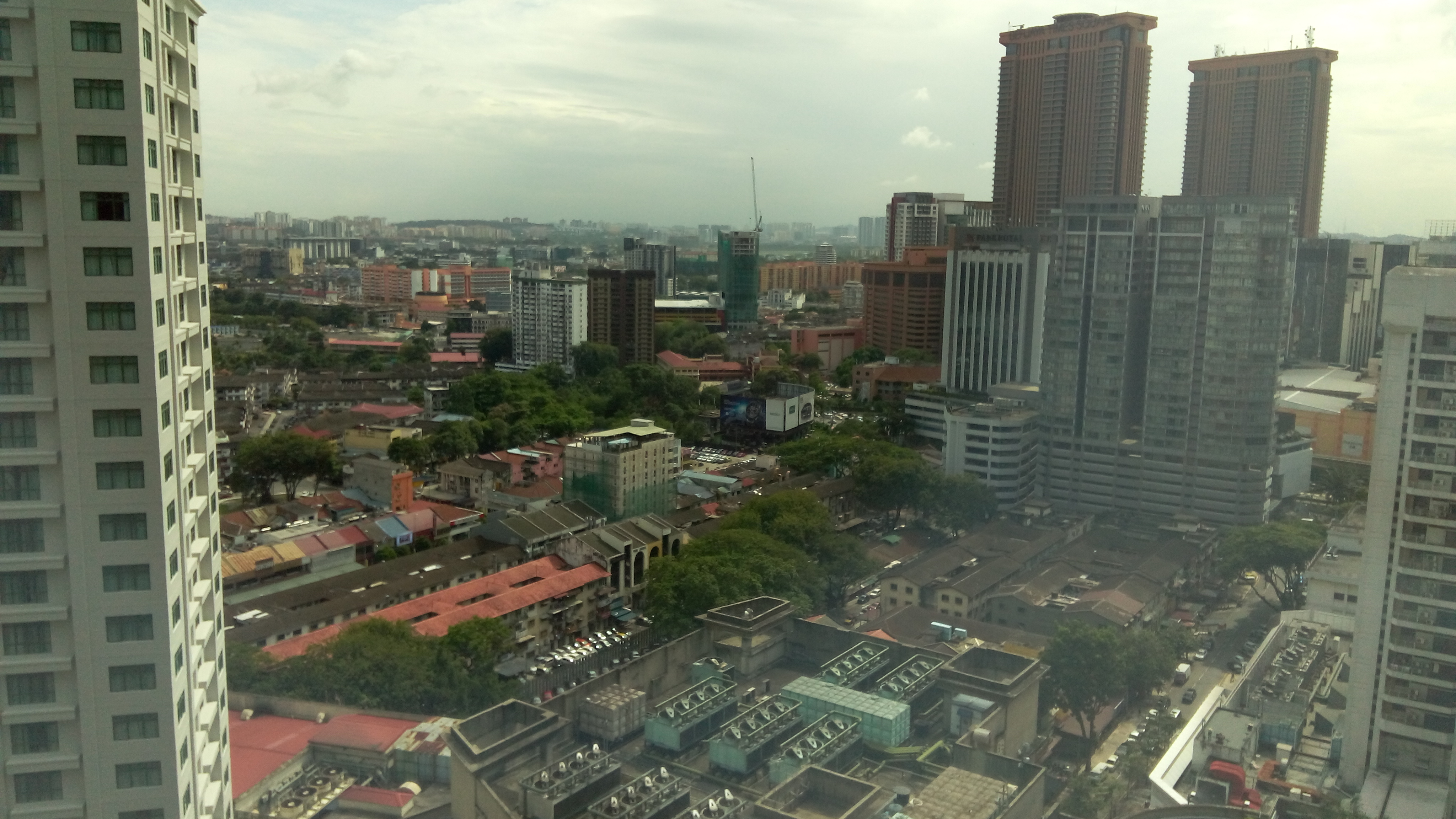 Dynamic range was a bit limited and so images with vastly different bright, dark regions would end up with lost details in the shadow region. In low light, the f/2.2 aperture meant that the camera managed to take in a fair amount of light. Images weren’t very bright but noise was controlled to the point that images appear clean unless you start pixel peeping. The camera works very well generally and only catches itself off guard in low lit conditions.

Connectivity options onboard the handset include 4G LTE / 3G HSPA+, Wi-Fi 802.11 b/g/n, Bluetooth 4.0, GPS and USB OTG. This is a Dual SIM handset with Active Standby available on both. In terms of storage, you get 16GB onboard of which about 10.6GB is available at first boot. You can expand that via the microSD card slot or via USB OTG as you please. The smaller screen means that Coolpad has opted for a smaller 2500mAh battery that on paper should perform worse. The combination of a smaller display and slower processor however means that the handset matches and often outshines the Note 3 in terms of battery backup. A full day of usage is very easily achievable on the Coolpad Note 3 Lite. 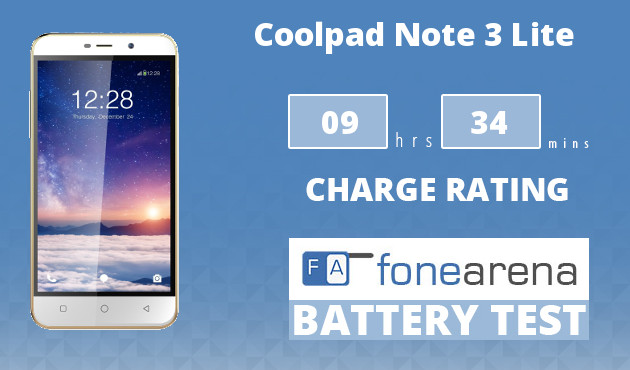 It achieved a One Charge Rating of 09 hours and 34 minutes, which is good for a smartphone with a 2500mAh battery. Check out the complete set of Coolpad Note 3 Lite battery life test results here.

Priced at Rs. 6,999; the Coolpad Note 3 Lite offers a robust amalgam of great hardware, equally well optimized software resulting in an experience that leaves little to complain about. 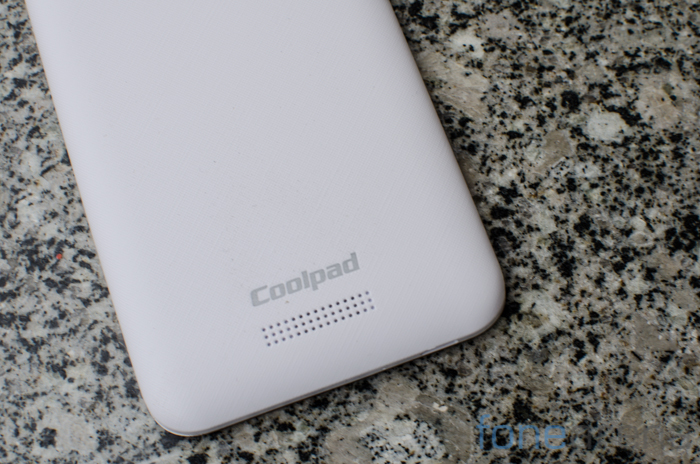 Indeed, it stands out tall amongst the competition. Would we recommend the phone? Absolutely. The Coolpad Note 3 Lite ranks amongst the best phones that you can buy if you are looking at a sub Rs. 8,000 budget.