Syntonetic the company which released the PlaylistDJ app for Nokia Touchscreen phones is now making the app available for free for non-touchscreen Nokia phones too.  The app basically analyzes your music library stored on the phone and then displays tracks based on the mood of the song – joy, passion, anger and tempo etc. The app has is approaching 1 million downloads on the OVI Store already. 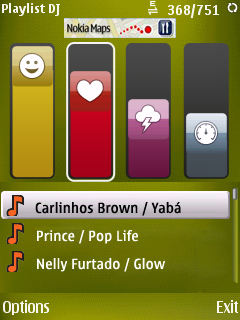 “Playlist DJ has been an excellent addition to Ovi Store’s growing music app category for Nokia devices,” said Marco Argenti, vice president and global head of media, Nokia. “Nokia is happy to expand its relationship with Syntonetic by making this app available to more Nokia device owners with this new offering, and we’re eager for Syntonetic to add new features and grow its listener base.”

“Playlist DJ has been extremely successful in the Ovi Store on Nokia touchscreen devices, and we know that many people want the app for their non-touch devices. We’re expecting this launch to put us well past the one million downloads mark – in very short order,” said Richard French, chief executive officer, Syntonetic. “This is just the beginning for Syntonetic and for Playlist DJ. We have many enhancements planned for the near future, and we’re looking forward to working with Nokia to make them a reality.”

Our Demo of the PlaylistDJ app from Nokia World 2009.

The app is free to download and is supported by ads. Surely worth a try if you want a DJ on your phone !