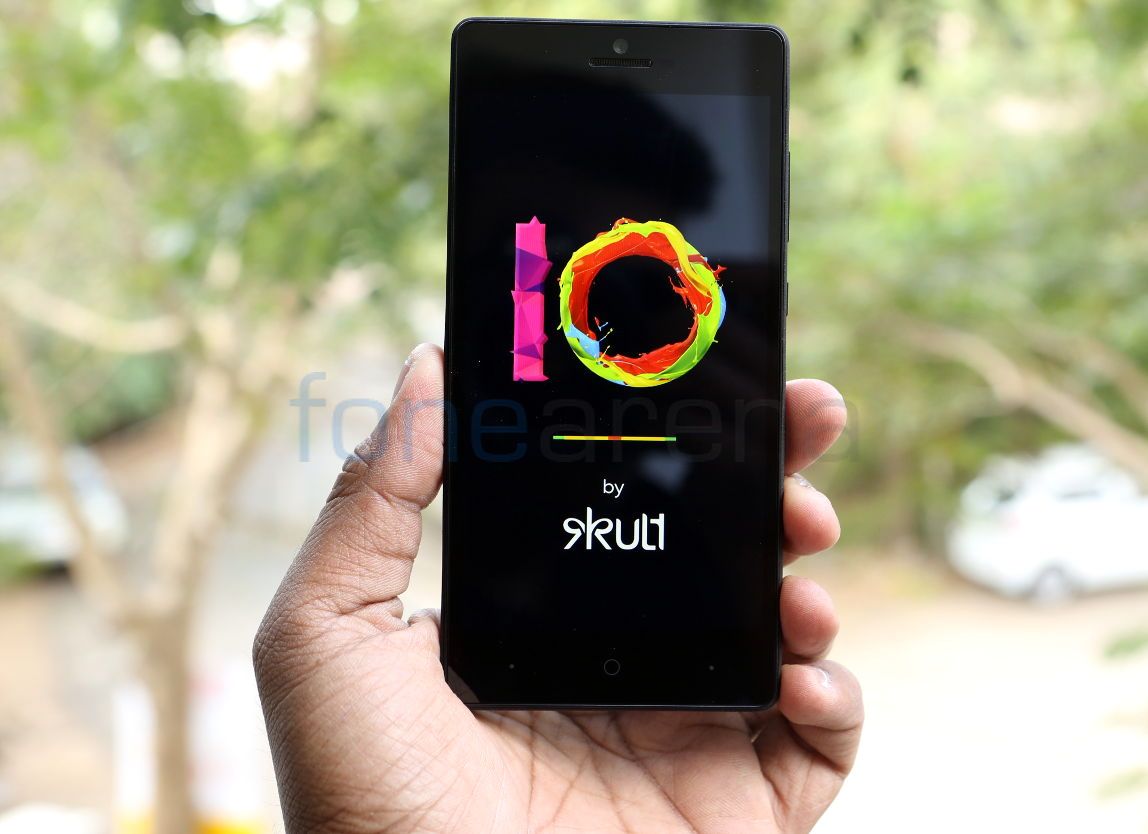 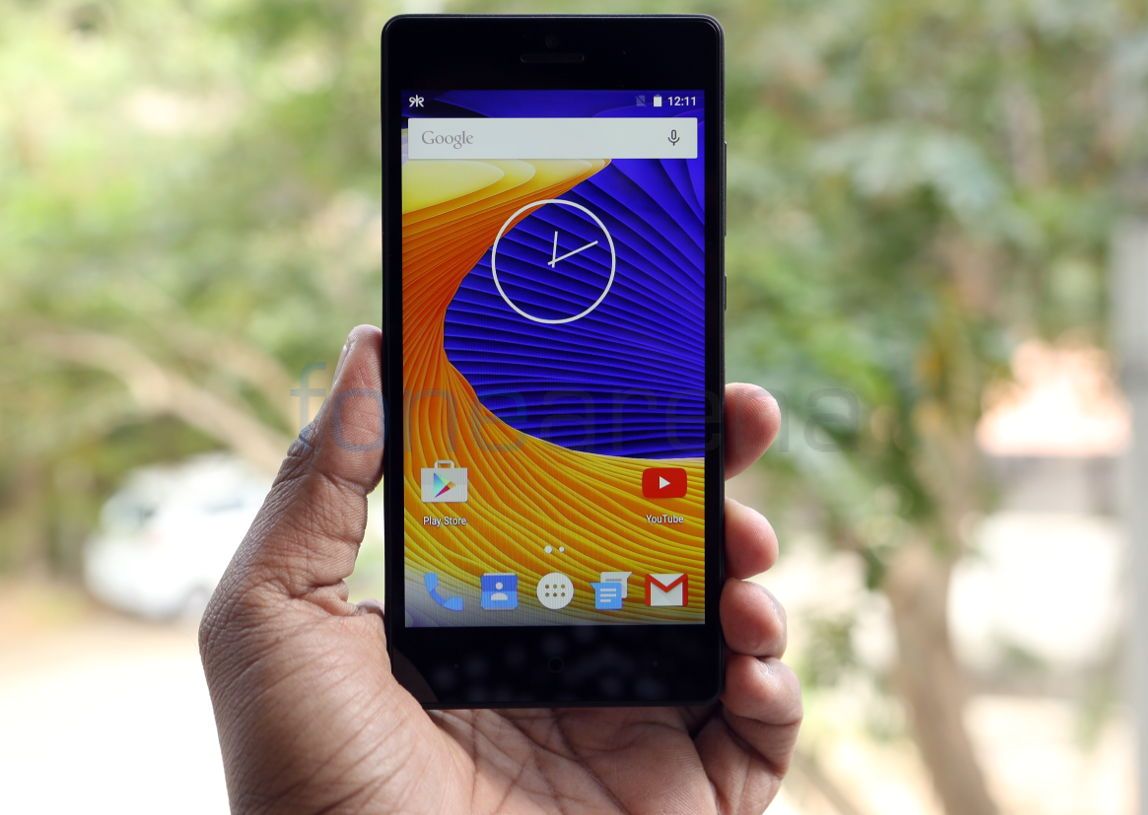 Kult, a new entrant in the Indian smartphone market launched the Kult 10 smartphone last month at a competitive price tag of Rs. 7,999. It has 3GB of RAM, which is the main highlight of the smartphone. Is the smartphone worth the price? Let is find out in the complete review. 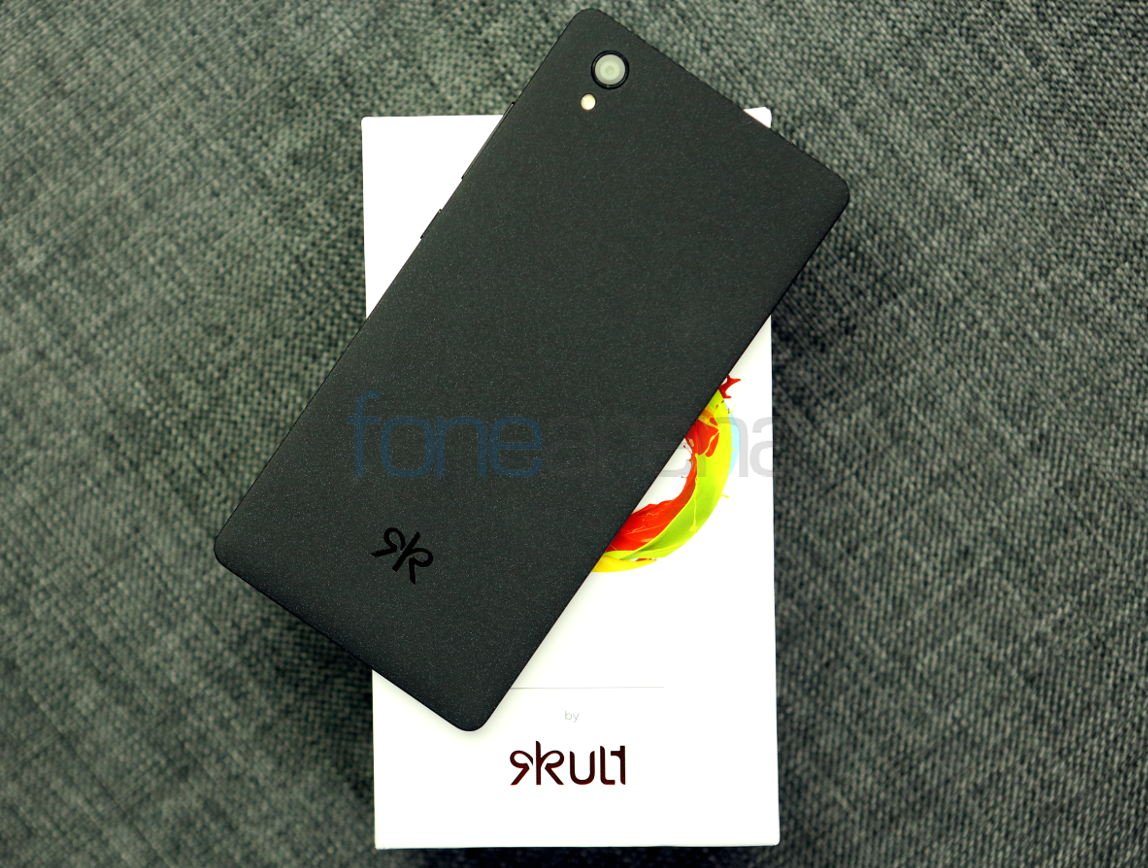 We unboxed the Kult 10 smartphone recently, check out the video below. 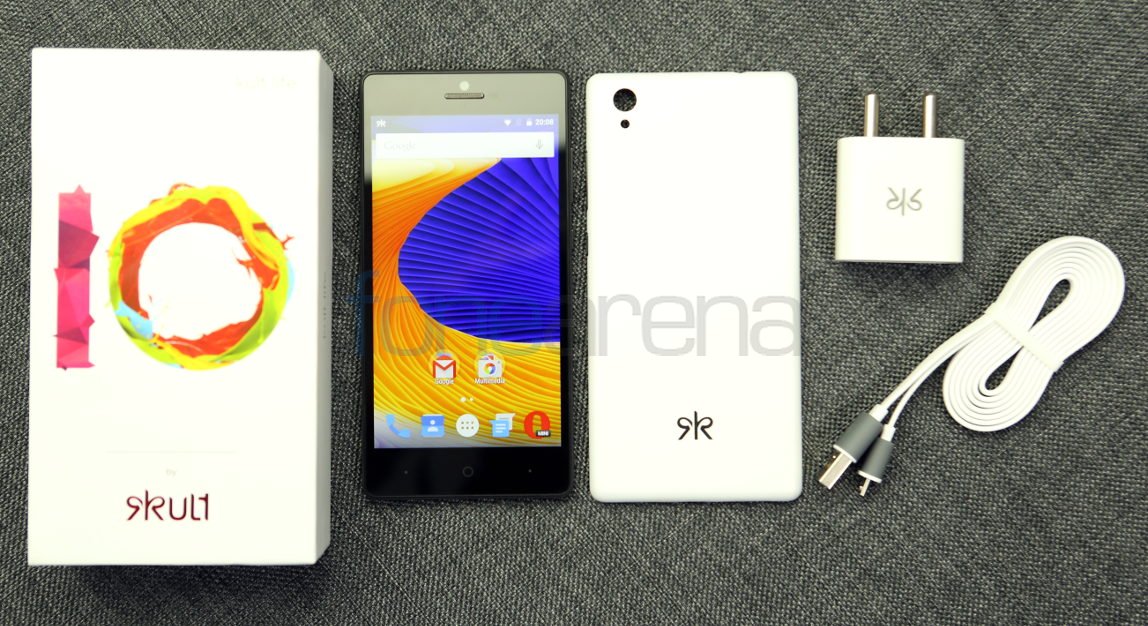 The phone has a 5-inch display with a resolution of 1280 x 720 pixels and a pixel density of about 294 ppi (pixels per inch). The display is bright, colors are vibrant, has decent viewing angles and the sunlight legibility is good too. It also has Asahi Dragon trail Glass protection. Overall the display is good for the price. 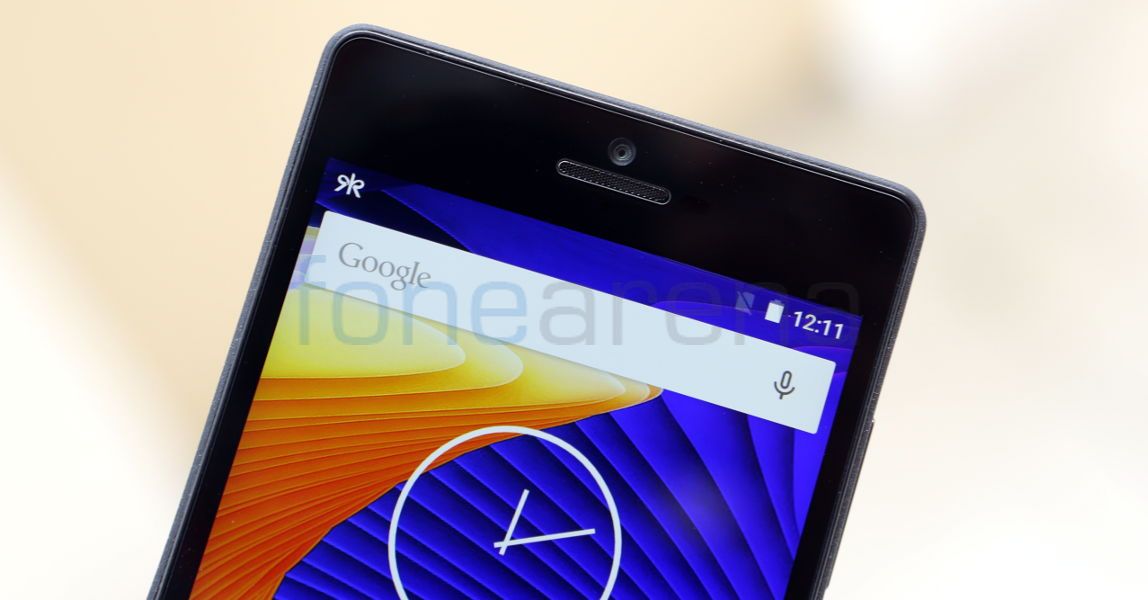 There is an earpiece in the center and the usual set of proximity and ambient light sensors. It has a 5-megapixel front-facing camera with f/2.8 aperture above the earpiece. The camera is good for selfies and video chats. It even has a notification LED below the earpiece that glows in red color. 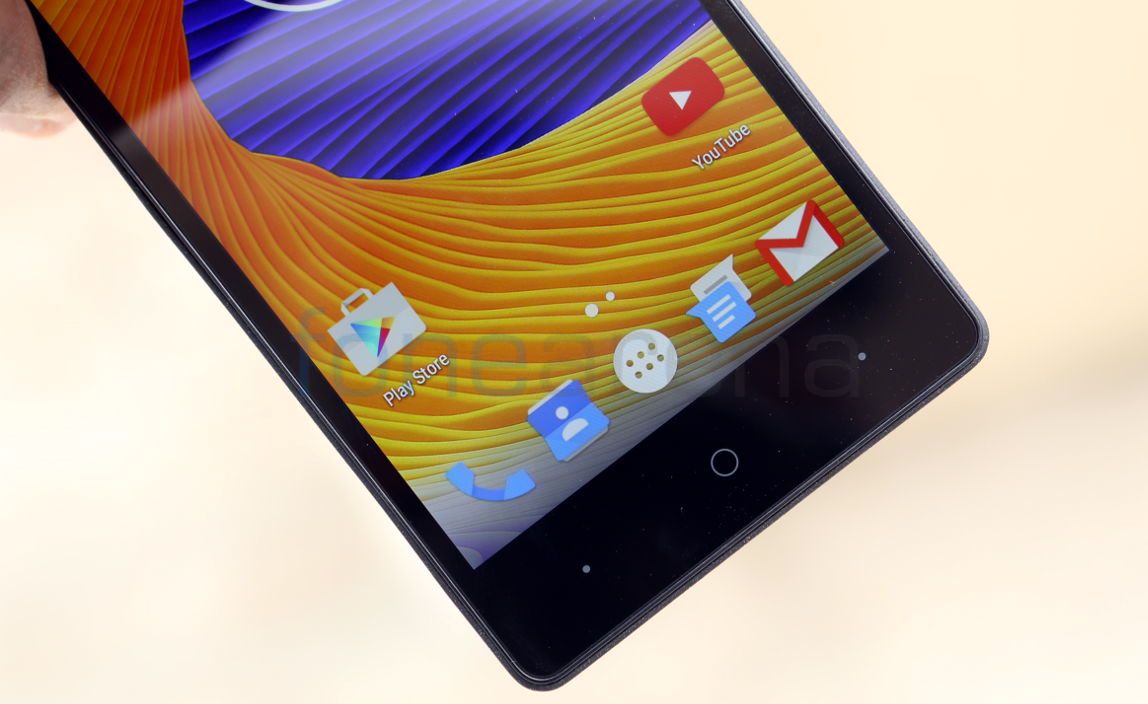 It has capacitive touch buttons below the display. These are not backlit, but offer haptic feedback when pressed. 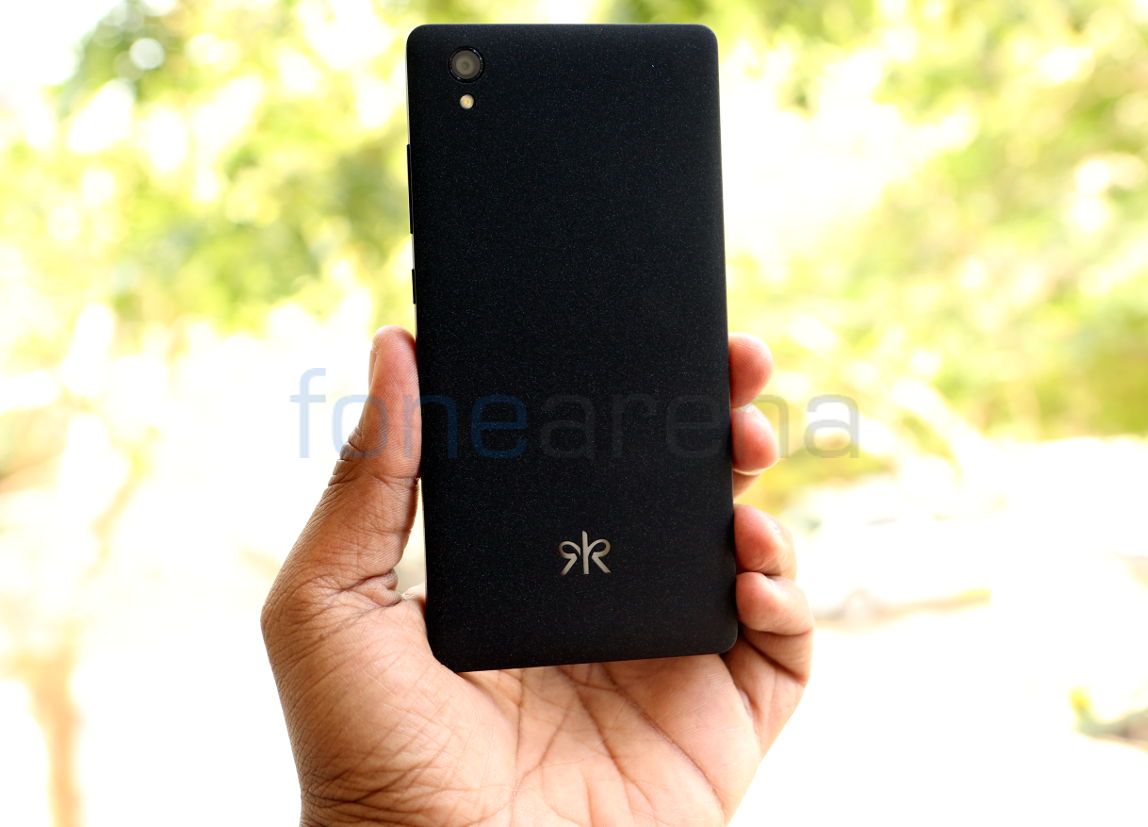 There is a 13-megapixel camera on the back with single LED flash. The phone comes with a black colored back cover which has rough feel to it, just like the Sandstone finish on the OnePlus One smartphone. 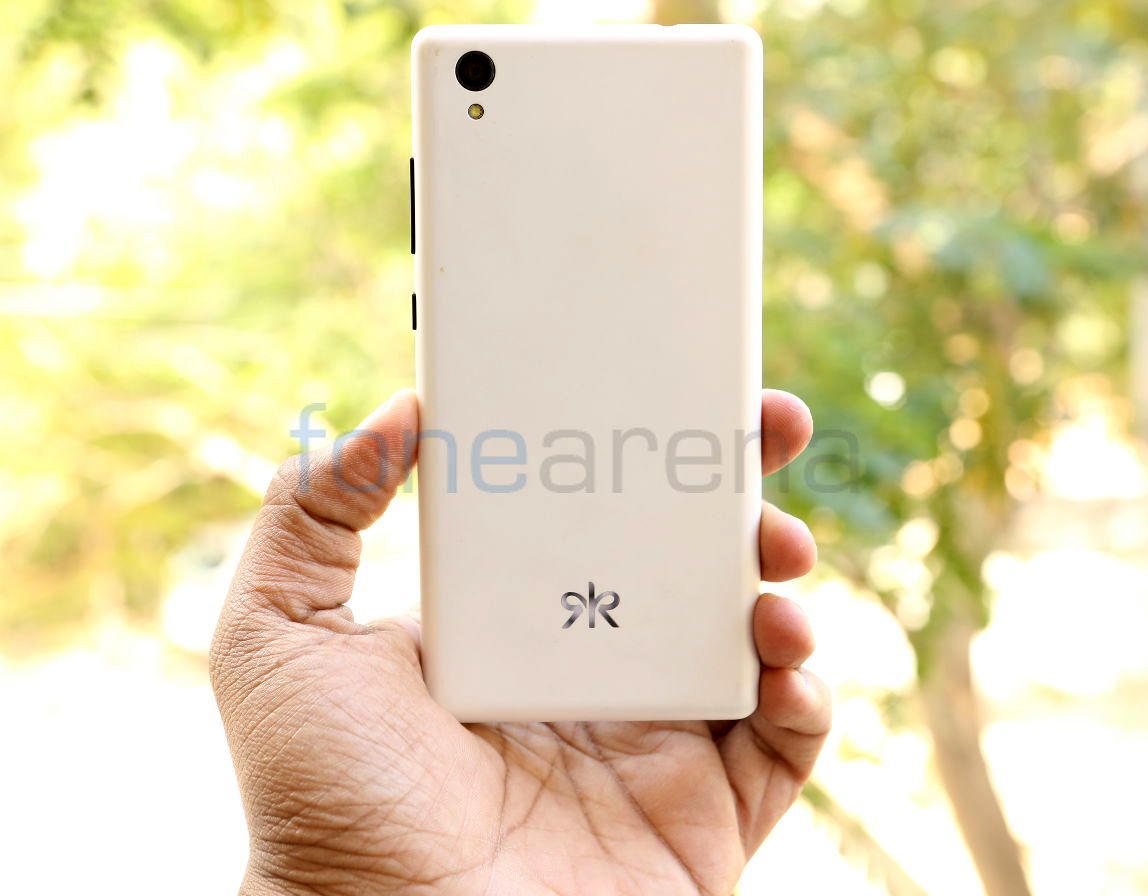 It also comes with a white colored back cover in the box. This has a smooth finish, but it gets scratched easily and attracts dust. It is 7.6mm thick and weighs just 128 grams. Since it is just 70.3mm wide, it is easy to hold. 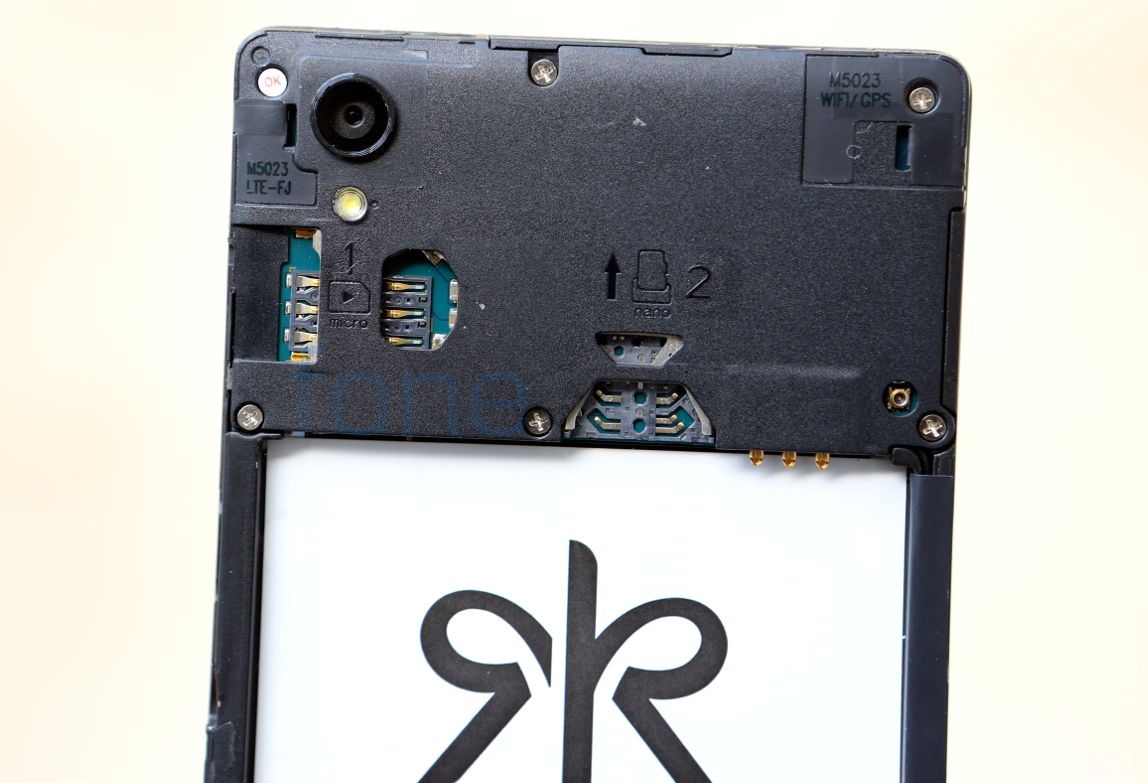 Opening the back cover reveals the micro SIM slot on the left side and a hybrid slot next to it that lets you use it as a nano SIM slot or a microSD slot. 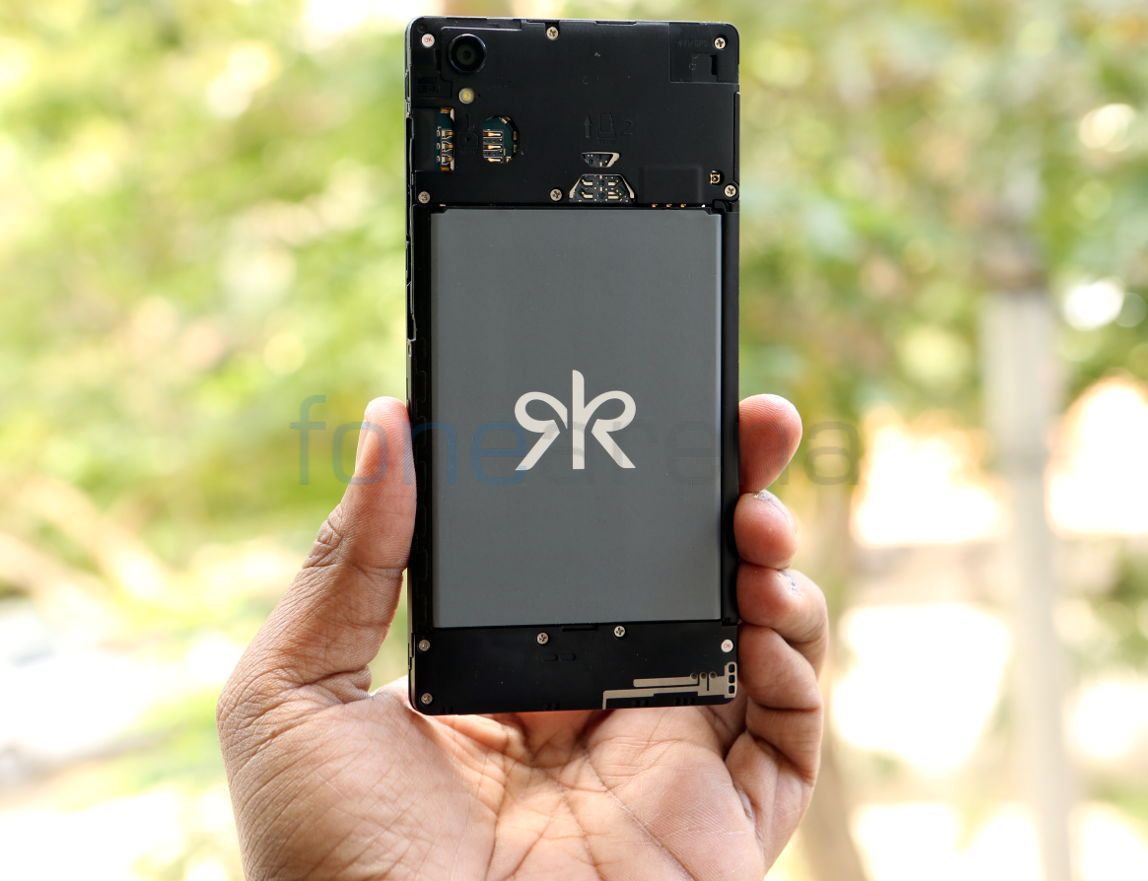 It packs a 2350mAh removable battery. Overall the build quality of the smartphone is good for the price. 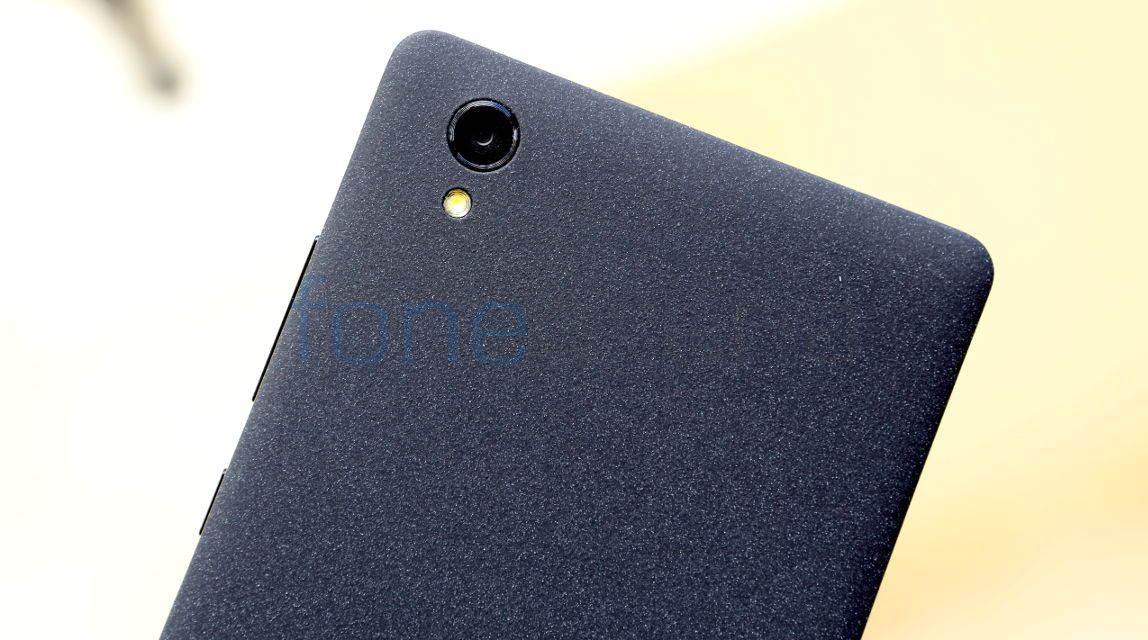 Daylight shots are good, but it doesn’t focus properly to capture macro shots, even though it has PDAF support. HDR shots are too sharp, and comes out blurry even if there is a slight shake. Low-light images have a lot of noise and the flash is overpowering. Even though the camera on the Kult 10 is decent for the price, it is just average for a 13-megapixel shooter. 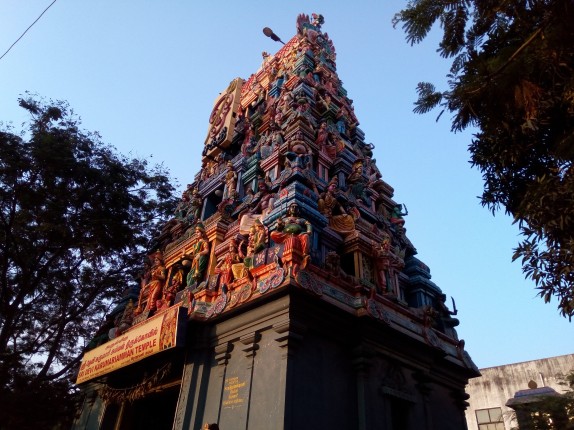 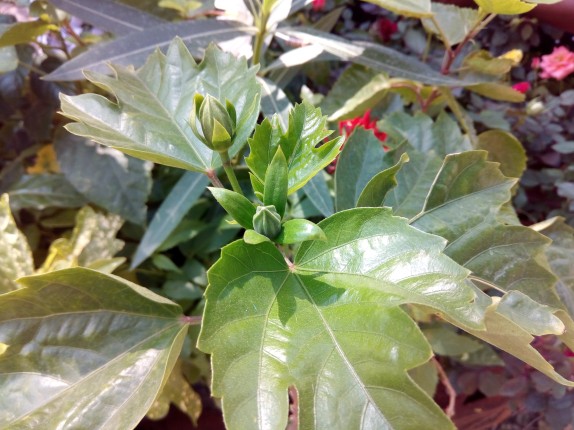 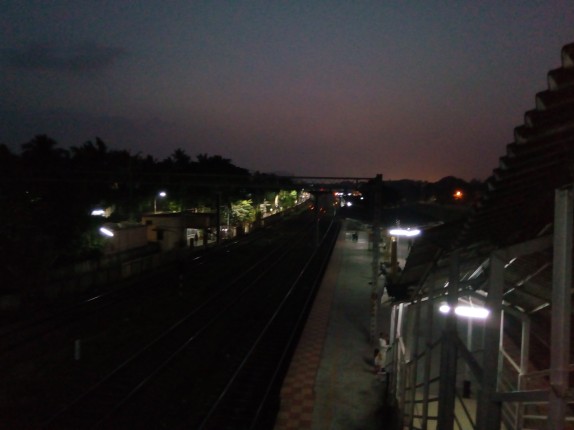 Check out the complete set of Kult 10 camera samples here. It can record videos at 1080p resolution at 30fps. Video quality is just average and doesn’t have much details for a 13-megapixel sensor. Videos are saved in .3gp format and not .mp4. Audio is not crisp since is lacks a secondary microphone. Check out the full HD video sample. 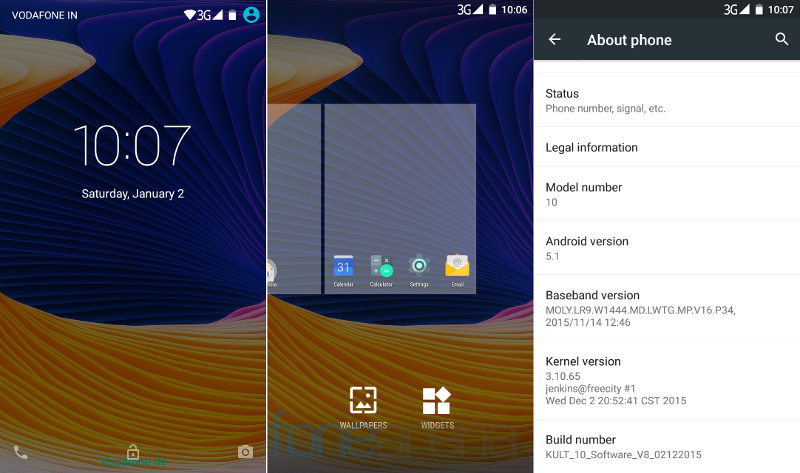 Coming to the software, it runs on Android 5.1 (Lollipop), which is almost stock with few visual changes. The company has promised Android 6.0 (Marshmallow) for the smartphone, but it doesn’t say when it will roll out. The homescreen looks almost similar to the Google Now screen, but it doesn’t launch Google Now on swiping to the left. You can launch the dialer or camera directly from the lock screen. 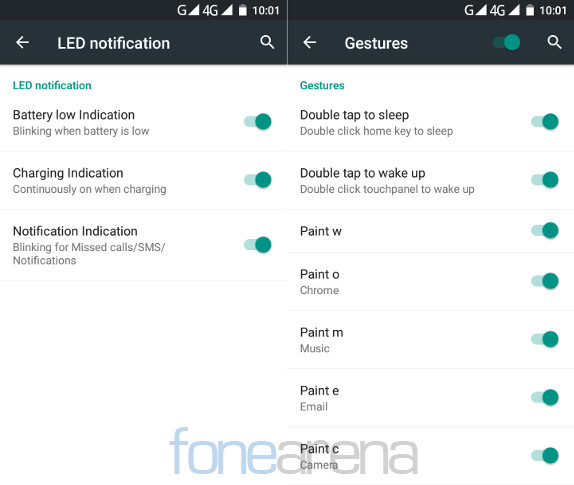 It lets you enable LED notification for battery low indication, charging and for notification. There are some gesture features such as option to double tap the home key to sleep, double-click the screen to wake up and draw characters on the lock-screen to launch apps. 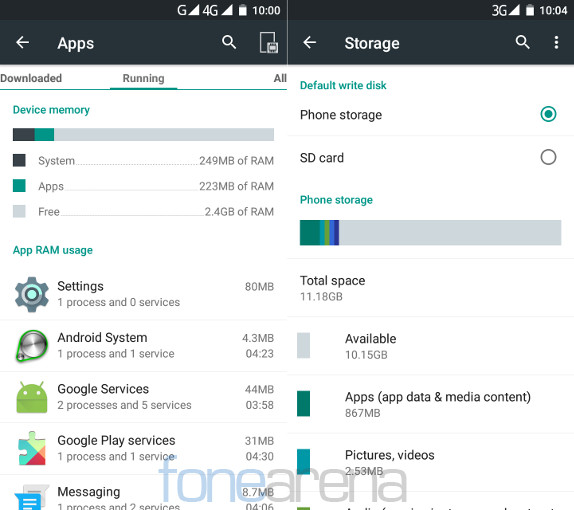 Out of 3GB of RAM, you get 2.93GB of usable RAM. About 2.4GB of RAM is free when the phone is idle, with default apps running in the background. Out of 16GB of internal storage you get just 10.1GB of usable storage that can be used for installing apps and for mass storage. You can set the SD card as the default write disk, but you can’t move apps to the SD card. 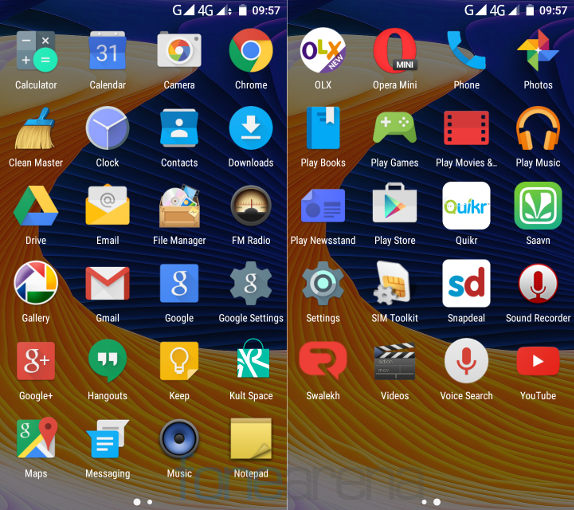 Apart from the usual set of Utility apps and Google apps the smartphone comes with several pre-loaded apps such as Kult Space, OLX, Opera Mini, Quikr, Saavn, Snapdeal and Swalekh. Pre-installing these bloatware is a bad idea on a smartphone with hybrid storage option. 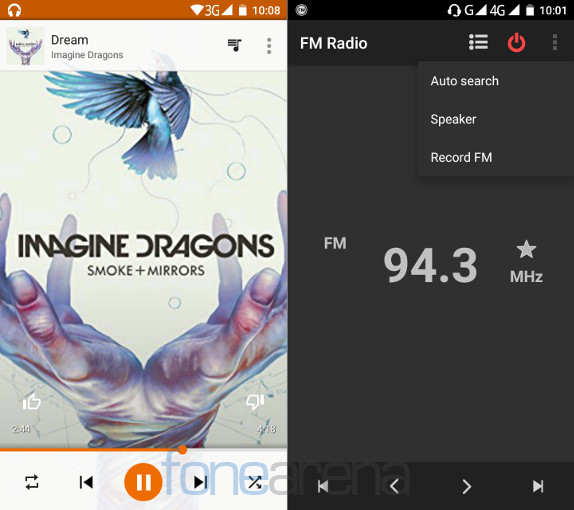 Google Play music is the default music player that can play different audio formats and the phone has FM Radio with auto search and recording. It doesn’t come with a headset in the box. Audio through third-party headphones is average and audio through the loudspeaker is below average. It is not loud even at full volume. The default video player can play videos at full HD 1080p resolution smoothly. 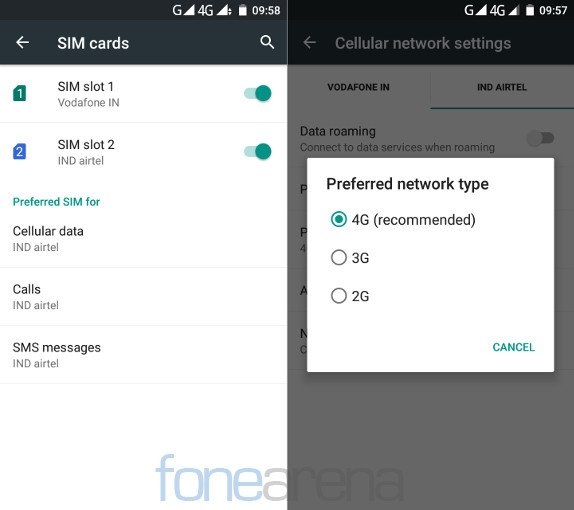 It has the usual set of connectivity features such as WiFi 802.11 b/g/n, Bluetooth 4.0 and GPS. It has 4G connectivity with support for TD-LTE 2300MHz (Band 40) and FDD-LTE 1800MHz (Band 3) for India. Both the SIMs support 4G, but you can enable 4G only in one SIM at a time, while the other goes to 2G. We did not face any call drops or any other calling issues. It also has USB on-the-go (OTG) support so that you can connect OTG drives easily. 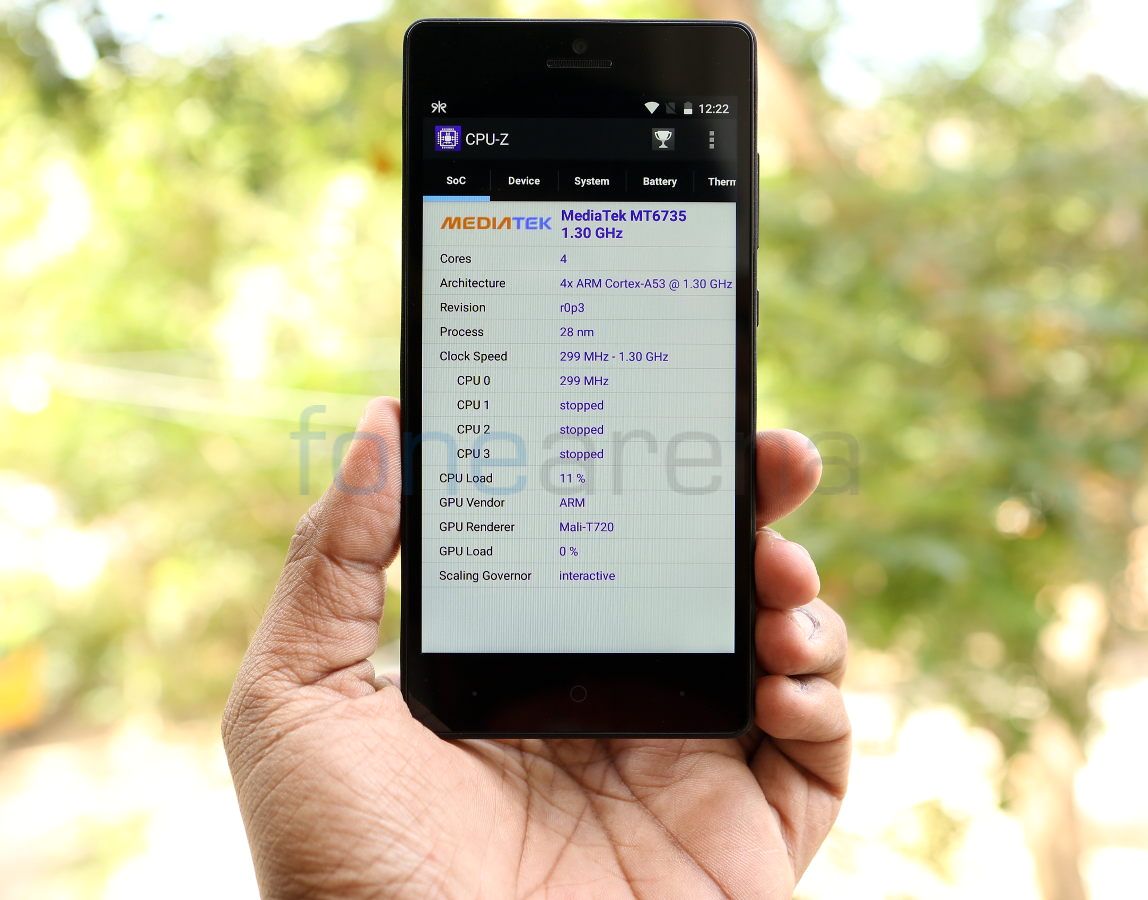 Coming to the performance, the smartphone has MediaTek MT6735 64-bit SoC with four ARM Cortex-A53 CPUs each clocked at 1.3 GHz per core. The performance is good and there are no lags. 3GB of RAM is enough to run several apps in the background. It doesn’t have any heating issues even when using 4G or during intensive gaming. Check out some synthetic benchmark scores below. 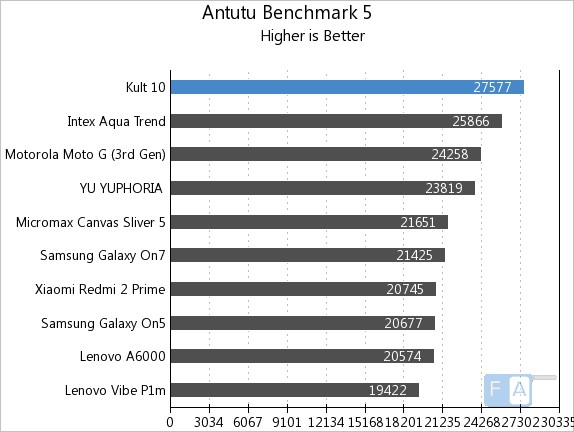 It topped the AnTuTu Benchmark 5 by scoring 27577 points. 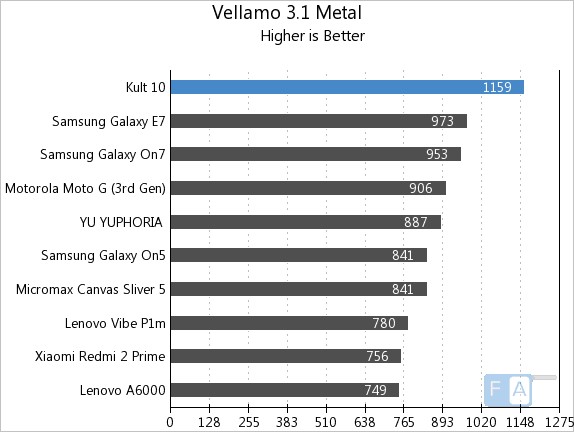 It scored 1159 points in the Vellamo 3.1 Metal CPU subsystem performance test and topped the benchmark as well. 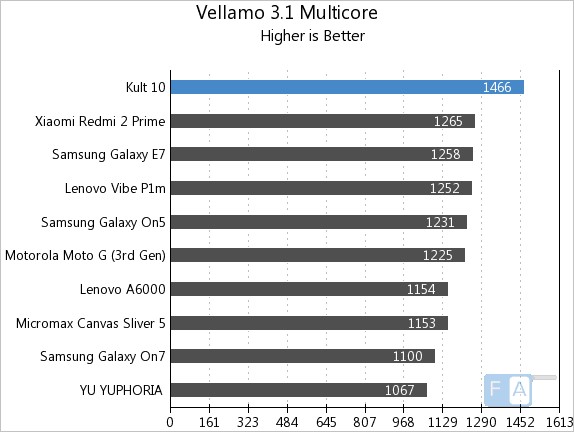 It scored 1466 points in the Vellamo 3.1 multicore benchmark. 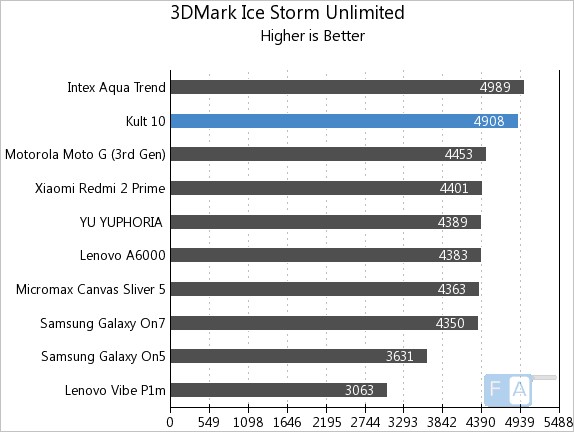 It scored 4908 points in the 3DMark Ice Storm Unlimited GPU benchmark and grabs the second spot, behind the Intex Aqua Trend. 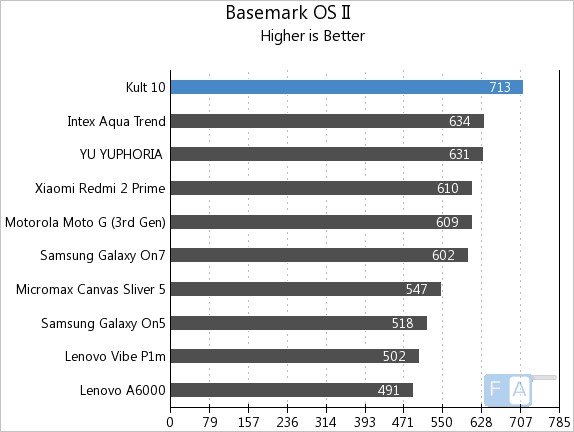 It scored 713 points in the Basemark OS II benchmark.  Check out the complete set of Kult 10 benchmarks here. It has 450MHz Mali-T720 MP2 GPU. The gaming performance is decent with average graphics. Some games didn’t perform well and did lag, but games like Asphalt 8 and Riptide GP2 were good. It doesn’t support PS3 or other USB controllers, but Bluetooth controllers work fine. 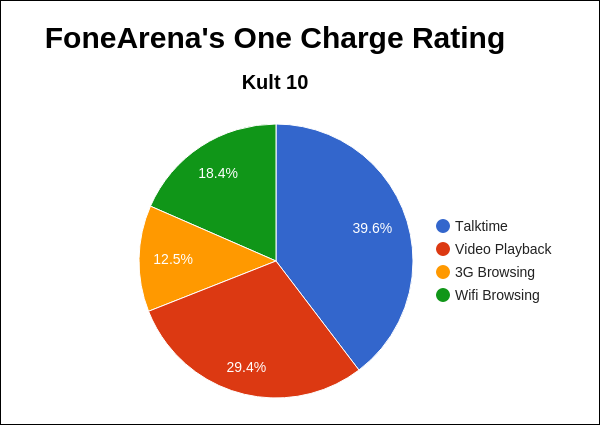 The 2350mAh battery runs out of juice by the evening even with average use that includes some music playback, an hour of 4G usage, few images and some gaming. It has standby intelligent power saving mode that lets you save the battery by reducing the device’s performance when the phone is not in use. It achieved One Charge rating of just 6 hours and 58 minutes, mainly due to brilliant talk time. Otherwise the battery life is average. Check out the complete set of Kult 10 battery test results here.

At a price tag of Rs. 7,999, the Kult 10 is a decent smartphone, but it still faces a tough competition from other competitors such as Yu Yuphoria, Lenovo Vibe P1m and others.The performance is good and it has 3GB of RAM, but the phone has a hybrid SIM slot, camera and the battery life are just average.

The smartphone is only available through on Snapdeal, which is common these days. It has also partnered with Mobiliti World Store so that people can get a hands on experience in some cities before buying it. Even though the company is a new entrant in India, it has over 500 service centers across India in partnership with Telecare. To summarize, here are the pros and cons of the smartphone.