Twitter has been taking measures to combat abuse on its platform throughout this year. The micro-blogging site has now updated its rules to tackle abusive behavior and hateful content. 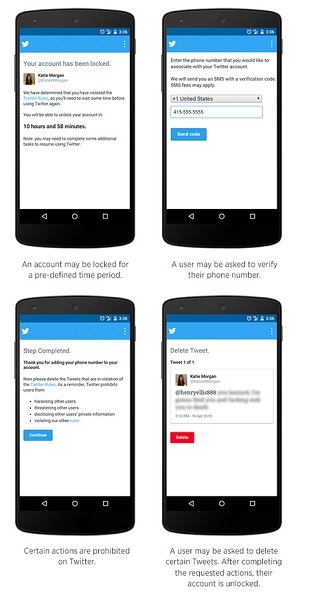 The updated policies add more specifics on what types of actions can result in suspended accounts. In addition to allowing users to block or mute other accounts that are abusive, Twitter can also ask offending users to delete their tweets if they are found violating the company’s rules.With the addition of new policies, Twitter users are not allowed to make violent threats, share another user’s personal information; harass and impersonate someone; misuse multiple accounts and encouraging others to self-harm. If users do not comply, the company can lock a user out of their account altogether.

“The updated language emphasizes that Twitter will not tolerate behavior intended to harass, intimidate, or use fear to silence another user’s voice. As always, we embrace and encourage diverse opinions and beliefs –but we will continue to take action on accounts that cross the line into abuse.”

In April this year, Twitter updated its policies to control online abuse and violent threats and July it introduced a Safety Center to handle online abuse easily. It also added new tools to share block lists.