Four homegrown smartphone makers viz, Micromax, Celkon, Karbonn and Lava have come together to set up units at the country’s first mobile manufacturing hub to join the ‘Make in India’ movement. 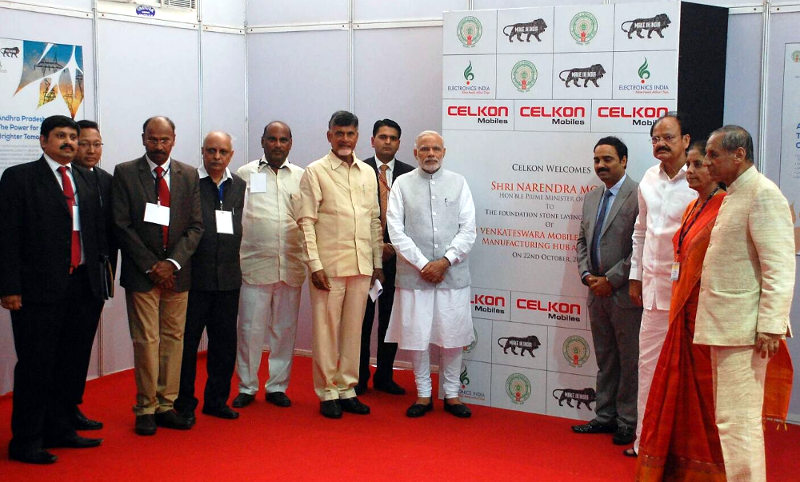 The Sri Venkateshwara Mobile and Electronics Manufacturing hub will be coming up in Tirupati and foundation stone for the same was laid by Prime Minister Narendra Modi yesterday. The four aforementioned companies will set up their units at the 122-acre electronics manufacturing hub where Celkon will get 20 acres, Micromax 15 acres, Karbonn 15.28 acres and Lava 20 acres in this Hub. All the 4 companies together are targeted to produce more than 7 crore mobile handsets per annum.

All the four companies will invest ₹2,000 crore in phases in the 120-acre hub located near Renigunta airport, Chittoor district. Over 45,000 direct & indirect jobs will be created through the Electronics Manufacturing Cluster (EMC). The hub will also house all the players in the ecosystem that includes manufacturers of earphones and adopters. Celkon stated that it targets to start production from this plant within six months from now and smartphones and tablet pc are going to major products to be made in this facility. The company has already started manufacturing of mobile phones at Medchal unit in Hyderabad since June this year.

OnePlus, Asus, Coolpad, Vivo, Videocon, HTC, Sony, Microsoft, LG, Lenovo, Motorola, Xiaomi, Gionee, are some of the international smartphone makers that have announced their plans to kick start manufacturing of smartphones in India.

[Update] – Lava has announced that it will invest Rs 500 cr for the manufacturing plant which will be operational in 2017. It will target production capacity of five million phones a month once fully functional.