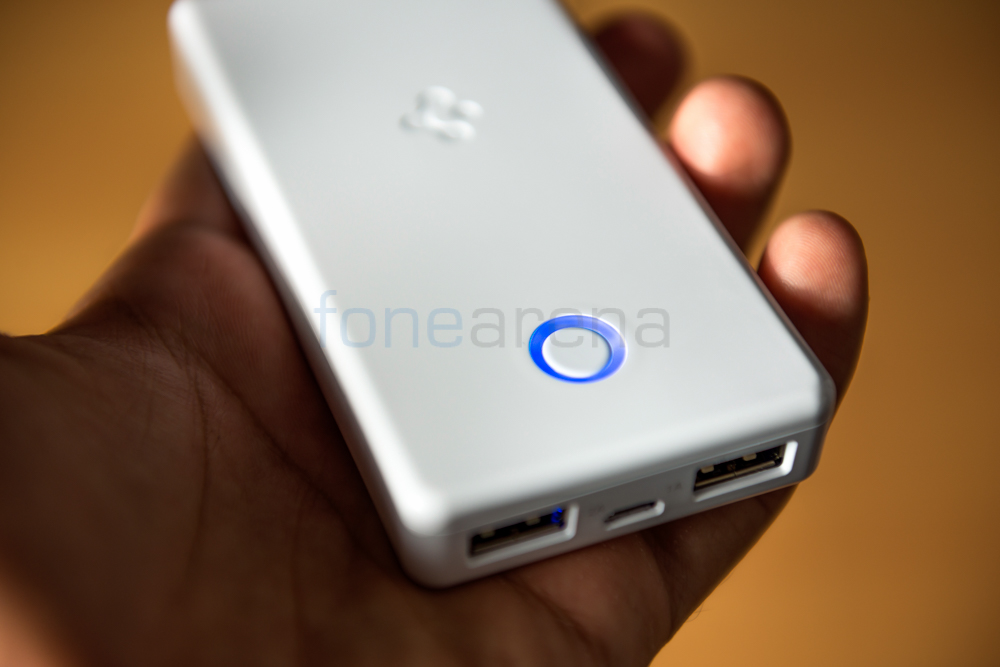 We’ve seen portable chargers with large capacities and Dual USB ports or fast charging portable battery packs as well. But not often do we come across a portable battery pack that offers a fairly large capacity with Dual USB ports and quick charging. That is exactly what the Spigen F70Q offers. It has a fairly large 7000mAH capacity as well as two USB ports that support fast charging. Let’s dive in to the review to see what exactly the F70Q offers and whether it is a good bang for your buck.

What’s in the box?

We haven’t done an unboxing of the fast charger as there isn’t much to go on like any other battery pack package. Listed below are the contents of the box: 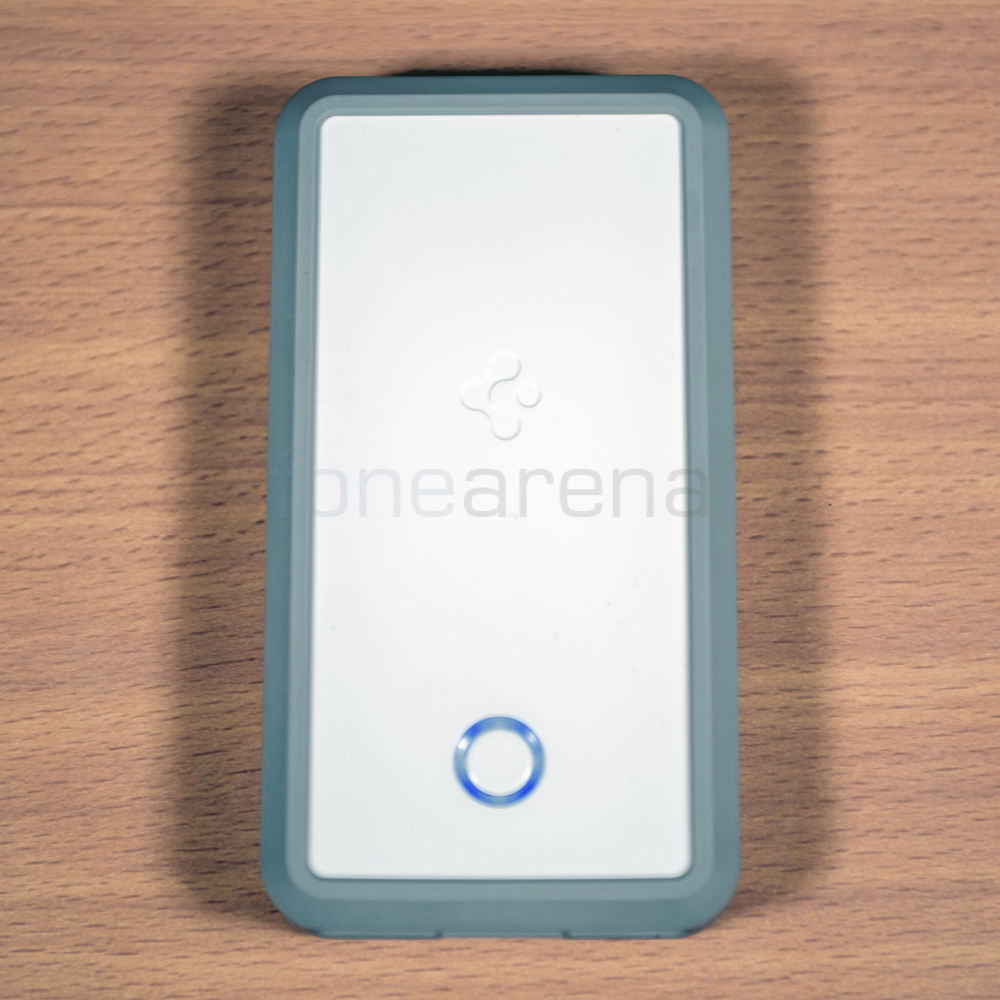 The first thing you’d notice about the F70Q is the rubberised back and sides. However don’t be fooled into thinking that this is the actual charger itself since it is merely a protective case that Spigen has included for the battery pack. It is something that we really liked. Not many manufacturers offer protection for their power banks and even if they do, it is more often for scratch protection rather than protection against drops and odds are you have to purchase it separately. Spigen have included a very rugged case for the battery pack that improves the handling due to the rubberised matte texture and is capable of absorbing impacts and also protecting your device from scratches. It uses the same Air Cushion technology as their Tough Armor series of cases so you know that it can take a beating. 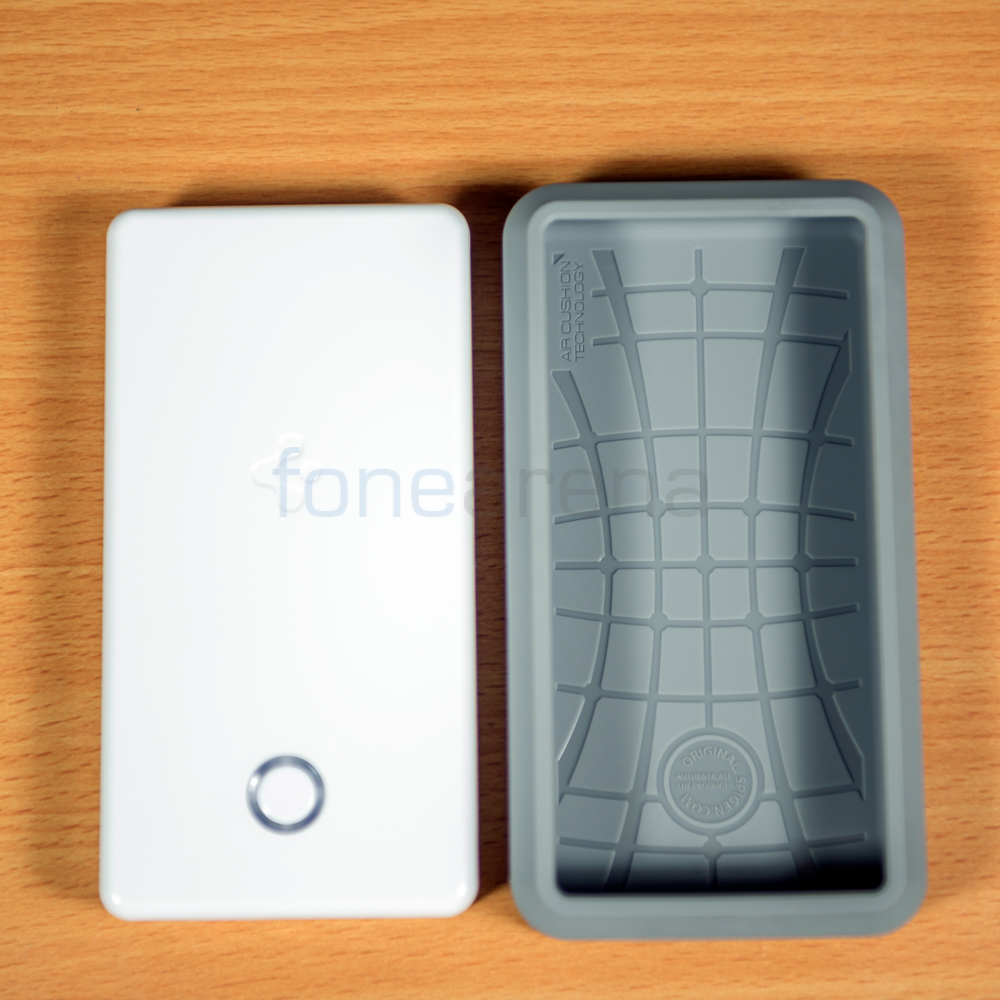 Once you remove the casing, you’ll see the actual battery pack which still is fairly big compared to the recent Asus or Mi chargers. But it isn’t too big to cause frustration and the smooth white paint feels good in the hands. Not to mention the curved edges really do improve the handling. Most battery packs from Asus or Mi have sharp edges however the Spigen F70Q like the OnePlus battery pack has quite nice curved edges which make it easy to handle. The build quality is quite good and the device doesn’t feel too heavy. We feel perhaps the size could’ve been made smaller a bit but perhaps the fast charging capability is what limited them from doing so. 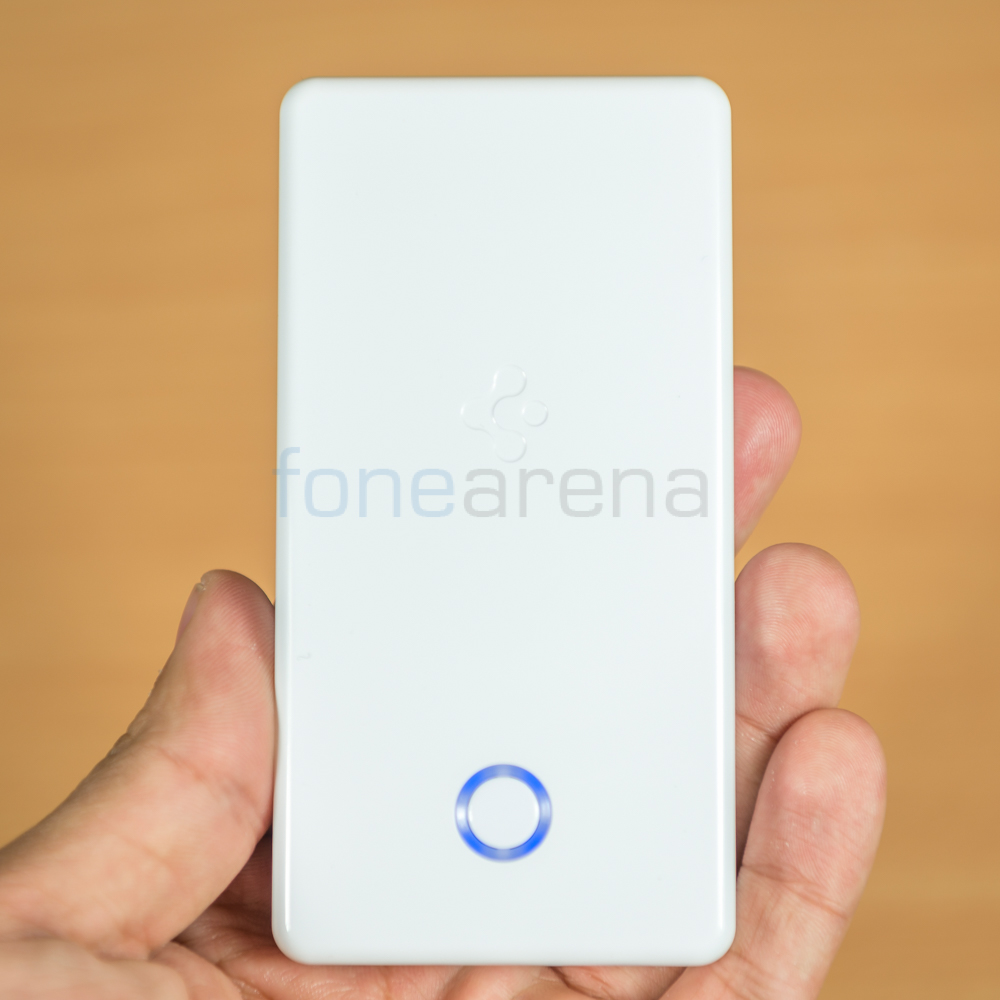 The battery pack looks quite minimalistic and contemporary. At the front, you have the Spigen logo below which you have the power button which is surrounded by 4 LED lights. While we do like how the cool blue LED ring looks around the power button, we felt that having separated LED lights makes it much easier to read the battery levels. However, you still get used to this in no time. The circle lights up in the shape of quadrants. A single quadrant means 25% charge, two quadrants mean 50% while 3 quadrants mean 75% and a complete circle means fully charged. If any number of quadrants are blinking then it means that the battery pack is either getting charged or is charging another device.

At the bottom, you have the 2 Amp USB port on the left and the 1 Amp USB port on the right. There is a microUSB port in the middle which can be used to charge the battery pack. There is only 1 colour available at the moment and that is white. We hope they introduce different colours for the battery pack and maybe even optional cases for it in different colours. The cable that comes with the F70Q is also in white and is of good quality. It is the C10m cable that is part of the sub-brand kuel series from Spigen.

The F70Q is smart and is able to shut itself off from the power source when being charged if it detects a voltage spike or when it has been fully charged. Similarly, it can also stop supplying power to the device/devices being charged once they are fully charged. All you have to do to start charging is plug in your device into one of the ports and press the power button. You can also press the power button without connecting any device if you want to check the battery level of the battery pack. 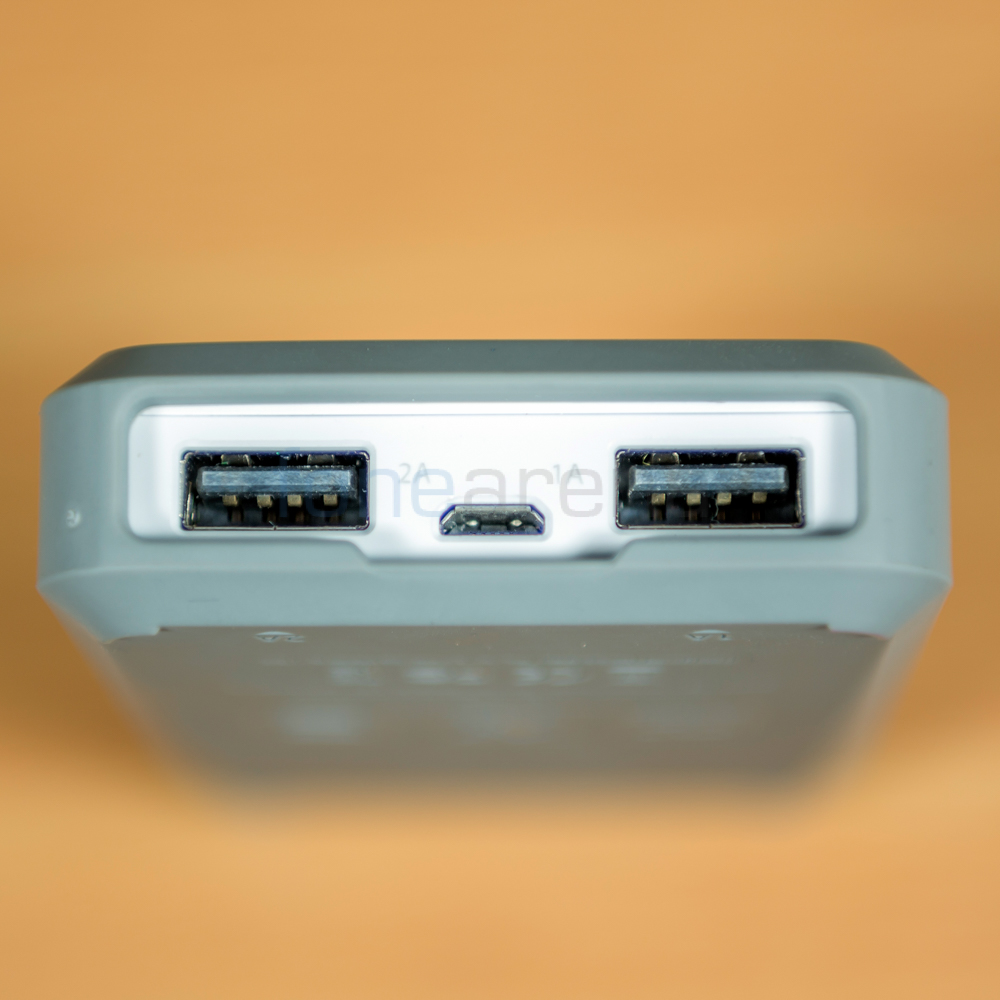 We tested the fast charging on several devices including the Galaxy S6 Edge which we will be using to explain further. On the S6 Edge we noticed that the battery pack was able to charge the device 60% in 60 minutes. That is using the 2A port and using a 1A port, we found that it takes around the same time as well. Perhaps like Spigen mentions That is quite fast compared to some battery packs we have tried but not the fastest on the market right now. However the issue with the F70Q isn’t the speeds with which it charges other device but the time it takes to recharge itself. The company states that it will take 15-20 hours to recharge the battery pack using a 0.5A regular USB connection and around 6-8 hours if you charge it using a wall adapter. That is stil quite slow and will mean you having to put the battery pack for charging overnight ideally. 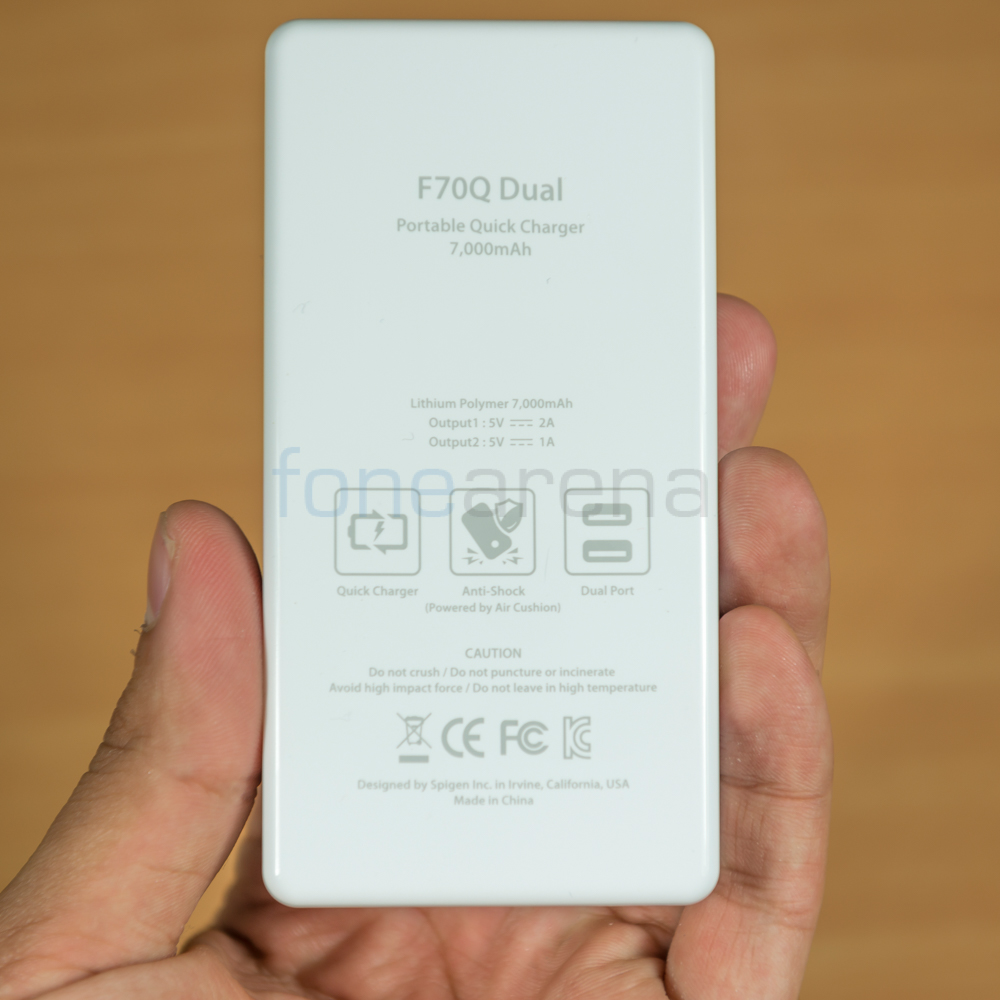 Spigen says that the charger can be used on iPads and iPhones as well and we were able to verify that it could. However they include only a microUSB cable within the box and their site doesn’t show us the option to choose from a microUSB cable or Lightning cable. So if you plan to use this on an Apple device, you would need to purchase a spare cable unless you are fine with using the one you have on your wall charger already. You can charge 2 devices simultaneously however considering the 7000 mAH capacity, it might not get you much out of it. This is true especially if you take tablets into consideration or if you own one of the smartphones with large capacity batteries.

The Spigen F70Q is a battery pack that seemed good on paper apart from the slightly smaller battery capacity and in real life it does perform quite well. However, it does fail to actually live up to its fast charging claim. While it does offer faster charging speeds than many other power banks out there, it still isn’t the fastest or as fast as battery packs that offer 2.4A fast charging. But apart from the fast charging, it still is a very good battery pack that is well protected and offers simultaneous dual USB charging. The design and the rugged case are two reasons why you probably may want to buy the battery pack. The battery pack costs GBP39.99 (Approx Rs 4170) and you can get it from MobileFun and they offer worldwide shipping.