Although, the Sony Xperia Z5 Compact has not gone official, the phone has been leaked in couple of images recently. Today, a new photo, which looks like a promotional shot of the Z5 Compact has surfaced. 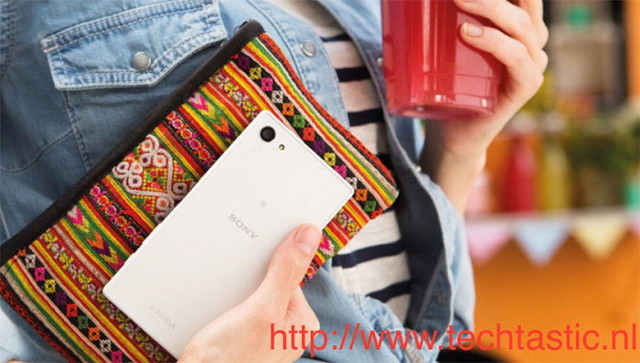 The promotional shot which alleges that it the Xperia Z5 Compact shows the back of the phone that is said to be made of glass. As stated earlier, we can see that there is a change in the side placement of the fingerprint scanner. Also, the power and volume buttons are shifted down than original location.

Sony is expected to announce the Xperia Z5 and Z5 Compact at IFA Berlin on September 2. The Z5 is expected to pack a Snapdragon 810 processor, 5.5″ full HD display, 3GB RAM, 32GB of storage and a microSD card slot. It should have a 20.7 Megapixel rear camera and an 8 megapixel front facing camera. Meanwhile, Z5 Compact will be a toned down version of the Z5. Earlier this week, it was reported that Sony will bring 4K X-Reality Pro image processing engine to the Xperia Z5 Plus.