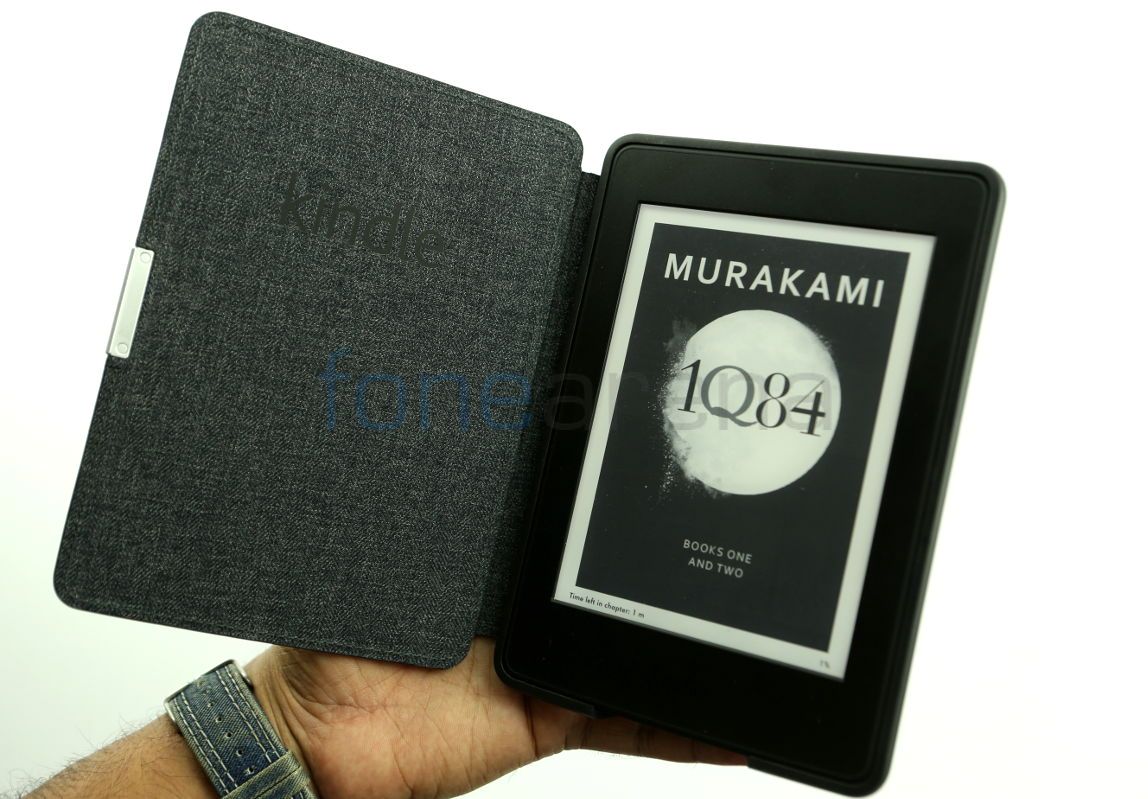 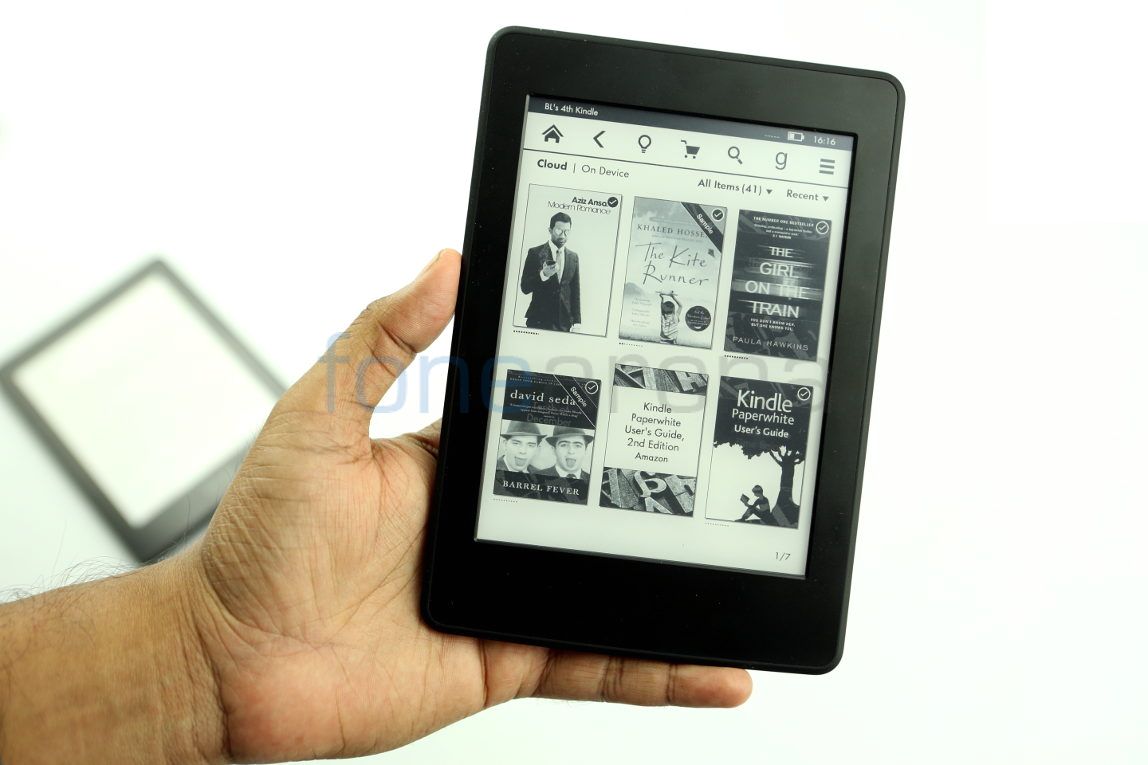 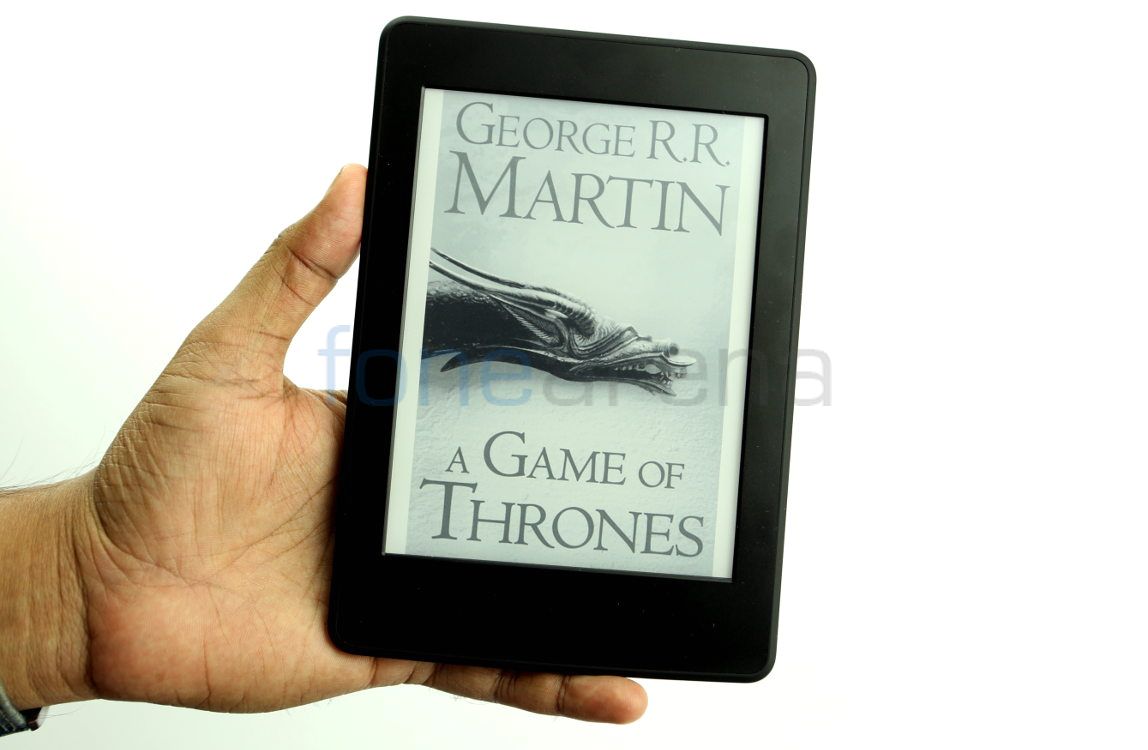 The new Kindle Paperwhite has a 6-inch touch screen display with a resolution of 1448 × 1072 pixels and a pixel density of 300 PPI, compared to the first and second-generation Paperwhite models with a 212 PPI screen. This is the same screen that is present in the Kindle Voyage that was launched in India earlier this year. The first thing you notice about the new Paperwhite is the sharp display, so that you don’t have to strain your eyes to read small text. It also has a built-in light similar to the earlier Paperwhite models to read in dark. This has been improved compared to the second-generation Paperwhite to offer more even light, so you don’t find any dark shadows from where the light comes. 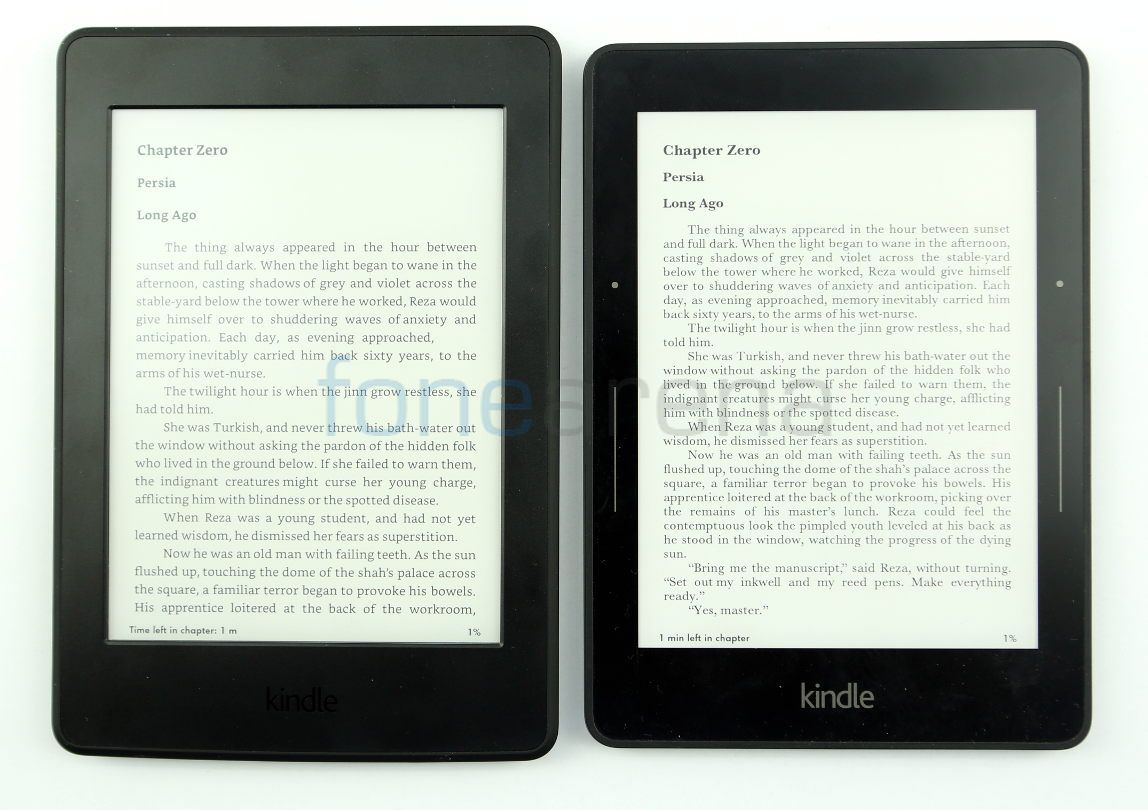 Since this is a front-lit screen, you can use it even in bright sunlight without any glare. The new Paperwhite has a slight yellow tinge, compared to blue tinge on the Kindle Voyage, which is visible clearly when reading indoors in low brightness setting. As you can see in the image above, Brightness and sharpness are low in the Paperwhite compared to the Kindle Voyage, when the brightness level is set to 20 in both. 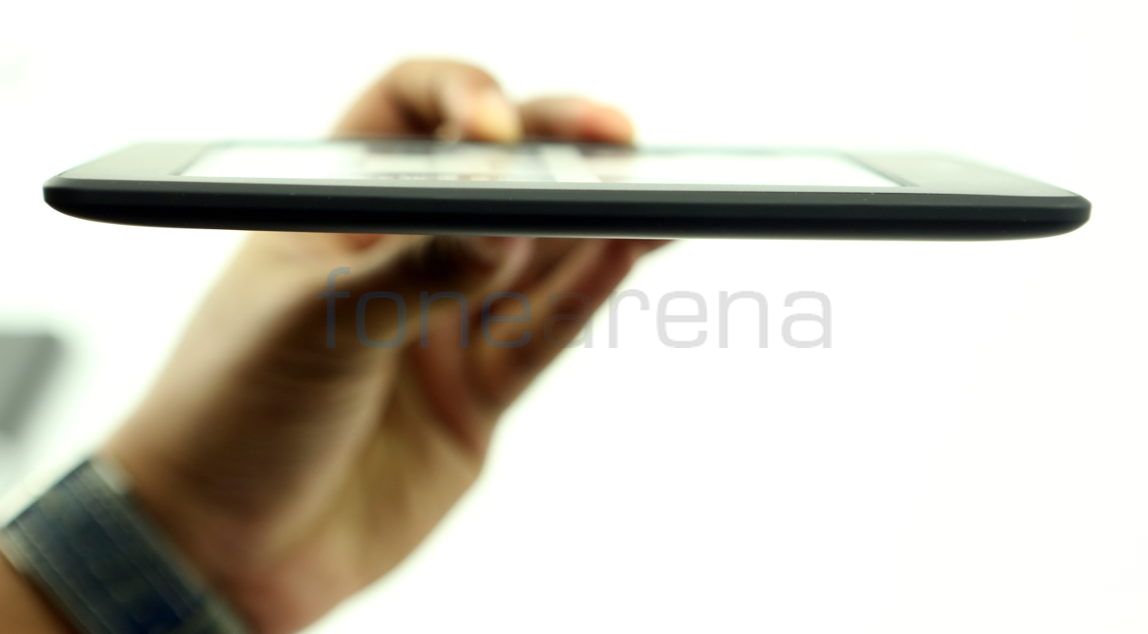 The new Kindle Paperwhite is 9.1 mm thick, exactly same as earlier Paperwhites. The WiFi and the 3G variants weigh 205g and 217 grams, almost similar to the second-generation Paperwhite.

It has a micro USB slot, a small LED indication that glows in orange when the Kindle is charging and in green when the charge is full. It also has a power button that is the only hardware button on the device. 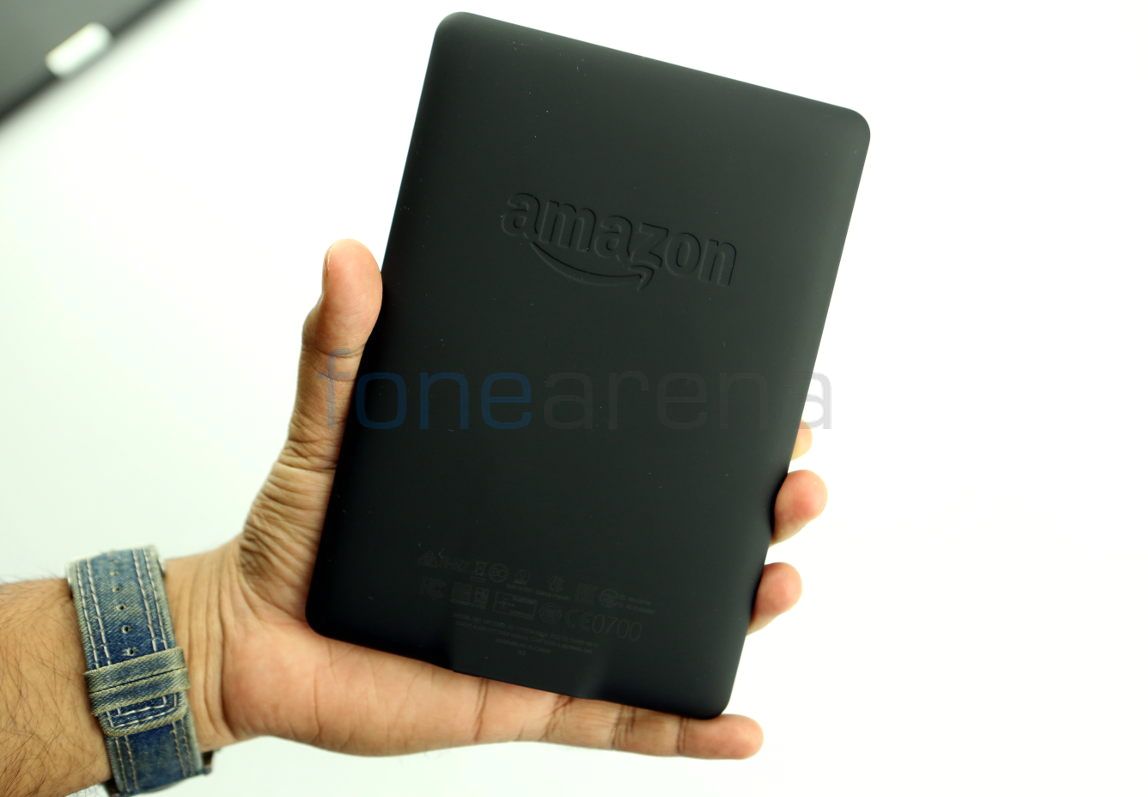 Amazon also sells the official Kindle Paperwhite leather cover for Rs. 2,399. Since the dimensions of all the Paperwhite models are the same, you can use the same cover for all the three. It has a magnetic latch, which puts the Kindle to sleep when it is closed and wakes up when it is opened. 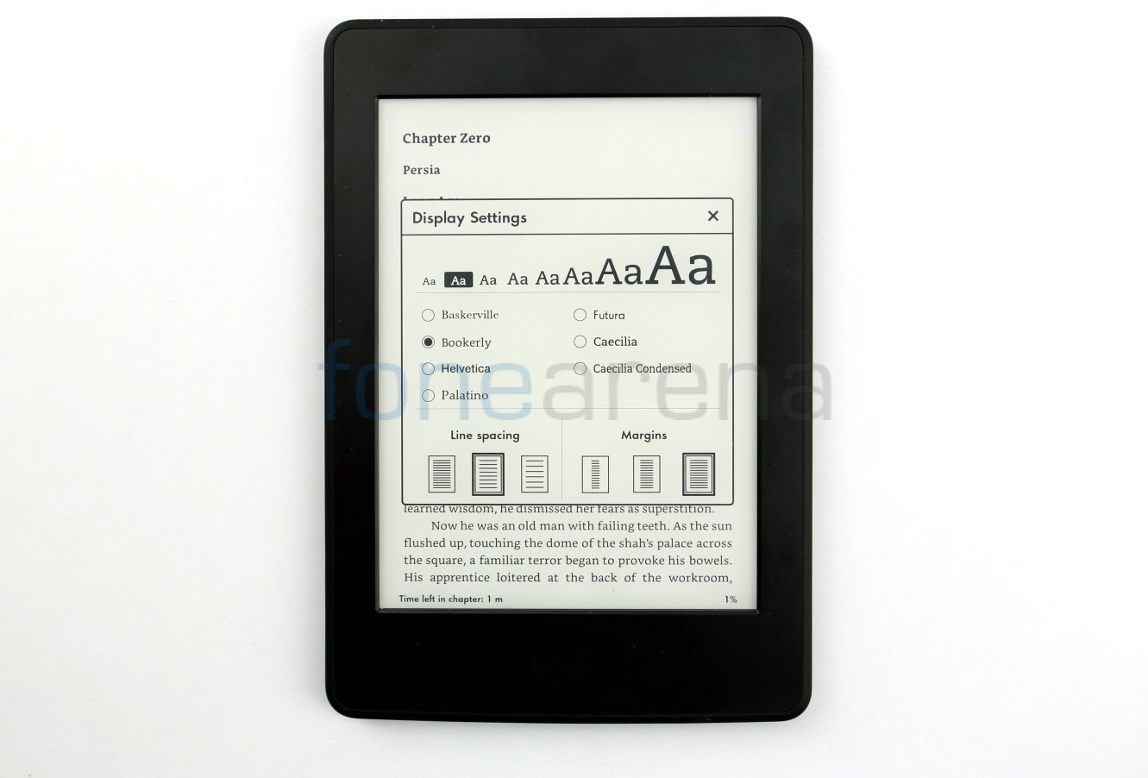 Coming to the software, the new Paperwhite brings new Bookerly typeface. Amazon says that this new font is designed exclusively for Kindle to make it look much closer to traditional print than to computer displays for enhanced readability. I usually use Baskerville typeface on Kindle Voyage, the new Bookerly typeface has better character spacing, justification, ligatures and more that helps to read more easily with less eyestrain. Bookerly is now available for other Kindles including, Voyage, 7th generation Kindle and Paperwhite (2014) through the latest software update. It also has the same Good Reads integration, Vocabulary Builder, Smart Lookup, X-Ray and more.

Amazon doesn’t say anything about the speed improvements in the latest Paperwhite, so it looks like this has the same processor and 512RAM present in the Kindle Voyage, since the performance it is on par with the Voyage in turning pages and searching content in books or the web. 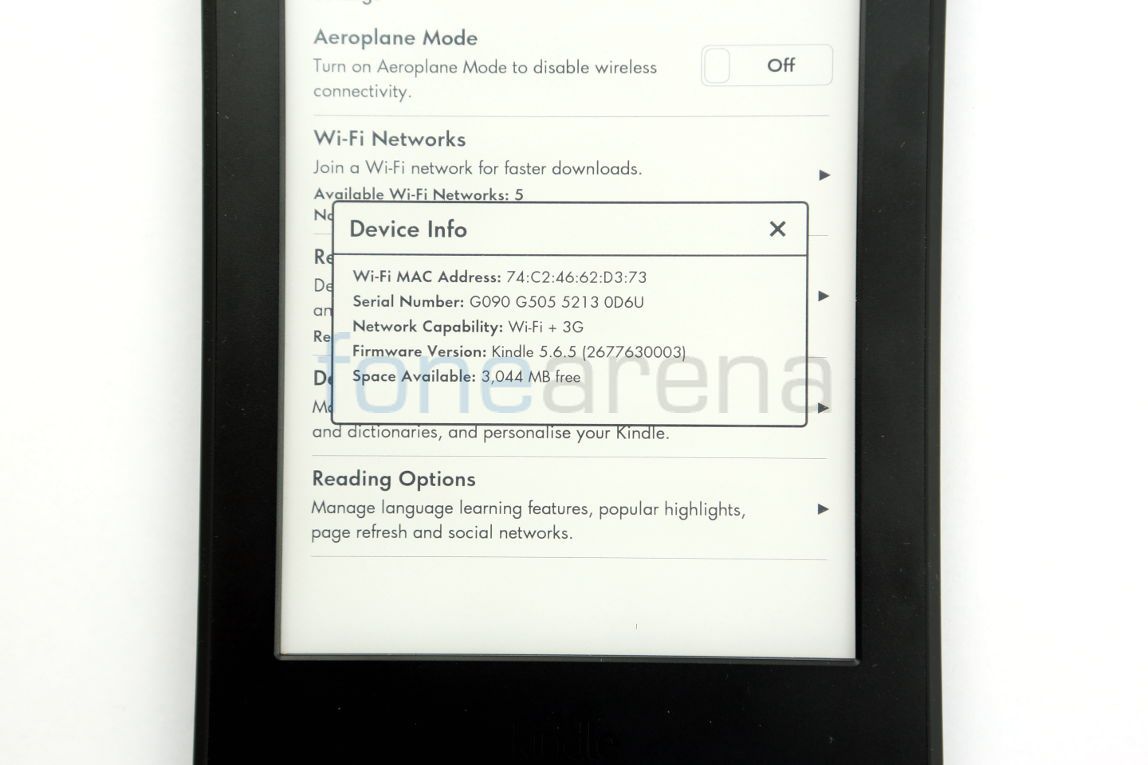 Coming to storage, Amazon has finally increased the storage from 2GB to 4GB in the new Paperwhite. You get 3.3GB of usable storage to store thousands of books and graphic novels, compared to 1.25 GB of user memory in the 2012 and 2013 Kindle Paperwhite models. 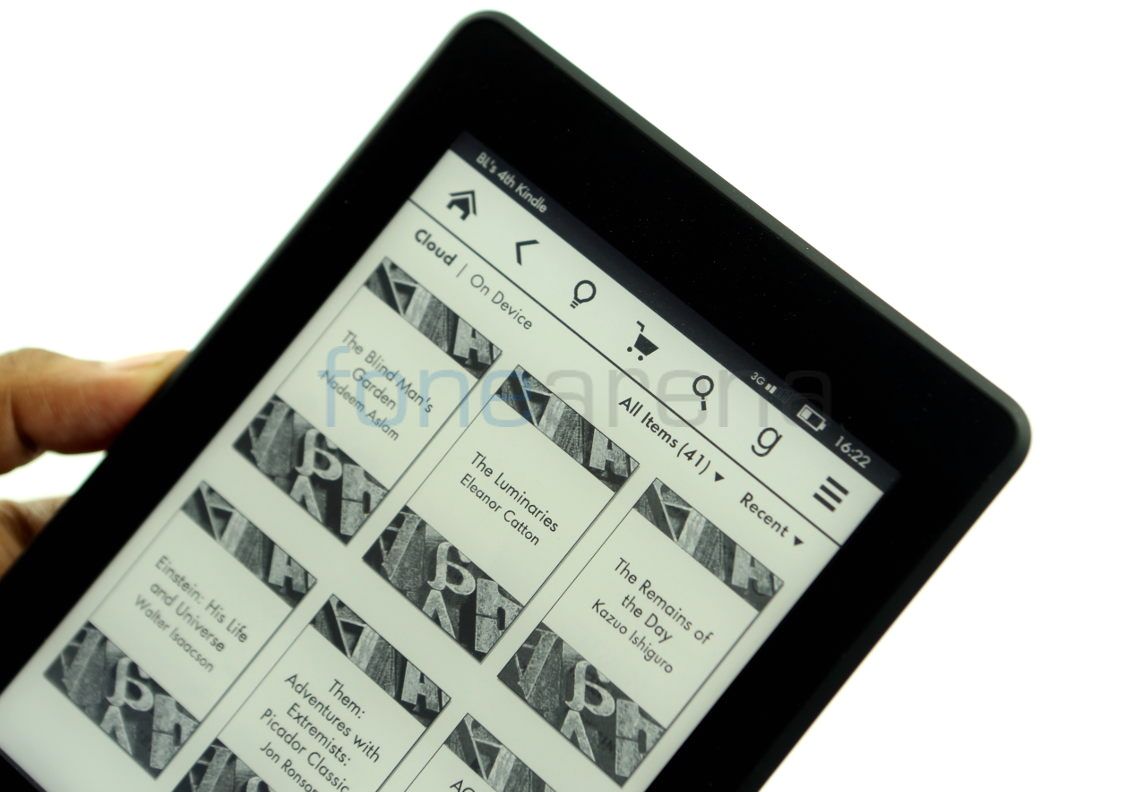 The connectivity features are exactly similar to the first two models, including 3G (in the 3G version, powered by Vodafone in India) for downloading books for free anywhere and WiFi 802.11 b/g/n support. As usual you get excellent battery life. Amazon promises up to 6 weeks (wireless off) of battery life with half an hour reading with brightness at 10. The first two Paperwhite models had up to 8 weeks of battery life, but this is still good compared to tablets.

At Rs. 10,999 for the WiFi version and Rs. 13,999 for the 3G version, the Kindle Paperwhite (2015) is the second best eReader you can get in the market, after the Kindle Voyage. Last year’s Paperwhite did not bring a huge improvement compared to the first-generation Paperwhite. The new Paperwhite at the same price brings Kindle Voyage’s 300 ppi screen and more memory, which are good improvements. This doesn’t have a scratch-resistant glass like the Voyage, so you have to use a scratch-guard or a flip cover to protect the display from scratches.

If you have enough budget for the Kindle Voyage that starts at Rs. 16,499, you don’t have to hesitate to choose it, since it has a flush-front display with scratch-resistant glass, sleek design, light sensor for automatic brightness adjustment and PagePress page turn buttons. To summarize, here are the pros and cons of the new Kindle Paperwhite.