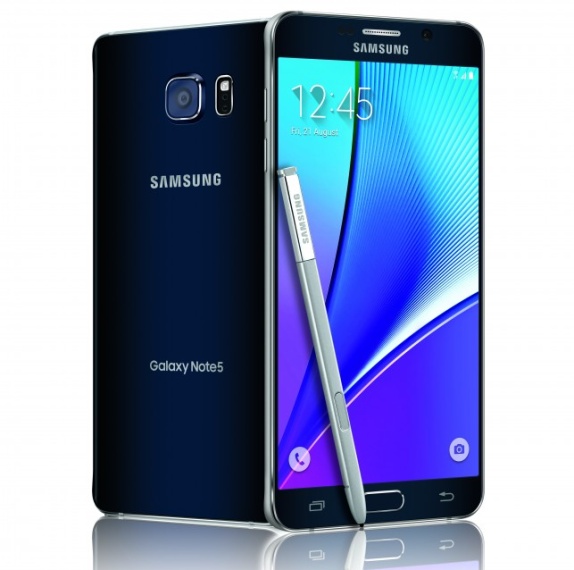 Samsung has officially announced its latest flagship phablet, the Galaxy Note5. The newest version of the device carries the Galaxy S6 design language.

As expected, the Samsung Galaxy Note5 builds up on the Note 4 hardware and the phablet itself is not a millimetre thinner than the previous model, making the device much easier to handle. The Note5 measures 153.2 x 76.1 x 7.6mm and weighs about 171 grams.

Samsung is using the Super AMOLED screen with a QHD resolution on its Note 5. Under the hood, there’s a Exynos 7420 chipset powering the phablet along with 4GB of RAM. The South Korean manufacturers very own mobile chipset is currently one of the fastest in the market and it was quite obvious that the Galaxy Note5 is featuring it.

The Galaxy Note 5 brings the latest storage standard – UFS 2.0. The base model will house 32GB of internal storage, but you can upgrade to 64GB to match your needs. Unfortunately, the new design language means no microSD slot and surprisingly Samsung is not releasing the 128GB variant this time.

Moving on to the camera department, the sensor has been directly lifted from the Galaxy S6. The Note5 has a 16 megapixel f/1.9 aperture sensor, optical image stabilization and brings auto real-time HDR option. The unit is capable of recording 2160p videos and according to the company, the camera can also livestream 1080p videos to YouTube. On the front, a 5 megapixel sensor is in charge of capturing selfies.

The performance of the fingerprint sensor has been enhanced and it can be now used to authenticate financial transactions. The Note5 comes with a wide range of connectivity options and has the Samsung Pay on board, which works over NFC or MST. In case you are wondering, the Samsung Pay will launch in the United States this September.

The Note5 comes with a non-removable 3,000mAh battery and features fast charging, which works for both wired and wireless. The phablet runs on Android 5.1.1 Lollipop and as usual, there’s a layer of Touchwiz UI.

Samsung Galaxy Note5 will be up for grabs in Black Sapphire and White Pearl color options. The device can be pre-ordered today, but will go on sale in the United States on August 21. Pricing will vary from region to region.