More information about the features of Samsung Galaxy Note 5 have surfaced. The next flagship from Samsung that is expected to be launched on August 13 is said to sport Exynos 7422 SoC, 4GB of RAM. 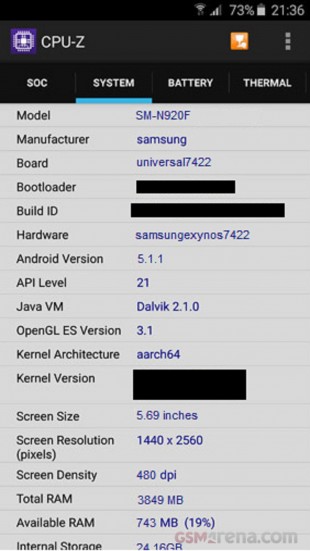 The screenshot from a Galaxy Note 5 running CPU-Z application shows that the Note 5 will feature Exynos 7422 SoC and have a 4GB RAM. The device in the screenshot has model number SM-N920F. The image also confirms a 5.7-inch QHD display, 32 GB of storage and Android 5.1.1. Just yesterday, photos of the S-Pen were leaked. The Galaxy Note 5 is rumored to come with a 5.7-inch Super AMOLED Quad HD display, Exynos 7422 chipset along with 4GB LPDDR4 RAM. The phone is expected to come with a 16-megapixel rear camera, similar to the Galaxy S6.