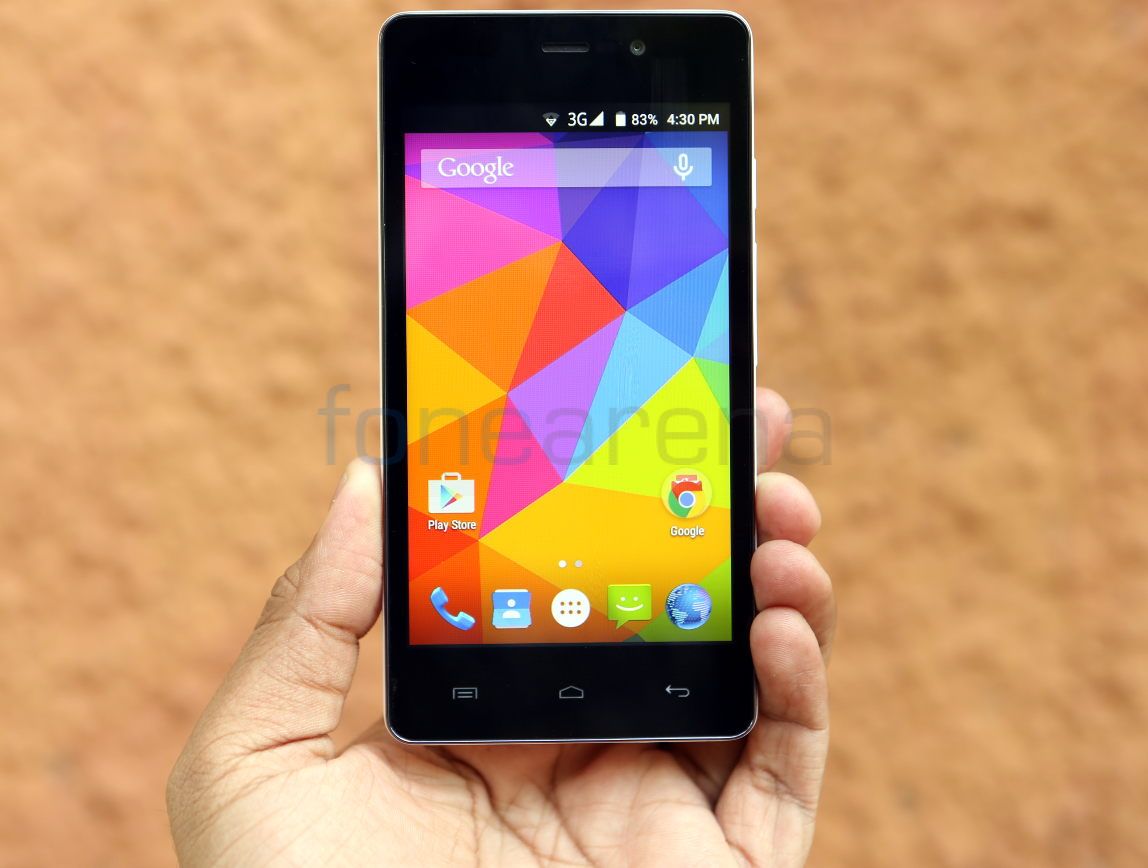 Micromax launched the Unite 3 Q372 recently, as the successor of last year’s Unite 2 A106. The Unite 2 had Indic keyboard with text input in 20 Indian languages, the new Unite 3 smartphone has Firstouch keyboard that lets users translate and transliterate in 10 regional languages. Micromax has also upgraded the camera in the new Unite smartphone. Is the smartphone worth the price? Let us find out in the review. 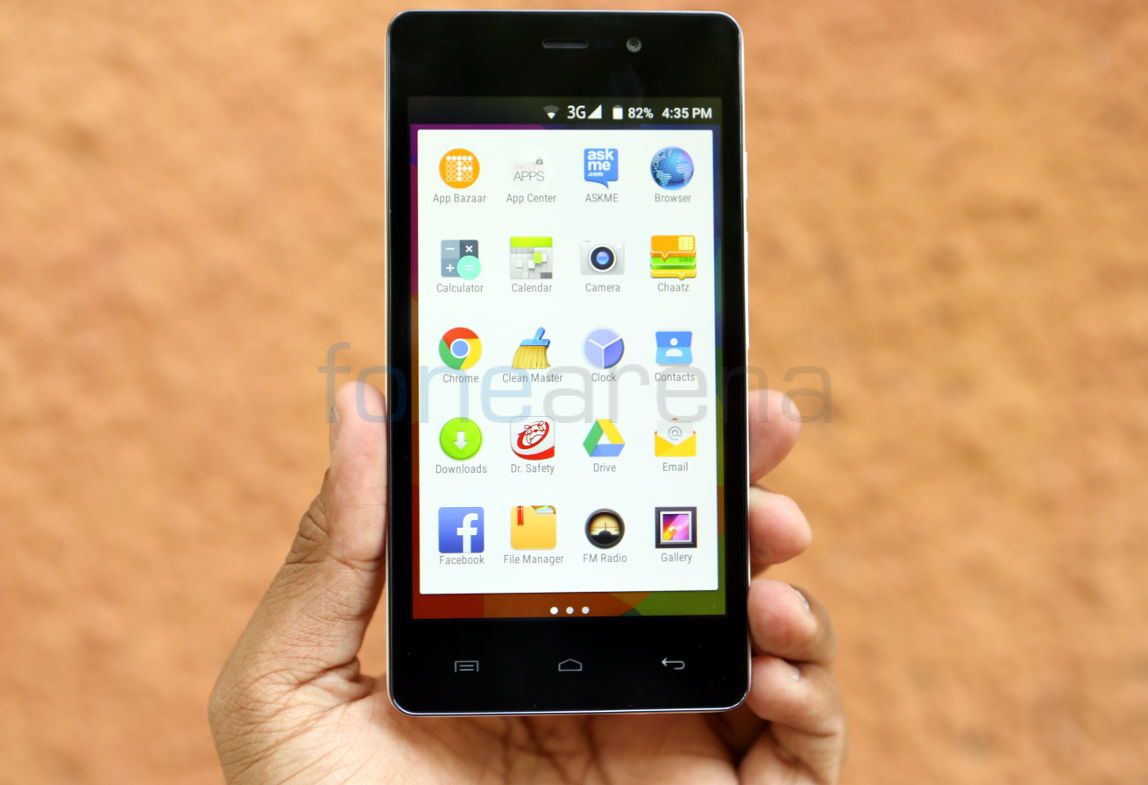 The Unite 3 has the same 4.7-inch IPS screen with a resolution of 480 by 800 has a pixel density of just 198 ppi from the Unite 2. The display is bright and the sunlight legibility is good too, but the viewing angles not the best. It has huge bezels around the display, similar to the Unite 2. It has Corning Gorilla Glass 3 protection that prevents the smartphone from scratches. Since the display is glossy, it is prone to fingerprints. 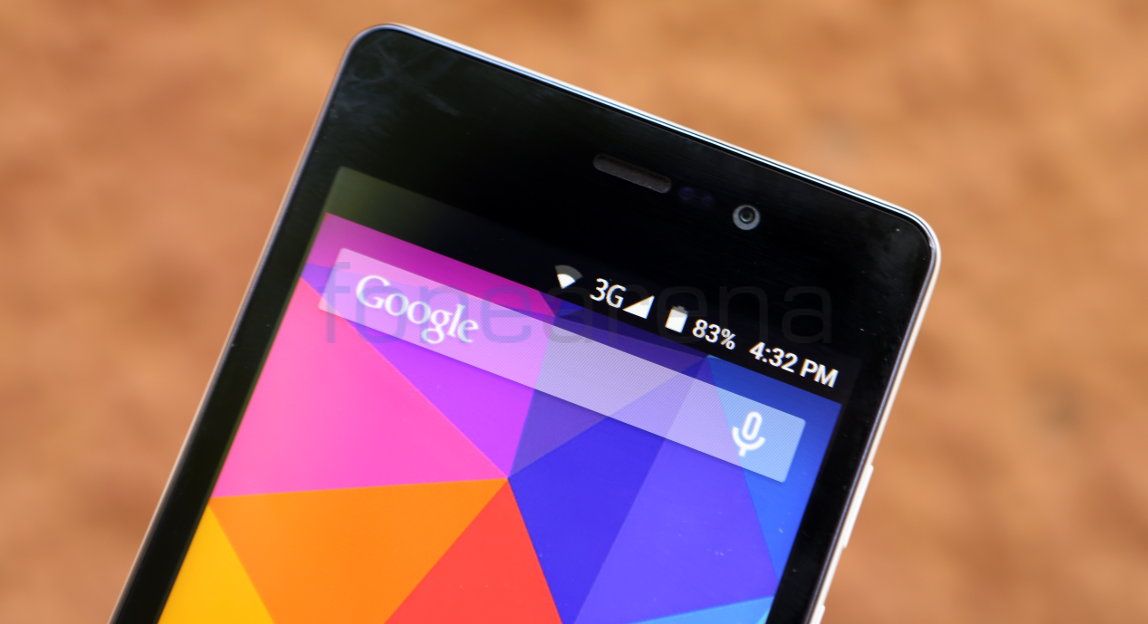 It has a 2-megapixel camera on the front along with the usual set of proximity and ambient light sensors next to it. The camera is decent for selfies and video chats. It can record videos at VGA resolution. It also has a small notification LED that is hardly visible when it’s off. 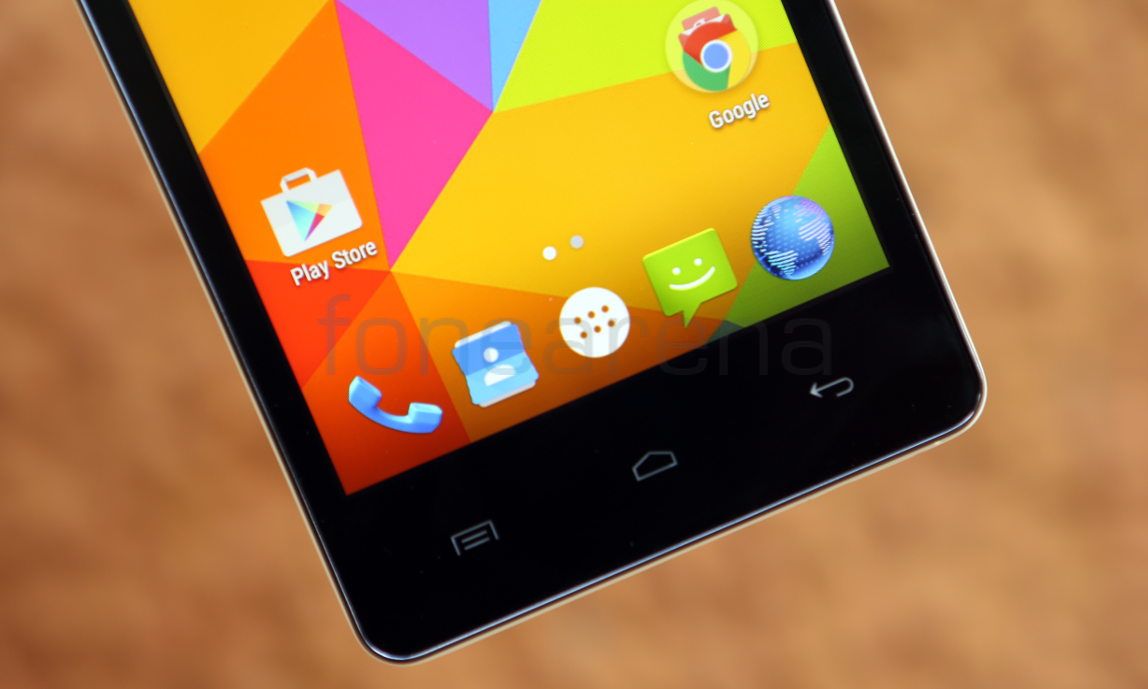 There are the usual set of capacitive touch buttons below the display. These are backlit and offer haptic feedback when pressed. 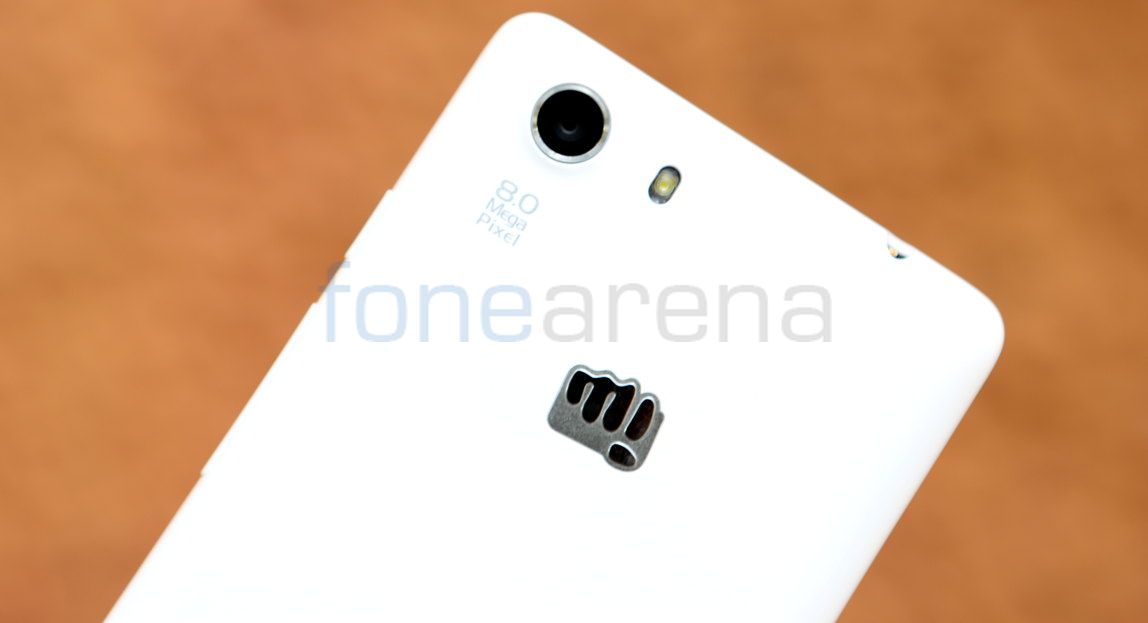 On the back there is an 8-megapixel auto-focus camera with single LED flash. The camera has a chrome ring around it. 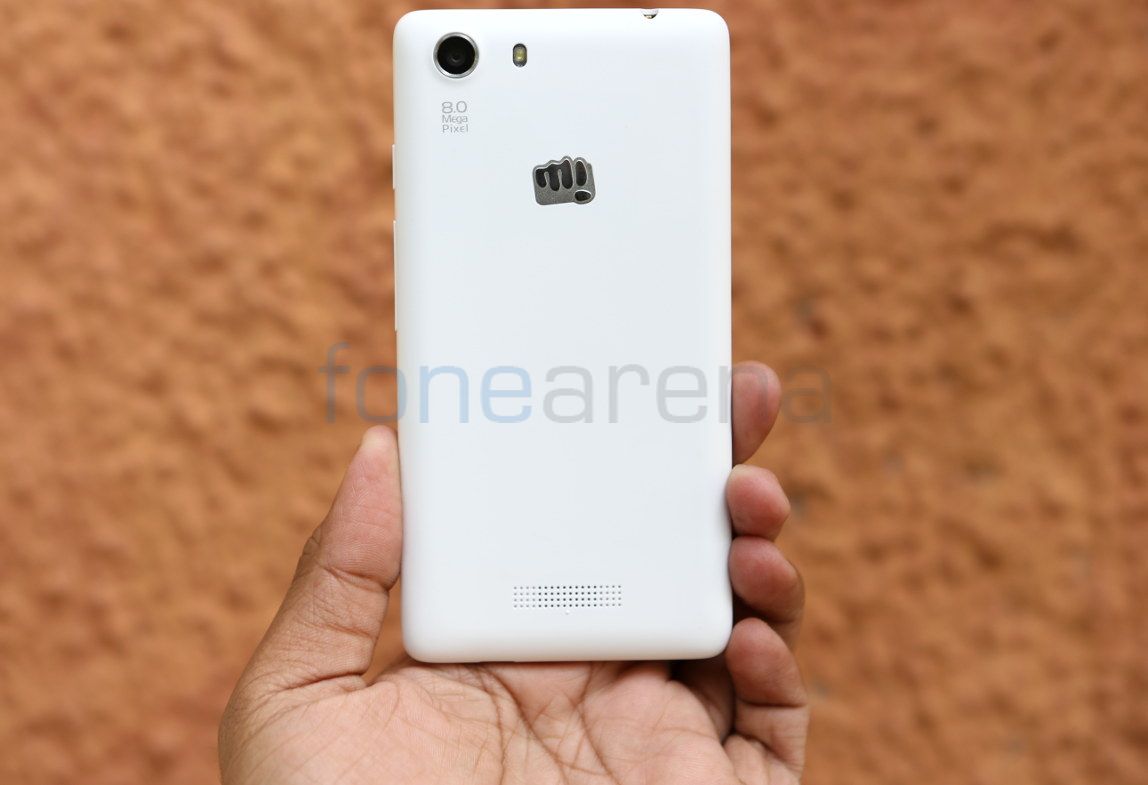 The plastic back cover has a matte finish, which makes the phone slippery for one-handed usage, since the cover extends to the sides of the smartphone. The build quality is good for the price. The white colored back attracts dust easily. It weighs 150 grams. The power button and the volume rockers are present on the right side of the smartphone. These buttons are attached to the back cover. The 3.5mm audio jack is present on the top, while the micro USB slot and the microphone are present on the bottom. 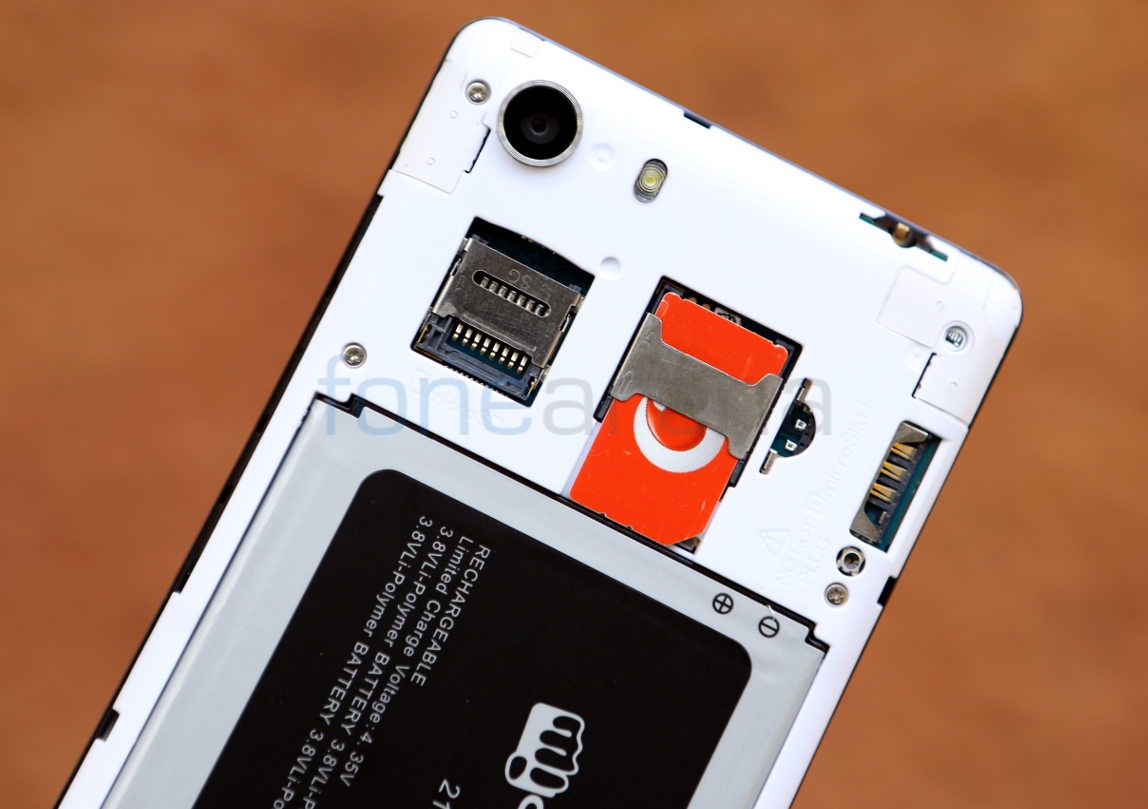 It has a mini or normal SIM slot above the battery and a secondary micro SIM slot is present next to it. There is also a microSD expansion slot that accepts cards up to 32GB. 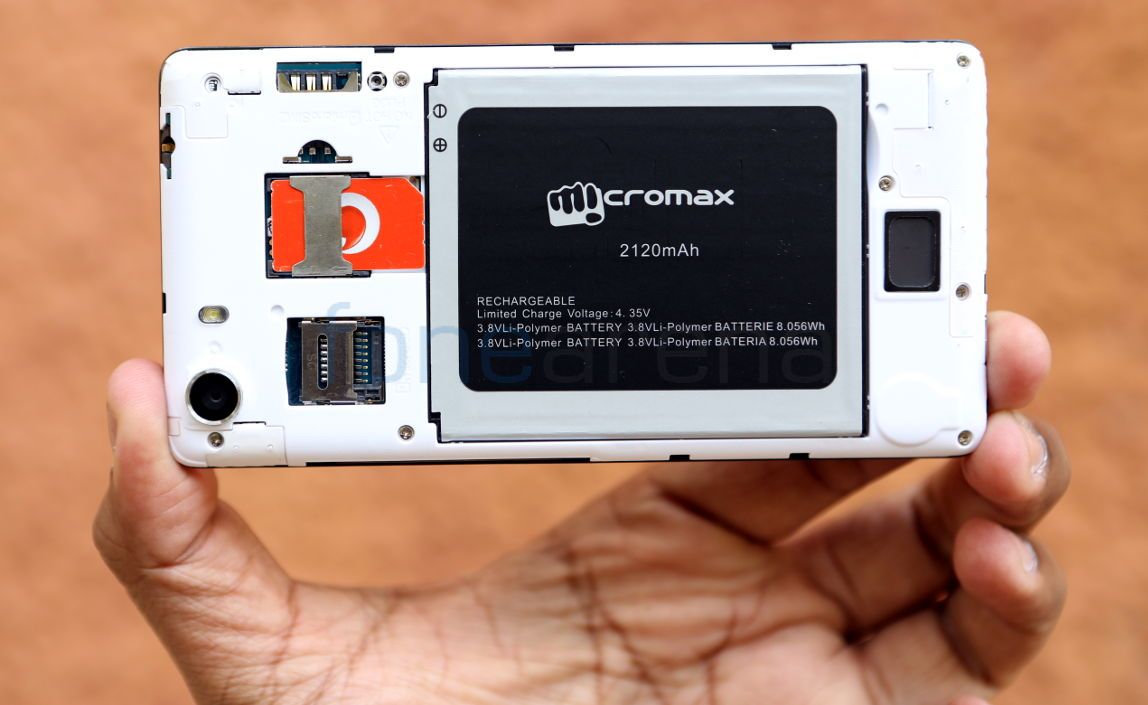 There is a 2120mAh removable battery, even though the specifications on the website says that it has a 2000mAh battery. 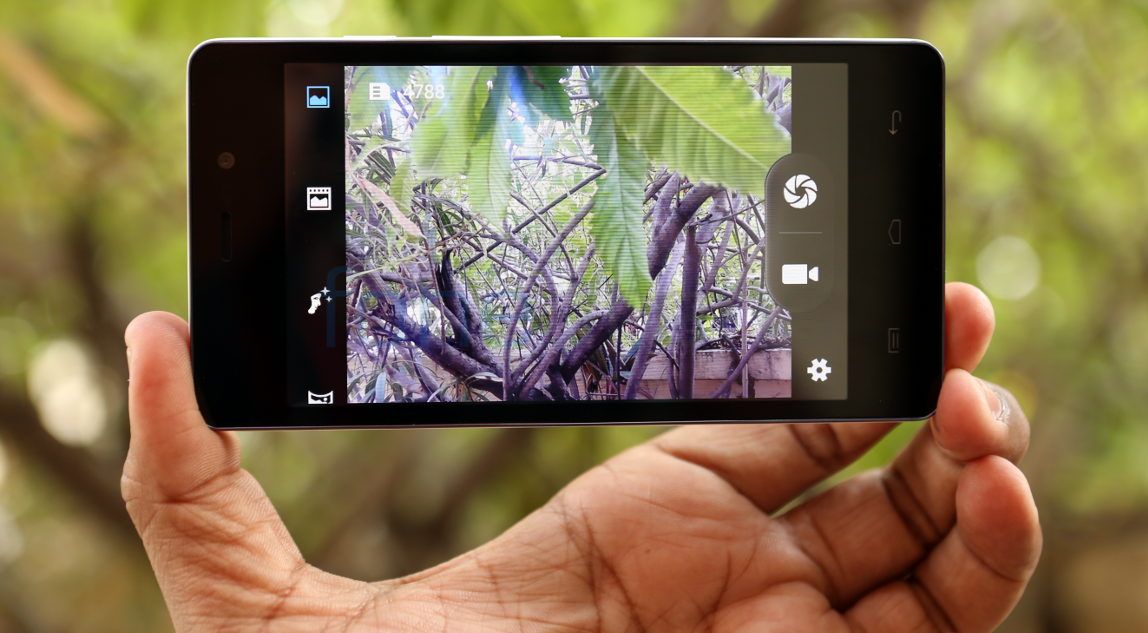 It has the same MediaTek camera UI seen on Unite 2. Daylight shots are decent, but the images are dull. Macro shots came out well and the HDR shots are decent too. Touch to focus doesn’t work properly at times, so it’s not easy to focus an object. Low-light images has a lot of noise, but the LED flash is helpful in capturing images in such conditions and doesn’t overpower objects even if they are close. 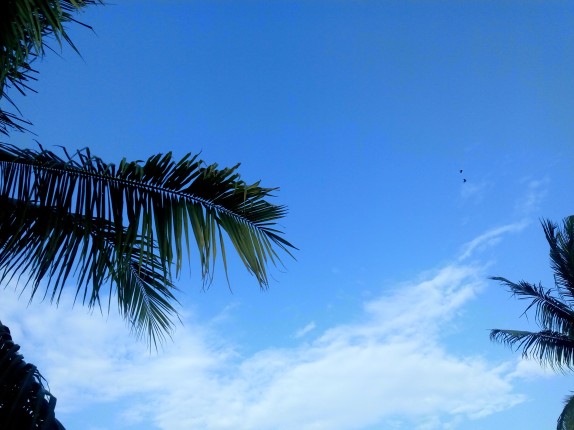 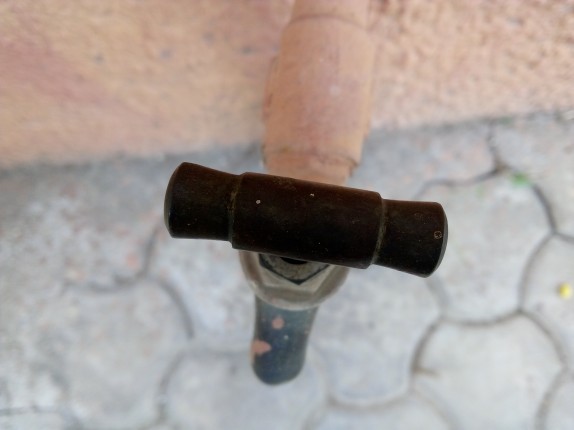 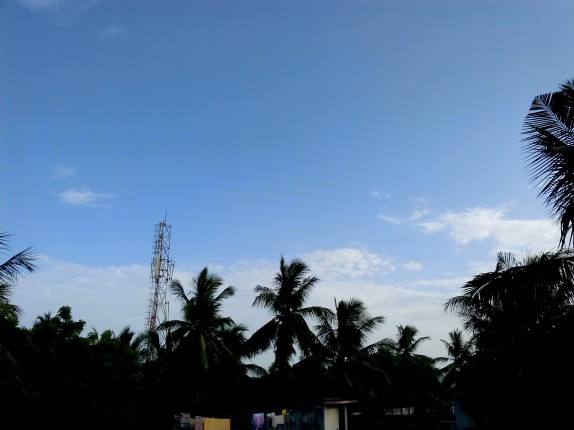 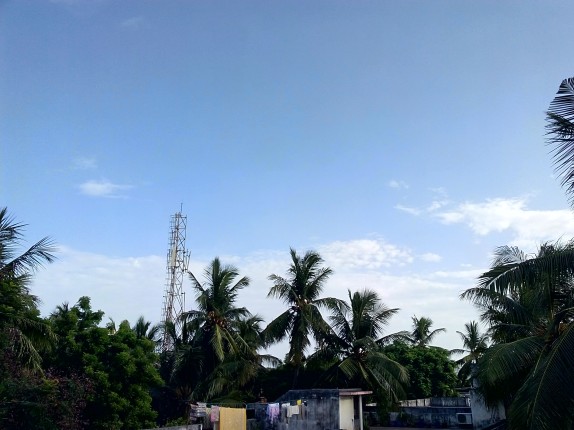 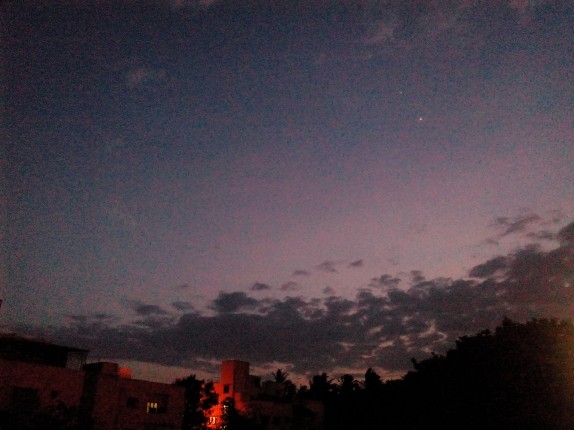 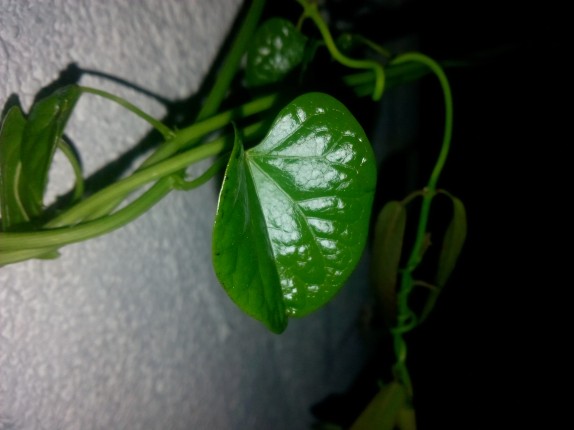 You can check out the complete set of Micromax Untie 3 camera samples here. The smartphone can record videos at 1080p full HD resolution. Video quality is good. Since it lacks a secondary microphone audio is not crisp. Check out the full HD video sample 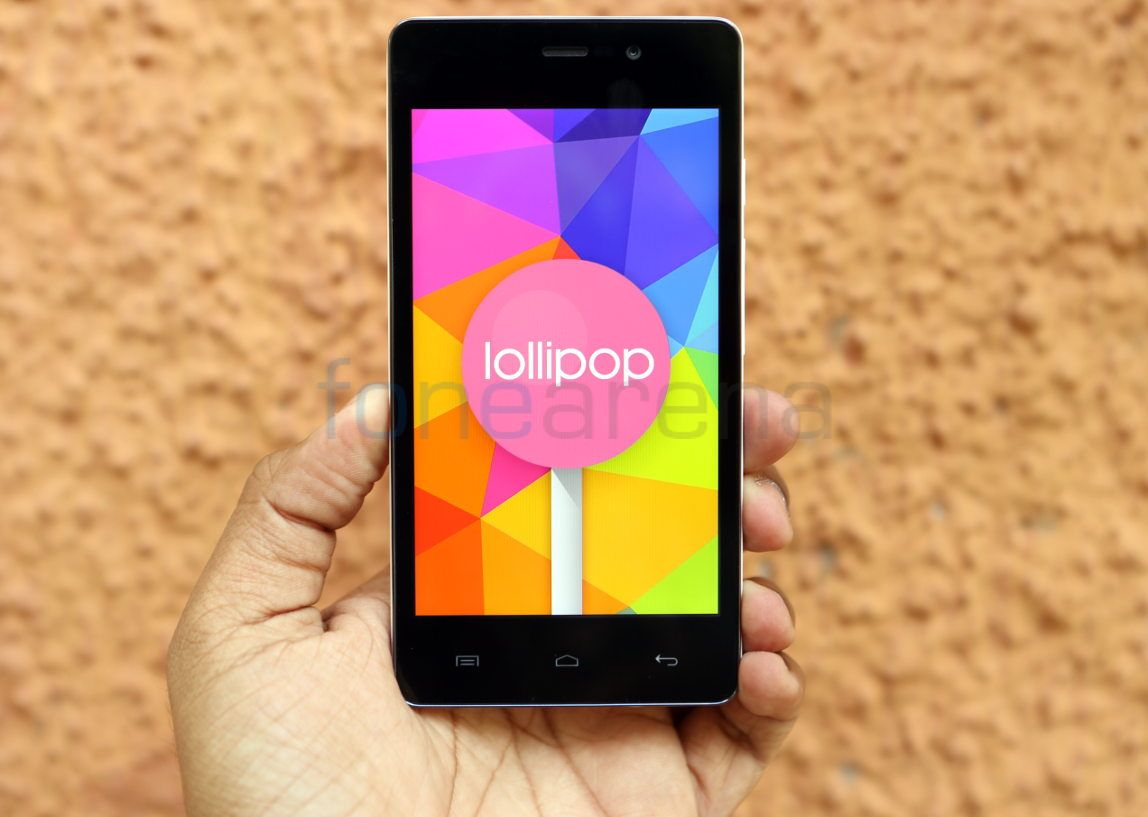 Coming to the software, the Unite 3 runs on Android 5.0 (Lollipop), which is almost stock with few visual changes. The company doesn’t say when the smartphone will get the Android 5.1 update. 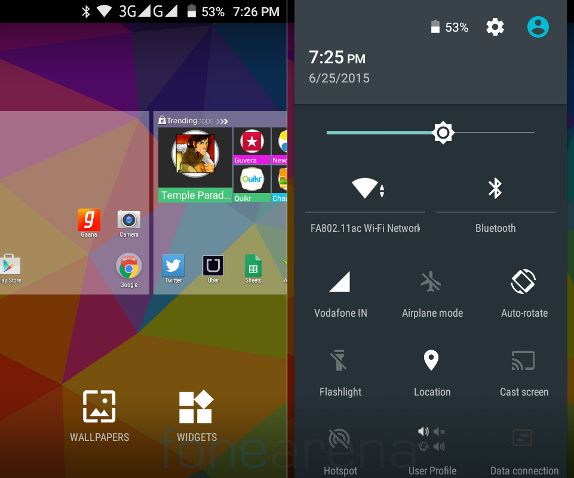 The homescreen looks almost similar to the Google Now screen, but it doesn’t launch Google Now on swiping from left to right. You can launch the dialer or camera directly from the lock screen. It doesn’t have video pinning, Smart Gestures or any other features seen on the Canvas smartphones. 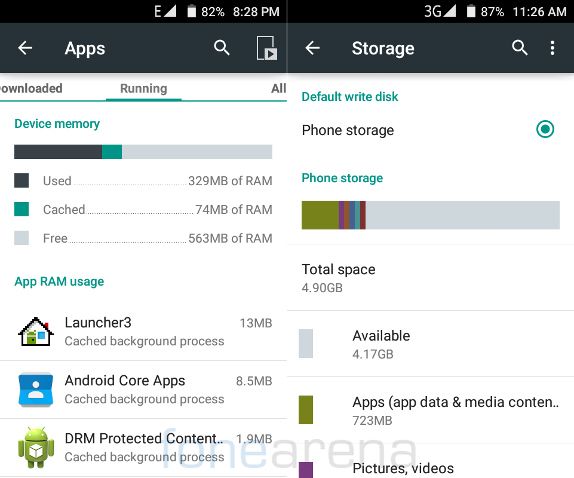 Out of 1GB of RAM, you get 966 MB of usable RAM. About 560MB of RAM is free when the phone is idle, with just the default apps running in the background. Out of 8GB of internal storage you get just 4.17 of usable storage that can be used for installing apps and for mass storage. You don’t have an option to move apps to the SD card. It has an option to set microSD as the default write disk, but apps still doesn’t get installed directly to the SD card. 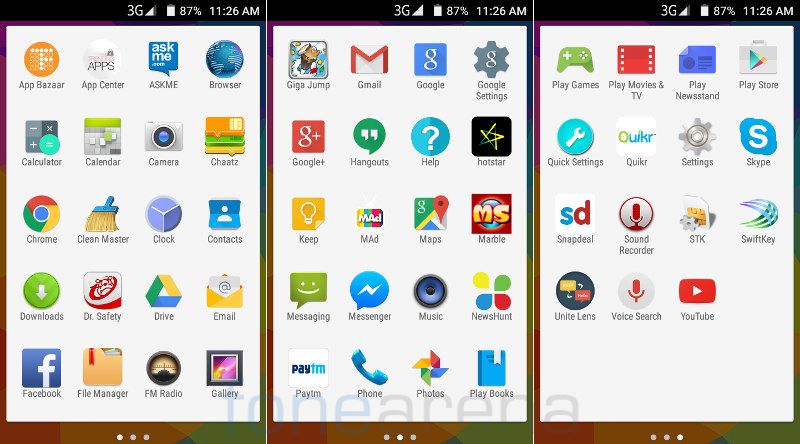 The phone comes with a lot of pre-loaded apps that cannot be removed. These apps alone occupy 723MB of internal storage. Other than the usual set of utility apps and Google apps, it comes with App Bazar, App Center, ASKME, Chaatz, Clean Master, Dr. Safety, hotstar, NewsHunt, Paytm, Quikr, Skype, Snapdeal, SwiftKey and Unite Lens. It also has trial games like Giga Jump and Marble. 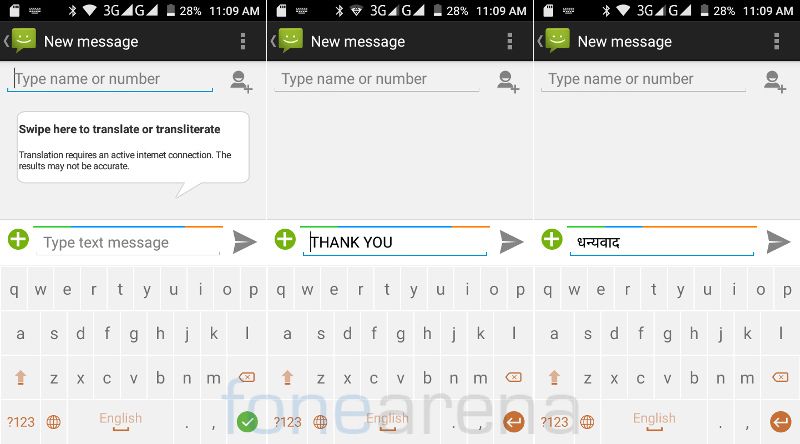 The Firstouch keyboard lets users translate and transliterate in 10 regional languages with just a swipe. Once you select a language from the settings, you can swipe from the left to write to translate and from right to left to transliterate. This requires internet connection and take few seconds to get you the result. This feature is available for all the regional languages – Hindi, Gujarati, Punjabi, Malayalam, Tamil, Telugu, Kannada, Oriya, Bengali and Marathi. It is not perfect and can be improved a lot. The keyboard is not easy to type compared to the stock Android keyboard. You can check out a quick demo of the keyboard in the unboxing video. 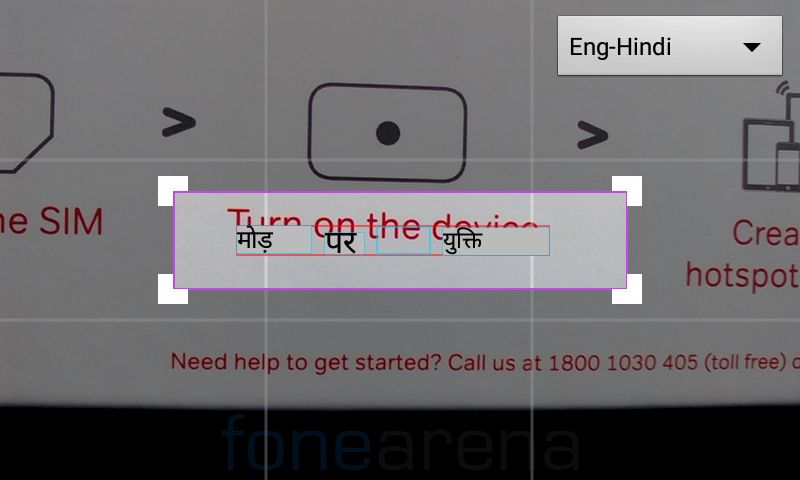 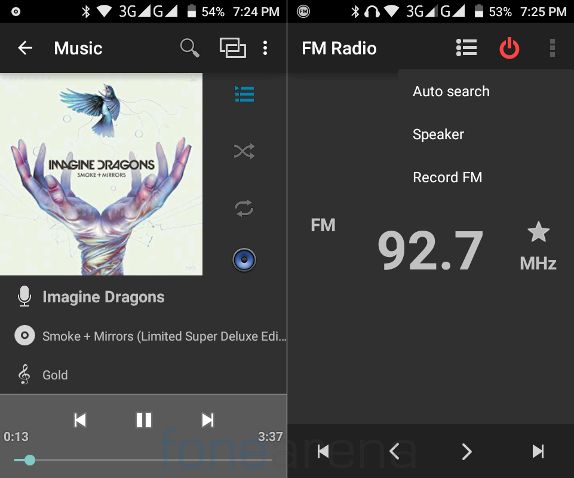 The music player has a standard user interface and can play a range of audio formats. You can enable the equalizer for Bass boost and 3D effect features when you are listening using earphones. Audio from the bundled earphones is decent and the loudspeaker output is good. FM Radio has a standard UI and comes with auto search and recording. The default video player can play full HD 1080p videos, but it is not smooth. 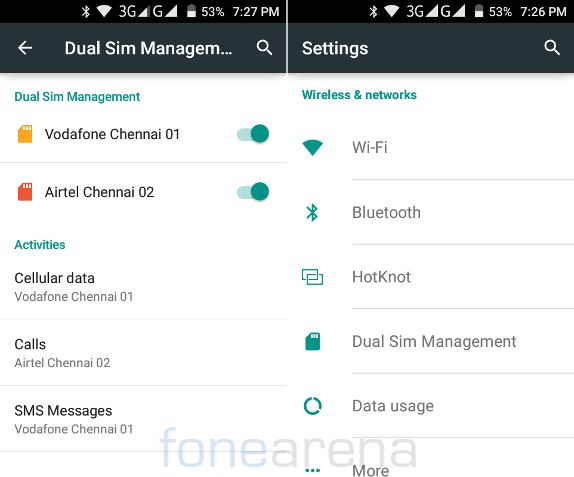 It has SIM manager option that lets you set default SIM for data, calls and SMS. Both the SIMs support 3G, but you can use 3G on only one SIM at a time. Connectivity features include, 3G HSPA+, Wi-Fi 802.11 b/g/n, Bluetooth 4.0 with A2DP and GPS. It doesn’t have magnetic compass. It comes with MediaTek’s HotKnot feature that allows two phones to exchange photos and videos in an instant as long as the two screens are put together. It has support for wireless display and also has USB on-the-go (OTG), similar to the Unite 2. We had issues with the call clarity occasionally, but we did not face any call drops. 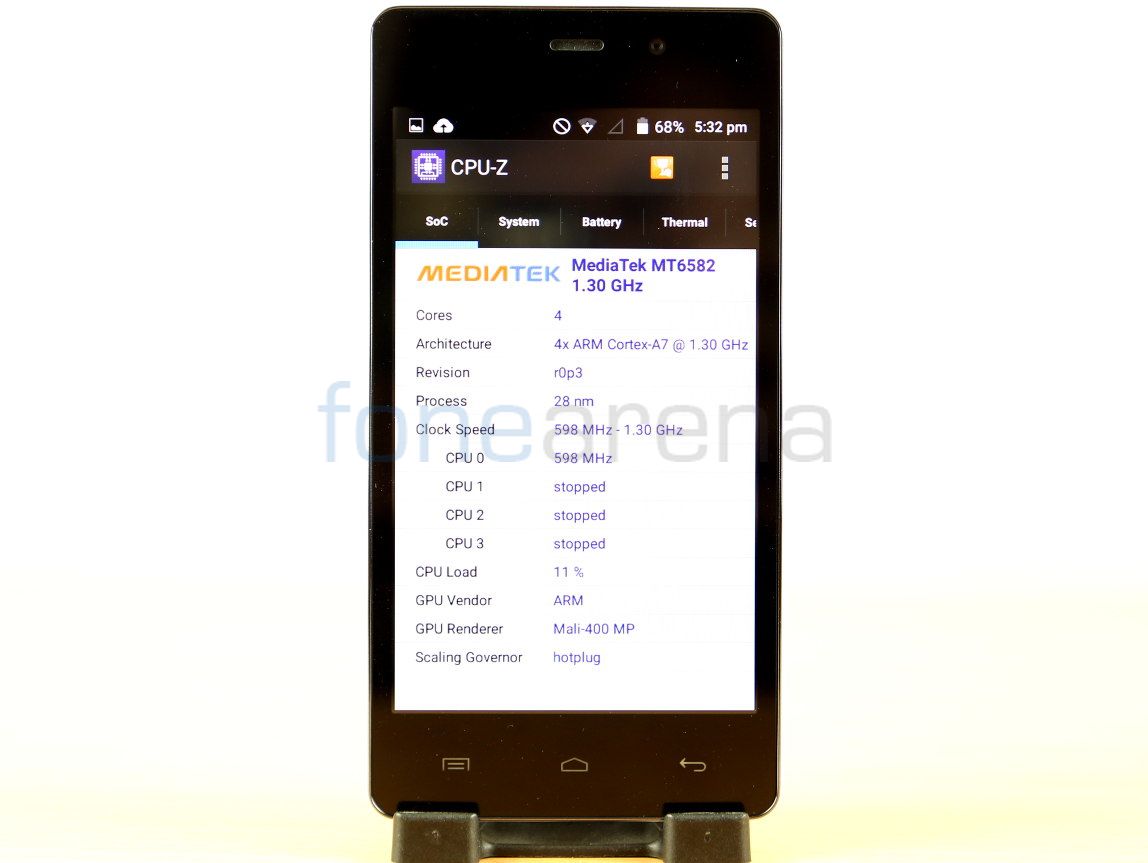 Coming to the performance, the smartphone is powered by a 1.3 GHz quad-core MediaTek MT6582 processor with Mali 400 GPU. Performance is pretty good without any lags. RAM management is also good that lets you run several apps in the background without any lags. It gets a bit warm when you are using 3G in hot environment similar to most other smartphones, but it doesn’t get too hot. Check out some synthetic benchmark scores below. 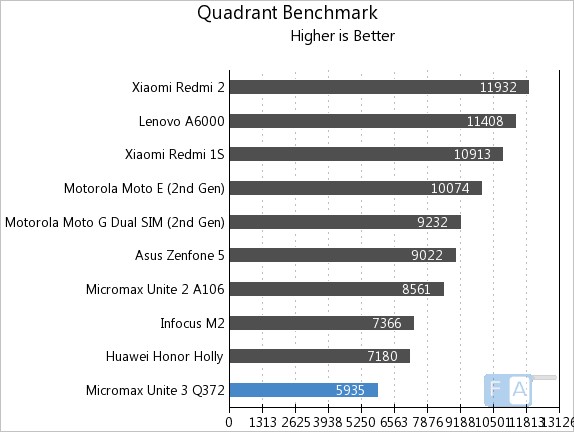 It managed to score just 5935 pints in the Quadrant Benchmark. 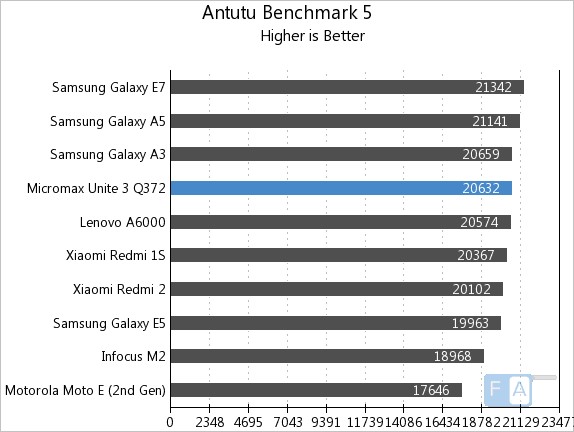 It scored 20632 points in the AnTuTu Benchmark 5 and grabs the fourth spot. 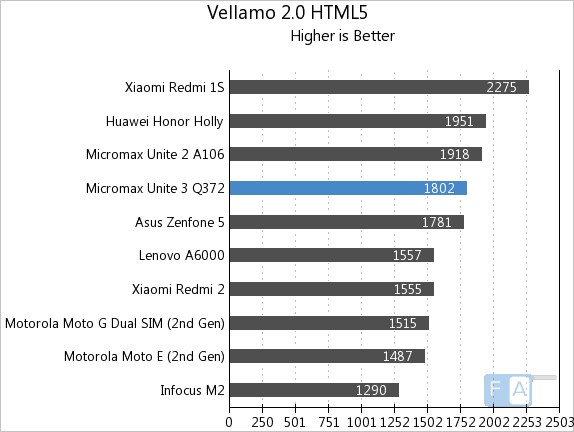 It scored 1802 points in the Vellamo 2 HTML5 browser benchmark and lies behind the Unite 2. 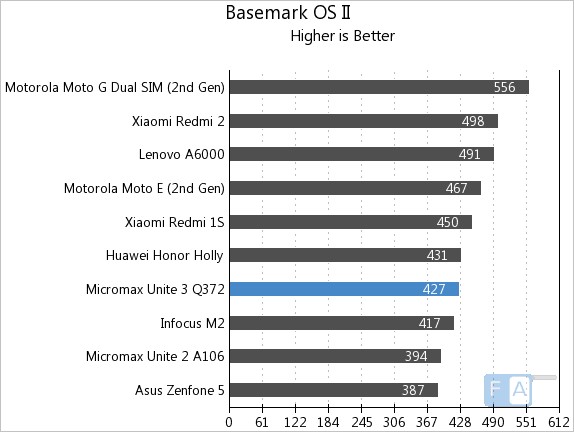 It managed to score 427 points in the Basemark OS II benchmark. Check out the complete set of Micromax Unite 3 benchmarks here.

We tested some games on the smartphone, which were decent. Some high-end games worked only with low graphics, but small games were good. Gaming performance is decent with occasional lags in the gameplay in some high-end games. The smartphone also supports USB controller. It scored 3.5 out of 5 starts in our gaming review. Check out the video. 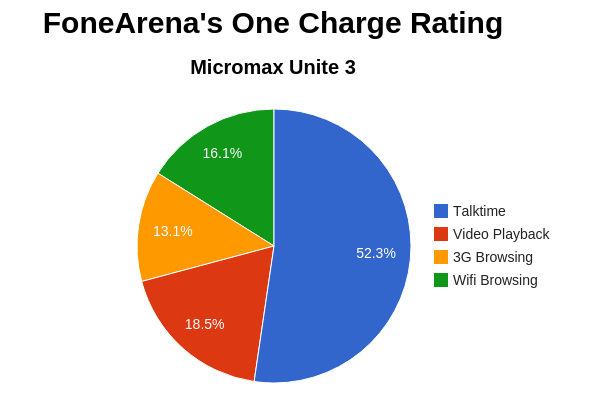 The 2120mAh battery offers good battery life that lasts for a whole day with average use when both the SIM cards are on use. With heavy usage, it lasts for less than a day. There is a standby intelligent power saving mode in the battery settings, but the battery drain is same in standby even with the option enabled. It achieved One Charge Rating of 9 hours and 55 minutes, mainly due to brilliant talk time.

Overall, the Micromax Unite 3 is a decent smartphone for the price, but it is not a considerable upgrade compared to the Unite 2. Micromax has improved several aspects in the latest Unite series smartphone, still there are lots to be improved. The smartphone currently retails for around Rs. 6000 and is also available for purchase offline, unlike the company’s Canvas Spark. Last year when the Unite 2 was released there were very few competitors, now there are several smartphones in similar price range that offer better specifications. If you can compromise on these things, go for it, otherwise there are several handsets, including 4G smartphones at a slightly higher price tag.