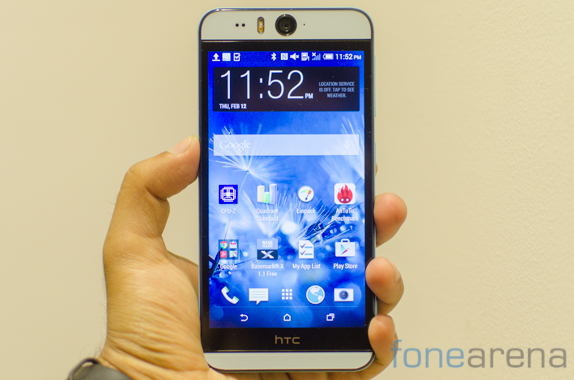 HTC’s Desire series of phones have traditionally been mainstream, mid-range handsets with specs to match. Over the last few months though, the Desire series has consistently tried to punch above it’s weight. The Desire Eye is the biggest example of such a strategy change. With an innovative design, high end specifications and features that keep up with ongoing trends, it has a lot going for it. Read on our full review to get a deeper look at the handset and to gauge whether it has what it takes to earn our recommendation.

From a distance, the pastel dual tone finish with matte plastics looks like something made by Fisher-Price. On closer inspection though you’ll notice the attention to detail. The quality of plastics is exceedingly good and the Desire Eye could very well be the best built device in the Desire series of phones so far. 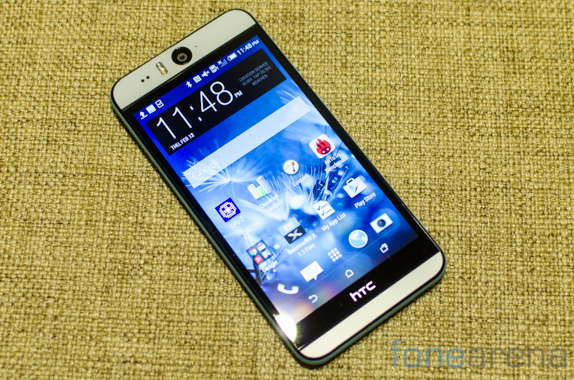 The front of the phone employs a large 5.2 inch display with a Gorilla Glass 3 coating on top. Above and below it are the quintessential HTC BoomSound speakers. Compared to the likes of the HTC One or even the Desire 816 for that matter, the implementation is quite discrete. What sets the Desire Eye apart is that the front facing camera has a whopping 13MP sensor and is accompanied by a dual LED flash but more on that later. 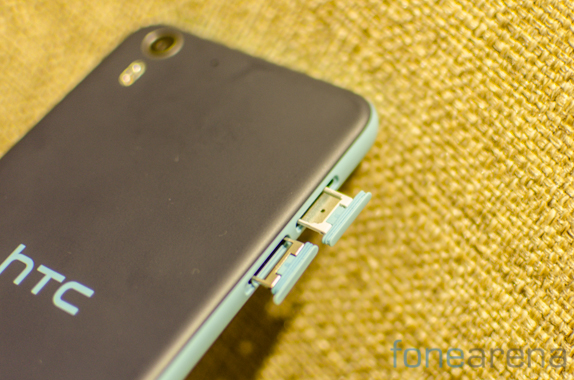 The right side of the handset includes the volume rocker with the power button conveniently placed below it within easy reach. The left side of the phone sports the nano SIM card and microSD card slots hidden under flaps. These flaps aren’t the easiest to remove but then again, you wouldn’t be changing the SIM or expansion card too often anyway so it shouldn’t really be a problem. The micro USB port is along the bottom edge of the phone while the 3.5mm headphone jack is along the upper edge. 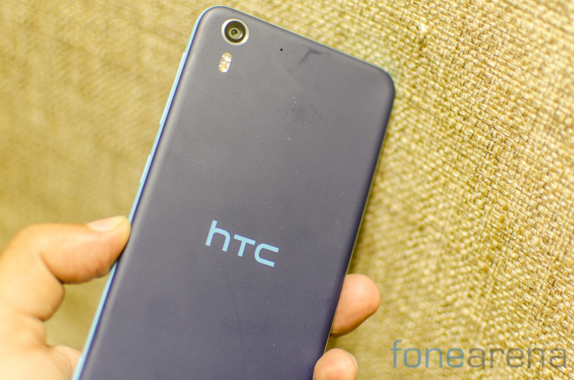 The back of the phone is discrete for the most part with the 13MP rear facing camera placed along the top left corner. The camera module has a chrome ring running around it. The slightly recessed module should be able to avoid scratches for the most part. The dual LED flash placed below the camera module is of the dual tone variety. We’ll have more information about this in the camera section but the gist is that you’ll get more natural shots even when using the LED flash because of the dual color nature. 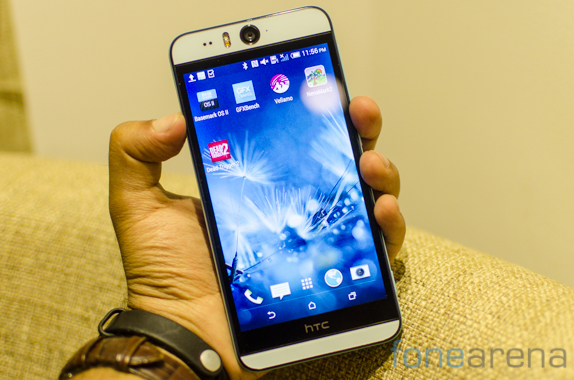 Overall the HTC Desire Eye is a good looking handset which employs a dual tone uni-body build to give it a very distinctive look.

While a definitive date hasn’t been revealed for the eventual Lollipop update, the Desire Eye ships with Android 4.4.4 KitKat on board. This is of course paired with the latest version of Sense UI ie Sense 6. There haven’t been many changes to the interface over the previous version with the lockscreen experience remaining more or less the same. A clock is present with weather information and four shotcuts on offer. You can unlock the lockscreen with  a double tap, an unlock swipe or by just using the power button as usual. 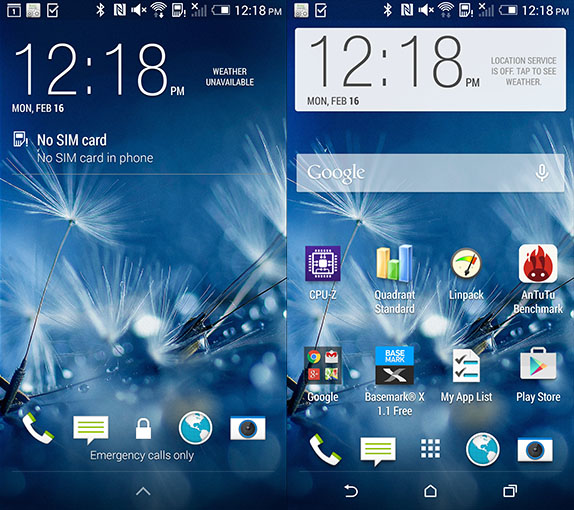 There’s not much of software differentiation here on the Desire Eye. Sense 6 is exactly what you’ve come to expect over the year or so. Nicely polished though perhaps a bit dull to experience, it involves the standard two step hierarchy of home screen and a secondary app screen. 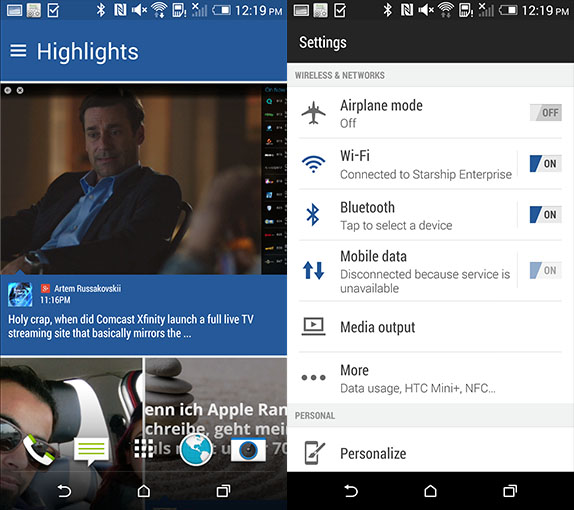 Swipe left and you’ll be greeted by BlinkFeed which is HTC’s answer to Flipboard. The application draws in information from feeds and social networks, presents them in a visually appealing way. All in all, there’s nothing particularly new to discover on the HTC Desire Eye other than the few camera centric tweaks that we’ll talk about further down. We expect to see a refreshed interface with Sense 7 which should be revealed alongside the next crop of flagships from HTC over at MWC.

Pushing the top end credentials of the HTC Desire Eye are the components found under the hood. The phone is powered by a Snapdragon 801 chipset clocked at 2.3Ghz. No longer top of the line but far from a slouch, the processor gives the handset enough grunt to plod through the heaviest of applications. Paired with 2GB of RAM and an Adreno 330 GPU, you won’t struggle with graphically intensive games or heavy multitasking. Over extended usage, we never found a reason to complain with the performance of the Desire Eye. Sense 6 remains slick and smooth. We put the handset through our regular suite of benchmarks to see how it fares against the competition. While not top of the line, the scores proved to be within close reach and real life differences were minimal if any at all. 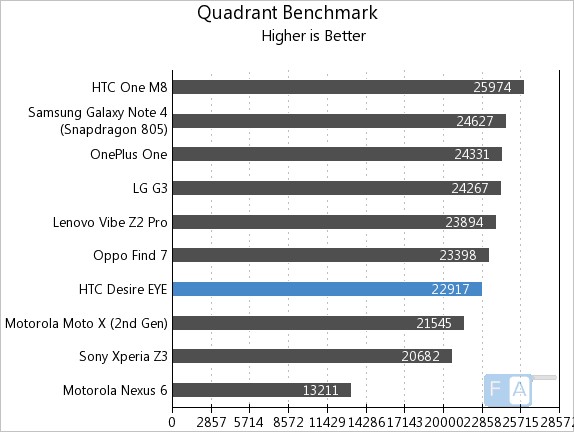 The Quadrant benchmark is an all encompassing benchmark that gauges CPU, Memory, GPU and I/O performance With a score of 22917 points, the Desire Eye lagged behind the likes of the Note 4 and the One M8 but the difference wasn’t huge. 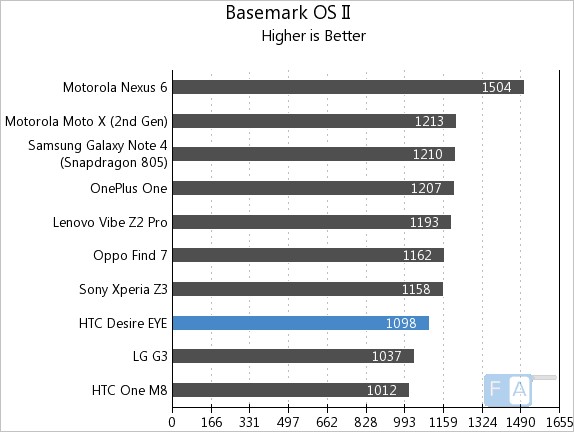 In the Basemark OS II benchmark, the score of 1098 puts it ahead of stablemate HTC One M8 albeit marginally so. Basemark OS II is an “all-in-one” benchmark that measures system, internal and external memory, graphics, web browsing, camera, battery and CPU consumption. 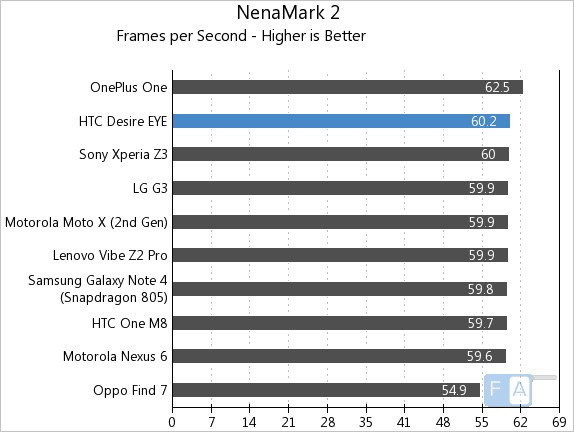 Coming to our final benchmark, NenaMark 2 which is a GPU centric benchmark shows that the performance is pretty much the same as any other flagship out there. All in all we discovered that the synthetic benchmark scores line up with our experience and performance is pretty much as good as it gets right now. All the competing devices included in the listing are flagship devices from their respective OEMs. The Desire Eye’s scores places it within easy reach of flagship status and we’re certainly convinced.

We’ve always sung praises about the displays installed on HTC’s handsets. The Desire Eye is no different. With a full HD IPS panel measuring at 5.2 inches, we doubt anyone will be underwhelmed. The screen displays excellent contrast levels and the blacks are as deep as they go on an LCD panel. Not the best when you crank up the brightness but at anything below that, the black levels will impress. 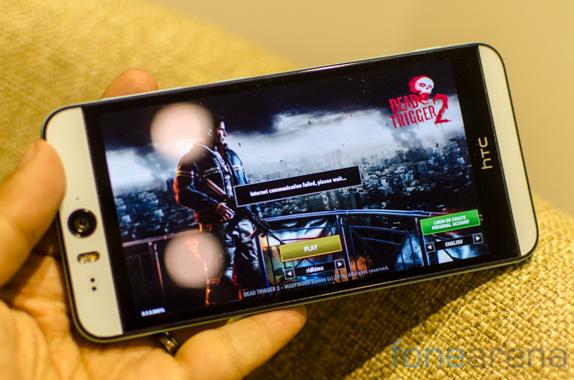 Sunlight readability was good thanks to the bright panel but the reflective finish means that you might have to angle the display just right. The pixel density of the HTC Desire Eye is 424 ppi. This might not be as impressive as it used to be before the advent of 2K panels on smartphones but real life difference really is minimal. You’ll be most certainly be satisfied, take our word for it!

The USP of the HTC Desire Eye is the dual 13MP cameras built into the svelte frame. While the rear facing 13MP module is standard fare alongside its dual tone LED flash, it is the front facing module that is rather unique. The front unit gains the same dual tone LED flash as on the rear unit and this gives it a whole new level of flexibility while shooting low light selfies or for that matter even while video calling. A fair bit of the magic is software oriented and hence difficult to show. The high resolution sensor and software magic allows the Desire to track and crop into individual faces while engaged in a video call. You can also simultaneously shoot photos from the front and back camera. The shutter button located on the side of the camera doesn’t really offer much feedback but i suppose we’ll take something over nothing. Long pressing the button activates burst mode and as expected, the software will automatically choose the best shot of the lot. Follow on below to see a range of camera samples and our opinion of the capabilities of the Desire Eye. 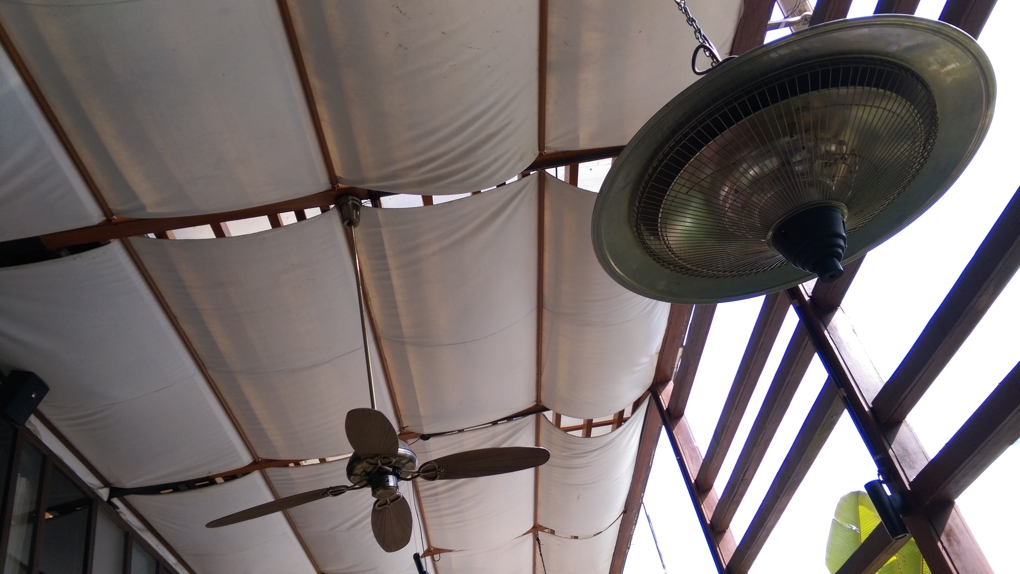 Like every high end handset out there, the Desire Eye has no problems dealing with well lit scenarios. The shots are bright and natural looking. Sure, the dynamic range tends to be somewhat lacking but flicking on the HDR mode assists to a large extent. 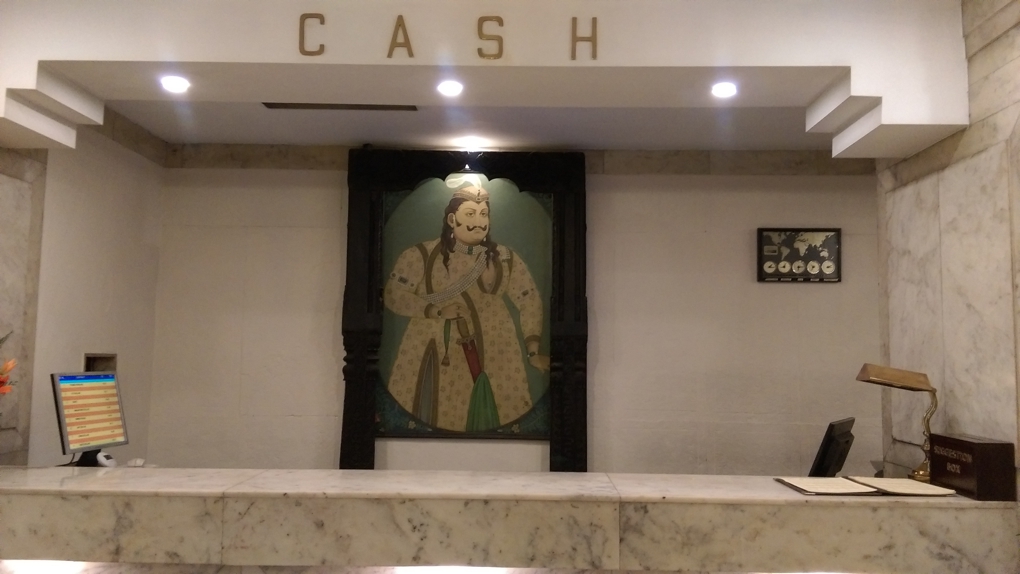 The problem really lies with anything less than a well lit scenario. The camera has a tendency to boost noise levels to a level well beyond acceptable. The lack of OIS means that you’ll struggle to get a sharp shot anyway. For a camera centric handset, the Desire Eye left us not particularly impressed with the shooting capabilities of its rear mounted camera but perhaps the front camera fares better? 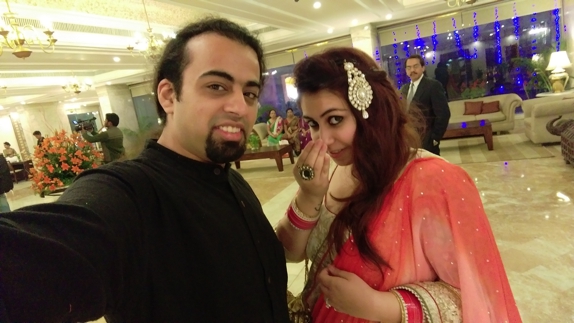 Short answer, no. While at first glance, the promise of a high resolution front sensor with a flash unit might sound appealing, the final shots were rather poor more often than not. Case in point the photograph above, a standard selfie stance with the countdown timer enabled to help minimize camera shake. The shot has a hint of blur, the highlights are completely blown in the chandelier in the backdrop. The string lights too are burnt and display an odd glow to them. More importantly though, the subjects in the frame display odd blotches and speckles despite there being none in reality. HTC really dropped the ball here by focussing on resolution and compromising on quality. A lower resolution but better front facing camera would have certainly been appreciable than the sorry state of affairs here.

Connectivity options on the HTC Desire Eye are as standard as they come. You’ll get a microSD card slot to augment the built in 16GB of storage of which under 12GB is available at first boot. This is a single SIM device unlike the majority of Desire series handsets and supports 4G LTE/ 3G HSPA+ networks. The WiFi chip supports 802.11 a/b/g/n (2.4 and 5 GHz) but not the ac standard which is a bit of a bummer. Bluetooth 4.0 with aptX codec, NFC and GPS with GLONASS round up the remaining connectivity options. 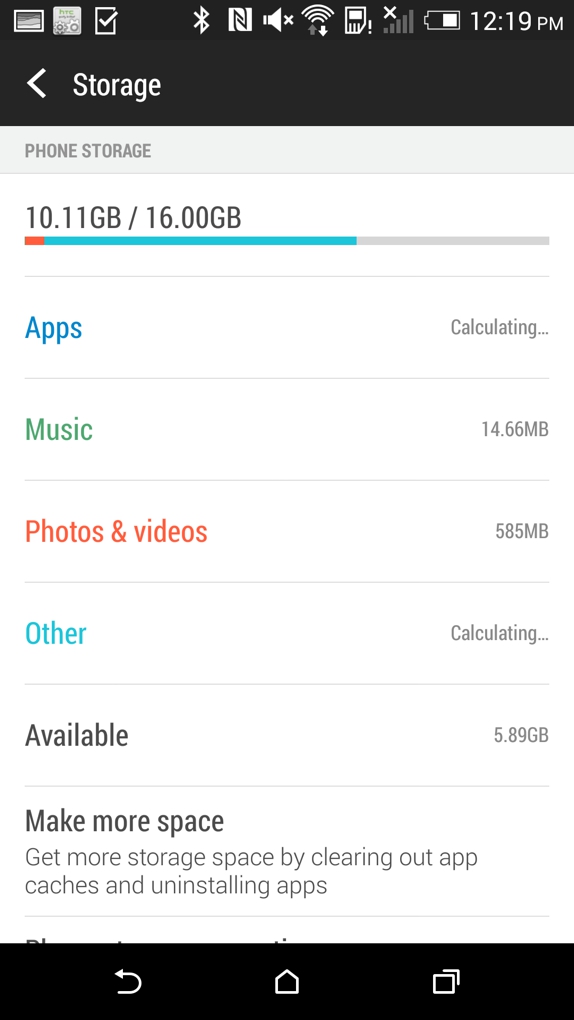 The battery is a 2400 mAh unit which manages to deliver above average longevity despite the lowly rating. We consistently got a full work day of use out of the Desire Eye and that’s with a fair amount of phone calls, multiple mail accounts syncing, browsing, extensive use of social networks and all of this in a rather poor network location which adds further strain on the battery. The HTC Desire Eye was down to about 15% battery life by the end of the work day and we find that to be acceptable though certainly not great.

The HTC Desire Eye is a step up for the Desire series. The hardware, both internal and external is touching flagship levels but this also puts it in a strange situation. The phone’s USP is the front facing camera which we found to be a wee bit shite. The rear camera too while decent enough, isn’t something to write home about. That said being waterproof certainly makes the phone ‘Desire-able’ to a degree! 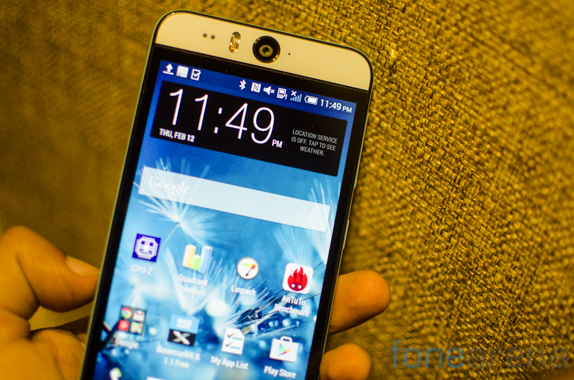 With pricing close to the HTC One M8, it becomes pretty hard to recommend the Desire Eye unless you really want a waterproof device. The poor performance of the front facing camera doesn’t make it enough of a reason to invest in the hardware. We’d recommend that you stick to the tried and tested HTC One M8 or perhaps the One M8 Eye which has a better build, a camera that is marginally better than the Desire Eye and is virtually guaranteed to have better software support. The Desire Eye is priced at close to Rs. 37,000.